Cell biologists have a variety of tricks up their sleeves when it comes to loading up cells with exogenous molecules, such as plasmid DNA or small interfering RNA (siRNA). The most popular options include chemical transfection reagents that ferry molecules into the cells using lipids or polymers; devices that use electricity to make cell membranes transiently porous; and viral delivery systems.

Choosing a delivery method typically boils down to a combination of the cell type being targeted, the class of molecule being delivered, and the transfection efficiency needed to answer the particular research question. “The method that people gravitate to the most is the simplest method, which is chemical transfection,” says Josh Snow, technical services manager at Wisconsin-based Mirus Bio, which sells a variety of transfection products.

By and large, conventional chemical and physical approaches to transfection cover the needs of most researchers using easy-to-transfect and...

Still others are working on completely new approaches for delivering not only nucleic acids but also additional types of materials such as small molecules and proteins. Here, The Scientist brings you the lowdown on some of the newest transfection and molecular-delivery products and methods. 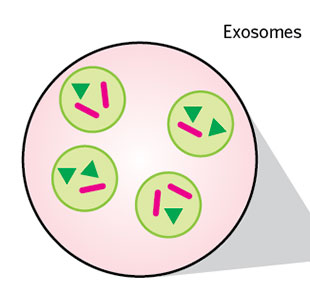 EXO-FECT: Isolated exosomes are transfected with nucleic acids of interest using the nonliposomal transfection reagent, Exo-Fect. Transfected exosomes are then added to cells, which internalize the vesicles along with their cargo.
See full infographic: JPG | PDFTHE SCIENTIST STAFFExo-Fect is a nonliposomal transfection reagent that initially delivers nucleic acids, including plasmid DNA, mRNA, microRNA, and siRNA, directly into isolated exosomes—naturally occurring extracellular vesicles that are shed from most cell types and are present in most bodily fluids. Exosomes are thought to function in intercellular communication; after they are released from cells, exosomes can fuse with distant cells or become internalized through endocytosis. Transfected exosomes can therefore serve as delivery vehicles for nucleic acids of interest. “You add the exosomes to cells, and they will deliver that cargo that you put in,” says Travis Antes, senior director of product development at System Biosciences.

To get started, users will first need to isolate exosomes, which can be accomplished by ultracentrifugation of cell-culture media or bodily fluids, or by using a commercial exosome-isolation kit available from multiple vendors including System Biosciences, Life Technologies, and others. Alternatively, researchers can purchase pre-isolated exosomes from System Biosciences. The transfection protocol is relatively straightforward: Mix isolated exosomes with the nucleic acid to be delivered and the Exo-Fect reagent, heat at 37 °C for 10 minutes, and then chill on ice for half an hour. Add a second reagent to precipitate the exosomes so that they can be separated from the transfection reagent and any untransfected nucleic acid. The entire procedure takes about 45 minutes to complete and requires roughly one million exosomes per transfection reaction, which should be sufficient for exosome-mediated delivery of molecules to cells in two wells of a six-well culture plate.

Cost
Kit costs range from $195 for 10 transfection reactions to $350 for 20 reactions. Exosome isolation kits start at $288, and a 50 mL bottle of exosome-depleted FBS sells for $153. The company also provides pre-isolated exosomes from a variety of sources starting at about $350 for a vial containing roughly one million exosomes. 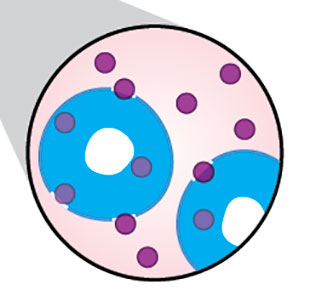 As the cells squeeze through the constrictions, transient pores form in the plasma membrane, allowing extracellular molecules to enter the cytoplasm by diffusion. The cell membrane then reseals within minutes. Disrupting the cell membrane in this way “doesn’t seem to have any long-term side effects on the cells,” says Armon Sharei, a postdoctoral fellow at Harvard Medical School who cofounded SQZ Biotechnologies with Robert Langer and Klavs Jensen of MIT. “So it looks like we just open up their membrane and they repair it after the stuff is in, and they don’t think anything of it,” adds Sharei.

The system has a pressure regulator that allows control of the speed with which the cells flow through the channels, and a pair of reservoirs that sit atop the chip and interface with its inlet and outlet holes. Users simply add their material to be transfected to a sample of cells in solution, deposit the mixture into the one of the interchangeable reservoirs, and apply pressure to begin pumping the sample through the device. Cells that have passed through the chip collect in the opposite reservoir, where they can be retrieved. It only takes about 5 seconds for a sample to flow through the system, Sharei says. 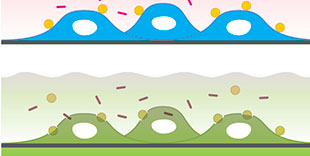 To speed up the process, Dag Heinemann, a postdoctoral fellow at the Laser Zentrum Hannover e.V. in Germany, and his colleagues first incubate their cells with gold nanoparticles that are roughly 200 nm in diameter. After about three hours, the particles settle onto the cells, and the researchers irradiate the sample with very brief pulses of a weakly focused green laser beam with a diameter of about 90 microns. The irradiation is performed in an automated device that the researchers developed in-house, complete with a microscope stage and software that automatically moves the culture plate around to quickly irradiate all or parts of the sample.

Upon absorbing the light, electrons in the gold particles oscillate rapidly and heat up. What happens next is not well understood, Heinemann says, but the end result is that the cells’ membranes become perforated. Using the technique, Heinemann’s team delivered siRNA and effectively knocked down a gene in a canine cancer cell line (PLoS One, 8:e58604, 2013). The team estimated that nearly 90 percent of the cells were transfected, and more than 80 percent of the cells remained viable after the treatment.

Cost
None available. But Heinemann expects that his device will be competitive with sophisticated electroporation systems, which typically retail for about $10,000 or more. 