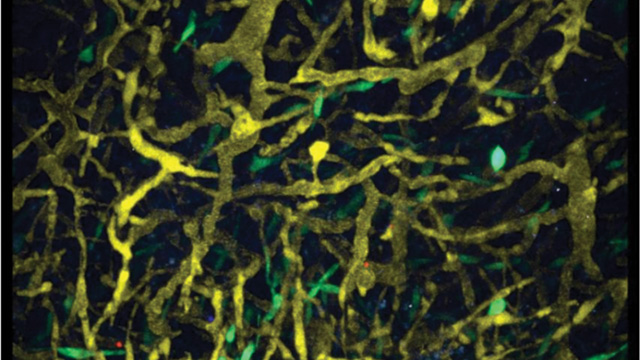 These days, cancer has a harder time hiding out. With modern imaging tools, inquiring researchers can ogle its every move, from a tumor’s growth to its inner workings to its effects on surrounding tissues.

“Imaging, I think, is made for cancer,” says Zaver Bhujwalla, director of the In Vivo Cellular Molecular Imaging Center at Johns Hopkins University School of Medicine in Baltimore. “You can study so many different aspects of cancer.”

For example, scientists can observe metastatic cells changing location in real time or watch for days and weeks as a tumor attracts new vasculature. Utilizing an abundance of tracers and reporter genes, researchers can visualize a cancer’s biochemistry, including its off-kilter metabolism. They can also monitor where a potential new cancer drug goes and what it does.

With techniques based on radioactivity, light, and sound, an important task for cancer researchers is...

Here, The Scientist takes a look at five imaging options for the cancer researcher, ranging from old standbys to up-and-coming technologies. Project
In collaboration with Jeremy Rich at the Clinic and Alex Huang at Case Western Reserve University, Lathia studies how cancer stem cells drive tumor growth. Using intravital microscopy to view human brain tumors implanted into mice, the team was able to observe what scientists had previously only inferred: that stem cells indeed build the tumor mass (PLoS ONE, 6:e24807, 2011).

Method
The researchers cut a window into the skulls of living mice and mounted a glass coverslip in the opening. They took multiple images of the brain over time, using blood vessels as a guide so they could line up their fluorescence microscope over the same spot for every picture.

Applications
Intravital microscopy offers a window into many types of cellular activities, such as different cell populations moving around in a tumor, cancer cells’ interactions with endothelial tissue, and their migration in and out of the bloodstream, in addition to cell division and growth. Intravital microscopy is best suited for observing a small area.

Machinery
Lathia recommends outfitting your system for two-photon microscopy, which can image deeper than a confocal. He started with a Leica Microsystems TCS SP5, then modified it to fit an anesthetized, warmed mouse; the whole setup costs approximately $500,000, he estimates. The Axio Examiner and Axio Zoom microscopes from Carl Zeiss Microscopy are also options. Zeiss product marketing manager Kristen Orlowski estimates the cost at $30,000–$70,000 for the microscope, light source, and objectives, but not recording devices or other components. Researchers can also use catheters and endoscopes to reach deeper into living animals with micron-level resolution, Achilefu notes.

Pros
• Users can image up to four colors of fluorescence at once.
• Real-time results or time-lapse studies in the same spot over days or weeks

Cons
• Limited depth penetration
• The resolution is not as good as standard confocal microscopy, Lathia says. THE SOUND OF CANCER: Lihong Wang of Washington University in St. Louis uses a photoacoustics set up like this one to image tumors and their vasculature to depths of 5 cm.
SONG HU, KONSTANTIN MASLOV, AND LIHONG WANG

Method
In short, “light goes in, sound comes out,” Wang says. Molecules absorb incoming pulses of laser light, which heat them up a tiny, harmless amount. This causes the molecules to expand, and that expansion generates sound waves. The advantage of photoacoustics, compared to regular optics, is that while light would be scattered on its way out of the tissue, sound takes a more direct path. That means the outgoing sound signal can come from deeper within the sample.

Applications
Imagers can observe tumors as well as their vasculature. Researchers can also use photoacoustics to image hemoglobin, gleaning information about blood flow and angiogenesis, or measuring the hypermetabolic state of cancerous tissue from hemoglobin’s oxygen load. “In theory photoacoustics can sense any molecule,” says Wang, who has used it to look at lipids, proteins, cytochrome c, nucleic acids, and even water. “It’s just a matter of finding the right wavelength.” At the surface of a sample, Wang can achieve spatial resolution of 200 nanometers, although at a depth of 5 centimeters that drops to 1-millimeter resolution.

Machinery
Depending on the application, a photoacoustic instrument can look like a standard microscope, a handheld ultrasound probe, or a boxy scanner. Vendors include Endra Inc. of Ann Arbor, Michigan, for which Wang chairs the advisory board, and VisualSonics of Toronto. The cost is roughly $300,000, Wang estimates.

Cons
• Air pockets such as the lungs, as well as thick bone such as skull, can block the acoustic signal.
• Because of the interference of air, researchers must use gel or liquid to link the detector and sample.

User
Laura Marcu, professor of biomedical engineering at the University of California, Davis

Project
Marcu is investigating the use of fluorescence lifetime microscopy (FLIM) to delineate the boundaries between brain tumors and healthy tissue during surgery (J Biomed Opt, 15:056022, 2010). Even though the cancer looks much like the surrounding tissue, differences in its metabolism and cellular structure show up with FLIM.

Method
Both autofluorescent and fluorescent dyes absorb light at one wavelength and emit at another, whose intensity is detected by a fluorescence microscope. FLIM instead measures the time delay between absorption and emission. For example, the delay changes, on the order of picoseconds, if a fluorophore is in a membrane versus an aqueous environment, or in a more- or less-acidic milieu. NADH is a useful autofluorescent molecule because it is an important metabolic player with altered activity in cancer cells. By measuring the time delay, Marcu can “see” the border between normal tissue and cancer, so surgeons can remove the bad but leave the good.

Applications
FLIM is best for small areas, and the detector must be close to the tissue, so Marcu developed a FLIM endoscope that can be inserted into the brain during surgery. FLIM also works with conventional microscope objectives, and can be useful for fluorescence resonance energy transfer (FRET) experiments, says Paul French, who is developing FLIM at Imperial College London.

Machinery
The key elements of a FLIM system are a picosecond-pulsing laser and a fast-gated, intensified cooled charge-coupled device (CCD), Marcu says. Becker & Hickl, in Berlin, offers a complete confocal system for approximately $200,000, or you can upgrade your microscope for FLIM for approximately $50,000.

Pros
• FLIM works with added fluorophores like green fluorescent protein (GFP) or with endogenous, autofluorescent molecules such as elastin and collagen.
• With probes like GFP, background is minimal, Marcu says.

Cons
• Can only image the surface of a tissue unless invasive surgery is used
• FLIM data require more experience to interpret than fluorescence intensity images, French notes.

Project
Wu is developing reporter genes, delivered by viruses, which will detect deadly prostate cancer metastases. The aim is to improve upon current methods, which can be invasive and imprecise. She puts the reporters under control of prostate cancer-specific promoters to light up the wandering cancer cells in mouse models (Cancer Res, 71:6250-60, 2011; Nat Med, 14:882-88, 2008). Bioluminescence is a quick, simple way to verify her ideas before moving into positron emission tomography (see below), which would be applicable in people.
Method

Wu uses an adenovirus to deliver a luciferase transgene. Injecting the substrate lights up the cancer, enabling Wu to track its growth and location.

Applications
Bioluminescence is usually used for whole-body imaging in living animals. (See “Track Your Package,” The Scientist, June 2011.) The technique can show scientists when a tumor grows, shrinks, or metastasizes. Because tissues scatter the emitted light, resolution depends on the depth of the cancer and brightness intensity of the bioluminescence. Under ideal conditions, usually at the surface of a sample, bioluminescence can detect single cells, says Anna Christensen, manager of in vivo technologies for Caliper, a PerkinElmer company that makes instruments to measure bioluminescence.

Machinery
The device used to measure the fluorescence is basically a “light-tight black box” with a CCD camera, Wu says. The cost ranges from $100,000–$550,000, depending on the features, says Christensen.

Pros
• High-throughput: the machine can image 3–5 mice at once.
• Background is low since only the luciferase-containing tissues will fluoresce.
• Sensitivity:  the technique can detect as few as 1,000 cells, Bhujwalla says.

Cons
• Requires a transgene to visualize a tumor mass, so not clinically viable.
• Given the scattering of light on its way out of tissues, the anatomy can be imprecise. Wu often finishes an experiment by dissecting the animal and re-imaging individual organs to confirm the light source. NEW USES FOR PET/CT: Researchers at UCSF, like those depicted here, use a PET/CT scanner to track the distribution of their therapy throughout cancer tissue.
ELIZABETH FALLl

Project
UCSF doctors have been refining a radionuclide therapy to treat neuroblastoma and related tumors, but they needed to know how much of the medicine would reach the tumors in patients. Seo used positron emission tomography (PET) combined with computed tomography (CT)—an old standby for finding tumors—to visualize the localization of an analog of the drug, which incorporates radioactive iodine, in mice (Med Phys, 37:4861-67, 2010). Eventually, doctors will use the same tool in patients to estimate the right dose.

Method
PET can image any radioactive isotope that emits positrons. But the resulting picture is missing most of the anatomy. It’s like the spots on weather maps that indicate where it will rain; they’re useless unless they’re overlaid on a state map. CT is a 3-D X-ray that provides the body’s equivalent of those states, allowing researchers to locate the tracer’s signal “more reliably and faithfully” among the organs, Seo explains.

Applications
PET/CT, for whole and partial body imaging, is the “gold standard” for identifying tumors in the clinic, Seo says. Doctors typically use a radioactive glucose analog to light up cancers, which, with their higher metabolism, take up more of the sugar than other tissues. “Now people are finding more applications,” Seo says, such as following drugs, rather than cancer.