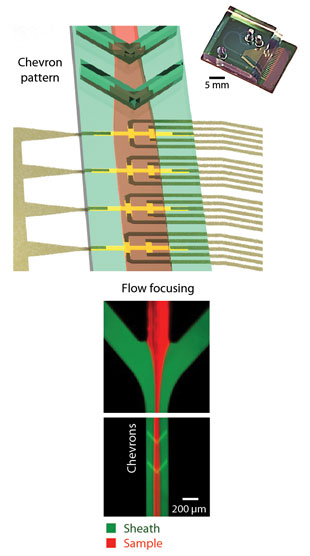 These instruments have had a profound impact on biological research. Yet there is much they cannot do. For instance, with some exceptions, they can only count or sort cells based on their protein content. Thus, researchers cannot easily use...

“For the most part, flow cytometry is used when you have a good affinity assay—an antibody or oligomer probe that can specifically label your cell type,” says Adam Abate, an assistant professor of bioengineering and therapeutic sciences at the University of California, San Francisco. “And that is a very small set of all possible assays you may want to do.”

These days, researchers are developing novel strategies to explore these possibilities. But they aren’t modifying traditional flow sorters to do so; they are downsizing their assays onto novel microfluidic devices. These miniaturized labs-on-a-chip enable investigators to enumerate and sort cells based on a wider range of physical and molecular properties than ever before, often without antibodies. The Scientist spoke with four researchers about the strategies they use for microfluidic cell sorting and evaluation.

A micro-Hall detector, Lee explains, records the magnetic field strength of an object—in this case, a cell studded with manganese-doped ferrite nanoparticles—based on the electrical current it induces. The device comprises a flow channel lined with eight micro-Hall detectors and structural features that force the cells towards the channel bottom (i.e., near the sensors). As the tagged cells flow down this channel, these sensors “ping,” Lee says, and counting those pings measures the CTC population. Because the strength of each ping “is proportional to the number of nanoparticles per cell,” the signal also indicates antigen abundance, the equivalent of measuring fluorescence intensity in flow cytometry.

But while fluorescence-based flow cytometry can detect multiple colors simultaneously, magnetic sensors are “gray-scale;” they can measure only one marker at a time. Lee’s team circumvented that problem by using nanoparticles of different sizes, each of which produces a distinct signal and in this way quantified three CTC biomarkers simultaneously. When applied to 20 blood samples from ovarian cancer patients, the system achieved a diagnostic accuracy of 94 percent.

SENSORS 2.0: Lee’s team has developed a separate device for CTC isolation that is based on cell size rather than on magnetism (Adv Healthcare Mater, 1:432-36, 2012). For cell counting, though, the team is migrating away from microfluidics and towards solid-state microchips, he says. “Controlling the cells such that they can fly over the [micro-Hall] sensors is very hard,” he explains. Lee envisions a two-dimensional sensor array that applies the micro-Hall principle but without the flowing liquid, like a digital camera for magnetic fields. “We can increase the number of sensors,” he says, “and the data-acquisition part could be automated.”

PROBLEM: Developing specific antibodies for bacteria that cannot be cultured

SOLUTION: As a postdoc in the Harvard University lab of  droplet-based microfluidics pioneer David Weitz, Abate codeveloped a device that could sort droplets according to their fluorescence intensity. Unlike traditional microfluidics, in which molecules and cells flow naked through channels, droplet-based devices encapsulate molecules or cells in uniform, picoliter-scale aqueous reaction chambers encased in oil.

To solve his uncultivable microbes problem, Abate adapted that design to sort cells based on their genetics—a process his team calls “genomic cytometry.” Microbiologists, Abate explains, often want to identify cells with particular skill sets, such as the ability to metabolize perchlorate, an environmental contaminant. But they have no easy way to pick them out. “With conventional FACS, it’s almost impossible to sort cells by nucleic acid content,” he says. PCR, in contrast, “is trivially scalable; all you have to do is change the primers and probes and you can change out which cells you’re targeting.”

His solution is PCR-activated cell sorting (PACS). Each droplet contains a single cell, PCR reagents, primers targeting the sequence of interest, and a fluorescent TaqMan probe. Successful amplification of the cellular DNA produces a fluorescent signal, which is detected in a microfluidic circuit that uses a laser to interrogate each droplet and then sorts based on the results. In a recent proof-of-principle experiment, Abate’s team sorted a heterogeneous population of E. coli that differed in the ability to synthesize the protein TolA, achieving 90-fold enrichment. (PLOS ONE, 10:e0113549, 2015)

TRY PCR + FACS: Researchers can duplicate his chip design, Abate says, but they’ll also need the microscope, software, lasers, and electronics to run it—an investment of at least $40,000, he estimates. An easier approach, he says, is to create the PCR droplet emulsion and sort those droplets in a FACS machine (Lab Chip, 13:4563- 72, 2013).  “There are commercially available droplet generators,” Abate notes. But you’ll need one capable of generating double emulsions, such as those from Dolomite Microfluidics. “FACS doesn’t work with oil,” he explains. “It requires a water droplet inside an oil droplet, suspended in water.” To the flow cytometer, “it looks like a cell.”

PROBLEM: Not every cell type has a known antigen that defines it. Plus, antibody binding may activate receptors, potentially changing the cell’s behavior.

SOLUTION: A physicist by training, Guck used laser beams in his graduate work to study the physical properties of cells. Not all cells are equally squishy, he found: while normal cells are relatively rigid, cancer cells are more pliable. “The more aggressive the cell, the softer it is, and that may be necessary for it to pass into tissues,” Guck explains.

He suspected it might be possible to sort otherwise identical cells based on this phenomenon—and to do so without antibodies. Some interesting cell types and cancers have no known unique molecular identifiers, Guck notes. But deformability is an “inherent property” of cells, enabling label-free cell analysis. “The cell cannot help but have that property.”

Researchers had already developed one approach called deformability cytometry (DC), in which flowing cells smash head on into a wall of flowing liquid, deforming like crash-test dummies. Using an ultrahigh-speed camera, the method monitors 1,000 cells/second, but only for a few seconds, as the size of the data sets quickly become unwieldy. For some rare cell types, that isn’t enough for statistically reliable numbers. And as the analysis isn’t in real time, sorting is out of the question.

Guck’s alternative is real-time deformability cytometry (RT-DC), a microfluidic method that is lower throughput, but instantaneous and continuous (Nat Methods, 12:199-202, 2015). “As the cell deforms, we analyze that before the next image is recorded,” Guck explains. “That means we can continuously analyze samples, [and] just build up data until we have enough.” Those cells theoretically could be sorted, he adds, assuming the team added the necessary circuitry.

RT-DC induces deformation by flowing cells into a narrow channel. Although the channel is wider than the cells, they deform because they “feel” the channel walls, Guck says. That causes the cell periphery to slow relative to its center, forming a bullet-like shape. Guck’s team quantifies that change by computing the ratio of cell area to cell circumference, a metric called circularity.

Using RT-DC, Guck’s team showed that CD34+ cells from peripheral blood and those from bone marrow—which cannot be distinguished using FACS—differ somewhat in deformability (the bone marrow cells are slightly squishier). Similarly, they were able to identify the different cell types in whole blood, no antibodies required.

DIY: Replicating the RT-DC device is possible, but neither straightforward nor trivial, Guck says. “You would need a very skilled postdoc,” not to mention the chips, the camera, the algorithm, and the syringe pumps required to assemble and operate the apparatus. He estimates a cost of “probably 100,000 euros, plus a microscope.” Members of Guck’s team are forming a company (ZellMechanik Dresden) to commercialize the method.

PROBLEM: Biofuels R&D requires identifying cells capable of specific carbon chemistries. But as these cells have yet to be cultured and studied, researchers have few if any molecular hooks for identifying and sorting them.

Raman spectroscopy captures a sample’s molecular fingerprint. When a specimen is illuminated with a laser beam of a specific wavelength, most of the light bounces back at that same wavelength, as with a mirror. A very small fraction, though, does not, reflecting the sample’s molecular composition. This is called Raman scattering.

Ma and Xu developed a microfluidic circuit and instrument that captures, holds, and interrogates single cells for anywhere from milliseconds to seconds, however long is necessary to acquire and interpret the Raman signal. “For most cells, it’s less than a second,” Xu says, and up to four cells per second is possible—a substantial improvement over previous efforts, which required up to three minutes per cell.

Cell signals are compared to a database of Raman signatures to identify positives. That, in turn, activates a suction-based sorting mechanism.

Xu and Ma used the system to sort a heterogeneous yeast population, only some of which produced carotenoids, producing an eight-fold enrichment. Now they are working to apply their system to such problems as identifying antibiotic-resistant bacteria, sorting stem cells, and selecting better biofuel producers.

USER ACCESS: According to Xu, two microfluidic RACS systems have been installed in China, and two more are in the works. A third is being installed at Oxford University. Users will be able to request time on any of these instruments, Xu says. “Any question is welcome. We have funding to support this kind of collaboration.” 