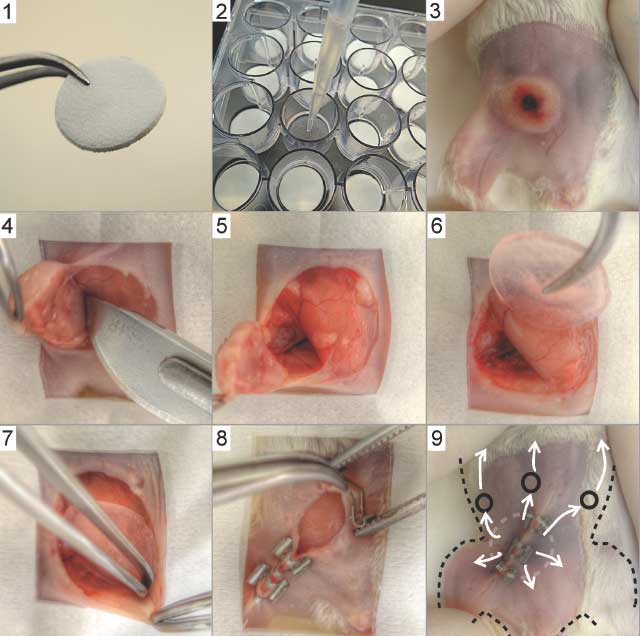 RIGHT SPOT AT RIGHT TIME: After removal of a mammary tumor from the breast of a mouse (3–4), a biocompatible gel scaffold loaded with T cells (1–2) is implanted at the resection site (6–9). There the scaffold acts as a reservoir, slowly releasing anticancer immune cells that attack residual tumor cells. (Black circles denote tumor-draining lymph nodes.)COURTESY MATTHIAS STEPHAN

Some immunotherapies harness specially engineered patient-specific cells to fight tumors and blood-borne cancers. But traditional intravenous methods of administering such therapies still struggle to deliver the treatment. The targeted immune cells are often lost—destroyed in the bloodstream or eradicated by the hostile tumor microenvironment before they’ve served their purpose.

Biodegradable polymers could provide a solution to such delivery problems. From enhancing the repair of damaged spinal discs to releasing antibiotics that prevent infection after surgery, clinicians have loaded these so-called scaffolds with drugs and then implanted them near the...

Scientists are also developing biocompatible scaffolds specifically designed to deliver tumor-reactive immune cells directly to a cancer site. These implants and gels create a safe local environment in which immune cells can proliferate precisely where needed, protected from factors secreted by the tumor cells themselves that hamper immune-cell function. Approaches can involve delivering T cells trained to attack a specific cancer or putting in place a dendritic cell–based vaccine that recruits and trains T cells in the lymph nodes. But creating a suitable scaffold that can be easily and effectively inserted into the patient poses material and bioengineering challenges. Generating a sufficiently large number of immune cells and ensuring that they do their job before the cancer does too much damage is also tricky.

The Scientist asked researchers who develop gel scaffolds for cancer immunotherapy how they’re approaching these challenges. Here’s what they said.

Problem: Only 5 percent of injected cancer-killing immune cells reach tumor sites in many clinical trials. Stephan wanted a tool that would deliver immune cells directly to the tumor site in the hope that these cells could shrink tumors to an operable size or clean up postsurgical malignant cells.

Project: Stephan and his colleagues engineered mouse T cells to have an affinity for certain molecules on murine mammary tumors, training them to recognize and attack these proteins. They then loaded these T cells into a biodegradable polysaccharide gel and surgically positioned it at breast tumor sites in the animals (Nature Biotechnol, 33:97-101, 2015).

The main challenge was creating a friendly environment for the T cells. “If you get Walgreen’s alginate wound dressing and load it with T cells, the T cells don’t like it,” says Stephan. He modified an alginate-based gel by adding peptides that mimic collagen fibers, along which lymphocytes migrate through the extracellular matrix. In addition to providing these “little handles to hold on to” so they could circulate properly within the gel, he also added stimulatory cues that tell the cells to proliferate and attack the tumor. So far, the approach has only been tested in animals, where the T cells expanded 10,000-fold after injection of the loaded gel scaffold at the tumor site and shrinking the mass within four days.

Pros/Cons: T cells infused into a patient’s bloodstream are often rendered dysfunctional by the time they reach the tumor site. In contrast, Stephan’s method directly delivers T cells to the cancer site. Because the delivery is localized, this treatment won’t work against widely disseminated tumors, or against blood cancers such as leukemia/lymphoma, and placing it requires surgery. But it offers a powerful option for attacking an inoperable tumor, or cleaning up postsurgical tumor cells that could lead to relapse.

Looking Forward: The researchers are developing a biopolymer method that can deliver either active T cells or vaccines that use dead tumor cells as sources of antigens. These antigens prime the immune system against remaining tumor cells. Additionally, commercialization of off-the-shelf T cells may lead to a marketable biopolymer implant loaded with “frozen cells ready-to-go.” 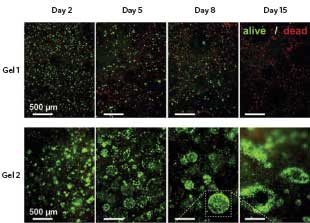 Problem: Immunotherapy treatment of cancers depends on multiplying tumor-killing cells to extremely high numbers—a costly and time-intensive procedure. Lerouge and Lapointe sought a way to reduce the number of cells required for treatment, and to deliver them without surgery.

Project: Lerouge and Lapointe developed an injectable, surgery-free scaffold consisting of a biodegradable polysaccharide mixed with gelling agents. To this mix they added activated T cells that had been isolated from patients’ tumors and dosed with growth-stimulating factors. The resulting solution was liquid at room temperature, facilitating injection, but at human body temperature it hardened to a hydrogel with pores large enough for T cells to escape from after they multiplied. “The main difficulty was finding the precise composition of the gelling agent to reach rapid gelation, good cohesion, biocompatibility, and macroporosity required for excellent T-cell growth,” says Lerouge (Biomaterials, 75:237-49, 2016).

Pros/Cons: Because it is a liquid at room temperature, the T cell–containing “thermogel” can be injected directly into the tumor environment without surgery. Most currently used immunotherapies inject T cells intravenously. Local delivery also means potentially fewer T cells are required—around 107 to 108, compared to the 1011 needed for intravenously delivered immunotherapy—so the treatment can be produced more quickly and carries less threat of the side effects inherent in systemic delivery.

Looking Forward: The researchers are testing the gel in mice and assessing its effects on isolated human cells. One challenge with T-cell therapy, Lapointe notes, is that suppressive signals from the tumor itself can prevent T cells from doing their job. Compounds that block these signals, such as checkpoint inhibitors, could be added to the gel along with the T cells to boost effectiveness, the duo says.

Problem: Preparing T cells outside the body for an infusion can be costly. Mooney wanted to find a way to train T cells in vivo while ensuring that the cells reach the desired tumor tissues.

Project: Mooney’s lab developed a vaccine composed of tumor antigens, cytokines, and oligonucleotide fragments that stimulates in situ dendritic cells to activate T cells resident in the lymph nodes. A polymer scaffold impregnated with the vaccine is surgically implanted under a mouse’s skin, imitating an infection site where dendritic cells are programmed to train cytotoxic T cells, which then travel to the tumor site and kill malignant cells (Science Transl Med, doi:10.1126/scitranslmed.3000359, 2009).

The researchers initially developed a surgically implantable polymer scaffold, loaded with vaccine components, that recruits and activates dendritic cells; these then disperse to lymph nodes to create sustained T-cell immunity. The team later redesigned the scaffold to have shape-memory properties so that it collapses in a needle and re-establishes its structure once injected (PNAS, 109:19590-95, 2012). Their most recent scaffold delivery approach is a solution of mesoporous silica microrods that spontaneously assemble when injected subcutaneously into a mouse’s flank. Like a pile of scattered matchsticks, they form a scaffold where immune cells can assemble, specialize, and grow. “As long as you have an antigen you can use as a vaccine, this system could be appropriate for a blood cancer,” explains Ali (Nature Biotechnol, 33:64-72, 2015). The original version (for melanoma) is currently the only biomaterial-delivered cancer vaccine in clinical trials (clinicaltrials.gov/ct2/show/NCT01753089).

Pros/Cons: Recruiting and activating endogenous dendritic cells to prime T-cell immunity is significantly cheaper than growing these cells outside the body in cell culture. Also, this approach is systemic, so it can potentially work against blood cancers. However, patients must have a robust immune system, which may be compromised by cancer.

Looking Forward: The lab is now developing more-potent and injectable versions of their immunotherapy technologies. 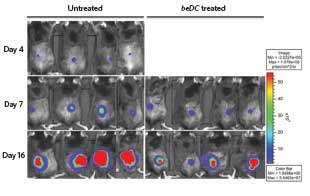 Problem: Secondary tumors that form after surgery generally grow faster and are more immunosuppressive than primary tumors. Verma and Rhee wanted to create an easily delivered therapy that would remain active under such immunosuppressive conditions. They also wanted a material whose shape could be easily manipulated and didn’t require extensive biochemical modification to incorporate dendritic cells.

Project: The researchers set out to develop a moldable scaffold. In a preliminary mouse study, the first material they tried was a polymerized fibrin. This US Food and Drug Administration–approved, blood clot–forming protein easily binds immune cells directly to the scaffold. “We never looked further because it worked so well,” says Verma.

To create the vaccine, they used the mouse’s tumor tissue (melanoma) to “educate” dendritic cells in a simple blood sample. The dendritic cells were then loaded onto the scaffold, which was surgically implanted to snake along the irregular shape of tumors without interfering with tumor monitoring. Thus positioned, the dendritic cells could recruit and train cancer-fighting T cells. The vaccine shrank the secondary tumors by 50 percent to 70 percent (Oncotarget, 7:39894-906, 2016).

Pros/Cons: The implant’s flat shape makes it easy to distinguish from tumor, and it is completely biodegradable. Like other locally implanted vaccines, it can induce a powerful immune reaction in the tumor vicinity. But the recipient’s immune system must be robust for the vaccine to work. It also requires surgery.

Future: Verma plans to generate an injectable version that can deliver the vaccine directly into lymph nodes inside or near the tumor. Here, T-cell education by the dendritic cells would happen right away because the two cell types would be in immediate contact. The team is also adding additional proteins to the scaffold that will help the vaccine remain active longer.