Geneticists tend to crowd around a few favorite organisms that have long histories in research and a wealth of practiced protocols for manipulating their genes. But those organisms aren’t always the best choice to answer a scientific question, leading some researchers to use other, less popular models. Organisms from elsewhere across the tree of life might offer unique genetic structures, physiology closer to that of humans, or faster generation times to accelerate investigations into gene regulation, evolution, and development.

Historically, given the lack of detailed gene-linkage maps and extensive mutant libraries for such organisms, progress with little-used models was frustratingly slow. But the advent of genomics and transcriptomics has created a “democratization” of model systems, says John (Jack) Werren, an evolutionary geneticist at the University of Rochester in New York.

“Once you have the genomic information, then you can target genes much more efficiently,” says Werren. Researchers can...

Working with up-and-coming models still has its downsides. Some are used only by a dozen or so labs, which means it takes longer to adapt new technologies such as CRISPR editing. Nonetheless, many scientists are happy with model organisms that strut the runway less traveled. Here, The Scientist profiles four such models and their potential for discovery. 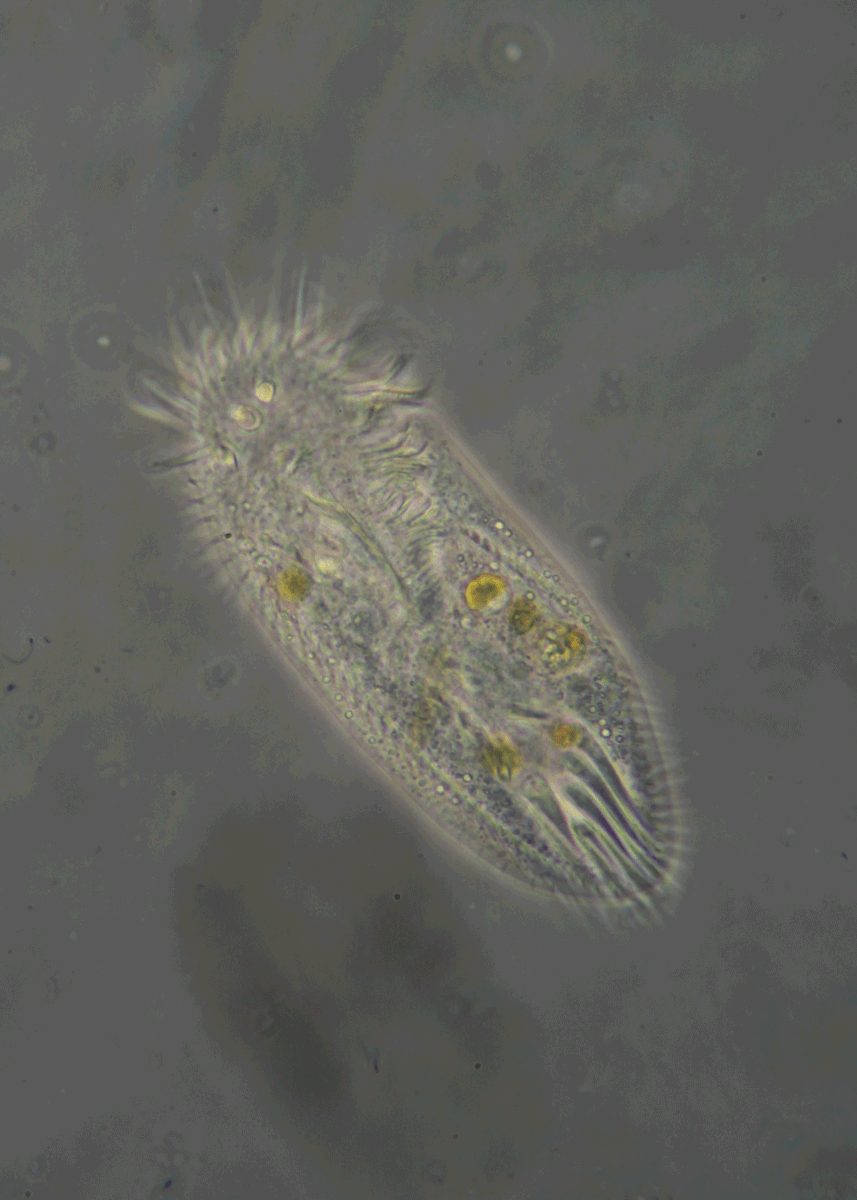 O. trifallax, like other ciliated protozoans, has more than one nucleus, and it organizes its multiple genomes in an extraordinary way. The macronucleus holds the working genome that carries the genes the organism needs for everyday living and keeps them ready for transcription. The micronuclei, of which O. trifallax has two, act as silent archives, storing the entire genome.

The catch is that the archival genomes are messy, probably because active transposons leap about, fragmenting and scattering genes as they go. No matter, because O. trifallax uses RNA guides to put those genes back together into a new working nucleus for each daughter cell after sexual reproduction. In a way, O. trifallax is like a multicellular organism within one membrane: the archival nuclei, accessed during sexual reproduction, mirror the germline, while the working nucleus acts like the nucleus of somatic cells.

Each archival nucleus contains about 120 chromosomes in a diploid arrangement, says Laura Landweber, a molecular evolutionary biologist at Columbia University who, with colleagues, assembled O. trifallax’s genome sequence in 2014 (Cell, 158:P1187–98). The working nucleus, on the other hand, contains about 18,000 distinct types of chromosomes, at Landweber’s latest estimate, up from the 16,000 she reported in 2013 (PLOS Biol, 11:e1001473). With an average copy number of 2,000 per chromosome type, that’s 36 million chromosomes total. Each macronucleus chromosome typically holds one gene, with lengths ranging from 469 base pairs to 66 kilobases.

When foods such as algae are plentiful, O. trifallax reproduces asexually. The archival nuclei divide by mitosis, while the working nucleus divides its chromosome complement in half. In the lab, the organism can double twice a day.

Under stressful conditions, such as starvation, O. trifallax gets frisky. The organism comes in a handful of mating types—the exact number isn’t known—and must find a compatible type for conjugation. Two complementary cells fuse, swap genetic material from their archival nuclei, then split again. The old working nucleus in each cell dissolves, and a new one is assembled from the archival genomes.

Researchers can create artificial chromosomes to add genes to the working nucleus and study chromosome dynamics. RNAi works too, with injections of short interfering RNAs reducing the production of corresponding proteins. O. trifallax has its own CRISPR-like genome-editing system that scientists can used to knock out or modify genes. Inserting nucleic acids to make these genomic changes is easily accomplished by microinjection, because the organisms are relatively large at 100 microns across.

Labs share O. trifallax strains with one another; Landweber’s group possesses a handful of wild-type strains, and dozens of genetically engineered lab strains.

Landweber longs to do large-scale genetic screens, to transform O. trifallax cultures with an entire library of genes, for example. However, to do so requires protocols that would make it easy to generate many transformants at once. With microinjection, such large screens are currently impractical. 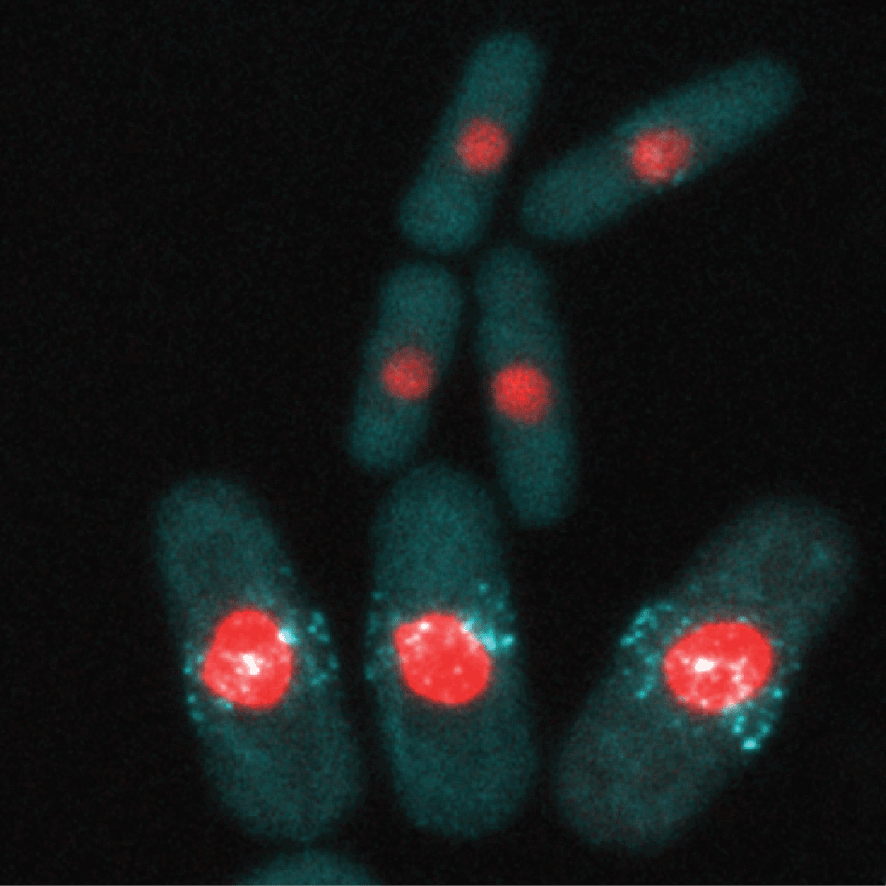 Claim to fame: A popular cousin

S. japonicus is related to one of geneticists’ favorite organisms, the yeast S. pombe. “There’s a huge discovery potential in pairing the species,” says Snezhana Oliferenko, a cell biologist at King’s College London and the Francis Crick Institute. For example, if Oliferenko thinks she understands some pathway in one yeast species, she reconstitutes that pathway in the other species. If it works, she’s on the right track.

Differences between the two yeast species has also led to new insights. While S. pombe keeps its nuclear envelope during mitosis, S. japonicus breaks it open. That means the S. pombe envelope must grow. By comparing the membrane synthesis pathways in each organism, Oliferenko determined a key phosphorylation event that only S. pombe can perform (Curr Biol, 26:P237–43, 2016).

S. japonicus can reproduce asexually, doubling every two hours, or sexually. To control remixing of genes, researchers in Japan isolated mutants of two different mating types (Yeast, 26:221–33, 2009). By mating those types together and dissecting the resulting spores, researchers can obtain the genotypes they desire within about five days.

Researchers use electroporation to transform S. japonicus and knock genes in or out (Cold Spring Harbor Protoc, doi:10.1101/pdb.prot091850, 2017). Scientists can also overexpress genes or use homologous recombination for gene editing.

Oliferenko’s lab is one of the best sources; it has about 4,000 strains on hand.

So far, Oliferenko says she hasn’t had much success forcing S. japonicus into a diploid state—something researchers reported doing back in 2011 (Yeast, 28:747–54). In other yeasts where this approach is well established, geneticists can use this strategy to identify essential genes: scientists knock out one copy of a gene from a diploid organism, and if half the haploid spores don’t survive, then that gene was essential. If researchers try to knock out an essential gene in haploid-only S. japonicus, they simply won’t get any surviving transformants—and they won’t know whether the gene was required, or whether the transformation just failed. 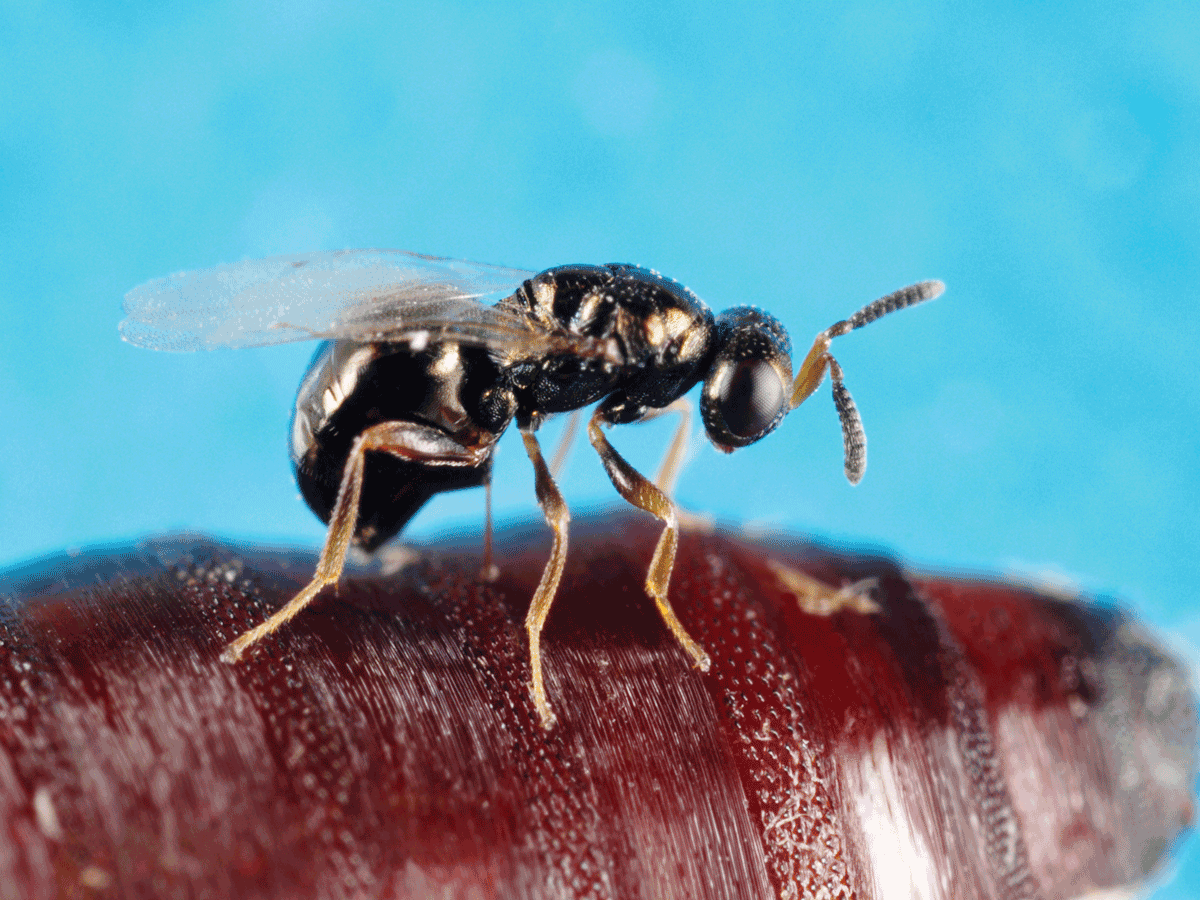 In the tiny jewel wasps, genus Nasonia, haploid males hatch from unfertilized eggs and diploid females from fertilized ones. That means it’s an animal model with whole-organism haploid genetics, which can simplify analyses. For example, researchers can mutagenize males and easily identify recessive mutations, given that there’s no homologous gene to mask a phenotype of interest.

Because the species has evolved to allow somatic-cell haploidy, there are few deleterious recessive genes lurking in the genome. That makes it easier to create inbred lines, which simplifies genome assembly.

N. vitripennis is the most popular species, but there are three others under study. They can be crossbred to study the genes that make each species unique. All are about two millimeters long, don’t sting people, and rarely fly, making them easy to handle.

Jewel wasps are easy to grow and mate; one mating yields hundreds of offspring within two weeks. The different species will interbreed so long as researchers use antibiotics to cure them of a Wolbachia infection that prevents hybridization.

Nasonia can be transformed by injection of genetic material, and it’s easy to create knockdowns via RNAi, says Werren. CRISPR has also been done.

Researchers have collected wildtype strains from diverse parts of Europe and North America. There are also strains in which a wasp has a large fragment of the genome from another species. Some basic strains are sold by Carolina Biological Supply and Ward’s Science. Werren and others distribute more-specialized lines. He estimates that about 100 strains are available.

Researchers will also need host insects, such as blowflies, which can be bought from biological suppliers or, in Europe, bait shops.

Both transformation and CRISPR still need to be optimized in Nasonia for better efficiency, says Werren. 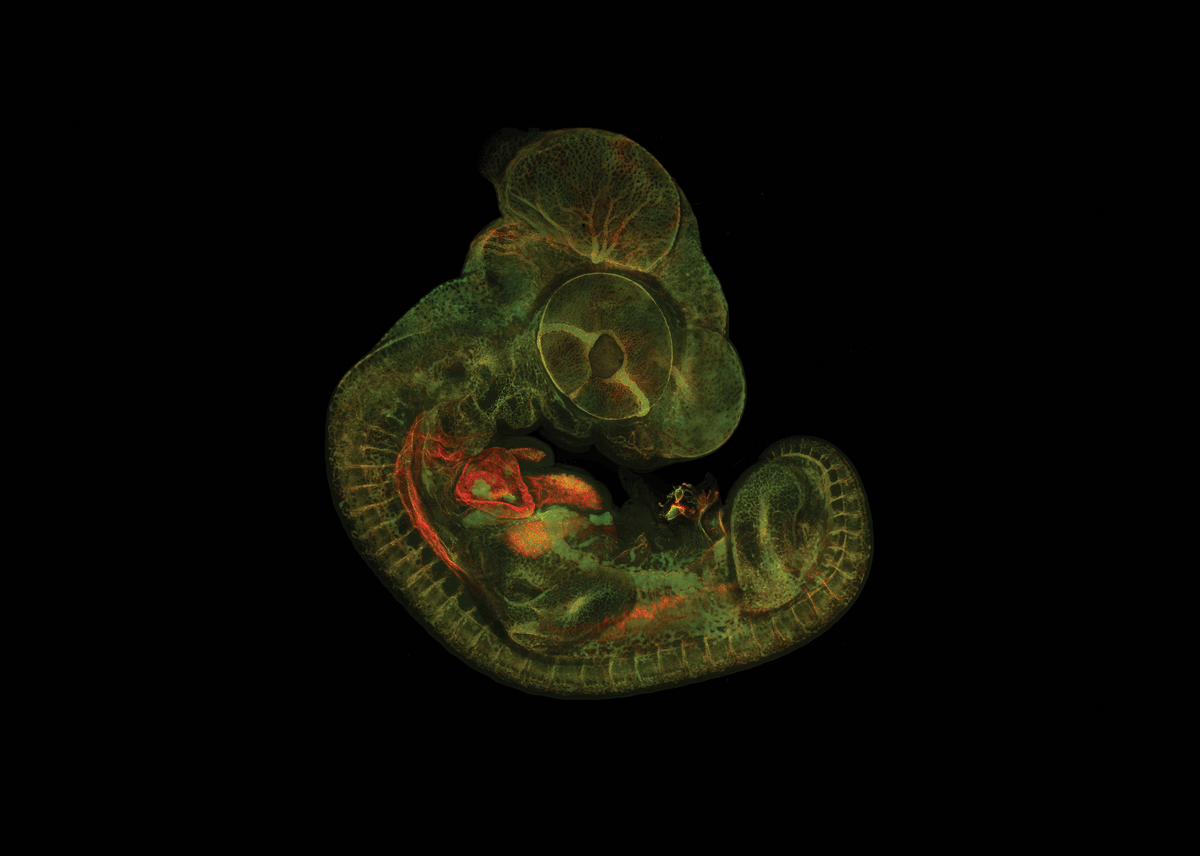 Birds provide a convenient model for developmental studies. They have four limbs, four-chambered hearts, and other characteristics they share with mammals. But the embryos—being separate from the mother’s body—are much more accessible. While chickens are popular, they take months to mature. The Japanese quail, Coturnix coturnix japonica, weighs in at 5–9 ounces, matures faster, and is “basically a mouse with wings,” says Rusty Lansford, a developmental biologist at the University of Southern California and Children’s Hospital Los Angeles.

Quail (and chickens) have a diploid set of 39 chromosome pairs. Eight pairs and one sex chromosome are large, ranging in size from 27 to 176 kilobases; the rest are much smaller. Until recently, quail aficionados had to rely on the chicken genome, which shares 99 percent of the quail’s genome. Now, a quail sequence is available (Genomics, 101:345–53, 2013; GigaScience, 7:giy049, 2018) This has facilitated precision both in labeling genetic elements for imaging and in genetic engineering, says Lansford.

Quail mature within two months, much faster than the five to six months it takes chickens. While artificial insemination is possible, natural mating is more effective. Females can lay about 250 eggs per year, and the eggs hatch in 16–17 days. Quail can’t be inbred for too long; after about five generations, they start to sicken.

Researchers can transform embryonic cells with DNA or RNA by electroporation (JoVE, 148:59664, 2019). CRISPR editing, RNA interference, and morpholinos all work.

Lansford estimates that there are about a dozen transgenic lines that carry specific genetic markers. They can be shipped as eggs from research labs. Scientists can also obtain wildtype eggs from commercial quail farmers.

For now, strains must be maintained via ongoing generations of birds. Lansford says it is not yet efficient to freeze germ cells or gonads for later thawing and production of living birds. Lansford is collaborating with the Frozen Zoo at the San Diego Zoo’s Institute for Conservation Research to figure out the process.