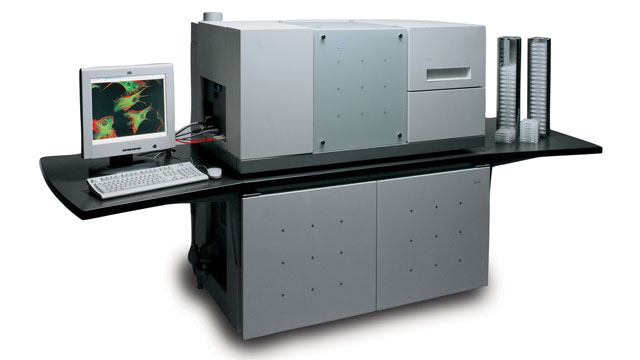 THE OPERA: a high-content screening system from PerkinElmerCOURTESY OF PERKINELMER

Whether you’re measuring shape-shifting in a single dish of cells or treating a multiwell plate of them with thousands of different compounds to identify drug targets, analyzing a single readout of biological activity probably won’t give you the whole story. One way of assessing multiple features of a cell or small organism is to use high-content screening (HCS) microscope systems, which let you automate image acquisition and analysis. “This area has and is going to have a big effect on how we start to understand biology” following new genetics and genomics findings, says Ann Hoffman, a senior principal scientist in the imaging department of Roche Discovery Technologies at Hoffmann-La Roche in Nutley, New Jersey.

Dedicated HCS microscopes have been around for at least a decade. But a flurry of faster and more sensitive cameras, and of better light...

The Scientist brings you the lowdown on some of the major HCS systems on the market.

The Opera is a laser-based spinning-disk confocal system that has been sold since 2002. Earlier this year, it got a makeover that included an easier-to-use software interface, additional analysis features, faster data processing, and transmitted-light options.

Because of its high throughput, Opera is geared primarily towards large academic core facilities and industry drug-discovery labs. “For a typical 3-color assay, where you would take one field of view, the Opera can take up to 100,000 compound (or well) images per day,” says Jacob Tesdorpf, director of High Content Instruments and Applications at PerkinElmer.

Cons:
• The instrument’s software takes a while to master, in part because most users are doing specialized assays. Once you become familiar with running the instrument, navigating the controls is easy, and your setup can be saved and tweaked later, says Jarkko Ylanko, a research technician in Andrews’s lab.
• Physical size—the instrument is about the size of a small refrigerator turned on its side—might be an issue for some labs.

Learning curve: “If all you want to do is run a standard type of assay, you can probably get to that point in the 3 days we do the training,” Tesdorpf says. Customized assays will take longer.

A benchtop system that’s about the size of a personal copy machine, the Operetta was released in 2009 and is geared for smaller academic screening labs. It’s also used in industry. “We use the Operetta in many cases as a backup for assay development for our Operas,” says Hoffman.

Pros:
• Very user-friendly, says Brian Reid, director of the High Throughput and High Content Screening Core Facility at the
University of Colorado Denver. Hoffman agrees, noting that a summer intern with no HCS experience learned to run samples and analyze data in just two weeks.
• Comes with LED for transmitted (label-free) imaging.
• Reasonably priced. In the end, Reid’s decision came down to price, and the system offered “the best bang for the buck,” he says.

Cons:
• The brightness of the system’s main light source, a xenon lamp, can fade over time. On the other hand, you should have controls on each plate that account for any variability in illumination, says Reid. “And I haven’t seen any variability in the lamp at all.”
• Confocal ability does not come standard, though you can pay extra for a spinning disk.
• Integrating a third-party, off-the-shelf plate handling system is not straightforward, says Reid. PerkinElmer’s plate stacking and handling systems start at $60,000, says Tesdorpf.

Launched in 2005, the ImageXpress Micro Widefield System, a popular choice for academic core facilities of all sizes, has undergone numerous small improvements, including software updates and the addition of options such as environmental control and fluidics.

Pros:
• The standard model is robust and reliable, says Andreas Kaufmann of the Light Microscopy and Screening Center at ETH Zurich. His facility owns four of them. Scott Martin, of the National Institutes of Health Chemical Genomics Center—which recently upgraded from a Standard to an XL—agrees. “The thing just keeps going,” he says.
• The XL’s 3-fold increase in image size means you need fewer pictures to capture a whole well.
• Performs both laser- and image-based autofocus. (Although there are some exceptions, laser-based is faster, but image-based is better for irregular specimens or plates.)

Cons:
• Slower automated changes in filters (for filtering excitation or emission light) than in other instruments. The instrument’s filter cube takes 100 milliseconds or longer to change, says Kaufmann. In contrast, filter wheels (used by other machines) take 50 ms, he says. The extra time adds up when you’re doing a large screening job.
• Unlike other widefield systems, the Widefield Micro does not offer a spinning-disk option. You can pay extra for confocal software, however; and Molecular Devices sells a dedicated laser-based confocal HCS system called the ImageXpress Ultra Confocal High Content Screening System.
• Larger images mean more data to store, which can be a limiting factor for some labs, notes Martin.

Learning curve: It takes 1 to 2 hours to train a beginner to run an assay on either Micro model, Chandy notes—but they can run the instrument by themselves after this time, Kaufmann says.

A WINNER: This image of a myoblast stained for DNA (blue), myosin heavy chain (green) and methylated histone H4 (red) was one of three winners of the 2011 IN Cell Analyzer Competition.COURTESY OF GE HEALTHCAREA widefield benchtop system, the IN Cell Analyzer 2000 came out in 2009. Its optics are completely different from those of its predecessor, the 1000, which is no longer sold.

The new optical design gives scientists some flexibility in their choice of cameras: users can pick a standard 2-megapixel CCD or a 5-megapixel high-resolution camera, says Nick Thomas, a principal scientist in the Cell Technologies division of GE Healthcare in Cardiff, Wales. Researchers can also choose an image analysis software package, from “level 1,” which covers the most common applications, to “level 3,” which allows users to set up their own protocols by linking together libraries of different routines. In July, the company updated the 2000’s operating software to speed image acquisition and expand compatibility with plates and arrays.

A more advanced model, the IN Cell Analyzer 6000 (see table), differs from other confocals in that its software allows users to precisely control illumination and detection to allow for widefield or confocal imaging.

Pros:
•Good image quality, fast. “We can acquire 384 dual-color images in 24 minutes and analyze them in another 8 minutes,” notes Hakim Djaballah, director of a high-throughput drug screening facility at Memorial Sloan-Kettering Cancer Center in New York City. Djaballah is using the system to screen 3-D clusters of cells in 384-well plates.
• “The instrument itself is very user-friendly and easy to operate,” Djaballah says, adding that it takes a few minutes to set up its software and start taking images.

Learning curve: It takes a couple of hours to get trained on image acquisition, Thomas says. The company provides 1 to 2 days of training individualized to a user’s particular assay. 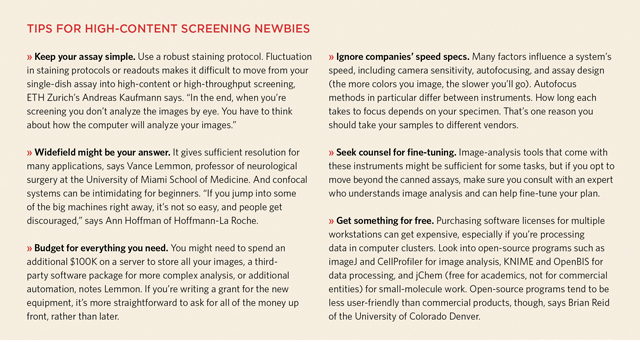 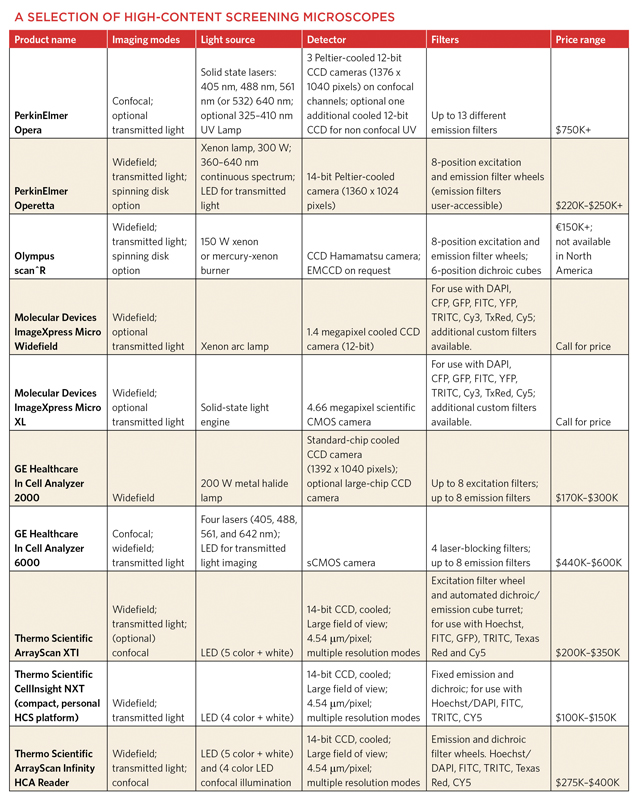 Correction (December 12, 2012): David Andrews is no longer a professor of biochemistry and biomedical sciences at McMaster University in Ontario. He now works as the director of physical sciences at Sunnybrook Research Institute. The Scientist regrets the error.