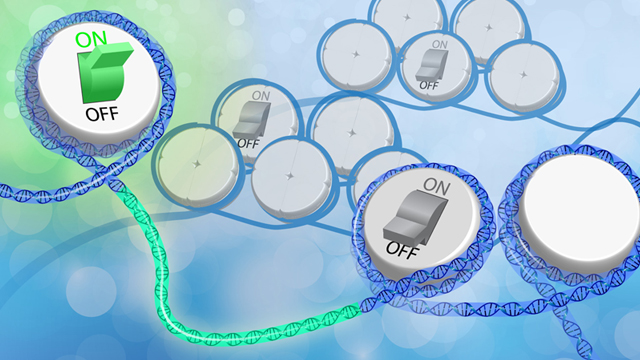 Chemical groups tacked onto DNA or histone proteins regulate how and when genes are expressed. Environmental signals can change the placement of these epigenetic tags, but researchers have had trouble pinning down how phenomena such as diet, inflammation, or social stress are converted into instructions that tweak gene functions.

Researchers have known for decades how some aspects of metabolism can wield epigenetic effects: breakdown products formed during sugar or protein digestion, for example, can be converted into chemical tags that epigenetically modify DNA or histones. But even a process as fundamental as turning glucose into cellular fuel can occur via distinct pathways that dynamically change based on a cell’s immediate environment and state. So a cancer cell and a healthy one might digest sugars in distinct ways—and thus have different metabolites available for making epigenetic marks.

Knowing which metabolites can regulate gene function—and whether they do...

Also, recent research has revealed connections between aberrant metabolism and epigenetic changes in cancer cells, leading scientists to examine whether metabolic changes may be driving epigenetic ones. “These are two fields that operated independently for years,” says Jason Locasale, a cancer researcher at Duke University. “In the last 10 years, a confluence of different observations of altered metabolism in cancer cells and developmental biology has led to many of these new studies.”

Here, The Scientist surveys the landscape of research aimed at understanding how metabolites drive epigenetic changes.

Problem: Cells typically digest sugars by breaking them down into carbon dioxide and water in the presence of oxygen. But cancer cells and activated T cells funnel glucose down different pathways. One of these is aerobic glycolysis, in which glucose gets converted to the 3-carbon lactate molecule that’s typically produced during anaerobic processes, even in the presence of oxygen. Although this digestion is a hallmark of activated T cells and is known to influence the expression of pro-inflammatory genes, precisely why those cells employ this metabolic route—and how it controls gene expression—isn’t well understood.

Study: Li and his colleagues generated mouse lines with T cells deficient in lactate dehydrogenase A (LDHA), an enzyme that catalyzes one of the key steps in aerobic glycolysis. Mutant helper T cells consumed approximately 70 percent less glucose than wildtype cells did and expressed lower levels of interferon gamma (IFNγ), a cytokine crucial to helper T-cell function. In a previous study, researchers reported that blocking aerobic glycolysis increased binding of another enzyme to IFNγ mRNA transcripts at the 3' untranslated region (UTR), thus decreasing translation of the gene. But when Li’s team deleted the 3' UTR, inhibiting aerobic glycolysis still reduced expression of IFNγ. LDHA did not exert its effects at the translational stage, but rather facilitated the gene’s transcription.

Seeking an alternate link between the gene’s expression and sugar metabolism, the team turned to chromatin immunoprecipitation (ChIP-Seq) and found that wildtype and LDHA knockout cells had different histone acetylation and gene expression patterns. (Histone acetylation furthers gene expression by rendering DNA more accessible to transcription factors.) In the knockouts, 86 percent of downregulated genes, including IFNγ, showed reduced histone acetylation. When LDHA drives the energy-producing process of aerobic glycolysis, mitochondria—which would normally fuel a cell’s activities—can dial down respiration and instead export citrate to produce acetyl-CoA, a cofactor that’s needed to acetylate histone proteins. Supplementing cells with acetate restored histone acetylation and IFNγ expression, suggesting that aerobic glycolysis controls interferon expression via an epigenetic mechanism (Science, 354:481-84, 2016). Now, the team is looking for other inflammatory cytokines that might be similarly regulated. “IFNγ was a clean model to use to differentiate epigenetic gene regulation from translational mechanisms,” Li says.

Approach: When trying to elucidate a metabolite’s role in an epigenetic effect, look for specific changes such as DNA methylation or histone acetylation, then search for metabolic pathways that might produce the ingredients needed to make these marks, Li suggests.

Problem: Primary tumors and metastatic cells in pancreatic ductal adenocarcinoma—the most common form of pancreatic cancer—are genetically similar to each other. But metastatic cells lodge in environments that are richer in nutrients than the primary tumor’s niche, and grow in distinctly different ways. The genetic controls that enable the spread and growth of metastatic cells are unclear. But these cells show signs of demethylation across large swaths of their genome, suggesting an epigenetic mechanism at work. After spending a year knocking down assorted chromatin-modifying machinery in mouse tumors with no results, McDonald’s team devised an alternate hypothesis: that such large epigenetic changes were regulated by equally large changes in metabolism.

In the last 10 years, a confluence of different observations of altered metabolism in cancer cells and developmental biology has led to many of these new studies.—Jason Locasale, Duke University

Study: In a study led by Feinberg and Iacobuzio-Donahue, researchers compared paired samples from primary and metastatic human tumors for methylated histone proteins. They found that metastatic cells from distant sites such as liver and lung carried distinct methylation and acetylation marks on their histones. Unlike primary tumors, which can supplement or replace glucose with various “alternative fuels,” metastatic cells rely heavily on glucose consumption to form tumors. So the researchers used liquid chromatography and high-resolution mass spectrometry to track which metabolic pathways the sugars followed in metastases. Then they looked for steps in those pathways on which the cancer cells might be most dependent. Surveying metabolite profiles across tumors, the team found that distant metastatic cells had strikingly low levels of one chemical, known as 6-phosphogluconic acid (6PG), made during glucose digestion. 6PG is broken down further by an enzyme known as 6-phosphogluconate dehydrogenase (PGD), suggesting that the enzyme was overactive and had consumed all its substrate (Nat Genet, 49:367–76, 2017).

Knocking out the PGD gene did not change the expression of other enzymes in the same pathway, but it reversed changes to chromatin methylation and acetylation in distant metastatic cells. Inhibiting this enzyme blocked tumor formation in 3-D cultures. So PGD might act as a nutrient-sensing mechanism: by constantly chowing down on 6PG, it forces cells to consume more glucose. Then, cells can deploy the excess metabolites produced by digesting glucose to acetylate or demethylate histones in chromatin regions needed by malignant cells to form tumors, causing the large-scale epigenetic changes seen in metastatic growths. “We don’t know how [the PGD signal is] targeted to these sites yet,” McDonald says. “It could be through transcription factors that are pre-bound to these regions.” When the researchers knocked down PGD in tumor-forming cells in experimental assays, primary tumor cells still grew, but metastatic cell growth stalled.

Approach: McDonald relies on manually sifting through data to find links between metabolite levels and chromatin changes. Large chromatin domains such as those altered in metastatic pancreatic cancer can appear as hundreds of different signals, and metabolite levels can change because of many different cellular pathways. Glucose, for example, could be digested by any one of several routes, and each would produce different intermediates. “So bioinformatics programs might not detect all interesting changes,” McDonald says. “Hand-graphing metabolite data into spreadsheets is what led us to PGD, because it was wiped out across several different samples.”

For those without the means to manually analyze such large datasets, McDonald suggests finding metabolite patterns that are likely to be relevant to the disease being studied, then working with a bioinformatician to tailor algorithms so they reflect the biology at hand.

Study: Methionine is an essential amino acid, meaning that it must be supplied by dietary proteins. Among other functions, it’s required to make S-adenosylmethionine (SAM), a molecule that helps to methylate DNA and histones. Locasale began studying methionine metabolism as a way to understand how cells sensed metabolic changes and whether they could communicate that information to chromatin. In a recent study, the team reported that SIRT1, a highly conserved mammalian enzyme that regulates methionine metabolism in mouse embryonic stem cells, could also tweak epigenetic markers that control differentiation. When the researchers deleted or knocked out SIRT1 in mouse embryonic stem cells, mutant cells had high levels of methionine but low levels of SAM—and consequently, many histone methylation marks were lost, leading to a loss of pluripotency. But other SIRT1 activities were unaffected. The team suggested that stem cells lost pluripotency because the enzyme that converts methionine to SAM is controlled by SIRT1 (EMBO J, 36:3175–93, 2017). “We knew that SAM and acetyl-CoA interact with chromatin via enzymes to establish these epigenetic modifications, but the extent to which it happened and how wasn’t resolved,” Locasale says.

Approach: To study which amino acid metabolic pathways were affected by knocking SIRT1 out, Locasale’s team turned to high-resolution mass spectroscopy, which allowed the researchers to measure the concentrations of hundreds of metabolites in less than an hour. Then, they applied an algorithm to the data that compared metabolites from the experiment to a standardized library of metabolites to infer how nutrients flowed from one metabolic pathway to another. They put the data from a mass spectroscopy run to work in many ways: to measure all the metabolites that reacted with chromatin at a given time point, to identify all the metabolites that were responsive to changes in methionine levels, and to measure how much variation in metabolism contributed to chromatin changes. “When we have this level of detail [on metabolite fluxes], we can quickly test hypotheses and generate alternate possibilities as needed,” Locasale says. “Ten years ago, this sort of work would have taken a lot more time and effort.”

Clarification (January 8): Sections titled "Cancer Chemistry" and "Stem Cell Stability" have been modified to more clearly describe the contributions of authors on the studies referenced in the text.