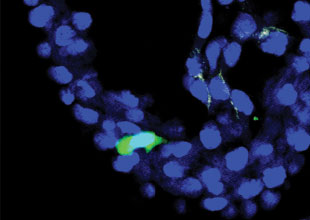 HOMING IN ON THE HEART: Using a line of Brainbow mice created for developmental biology studies, researchers label individual cells (green) in the 9.5-day-old mouse embryo. (Blue is a general cell stain, for reference.) A clearing protocol adapted for embryos allows deeper imaging, including zeroing in on the heart as shown here.MINGFU WUThe average human is made up of more than 30 trillion cells, not counting the hefty microbiome he or she carries. Although mostly red blood cells, our bodies comprise about 200 different types of cells. Understanding how organisms grow from one cell type to many different cell types is the overall goal of lineage tracing or fate mapping experiments, the first of which date to the late 19th century.

Historically, cell lineage tracing studies have taken large pools of cells from mature tissues and inferred their origins retrospectively by staining the cells with...

Such techniques will enable scientists to answer long-standing questions in development. “What we are able to do now is look at the time in the embryo where people think [key developmental] decisions are occurring, and see what we see,” says Bertie Göttgens, a principle investigator at the Cambridge Stem Cell Institute in the U.K.

The Scientist spoke with the developers of four recent applications of single-cell lineage tracing experiments—examples that reflect the power biologists have in 2016 to answer fundamental questions about how tissues and organs form. Here’s what they said.

Project: Trabeculae are sheets of heart muscle cells that stretch across the inner surface of the heart’s ventricles and boost gas and nutrient exchange during development. It is impossible to survive without them. In a new study, Wu’s group examined how these cells first form, between embryonic days 9 to 10.5 in mice (Cell Rep, 15:158-70, 2016).

The scientists then stained the embryo with specific markers to identify cell populations. To address the challenge of imaging the heart—which is deep within the embryo—the team made it transparent by chemically stripping away the lipids, which cause light to scatter and limit imaging depth. More specifically, they adapted the so-called Scale method, first described in 2011 for clearing adult mouse brain. Clearing takes up to a week. The group demonstrated this protocol recently in the Journal of Visualized Experiments (doi:10.3791/54303, 2016).

Future: Wu’s newly adapted methods can be combined with CRISPR-Cas9 tools, he says. His group is now deleting or overexpressing genes in labeled cells. “This is a great tool to study gene function in a single cell,” he says.

One common complaint about using four-color Confetti to label single cells (in an animal) is that the cells express green fluorescent protein less often, or sometimes not at all, compared with cells that express each of the other three colors. And the reporter is also relatively insensitive, meaning a large dose of tamoxifen is needed to induce labeling in a single clone, he adds. Wu’s group is working on a more sensitive four-color reporter line, but until then, he also uses a two-color reporter mouse line called mTmG.

Project: Göttgens and his collaborators are working to solve a long-standing question in developmental biology: To what extent do blood vessel and heart lineages overlap, and when do they diverge? For the first time, Göttgens and his team followed the formation of a mammalian mesoderm—one of three germ layers that forms bone, muscle, and many other tissues—in a 7.5-day-old mouse embryo. In particular, they analyzed the transcripts of 1,205 single cells to answer how mesoderm lineages diversify during the developmental process of gastrulation (Nature, 535:289-93, 2016).

Approach: Very little specialized equipment was needed for this study—apart from access to a flow cytometer to isolate single cells. On the other hand, pulling off this study would not have been possible without an interdisciplinary team of scientists well-versed in developmental biology, genomics, and bioinformatics, Göttgens says.

On the development front, for example, biologists must be able to harvest embryos after the embryos have implanted into the uterine wall. This requires a trained eye. “You really need to know what you’re looking for, because it’s a tiny speck of white tissue embedded in a background of white tissue,” he says. Expertise is also required for staging the embryos.

The group deployed single-cell RNA sequencing, which has rapidly grown in popularity now that a handful of techniques are available. The research team elected to use a particularly sensitive variant called Smart-seq2, which generates full-length coverage of the cell’s transcriptome. (See “Scaling to Singles,” The Scientist, May 2016.) In parallel, they sequenced the transcriptomes of embryos missing a particular transcription factor crucial for blood cell development to validate their findings.

Tips: Göttgens suggests working with a bioinformatician to design the experiment from the outset to power the study with the right number of cells and to limit the potential influence of batch effects (in which two results differ because they were collected on different days).

Sorting technical noise from new biology is still a challenge. One way his group helped address this is by adding a standard set of reference mRNAs into their single cells (otherwise known as ERCC spike-ins).

The scientists used diffusion maps—a basic way to order snapshots of single cells along their developmental journey—but they plan to study developmental trajectories using a new algorithm called Wishbone, which uses single-cell RNA sequencing and mass cytometry data to specifically model branching steps during cell differentiation (Nat Biotechnol, 34:637-45, 2016). Although Göttgens admits that single-cell transcriptomics is in need of more data-analysis tools, he urges newcomers to dig in to lineage tracing anyway. “If someone wants to do it, they can start now,” he says. “There’s no point in waiting.”

FATE MAPPING WITH CRISPR: Thanks to a new tool called GESTALT, researchers can now introduce a 300-base-pair lineage barcode into cells and, using the CRISPR-Cas9 system, allow edits to accumulate as those cells divide. New computational tools enable the reconstruction of those lineages (right). COURTESY SHENDURE AND SCHIER LABS

Project: In collaboration with Alexander Schier’s lab at Harvard University, Shendure’s group came up with a new way to trace cell lineages in cell culture and in whole organisms—in this case, developing zebrafish. The technique, called GESTALT (genome editing of synthetic target arrays and lineage tracing) is described in Science (353:aaf7907, 2016).

Approach: The basic idea of GESTALT is to introduce CRISPR-Cas9 into dividing cells and track the cells as they accumulate mutations in each subsequent generation of cells. The group’s starting cells or embryos are equipped with a synthetic barcode approximately 300 base pairs in length. In their zebrafish model, the barcode contains 10 20-base-pair sequences targeted by Cas9 endonuclease, with each of the sequences matching a specific single guide RNA.

At the end of these experiments, the scientists amplify the barcodes and read their DNA or RNA, reconstructing the lineage trees computationally. A tag attached to the barcode acts as a unique molecular identifier to help account for potential biases introduced through polymerase chain reaction–based amplification.

The technique should be tractable in any organism where it is possible to do CRISPR-Cas9 editing. “We’re already trying to adapt it to a number of other model organisms,” says Shendure, who first worked on cell lineage tracing as a graduate student in George Church’s Harvard lab in 2000.

Shendure’s University of Washington team developed new computational tools for this study, including one for lineage reconstructions that are not feasible when using standard evolutionary phylogenetics tools. The code is publicly available via the software repository GitHub (under “Cas9FateMapping”). In addition, the group’s barcode sequences and related constructs are available on Addgene.

Future: The single biggest limitation is that the technique does not yield information about the spatiotemporal location of the cells, Shendure says. His group was able to dissect the organs and tissue for rough estimates, but a better way to address this question is with RNA sequencing. The team is also working on a method to improve the introduction of the editing reagents—at later time points in development, for example—to refine their control of mutation rates.

Project: In a study published in Nature, Tang and his collaborators isolated pre-hematopoietic stem cells (HSCs) for the first time and showed their unique transcriptome signatures before and during their maturation into HSCs (533:487-92, 2016). HSCs go on to form a diverse set of immune and other blood cells.

Approach: Isolation is a key hurdle in single-cell analysis (see “Singularly Alluring,” The Scientist, June 2014) and even more so for Tang’s team because pre-HSCs had never been isolated. To verify that the individual cells they picked were pure, the researchers cultured them for several days to determine, using cell markers, whether they formed mature HSCs. Then, they transplanted these cells into recipient mice and confirmed that the cells can form all of the blood cell lineages in vivo. Lastly, they transplanted the pre-HSCs a second time to confirm that they could form all of the correct lineages. This in vivo work was a real challenge, Tang says. A simpler strategy to confirm the isolation is to repeat the sorting of single cells and to fix and stain them, he adds.

Tang has been at the forefront of developing transcriptomics methods for single cells, and for relative beginners to deploy these methods, “now it is quite easy and straightforward,” he says. That said, certain factors boost success. For instance, researchers should be able to isolate the cells rather easily and keep them alive while suspended in a liquid. It also helps if the cells are 6 µm in diameter or bigger, and if you have a good species-specific reference genome.

Tips: The analysis of RNA-seq data is time-consuming and labor-intensive. “When people design such projects, they have to realize that they need much more manpower and time on this ‘dry lab’ side than on ‘wet lab’ side,” Tang says. “It is not enough to be able to use the standard bioinformatics tools out there these days.” For example, his group looked at specific signaling pathways and transcription factors expressed in their pre-HSCs. In addition, researchers should consider following up with interesting candidate genes by knocking them out individually in mice, Tang says.