Whether it’s aligning software or prepping samples, researchers share their tips for studying the metabolome with this underused approach.

“If you want to understand the state of a living thing, the best thing to do is to look at the instantaneous concentration of all the chemicals [it produces],” says Jeffrey Hoch, a structural biologist and biophysicist at the University of Connecticut. The most widely used technique for painting this chemical picture, called the metabolome, is mass spectrometry. But metabolomics researchers such as Hoch say biologists should also get hip to the advantages of a somewhat underused technique, nuclear magnetic resonance (NMR) spectroscopy.

The strength of the NMR signal is proportional to the amount of a metabolite in the sample—be it serum, tissue in vitro, or a live mouse. NMR has lower sensitivity than mass spec, but that’s not a problem when looking at abundant metabolites—and NMR has unique advantages. The method doesn’t destroy samples, and sample prep is relatively straightforward.

Researchers can use metabolic signatures traced by...

NMR in a box

Problem: For any scientist, but especially for biologists, getting started with NMR can be intimidating. “To set up a new NMR lab from scratch, you need months to find, assemble, and install the software, and technical expertise to maintain it,” says Hoch. Raw NMR data are like a chorus, he says. To find the individual voices—spectral peaks, each made by a specific type of molecule—requires several software packages. Depending on the experimental protocol and what metabolites are most important for a particular study, biologists need different combinations of software packages. For those who don’t have a background in physics or analytical chemistry, figuring out what software to use is challenging.

Even with highly trained staff and lots of resources, there are technical challenges, says Hoch. For example, a lab might be running metabolomics software that stops working after an operating system update, interrupting months of work or making past experiments unrepeatable.

Solution: With a grant from the National Institutes of Health (NIH), Hoch and collaborators developed NMRbox (Biophys J, 112:1529–34, 2017), which biologists can use to find the right software and analyze their NMR data using cloud computing. As of early July, the project currently hosts about 160 software packages and has more than 1,000 users. NMRbox is also storing and making available older (or even discontinued) versions of software, increasing the reproducibility of studies. NMRbox servers store users’ experimental data in three locations, in case one server fails. Another NIH-funded software package, COLMAR, is hosted by Brüschweiler’s lab. COLMAR is a set of tools for the second stage of metabolomics studies, using NMR spectroscopy to analyze spectral peaks in the data for insights into their metabolomic significance.

Try it: NMRbox and COLMAR are both available for free online. “Users can kick the tires and figure out which method is best,” says Hoch.

Project: To study and compare the metabolic activity of cancer tissue from patients and patient-derived xenografts grown in mice over long time periods

Problem: Unlike mass spec, NMR spectroscopy is nondestructive, so it can be used to investigate metabolic dynamics in living animals. But long-term studies remain difficult because current dosing protocols require physical confinement or anesthesia, both of which are traumatic for animals, and can also compromise data quality and limit the length and frequency of metabolic measurements. Necessarily short time frames mean it’s nearly impossible to use NMR to study long-term processes, such as how tumor metabolism changes over time. And due to these time constraints, only fast metabolic processes register. “You can only see glycolysis or the Krebs cycle,” says Fan. More-sluggish processes, such as nucleotide and protein synthesis, are invisible, because it takes more than a few hours for them to incorporate measurable amounts of 13C or other isotopes, the metabolic raw materials used as labels in such studies.

Solution: Fan and colleagues developed a protocol to deliver isotope labels such as 13C noninvasively in the animals’ feed (Nat Comm, 8:1646, 2017), allowing them to increase the duration of their metabolic studies and characterize slower pathways. The researchers combined 13C-glucose from Cambridge Isotope Laboratories with a liquid-diet base from Harlan Laboratories, and used this mixture to study the metabolism of patient-tumor-derived xenografts in mice. Mice freely ate feed containing labeled glucose for 18 hours. Then Fan’s group used NMR to compare the metabolism of the xenografts with that of tumor tissue taken directly from patients. Fan says this kind of study can help tease out metabolic differences that may cause a drug that showed preclinical promise to fail in clinical trials. Next, she plans to use this method to study the production of tumor lipids and how they move through the body, potentially laying the groundwork for metastases.

Try it: Fan says dosing labels through animals’ feed should make it easier for biologists with less NMR experience and less animal-handling expertise to conduct these kinds of studies and follow the long-term metabolic changes in cancer and for other purposes. “Injecting [isotope labels] into the tail vein requires special skill, but this really doesn’t,” she says.

Problem: The oxidation and reduction of coenzymes, including ATP and NAD, constitute some of life’s most fundamental chemical reactions. “These reactions are almost ubiquitous,” says Raftery. Relative levels of ATP, ADP, and AMP determine a tissue’s energy stores; the back-and-forth of NAD+, NADH, NADP+, and NADPH regulates ion channels, cell signaling, and cell death. But measuring the simultaneous abundance of these molecules and their coenzymes is challenging because their masses are nearly identical. NAD+ and NADH differ by the presence of just one proton, making them difficult to distinguish using mass spectrometry. And ATP readily loses its phosphate groups during sample processing, turning into ADP or AMP. 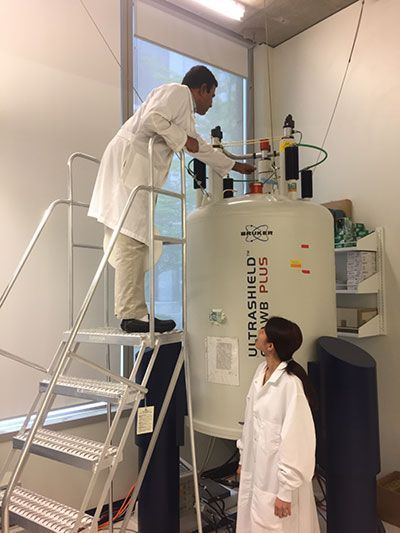 BIG GUNS: University of Washington chemists are using
NMR machines like the one here to study metabolites in the blood.
Daniel Raftery

Try it: Raftery says biologists who want to use 1H NMR to measure these coenzymes can use the sample preparation recipes and the spectral fingerprint in his 2016 research paper, and contact him with any questions. The method will work best with 10 milligrams or more of tissue, but Raftery hopes it will eventually be possible to make these measurements in vivo—perhaps with advances in spectroscopy methods that use lasers or microwaves to increase the signal of the molecule of interest. Right now, he says, his group is exploring the method’s sensitivity in plated cells.

Project: Removing proteins from samples to get a clearer NMR signal

Problem: Proteins in a sample can make it nearly impossible to do NMR-based metabolomics, and getting them out can be tricky. Because they’re relatively large, proteins cause distortions all along the spectrum, blurring out sharp NMR peaks made by individual small molecule metabolites. “If there are proteins present, you get very broad peaks, and it’s very hard to see exactly where those resonances are and quantify their volume,” says Brüschweiler. Serum can be filtered, but abundant proteins quickly clog screens. It’s also possible to use organic solvents to denature and separate out proteins, but that means handling chemicals like chloroform and methanol, which can be daunting for some researchers. 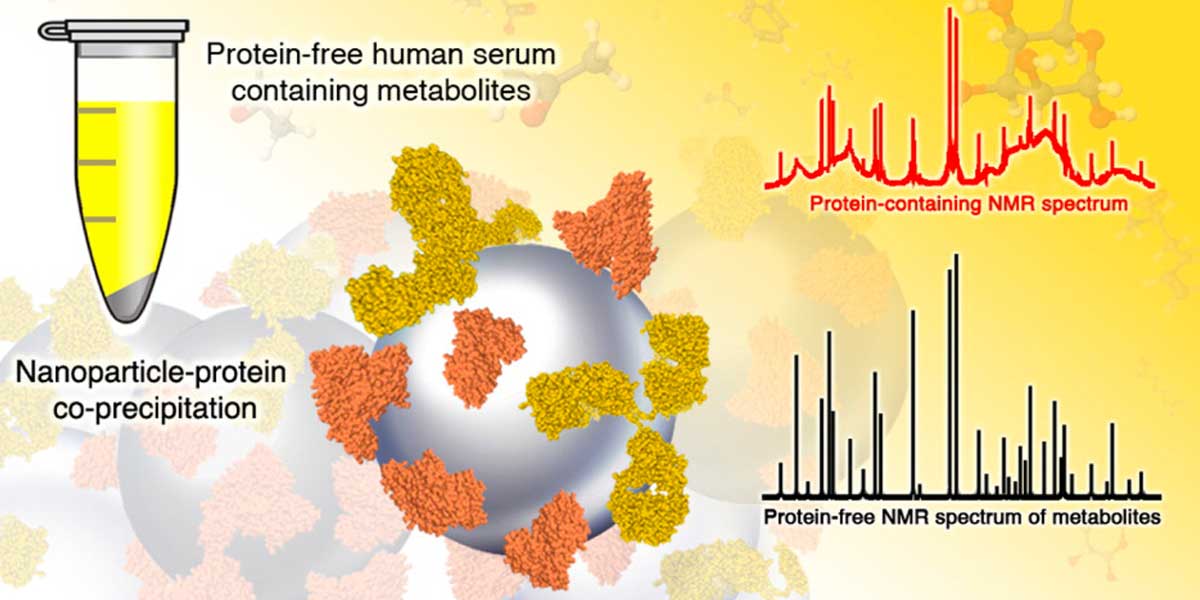 PROTEIN PULL: Silicon nanoparticles stick to proteins, making it easy to remove them from biological samples such as blood before performing NMR. Samples prepared in this way give clearer NMR signals.
Rafael Brüschweiler

Solution: Brüschweiler came up with an easier method—using protein-attracting nanoparticles—by accident. In addition to their work on NMR-based metabolomics, Brüschweiler and his labmates are interested in NMR studies of proteins. At the urging of new grad student Mouzhe Xie, the group was pursuing the use of nanoparticles for capturing and studying disordered proteins such as α synuclein. The original experiments didn’t go as planned, but the researchers noticed that silica nanoparticles (which have a negative surface charge) had a strong affinity for positively charged molecules (such as lysine and arginine) and could rapidly pull proteins out of serum. “We saw a significant change in the NMR spectrum,” Brüschweiler says. The blurriness was gone, leaving a clean signal with sharp NMR peaks from small molecules (Anal Chem, 88:1003–07, 2016). Brüschweiler’s group is now using the method to prepare mouse serum and tissue samples for metabolomic analysis. He says the lab is currently searching for metabolomic biomarkers of diseases including cancer and Alzheimer’s.

Try it: Colloidal silica nanoparticles can be purchased from companies such as AkzoNobel. Brüschweiler’s group combined a milliliter of human serum with 200 microliters of a 40 percent silica nanoparticle solution, centrifuged for a half hour at 4 °C, collected the supernatant, and repeated the process.