Researchers describe their tools for probing how the physical shape of the genome affects genes’ function.

In the mid-1800s, Lionel Smith Beale, an English physician and microscopist at King’s College in London, peered through his microscope at a smear of saliva and mucus coughed up by a man with cancer of the larynx. Beale carefully drew what he saw: cells unconnected with each other and radically diverse in size and shape. He noted that the cells’ nuclei varied in number, size, and appearance. His observations, published in 1860, provide one of the first descriptions of how cancer can ripple and distort the typical appearance of the cell’s nucleus, a sign of the genetic havoc the disease wreaks.

More than 150 years later, scientists are still trying to understand how the physical shape of the genome changes in response to disorder and disease. To fit six and a half feet of DNA inside a single nucleus, the double helix wraps around coin-shaped...

Chromatin’s DNA coils expose some genes to the cell’s transcriptional machinery and hide others. That means gene regulation is to some extent ascribed to chromatin’s structure, says Clodagh O’Shea, a biochemist at the Salk Institute in La Jolla, California. “If we could see the structure of an individual gene, then we could understand it.”

Challenge: The advent of super-resolution light microscopy allows scientists to image structures as small as 10 nanometers, making it possible to capture molecular details at the level of the DNA strand itself—termed DNA’s “first-order” structure. At chromatin’s higher-order structures, between 20 and 200 nanometers, light microscopy struggles. The scale is too small to resolve with conventional microscopes and too large for super-resolution approaches. Electron microscopy can offer a clearer picture at that scale, but most of the stains used in electron microscopy do not react with DNA exclusively. As a result, scientists have generated conflicting models of how chromatin fibers fold together.

Solution: O’Shea’s team developed a system that labels chromatin for electron microscopy using multiple chemical steps. First, a fluorescent dye called DRAQ5 binds exclusively to DNA. Then, the researchers excite that fluorescent dye, which in turn catalyzes a reaction that dusts a thin layer of polymers on nearby DNA and its associated proteins. Finally, the researchers paint that polymer dust with a metal that can be visualized with electron microscopy, revealing the chromatin.

O’Shea and her colleagues combined this staining approach with a version of electron microscopy called electron tomography that images the sample at multiple angles. “You get the computational equivalent of cutting through the nucleus with a ham slicer,” she says. The researchers were able to reconstruct those virtual “slices” into a three-dimensional model of the nucleus.

Need to Know: Typically, electron tomography uses a specimen holder that is adjusted by hand to image different angles. O’Shea and her colleagues needed eight different angles to wrap around the whole chromatin fiber and compensate for blind spots inherent to electron tomography, so they built a sample holder that could make those fine adjustments automatically. “Having that piece of hardware was key,” she says. 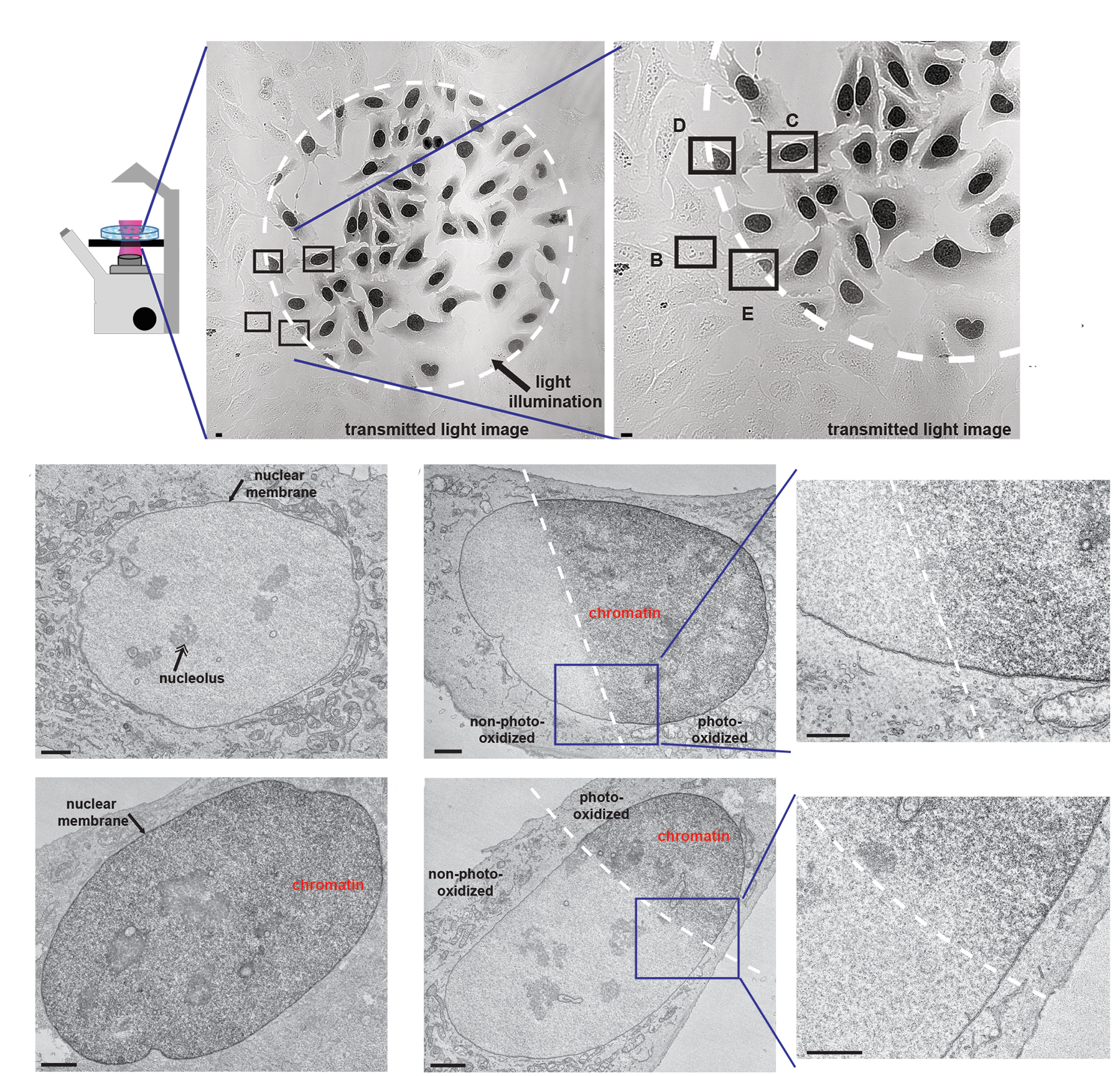 IN THE SPOTLIGHT: A light-catalyzed reaction highlights the structure of chromatin. The six lower panels show zoomed-in views of four cells from the top two panels, revealing the visual difference between chromatin exposed to a specific light wavelength and chromatin outside the illumination spot.
OU ET AL., SCIENCE, 357:6349, 2017

Use It: The group is working with Nikon to develop a roadmap and parts list so that other labs can modify their microscopes and acquire similar images.

Challenge: Mandel wanted to understand why chromatin is denser in the neurons of mice with a mutation in a gene called MeCP2. Mutations in human MeCP2 cause Rett syndrome, a disorder that impairs communication and motor skills. Mandel set out to track the presence of chemical tags that can cause chromatin to pack tightly. Fluorescent markers that highlight those chemical tags exist, but Mandel ran into two big problems. First, it’s hard to use more than three or four different fluorescent markers in the same image, and she wanted to track five or more chemical tags. Also, the light used to excite those markers doesn’t penetrate deep into tissue, making it difficult to acquire images crisp enough to see chromatin in detail inside the brain.

Solution: Mandel turned to Linhoff, an imaging expert who suggested an approach based on array tomography. In this technique, researchers embed tissue into plastic or gelatin and shave it into sections 200 nanometers wide—about 100 times thinner than the diameter of a human hair. Then they image each section and assemble the series to create a detailed view of nuclei deep within the mouse brain. Linhoff stained the sections with one fluorescent marker at a time, imaged them, then stripped off that first marker and added the next. The embedding makes the tissue stable enough to withstand this relatively aggressive chemical treatment. They found that the loss of MeCP2 in neurons resulted in 20 percent more chromatin, tightly packed in the nucleus.

Need to Know: Linhoff warns that there is a steep learning curve with array tomography. Fortunately, the tissue sectioning can be outsourced. He sent his mouse tissues to the Cell Sciences Imaging Facility at Stanford University, but also recommends the services of a Stanford-based company called Aratome. This company coats their coverslips with carbon, which allows for even more aggressive treatment of the tissue before imaging.

Use It: Reconstructing a 3-D picture from the many slices of array tomography can be a complicated process. Linhoff and his colleagues suggest using a detailed manual available through Stanford’s Neuroscience Microscopy Service to align images.

Challenge: For electron microscopy and array tomography, cells are treated with chemicals to fix their structures for imaging. The result is crisp and detailed images—and dead cells. That prevents observational studies of how chromatin packaging responds to environmental changes inside and outside the cell.

Solution: Advances in fluorescent probes and in strategies for sample illumination have pushed the possible spatial resolution of fluorescent images down to fewer than 10 nanometers—a scale small enough to reveal chromatin changes in living cells. Maeshima combined a super-resolution imaging technique called photoactivated localization microscopy with imaging software that tracks the movement of a single DNA-wrapped histone structure, called a nucleosome. The researchers found that chromatin in more open configurations moved more than tightly packed chromatin did. Maeshima suggests that these shifts can make even more genes accessible to transcriptional machinery.

Need to Know: Since the development of super-resolution microscopy nearly a decade ago, researchers have developed long-lasting dyes that make these kind of tracking experiments possible, says Maeshima. But some limitations remain: “We cannot see all of the nucleosomes at once,” he says. “If we did, we couldn’t see the individual movements—so we can only pick out a limited number of nucleosomes to see at a time.” 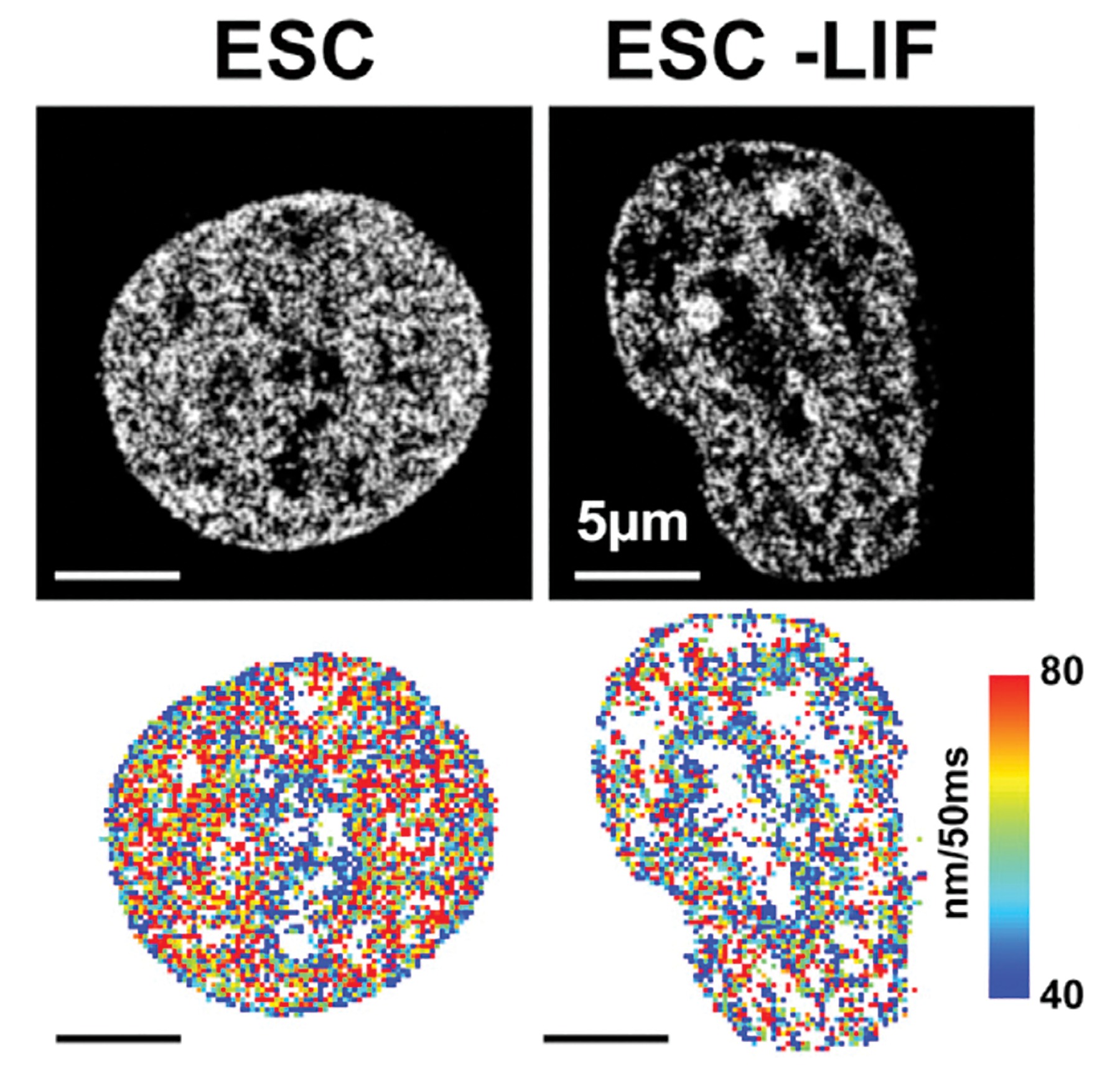 Use It: The team used the image-processing software Poly-ParticleTracker to trace the movements of their labeled nucleosomes.

Project: Imaging chromatin in its natural state within the cell

Challenge: Most fluorescent dyes that bind to DNA are toxic. If they don’t kill the cell right away, they can still produce undesirable effects. “I always cringe, because I never know if what I look at is going to be the reality of chromatin or if it is an artifact,” says Backman. 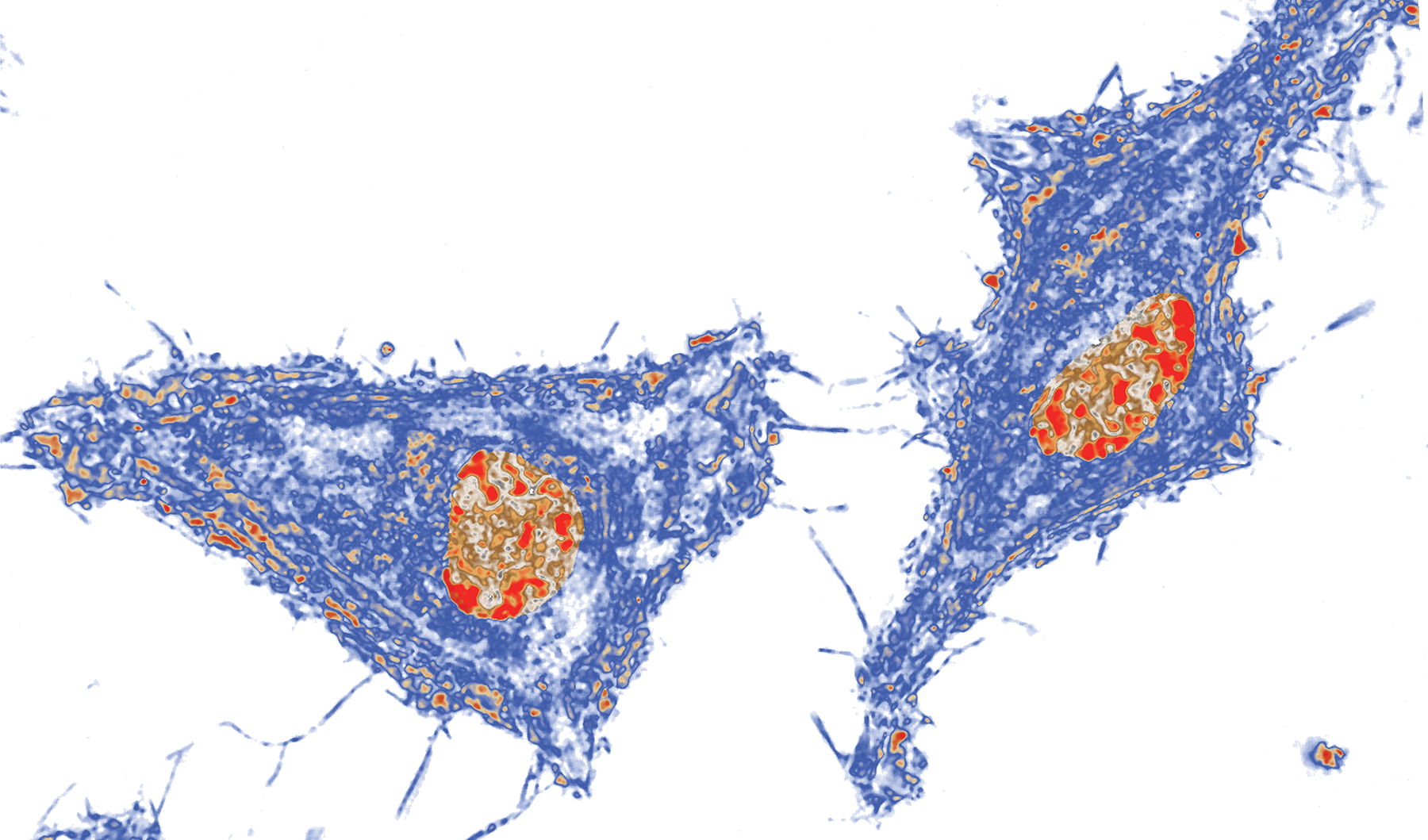 LABEL FREE: A technique that looks for small fluctuations in the light coming from DNA molecules in living cells can show changes in chromatin structure over time.
VADIM BACKMAN, NORTHWESTERN UNIVERSITY

Solution: If labels are toxic, why use them at all? Some biological molecules give off their own natural fluorescence, but researchers didn’t think DNA was one of them until Backman’s group saw DNA “blink.” They discovered that DNA does give off natural fluorescence, but only sporadically. Most of the time it remains in a dark state, but a patient eye can catch the flash as the DNA absorbs light, gets excited, and emits its own fluorescence. Backman found that even low levels of illumination are sufficient to produce the blink, which means that the light exposure won’t damage the cells. “You can run experiments for days, imaging the entire cell cycle,” he says.

Need to Know: Not all of the DNA strand glows at the same time, however, so the compromise is that microscopists can’t get an image of each and every chromatin molecule using this technique. Furthermore, the technique isn’t yet at the super-resolution stage, so while changes that happen at the 20-nanometer scale can be detected, they can only be localized to a 200-nanometer-wide region. Even so, Backman says, “you can look at hundreds of cells over days.”

Use It: Backman and his colleagues are currently developing a resource core at Northwestern dedicated to label-free imaging of DNA. They also plan to create a website next year to provide guidance for other scientists who want to try their hand at the method.