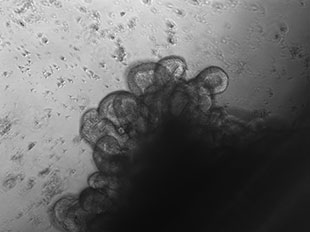 CANCER STEM CELLS IN A DISH: Cells isolated from a patient with metastatic colon cancer grown in organoid (3-D) culture. The organoid shown here recapitulates the crypt-like structures typical of those in the colon tissue of humans.COURTESY OF PIERO DALERBA (COLUMBIA UNIVERSITY), DARIUS M. JOHNSTON AND MICHAEL F. CLARKE (STANFORD UNIVERSITY)For years, cancer researchers have sought to understand why tumors grow back in patients who have successfully undergone chemotherapy and/or radiation. One explanation, proposed in the late 1970s, was the cancer stem cell (CSC) hypothesis, which posits that a small fraction of cancer cells can self-renew indefinitely and give rise to the different cell types in a tumor. The CSC hypothesis can also explain why many cancers are resistant to standard courses of therapy: the drugs don’t affect the stem cell population. If that’s true, then drugs that eradicate CSCs could in theory cure cancer. By purifying...

Researchers definitively identified CSCs in blood tumors beginning with acute myeloid leukemia (AML) in 1997, but the presence of CSCs in solid tumors was hotly debated because experiments using cell-surface markers to demonstrate their presence in solid tumors often yielded inconsistent results. In recent years, however, cells with self-renewing and tumor-initiating properties have been found in all tumor types: glioblastoma, colorectal, breast, pancreatic, and lung cancers. The debate no longer centers around “Do cancer stem cells exist?” but rather, “How many different types of cancer stem cells are there?”

One big barrier to understanding the biology of CSCs is easy access to patient samples; many hospitals freeze tumor sections, but it’s much harder to obtain large numbers of viable cells from thawed tissues than from fresh ones. Another challenge lies in isolating pure populations of cells based on cell-surface markers. The Scientist sought out some expert advice on isolating and culturing stem cells from blood cancers and solid tumors for scientists who are eager to try their hand at working with cancer stem cells.

© ISTOCK.COM/KUBKOOJohn Dick, a stem cell researcher at the University of Toronto who first isolated cancer stem cells associated with AML, maintains that securing fresh tissue from clinicians is crucial to successful isolation of CSCs. Even if that proves difficult, however, pipetting or sectioning patient specimens gently and keeping them on ice will maximize the number of viable cells that can be isolated.

The first step in isolating CSCs from primary patient samples is to obtain a single-cell suspension of the tumor. The benefit of working with blood cancers is that tumor cells are already in a single-cell suspension, and they can be separated from red blood cells and platelets using the well-established Ficoll separation protocol. To prevent the Ficoll solution from splashing, Christopher Dove, a graduate student in Ravindra Majeti’s stem cell lab at Stanford University, advises placing a glass Pasteur pipet to the very bottom of the test tube, and pouring the Ficoll solution down through the pipet. Zero contamination of the lymphocytes is essential: if you think red blood cells have snuck into the test tube, Dove suggests redoing the Ficoll separation.

When handling frozen blood samples, Dove advises transferring the thawed sample into media containing DNase to degrade any DNA that is exposed when cells die during a rapid freeze-thaw. The exposed DNA is ‘sticky,’ and can clump cells to one another by acting like a strip of Velcro. Adding DNase to the media helps maintain a single-cell suspension. “If you’re thawing 40 million cells, but count 3 million and wonder where the other 37 million went, try using DNase,” he suggests.

Solid tumors, on the other hand, need to be mechanically and chemically digested to yield a solution of single cells. This process is often traumatic for the cells, as they must be enzymatically disaggregated from each other. Researchers need to be mindful of the enzymes they use. For example, trypsin, commonly used to passage cells in tissue culture, should be avoided because it works by cleaving cell-surface markers. You’ll need those later for detecting your stem cells.

Catherine O’Brien’s research lab at the University of Toronto and Hans Clevers’s group at the Hubrecht Institute in Utrecht, The Netherlands, use TrypLE Express, a gentler yet equally robust enzyme for the dissociation step. Collagenase can also be used as an alternative to trypsin for colorectal cancers, and usually, a 1 cm3 block of tumor is sufficient for good yield. Piero Dalerba, a professor of pathology and cell biology at Columbia University, advises tinkering around with the dissociation protocol, given that different cocktails of enzymes can work better for different tumor types. Because colorectal tumor cells grow in a single layer, it is easier to disaggregate the cells from patient tissue than it is from tougher, more fibrotic tumors. For these more difficult tumors, Clevers suggests incubating the primary tissues overnight with collagenase.

© ISTOCK.COM/DANIELVILLENUVEThe next step is to separate CSCs from the single-cell suspension using flow cytometry. CSCs are most commonly recognized by markers expressed on the cell surface and are stained with fluorophore-conjugated antibodies, with different colors of fluorescence designed to target the different markers. The cytometer detects these fluorophores to separate the CSCs from the rest of the cells in the suspension. Although many staining protocols use monoclonal antibodies, the cautious researcher can incorporate a blocking step to prevent the antibodies from recognizing anything that they shouldn’t.

Irving Weissman, a pioneer in the stem cell field and director of the Stanford Institute for Stem Cell Biology and Regenerative Medicine, says it is not good enough to isolate AML stem cells, for instance, using just one marker. The steps through which a normal hematopoietic stem cell progresses to AML are clearly defined, so it is important to go “all the way” by including the most specific set of markers possible. Weissman recommends isolating the CD34+, CD38–, CD90+, and Lin– cell fractions to robustly enrich for an AML stem cell population.

For solid tumors, Clevers advises researchers to be very familiar with the stem cell literature for the type of cancer under study. Although Clevers discovered that Lgr5 marks colon cancer stem cells, Lgr5 expression on the cell surface is generally low. Other markers such as EpCAM, CD44, and CD166 have been validated by multiple research groups to enrich for colon cancer stem cells from patient samples (PNAS, 104:10158-63, 2007; J Clin Pathol, 65:140-45, 2012; Oncol Lett, 7:1544-48, 2014).

Michael Clarke, a clinician and stem cell researcher at Stanford University who was the first to isolate cancer stem cells from solid tumors, cautions that while cell-surface markers are useful for enrichment, their presence doesn’t guarantee that the sorted cells will give rise to a full tumor—the crucial test that you have isolated a CSC population. Because markers for CSCs in solid tumors can vary greatly, researchers should run all the cell types sorted from a single tumor through a transplantation assay, described below.

“The trickiest thing for most people new to working with stem cells is the sorting,” Dove says. “Flow machines are big, expensive sorters that require a considerable amount of expertise to operate in a reproducible fashion.” Researchers who have not had significant experience with a flow cytometer should consult an expert at their institution’s flow core to set up the proper gates, calibrations, and parameters for obtaining the purest population of cells. In particular, Dalerba notes that using many antibodies to isolate the CSCs can lead to confusion because of overlap of emission spectra. Researchers should carefully titrate each of the monoclonal antibodies in their analyses and compare different fluorophore-antibody combinations. In other words, take the time to experiment and optimize a tissue-specific staining protocol.

© ISTOCK.COM/DUTCHICONThe “gold standard” proof that cells isolated by flow cytometry are indeed cancer stem cells involves transplanting them into immunocompromised mice to see if they can give rise to an entire tumor. This process normally consists of diluting the total number of cells and injecting different dilutions into mice. If the number of cells in a tumor is proportional to the number of cells initially injected, you can be fairly sure that your cells were CSCs.

For blood cancers such as AML, cells are transplanted via tail-vein injections. AMLs typically take around two weeks to engraft.

For solid tumors, cells are most commonly transplanted subcutaneously near the organ in which the tumor typically forms. The diluted cell fractions are mixed with Matrigel, a gelatinous protein matrix that provides a support for the cells to latch on to. Colorectal tumors take, on average, 100 days to engraft following subcutaneous injection, but it can take anywhere from eight weeks to six months for a tumor to grow in a mouse.

For breast cancer, gender of the mice and the method of cell delivery matters. According to Clarke, breast CSCs should be injected into the mammary fat pad of female mice along with an estrogen pellet, as estrogen is often involved in the maintenance of breast cancers. Triple-negative breast cancers can take 2–6 months to engraft, and ER+ tumors up to a year, says Clarke.

One major caveat of the transplantation assay is that not all isolated CSCs engraft. The reason for this is unknown, but one possibility is that additional immune cell types are needed for the cancer cells to thrive, particularly in solid tumors.
The time lag between getting cells from a patient and injecting them into mice is also important. “The faster you can get the tumors into mice, the better the chance of engraftment,” says Clarke. John Dick’s research group in Toronto has developed such a close collaboration with clinicians that they are often able to get AML patient samples into mice in as little as two hours.

© ISTOCK.COM/ALEXANDERYERSHOVIn vitro assays can help confirm that you have indeed isolated CSCs, and they can also aid in studying CSC biology. CSCs seem to grow best as spheres that form in the presence of a 3-D matrix such as Matrigel. Because stem cells are thought to form spheres in culture, researchers often use sphere-forming assays to test these cells’ self-renewing properties.

A related in vitro approach is the organoid culture system—essentially, a 3-D culture to which growth factors are added in order to coax cells into forming miniature organ buds. The Clevers lab developed such a system in 2009 to grow structures of the internal small intestine and colon called intestinal crypts; later, they expanded the technique to cancer cells (Gastroenterology, 141:1762-72, 2011). The organoid system ensures that the phenotype of the cells taken from patients does not change. Cells typically take a week to form small organoids in culture. One important consideration is that different tumors may require different growth factors: many solid tumors require EGF and FGF; breast cancers can require estrogen; and prostate cancers, testosterone.

These in vitro experiments should not replace the in vivo transplantation assay to validate the true potential of the CSCs. CSCs that do not form tumors in mice can grow in culture, and the converse can be true as well. The lesson? Do both in vitro and in vivo assays.
One further caveat is that culture conditions for blood cancers such as AML have yet to be established. Unlike solid tumors, they do not need a surface to latch onto in order to grow. To work around this limitation, researchers typically expand populations of stem cells derived from AML using mice.

Once you are relatively sure you have indeed isolated CSCs, cells can be expanded in mice or by using the organoid culture technique. These CSCs can also be used for drug screens, and for other in vitro and in vivo assays. Having as close to a pure population of cells as possible is critical, particularly for sequencing and gene-expression profiles. “If we don’t have a pure population, we’re not going to have a clean answer coming out,” says Weissman. The hope is that by mastering the methods of working with stem cells derived from patient tumors, researchers can use these populations to better understand tumor biology. 