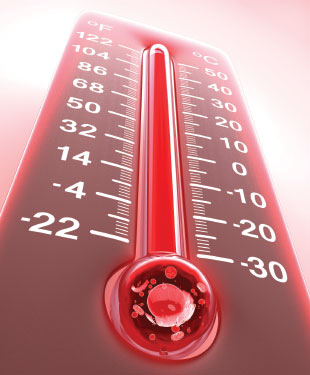 “Temperature is one kind of basic physical parameter which regulates life,” says Mikhail Lukin, a physicist at Harvard University who has developed a diamond-based intracellular temperature sensor. “It determines the speed of all sorts of processes which occur inside living systems.”

But although temperature is a basic vital sign, scientists have a relatively poor understanding of how it varies among and within cells. “It turns out that to measure temperature reliably inside the cell is not easy,” says Lukin. “You cannot stick a large thermometer in there and maintain the cell viability.”

In the last five years, however,...

Although temperature differences within the body tend to vary on the order of a few degrees, at most, researchers are beginning to suspect that small differences can alter cells’ chemistry and function, or tip off doctors to cancerous growth. Here, The Scientist profiles several methods for examining how temperature influences what’s going on inside cells. 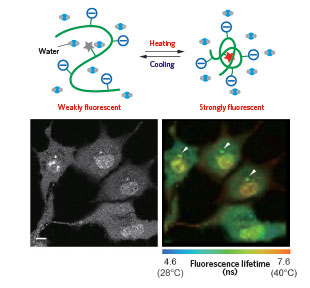 HOT STUFF: (Top panel) Design of a miniature fluorescent thermometer developed in Seiichi Uchiyama’s lab. When the thermometer is cool, its polymer backbone (green) maintains an open structure. Water molecules quench the fluorescent unit (shown here as a star). As temperatures rise, the thermometer folds and protects the fluorescent unit from water, allowing it to glow. (Bottom panel) The thermometer reveals that the nucleus of a cultured monkey cell is, on average, one degree hotter than the cytoplasm.NAT COMMUN, 3:705, 2012Researchers: Seiichi Uchiyama, University of Tokyo; Madoka Suzuki, Waseda University, Singapore

Goal: Temperature influences myriad processes in the cell, from gene expression to protein-protein interactions. Suzuki, Uchiyama, and their colleagues seek to measure slight variations in temperature between different parts of cells. This may shed light on how heat is generated in the body and how local variation in temperature changes a cell’s chemistry.

Uchiyama first started mapping temperature distribution inside single cells in 2012, publishing his design for a fluorescent polymeric thermometer (Nat Commun, 3:705). The thermometer consisted of a fluorescent molecule attached to a polyacrylamide chain whose conformation changes with temperature, either quenching or activating fluorescence. The researchers were able to show that the nucleus is warmer than the cytoplasm and that the mitochondria radiate substantial heat in a monkey kidney–derived cell line. (These findings are controversial; see “Temperature Quandary” below.)

Uchiyama has since published other fluorescent sensor designs, most recently developing a faster fluorescent polymeric thermometer that relies on looking at the fluorescence ratio of a temperature-sensitive fluorophore to a temperature-insensitive one (Analyst, 140:4498-506, 2015). The researchers used the sensor to measure temperature in human embryonic kidney cells, finding that the nucleus was approximately 1 °C warmer than the cytoplasm.

When Suzuki first began to design a thermometer he remembers just gently pressing a glass microneedle that had a fluorescent dye enclosed in its tip against the membranes of cells and seeing if the fluorescence changed as temperature rose (Biophys J, 92:L46-L48, 2007). Eventually, he and his colleagues began to experiment with making fluorescent nanoparticles they could introduce into cells. The fluorescent molecules cannot be exposed to the chemical environment of the cell, because this can alter their brightness. “The nanothermometers should read out temperature change and should not respond to [other] environmental changes,” says Suzuki.

To protect the fluorescent reporters, the researchers embedded the molecules in a hydrophobic polymer and then encased this hydrophobic core within a hydrophilic polymer shell, creating particles that were, on average, 140 nm in diameter. To further guard against misinterpretation, Suzuki included two types of fluorophores, one sensitive to heat and one not. By measuring the ratio of the two fluorophores’ brightness, the team found that in cultured human cancer cells stimulated with a chemical that spurs cells to produce heat, the temperature varied locally (ACS Nano, 8:198-206, 2014).

The team has since developed a small-molecule thermometer composed of a yellow fluorescent dye that specifically targets mitochondria, the engines of heat generation in the cell (Chem Commun, 51:8044-47, 2015). Another small-molecule thermometer targets the endoplasmic reticulum—an organelle that also appears to help the cell to generate heat (Sci Rep, 4:6701, 2014).

Suzuki hopes to someday be able to develop intracellular thermometers with faster response times and greater temperature sensitivity so that they can identify other hotspots of heat production in the cell. For now, he says, sensors struggle to capture small bursts of heat that diffuse quickly. “The mitochondria and endoplasmic reticulum are considered as heat sources,” says Suzuki, as is actomyosin in muscle cells. “There might be other heat sources which we have never imagined.” 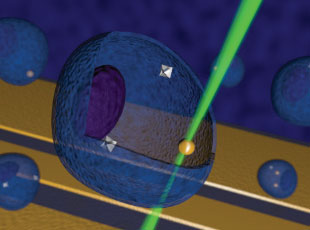 BLINGED-OUT CELLS: Mikhail Lukin and his colleagues heat cells by shining lasers on gold particles and measure internal temperatures of the cells by detecting the spin states of defects in nanodiamonds.NATURE, 500:54-58, 2013Researcher: Mikhail Lukin, Harvard University

Goal: Lukin and his collaborators dream of using intracellular temperature to sort healthy cells from sick ones, and of regulating cellular processes by heating them up or cooling them down. “It opens a broad array of possibilities,” he says.

Approach: Lukin, a physicist, sought to differentiate himself from the pack by making thermometers out of diamond nanocrystals rather than fluorescent dyes or polymers. “We made use of basically quantum defects in diamonds, which are the so-called nitrogen-vacancy centers,” he explains. “It’s a defect where nitrogen substitutes [for] carbon.”

Nitrogen-vacancy centers have atomic spin states that change orientation when perturbed by light, magnetic fields, or, it turns out, temperature. “If the temperature of the nanocrystal changes, then what happens is that the separation between carbon atoms in the nanocrystal changes a little bit,” altering the spin state of electrons, says Lukin. When the researchers shine a laser on the diamond nanocrystals, the impurities glow, emitting varying fluorescence depending on their spin state and temperature. (See “Monitoring Magnetic Bugs,” The Scientist, October 2013.)

To test their method, the researchers also introduced gold nanoparticles into cells and heated the particles with lasers, allowing Lukin and his team to both control the temperatures of cells and monitor how their temperature control was working. The researchers found that they could detect changes as small as 0.0018 °C (Nature, 500:54-58, 2013).

Lukin and collaborators are now using temperature to explore and control the development of worms. 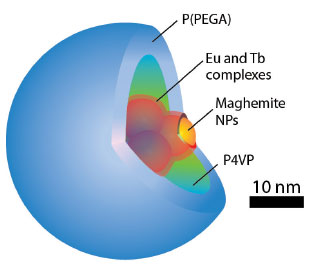 Goal: Carlos and Millán are trying to kill tumors by selectively applying lethal levels of heat to cancer cells, creating temperature gradients that destroy biomolecules and trigger cell death. But efforts to kill cancer cells using hyperthermia tend to falter for lack of a good way to ensure that cancer cells get hot enough while the surrounding tissue remains sufficiently cool.

Approach: Carlos and Millán recently designed a nanoparticle that is both a heater and a thermometer (ACS Nano, 9:3134-42, 2015). Researchers hoping to both heat and take the temperatures of cells have generally used separate particles for the two tasks. Carlos and Millán wanted to make sure they were measuring temperature exactly at the heat source, as heat can quickly dissipate over short spaces in cells. “If we don’t have the thermometer really in contact with the heater, we will not be able to measure the effective local temperature,” Carlos says.

The heater consists of a magnetic bead that heats up when exposed to a magnetic field. The thermometer consists of two fluorescent ions, one of which changes brightness with shifts in temperature. These are all enclosed in a polymer shell.

There are already clinical trials testing the use of magnetic bead–induced heating to kill cancer. But the researchers think that with their combined heater-thermometers they can heat cells more precisely, reducing both the number of nanoparticles needed and collateral damage beyond the tumor.

“If you internalize the nanoparticles specifically inside cancer cells, maybe just a few are enough to induce cell death,” says Millán. The researchers are currently heating cells in culture and monitoring their temperature and reactions. 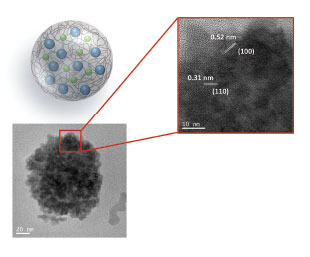 GOING DEEP: Jaque and his colleagues have created a nanothermometer that can sense temperature underneath skin. (Top left) The thermometer is composed of temperature-sensitive quantum dots and temperature-insensitive fluorescent nanoparticles, all embedded in a biocompatible polymer. (Left and above) Transmission electron microscopy image of the nanothermometerADV MATER, 27:4781-87, 2015Researcher: Daniel Jaque, Autonomous University of Madrid

Goal: Jaque’s team hopes to develop methods to measure temperature beneath animals’ skin and eventually in human tissue in vivo by using temperature sensors that give off fluorescent signals that penetrate flesh.

Approach: Most nanothermometers have a major limitation: they emit light waves in the visible range. This works fine for observing cells in culture or even in vivo in relatively transparent creatures, such as worms. But visible light cannot tell researchers much about cells below the skin in intact, opaque organisms. Much of the infrared spectrum, meanwhile, is highly absorbed by water, which is abundant in tissue.

The thermometer is made up of quantum dots, whose fluorescence is quenched with rises in temperature, and temperature-insensitive fluorescent nanoparticles, all encapsulated in an FDA-approved polymer.

With current technologies, it is possible to sense temperature around 1?cm below animals’ skin. But to move to medical applications in humans, researchers will need to sense temperatures at much deeper levels. “We are just at the beginning of the history,” says Jaque.

Eventually, Jaque hopes to use nanothermometers to guide heat treatment for cancer. “You introduce nanoparticles that give a real-time measurement of temperature inside your body,” he says. Then, as you heat the tumor, “you can adjust the treatment not to burn the body.”