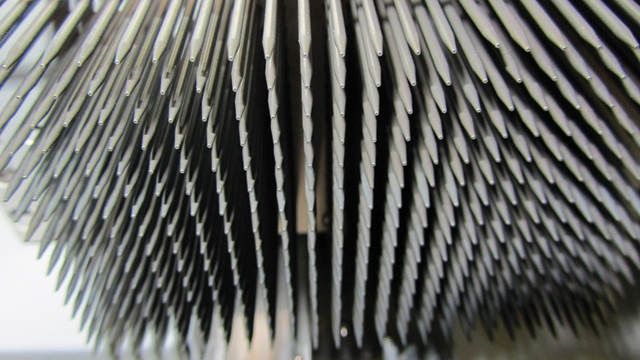 A brief manuscript published in 1924 describes a new type of glass pipette: it is curled into a U-shape for steadier handling, with a small hole in its shaft that allows users to create an air vacuum with their pointer fingers, enabling the delivery of “minute quantities of liquid.” Fast-forward through the decades, and pipettes unfurl. Plungers replace rubber bulbs. The 1960s herald the arrival of pipettes that control the volume of each droplet by displacing a pocket of air. Droplet manipulation becomes ever easier as pipettes evolve. Finally, dispensing liquid becomes so mindless that watching grass grow may be more entertaining than manually adding buffer to the 96 wells in a plate. Proof of simplicity: robots can do it.

However, the price and maintenance of automated pipetting equipment may keep a sore hand from reaching for the wallet. If your laboratory...

Automated systems for dispensing fluid can be divided into three categories. Liquid handlers, often equipped with multichannel pipettes, excel at dispensing variable volumes. Pin tools transfer small, fixed quantities of solution by taking advantage of the way liquid naturally adheres to surfaces. And acoustic dispensers—the latest innovation—shoot precisely measured droplets of liquid from the wells of one plate into the wells of another by harnessing sound.

The Scientist spoke with researchers who maximize their laboratory’s output and accuracy by using one or all of these instruments in place of manual pipetting. Here’s a review of the tools that up their game.

How small are your drops?
When deciding which make and model to purchase, consider the types of experiments you do. If your experiments change from month to month, you’ll need a flexible system capable of dispensing varying amounts of liquid. If you tend to follow the same recipe, you might be able to get by with a cheaper and more rigid system. Also, if your experiments typically occur in 384- or 1,536-well plates, you’ll need a tool that can accurately expel a tiny volume of liquid.

Choosing a vendor
At least twenty vendors sell their own automated liquid handlers, and the vendor you choose mainly depends on your budget and personal needs. Luckily, lab automation is easily integrated, so if you’d like to connect an existing automated module—such as an incubator—to an automated liquid handler, there’s no need to be faithful to one company. “Fully automated systems are usually put together piece by piece, and truth be told, some companies are better at some things, and some are better at others,” says Sam Michael, an automation engineer at the NIH Center for Translational Therapeutics in Bethesda, Maryland.

If you plan on linking your liquid handling with other automated modules, companies that specialize in integration can provide impartial advice. “If someone describes what kind of compound screens they are running, for example, we can respond with a proposal that tells them if we think the Tecan, Hamilton, Beckman, or another system is best for pipetting,” says Andy Zaayenga, vice president of business development at HighRes Biosolutions in Woburn, Massachusetts.

The basics
Multichannel liquid handlers are the workhorses of automated pipetting. They usually consist of one or more mechanical arms, which hold a multichannel pipette with 8, 96, 384 or 1,536 terminals. Researchers often use liquid handlers to dispense reagents from a single source into the wells of a plate, or to transfer solutions from the wells of one plate into the wells of another. These tools can also distribute solutions of microbes or sturdy cells into plates for assays.

Drop Size
Most multichannel pipettes reliably handle volumes ranging from 1µL–200µL.Additional equipment can bring the volume up, but accuracy at volumes smaller than 1µL may be compromised. Bells and whistles
Liquid handlers come with a slew of options, the first being channel number. In general, it’s best to fill every tip of a multichannel pipette each time it is used. Therefore, if your lab uses both 96- and 384-well plates, the 96-channel pipette may be a better buy because it fits both needs by hitting the 384-well plate four times. Also, the price goes up as the channel number increases.

There’s also the question of disposable versus fixed tips. Kevin Shianna, a genomicist at the Duke Center for Human Genome Variation in Durham, North Carolina, uses disposable tips on his Biomek FX liquid handler from Beckman Coulter, picking them up by  pressing the head of the multichannel pipette against a tip box so that each terminal picks up a tip, as handheld pipettes do. On the other hand, Sam Bettis, technical director of the Cellular Screening Center at the University of Chicago, opted for fixed tips that remain attached to the 384-channel pipette on his Freedom EVO liquid handler from Tecan Group Ltd. Fixed tips must be cleaned between experiments (a procedure which Bettis automates as well), but they reduce cost and waste; sterile disposable tips start at $55 for ten 96-tip racks. Finally, fixed tips may be slightly more accurate and precise at lower volumes because they are physically attached to the pipette, adds Bettis. “No air sneaks in to cause minor fluctuations in volume.”
Extra Asset

Some multichannel pipettes operate their tips independently, which allows you to program the machine to automatically transfer the contents of selected wells from one plate into the wells of another. Shianna uses this function to rescreen promising compounds. One arm of his Biomek FX holds a 96-channel pipette head, and the other arm has an 8-channel pipette head that operates each of its terminals independently. “After I know which samples look good,” says Shianna, “I’ll create an Excel file that tells the robot that I want to make one master plate using specific samples cherry-picked from ten different plates, and the robot just does it.”

Hot tip
Shianna recommends recalibrating occasionally, especially before you transfer soapy or glycerol-based liquids that can stick to tip walls. Simply program the robot to deposit 1µL, measure the actual volume it dispenses, and adjust the dispensed amount until it measures 1µL.

Vendors
Dozens of companies manufacture automated liquid handlers. Some common choices include the Freedom EVO from Tecan, the Biomek FXP from Beckman Coulter (the current version of Shianna’s device), the Microlab STAR from Hamilton Robotics, the Bravo from Agilent Technologies, the JANUS from Perkin-Elmer, the Sciclone G3 from Caliper Life Sciences (now a part of PerkinElmer), the Oasis from Dynamic Devices, and the Thermo Scientific Matrix Hydra from Thermo Fisher Scientific.

The basics
Pin tools offer a relatively inexpensive and efficient way to dispense tiny volumes—an advantage for labs wanting to save on reagents and compounds by miniaturizing experiments so that they can be conducted in 384- and 1,536-well plates. Pin tools consist of arrays of 96, 384 or 1,536 pins attached to a fixture. The tips of the pins are either solid (like the tip of a sewing needle) or have slight grooves. Unlike pipette tips, they passively gather small quantities of liquid through capillary action and deposit the droplets on a new or liquid surface that wicks them from the pin. The NIH’s Michael and his colleagues use the tool to transfer precisely 23nL of sample solutions stored in one 1,536-well plate into another, where the assay will occur. ACOUSTIC PIPETTES:
The latest innovation in liquid dispensing, machines like Labcyte’s Echo 555 (left) instrument use sound to shoot precisely measured droplets from the wells of one plate into the wells of another, eliminating the need for pipette tips.
COURTESY OF LABCYTE

Drop size
Each pin tool dispenses a fixed volume that ranges from 2nL–25µL.

Setting the stage
To automate a pin tool, researchers typically attach it to their liquid handler. V&P Scientific, Inc., the leading pin tool vendor, makes a variety of mounting plates designed to be compatible with more than 50 different liquid handlers. In the case of the Biomek FXP automation workstation, two magnets on either side of the multichannel pipetting head can pick up a pin tool mounted on a magnetic plate, and use this tool instead of the pipetting head. Other liquid handlers have grippers that grab and operate the pin tool independently of the pipette head.

Additional Asset
Pin tools get the job done quickly. Michael says his 1,536-prong pin tool can transfer liquid from one plate to another in about 10 seconds.

Limitation
Pins dispense a fixed volume determined by their design and diameter. So, if your droplets vary in volume from one assay to the next, be prepared to buy multiple pin tools or consider purchasing an acoustic dispenser.

The basics
In 2003, acoustic dispensers revolutionized pipetting. These high-end tools eject precisely measured droplets from one plate into another using sound. Because a droplet fires directly from one plate to the next, no tips are wasted, no wash steps are necessary, and contamination is hardly an issue. And they work for any liquid, including glycerol-based solutions, which tend to stick to pins and pipette tips.

These dispensers first analyze the acoustic properties of the liquid in each well of a plate by sending sound waves through the fluid. “Essentially, we use the same sonar process used to locate submarines underwater,” explains Rich Ellson, founder and chief technology officer at Labcyte Inc., headquartered in Sunnyvale, California, a manufacturer of acoustic dispensers for laboratory use. The dispensers then use that information to calculate how to generate and focus ultrasonic energy within the sample in order to eject a droplet out of the well and into a well in a plate suspended upside-down above it. Despite gravity’s pull, surface tension keeps the tiny droplets within the wells.

Michelle Palmer, a cell biologist at the Broad Institute of Harvard and MIT in Cambridge, Massachusetts, uses the Echo 555 acoustic dispenser from Labcyte to create serial dilutions from a single, high-concentration stock. At the NIH, Michael’s team uses an acoustic liquid dispenser made by Fremont, California-based EDC Biosystems to ration small volumes of the limited and precious compounds in their extensive library into plates for screening.

Extra asset
Acoustic dispensers also interrogate samples, determining how much liquid is present in each well, and the precise amount of water or precipitates the sample contains. This function comes in handy because water builds up in a sample over time when compounds are stored at ambient humidity.

Limitation
Unlike pin tools or multichannel pipettes, acoustic dispensers glide from well to well, and therefore are slower to transfer compounds from one plate to another.

Cost
Echo acoustic dispensers cost between $175,000 and $400,000 in the U.S. The tools aren’t cheap, but Ellson says customers in high-throughput labs save money in the long run by miniaturizing their process while maintaining accuracy. “We are doing things people thought were impossible,” he says.