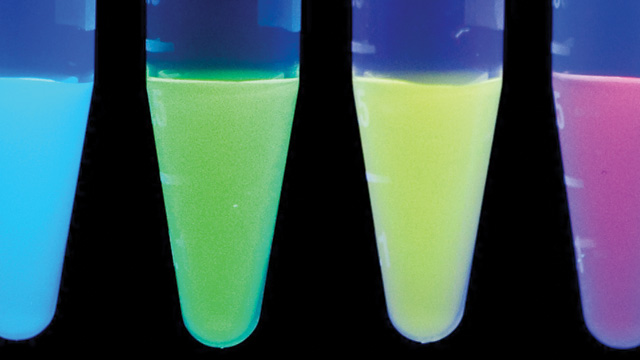 PICK A COLOR: Each tube shows the fluorescence of a mixture of a specific RNA and a synthetic fluorophore whose structure is based on the fluorescent moiety of GFP. SAMIE JAFFREY AND JEREMY PAIGE, CORNELL UNIVERSITY

Even with the amazing array of tools available to biologists studying cellular functions, watching these processes unfold inside a living cell remains a challenge. Green fluorescent protein (GFP) revolutionized imaging and the spatial understanding of how proteins interact within living cells, but a lot of information is also embedded within the production, processing, and manifold interactions of RNA.

Researchers are using RNA tracking systems to follow the paths of noncoding RNAs, the transcription of mRNA, splicing patterns, and the trafficking of RNA in development and in RNA-based disease processes. But as with all imaging techniques, you have to consider whether the labeling method will interfere with the process that you’d like to study, says...

Many RNA tracking techniques are still in development. To find what works best for your experimental system, “you have to go into this expecting to try a few different technologies,” Armitage says. That will require a bit of detective work. Some reagents are available for order from companies, but you may also need to contact principal investigators on the methods papers, either to get reagents or to learn more about how to carry out the experiment.

“Maybe five to ten years from now we’ll have a robust enough technology and enough experimental testing that there will be a nice clearinghouse for information and [researchers will] get their ideal probe,” Armitage says. Until then, to get you started, here’s a guide to the main techniques for tracking RNA within living cells. The back-story
The original technique for tracking RNA inside living cells, developed about 15 years ago, uses GFP as the fluorescent reporter molecule. Previously, researchers had used the coat protein from the MS2 bacteriophage, which binds to a defined 19-nucleotide sequence of RNA, as a way to capture RNA and RNA-binding proteins. By fusing GFP to this MS2 protein, Robert Singer and his colleagues at Albert Einstein College of Medicine in Bronx, New York, first demonstrated that they could follow RNA as it migrated within cells (Molecular Cell, 2:437-45, 1998).

The Method
The first step is adding copies of MS2’s RNA-binding sequence, which forms a characteristic stem loop structure, to the noncoding region of the gene of interest. In addition, the cells need to be transfected with a plasmid so that they can express the MS2-GFP fusion protein. There’s also an inherent problem to surmount—the background fluorescence of the fusion protein before it binds to the target RNA. Singer and his colleagues realized that they’d need to insert many copies—24, and sometimes even 48—of the MS2 stem loop within the RNA of interest to overcome this “haze of GFP” and get sufficient signal to track a single molecule moving within the cell in real time.

Researchers have used the technique in many different cell types, including yeast, Drosophila, and various mammalian cells. Singer and his colleagues have even developed MS2-GFP transgenic mice that track mRNA generated by the ß-actin gene (Nat Methods, 8:165-70, 2011). They are currently developing a second transgenic mouse, and others could use the technique to develop their own mouse models.

Pros & Cons
On the plus side, because the probes are expressed within the cell, you don’t have to worry about delivering large, highly charged reagents across the cell membrane. One potential problem, however, is that the MS2 protein includes a nuclear trafficking signal, prompting questions about whether that signal could modify the localization behavior of the RNA-protein complex. Right now, because there is only one targeting sequence, you can only track one RNA sequence at a time. The Singer lab is working on a two-color system.

Equipment and cost
Singer has contributed the plasmids encoding the MS2-GFP fusion protein and 24 copies of the MS2 stem loops to the nonprofit repository Addgene, which sells them for $65 each. Addgene receives nearly 300 requests per month for these reagents, Singer says. When MS-2 GFP fusion isn’t enough
Let’s say you want to track multiple RNAs at the same time, or you’re concerned about the effects of a bulky MS2-GFP fusion protein on the mobility of your RNA. A newer approach addresses these needs by employing smaller probes that recognize their RNA targets through complementary Watson-Crick base pairing.

The Method
Sanjay Tyagi and his colleagues at the University of Medicine and Dentistry of New Jersey in Newark developed molecular beacons designed to recognize specific sequences engineered into the noncoding region of a gene of interest. The molecular beacons are hairpin sequences of RNA with a fluorescent dye at one end and a quencher molecule at the other. When these free structures move around a cell in a closed conformation, the quencher blocks fluorescence. As the hairpin binds to the complementary RNA target, it opens and the dye lights up.

Pros & Cons
Because some RNAs are relatively rare within a cell, with an expression rate of just 20 to 50 copies, getting a reliable signal for a single molecule of RNA can still require some tweaking, says Tyagi. You’ll need multiple probes, typically 32, or multiple copies of the same probe. On the plus side, molecular beacons can be designed to recognize different sequences and glow with different colors, so you can monitor more than one RNA molecule at the same time. Tyagi and his team recently used molecular beacons labeled with two different dyes to follow splicing patterns of genes (Cell, 147:1054-65, 2011). To deliver these synthetic probes across the cell membrane, Tyagi’s team microinjects the probes directly into the cells they are studying.

Cost
Tyagi’s technology is licensed to several companies. For example, BioSearch Technologies sells molecular beacons starting at $95 for 10 nanomoles of a short oligonucleotide hairpin sequence labeled at both ends.

Hands off that RNA
Both of the previous techniques require modifying the noncoding region of the RNA you’d like to track. If you’d like to understand the behavior of completely natural, unmodified RNA molecules, you need a different system.

The method
Philip Santangelo and his team at Georgia Institute of Technology solved this problem using multiply labeled tetravalent RNA imaging probes (MTRIPs). These probes use oligonucleotides that are each labeled with two or three fluorophores of a single color and then covalently attached to biotin, which binds strongly to streptavidin, clumping the oligonucleotides together to produce clusters of about 10 fluorophores. Two or three MTRIPs targeted to different sequences on the native RNA can achieve sufficient signal for single molecules to stand out from background with up to three different dye colors (Meth Enzymol, 505:383-99, 2012).

Pros & Cons
You’ll have to find a way to deliver the MTRIPs into cells, Santangelo says. His group typically uses streptolysin O, a bacterial toxin that reversibly opens pores in the cell membrane, though it’s also possible to microinject them as Tyagi does with his probes.

Availability and cost
Although these probes are not commercially available, the components are easy to obtain and are not difficult to assemble, Santangelo says. His group estimates that it costs $0.15 per well to make a 30 nM concentration of MTRIPs using a 24-well plate (Nat Meth, 6:347-49, 2009).

Tracking hope
A new technique on the block may circumvent some of the limitations of other RNA tracking approaches.

The method
Samie Jaffrey and his colleagues at Weill Cornell Medical College in New York stripped GFP’s fluorescence down to its essence—the fluorophore that glows as the protein folds around it in a rigid structure.  But instead of stabilizing the fluorophore with a protein scaffold, he prepared an RNA library and did selection experiments to pull out RNA sequences that stabilized a small synthetic version of the GFP fluorophore and allowed it to fluoresce (Science, 333:642-46, 2011).

The minimum sequence required to induce fluorescence with the small molecule is 80 nucleotides long, and Jaffrey has christened it “Spinach.” The vegetable nomenclature riffs on widely used fluorescent proteins—such as mCherry, developed by Roger Tsien’s lab at the University of California, San Diego—that are named for fruit. Jaffrey is also working on orange and red versions of Spinach he’s calling Carrot and Radish. (See “It’s Easy Being Green,” The Scientist, January 2012.)

Pros & Cons
The method removes a step from the design process, says Tyagi, who is testing the technique in his own lab. “Now we don’t have to engineer the GFP, all we have to do is engineer the RNA.” It also avoids the delivery problems in some of the hybridization methods: the RNA sequences that bind the fluorophore are incorporated into the noncoding regions of the gene of interest, while the small-molecule fluorophore is added to the cell medium and easily crosses the cell membrane. Another perk is that unlike GFP, which can take up to 20 minutes to fold and fluoresce, Spinach becomes maximally fluorescent almost immediately, which could be useful for monitoring short-lived processes within cells, Jaffrey says. Initially, Jaffrey tested Spinach with a high-abundance, noncoding RNA in the cell. As with the other techniques, imaging low-abundance RNAs such as mRNAs may require tweaking the system, either by using concatenated sequences of Spinach, employing other colors such as red (which have less natural background fluorescence in the cell), or both.

Availability and cost
According to Jaffrey, Cornell has already licensed the technology, which could soon lead to commercially available plasmids that are specialized for particular applications. “I give [the plasmid] away to anyone who asks,” Jaffrey says, adding that chemists could synthesize the fluorophore relatively easily. The fluorophore is also commercially available: Lucerna Technologies sells 5 mg for $299.99.