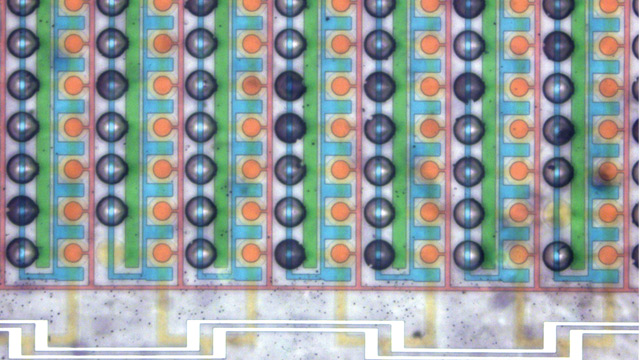 ON-CHIP PROTEIN EXPRESSION: DNA fragments inside the black circles pictured here get turned into two different proteins by pumping a transcription/translation mix through the blue channels. Fluorescent antibodies that glow when protein-protein interactions occur are located in adjacent orange circles.COURTESY OF DORON GERBER/BAR ILAN UNIVERSITYWhen Shirit Einav set out to look for new interactions between membrane-associated proteins, she was quick to skip traditional screening methods. That’s because some of the most popular ones are limited when it comes to studying insoluble membrane proteins, says Einav, an assistant professor of medicine and of microbiology and immunology at Stanford University.

The typical yeast two-hybrid approach, for example, readily detects protein interactions that occur in the nuclei of yeast cells, but it works poorly for membrane proteins, which often have trouble relocating to the nucleus and can be insoluble in this cellular compartment. Another common technique requires purifying membrane protein...

“Microfluidics is one of the most advanced technologies to overcome some of these limitations,” Einav says.

The basic microfluidic setup involves a platform about the size of a microscope slide that contains minuscule channels for samples to flow through. Although there are countless ways to design microfluidic platforms, depending on the material and on the shape, size, and number of channels, the devices share a couple of important properties. First, they allow researchers to manipulate the fluids going through the channels; second, they minimize the amount of protein needed by reducing the required volume to the microliter to femtoliter (10-15) range, making it easier to get enough hard-to-express protein to study.

Another perk of microfluidics is that it was made for automation. Scale up the number of channels, and you can study that many more protein interactions simultaneously. Researchers have designed cutting-edge setups that allow them to express proteins, or fish out interactions, right on the device itself, reducing the amount of hands-on work.

The Scientist searched out innovative approaches for using microfluidic devices to tackle protein-protein interactions. Here’s what we found.

Project: Mapping the protein-interaction network of Streptococcus pneumoniae by screening a panel of 43 proteins (Nature Methods, 6:71-74, 2009) 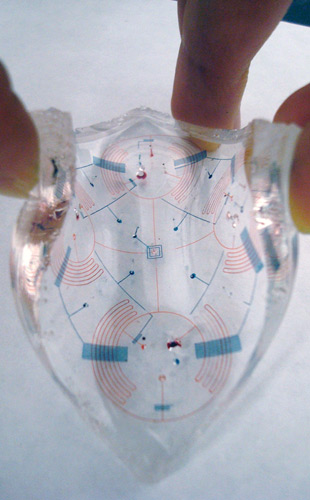 MORE FLEXIBLE MICROFLUIDICS: The device pictured above carries out four phage display reactions in one go. It consists of three layers of silicone. A phage solution flows through the middle layer (blue) over a target protein immobilized in the bottom layer. The degree of mixing is controlled by nitrogen pumped through channels in the top layer (red).COURTESY OF KELLYE CUNGProblem: Protein microarrays—slides with proteins spotted on them—could be a great tool for studying the interactions of a panel of proteins, if only they were not so impractical. They require the purification of many different proteins, which can be expensive and time-consuming. What’s more, some proteins will inevitably be unstable and misfold or degrade on the chip. “If you want to work with thousands of proteins, you’re going to have a problem,” says Gerber, who took on the challenge while a postdoc in the lab of Stephen Quake at Stanford University. Even 43 is difficult enough, he adds.

Solution: Gerber and his colleagues decided to express the proteins right on the slide, using a commercially available mixture of transcription and translation factors. They placed spots of DNA fragments, each containing the genes for two different Streptococcus proteins, on a glass slide in rows. On top of the slide, they placed a flexible polymer layer that sealed off each spot from its neighbors. Then, they piped in the transcription/translation mixture via channels in the polymer, spurring the DNA to express the two proteins. Adjacent to each spot, the researchers also dabbed a fluorescent antibody that recognized one of the newly synthesized proteins and anchored it to the slide. They used a different fluorescent antibody to fish for the second protein: if its glow could be detected on the slide, it meant that the two proteins were interacting with each other.

Gerber’s microfluidics device shrinks protein expression time from 2 days to 2 hours. Although it is too expensive for large-scale protein preps, the small volumes used for microfluidics make it affordable, says Gerber, who is now an assistant professor of life sciences and nanotechnology at Bar-Ilan University in Israel. The device also let the researchers test for protein interactions as soon as the proteins were expressed, by passing antibody through the channels right after the transcription/translation mix. As a result, the proteins were less likely to have misfolded or degraded than if they had used a traditional protein microarray, Gerber says.

Membrane extension: Einav used a microfluidics setup similar to Gerber’s to study a membrane protein of the hepatitis C virus (PLOS Pathogens, 8: e1002845, 2012). To make the viral protein, she incubated the DNA, encoding it with the transcription and translation reaction mixture in the presence of membrane fragments. As the protein was translated, it got incorporated into the fragments, which formed vesicles, providing more natural conditions for protein folding. Einav added the vesicles to the channels of her microfluidic device to test their ability to interact with cellular proteins.

Problem: A popular way to identify peptide-binding sequences in proteins is with phage display, a technique in which peptide libraries are encoded in bacteria-infecting viruses called phages and expressed on the phage surface. When target proteins are exposed to these phages, they bind—and the binding regions can be identified by sequencing the modified phage genome. But phage display only tests one target protein at a time, and homing in on the strongest binders requires several lengthy rounds of screening in which binding is tested and re-tested, says Cung.


Solution: Cung designed a microfluidic device that could screen four target proteins in one fell swoop. What’s more, it did the job in a single screening round.

Most microfluidic-based phage screens use a single polymer-based layer, with the phage solution simply flowing over the immobilized target protein. Cung’s device, however, contained three layers. The bottom layer was divided into four sections, with a target protein anchored in each one. The middle layer compartmentalized the targets by forming a lid over each section, and contained channels for injecting phage and wash solutions into each compartment. The top layer contained a series of channels for pumping nitrogen gas through the system, which applied pressure onto the layer below and vigorously mixed targets and phages. This key step ensured the number of interactions between target protein and phage library would be maximized. Cung followed the binding step with stringent washes to select for strong interactions; researchers could select for weaker interactions by washing less vigorously, Cung says.

Time Saver: Cutting out the need to culture more phages in bacteria for each screening round brought down the total time for the experiment from a week to 5 hours.

Problem: Determining one protein’s level of interaction with another is fairly straightforward in a homogenous sample: label the two proteins with different-colored fluorescent molecules and determine the coincidence between the colors—a method called fluorescence cross-correlation spectroscopy. But making these measurements in complex mixtures such as cell lysates is far trickier: if your proteins of interest are abundant, they may simply be diffusing near each other, without associating, says Jun Kameoka, an associate professor at Texas A&M University who collaborated on the project. 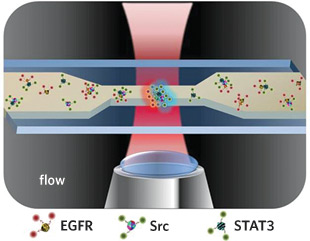 TIGHT PASSAGE: By squeezing cell proteins labeled with different-colored fluorescent tags into a microchannel, complexes of interacting proteins can be detected. The use of the technique to monitor protein-protein interactions between epidermal growth factor receptor (EGFR) and Src or STAT3, which form oncogenic signaling complexes, is illustrated here.© 2010, LAP CHIP WITH PERMISSION FROM MIEN-CHIE HUNGSolution: Hung and his team created a microfluidic detection system that allowed them to pinpoint one protein or protein complex at a time.

They fashioned a channel in a quartz wafer slide that was so narrow that only single proteins or complexes of proteins could pass through at a time. To prepare their samples, the group treated cells with a chemical that locked together any bound proteins, then lysed the cells and labeled EGFR and the EGFR binding partners of interest with antibodies bearing different-colored fluorescent molecules. They controlled the flow of the cell lysate through the channel using an electric current. As the lysate passed through the narrow channel, a UV laser excited the fluorescent molecules and a photodiode detected the fluorescent label on each EGFR molecule. If EGFR was complexed with its binding partner, the other color would be detected at the same time.

Visualization Set-up: Just about any light or confocal microscope can be retrofitted to attach to a microfluidic device, UV laser, and detectors, Kameoka says. He, Hung, and their colleagues used a company called ISS, Inc., based in Champaign, Illinois, to help them set up their microfluidic-ready microscope.

Problem: One effective approach for studying interactions between membrane proteins is to tether one type of protein to a flat membrane layer, then pass fluorescent vesicles carrying a different protein on their surface over that membrane. If the proteins on the vesicles interact with those on the membrane, the vesicles will be captured and thus detectable by microscopy. But claudin molecules bind too weakly for this to work.

Solution: Sinner and her team devised a microfluidic device that measured weak interactions indirectly, by clocking the amount of time it took vesicles to run through a channel. That time would be longer, they reasoned, if proteins on the surfaces of vesicles were forming bonds during their journey—even short-lived ones. The top layer of the two-layer device consisted of the channel, molded into a squiggly U shape so as to extend the vesicles’ travel time and thereby make differences easier to detect, Sinner says. The bottom layer contained a carbon nanotube sensor that lay perpendicular to the beginning and end of the channel. The nanotubes conducted current between a voltage source and a reader; the charged vesicles disrupted the current as they flowed into, then out of, the channel. The time between the two disruptions revealed how long it had taken the vesicles to travel.