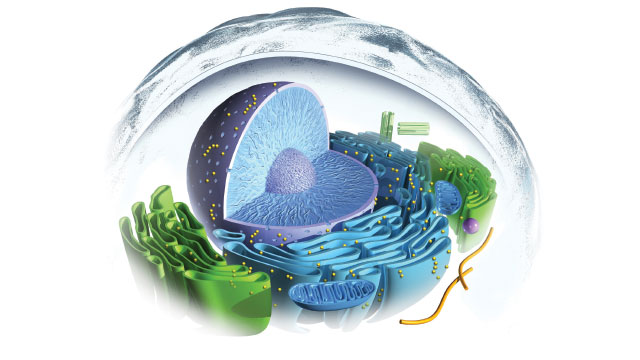 Cellular factories perform their functions by localizing and trafficking proteins into compartments where they can serve specific purposes. Because of this, a protein’s subcellular coordinates offer valuable clues about its activities.

Scientists can visualize protein distribution within cells using super-resolution microscopy—either by tagging proteins with fluorescent probes or by using antibodies. But such methods are typically not scalable and require researchers to restrict their choice of proteins to a known set.

Unbiased mass spectrometry–based proteomic methods offer a broader look, and researchers appreciate the accuracy, specificity, and scale they afford. Recently scientists have adapted the approach to study protein activity at the sub-cellular level. Dubbed spatial proteomics, this new methodology allows researchers to create detailed cellular maps and peek into the hidden life of proteins—where they live, who they interact with, and whether they move around—both in healthy and in diseased cells.

That’s an especially important question for proteins functioning in the brain. Neurons occupy more real estate per cell than other cell types, and their proteins can be widely distributed, from the central cell body, or soma, through extensions called axons, to far-reaching cellular processes called dendrites that terminate at synapses and engage in inter-neuronal communication.

One of the challenges in spatial proteomics is to isolate highly enriched cell fractions, often from tiny amounts of starting material, and then to separate organelles with minimal contamination by other cellular structures. That challenge multiplies when dealing with brain tissues, where cell diversity is high, and so amounts of different cell types are scant. The Scientist reports how some researchers are braving those odds to map thousands of proteins within the nooks and crannies of the brain.

Project: Endosomes are membrane-bound vesicles that move cargo in nearly every cell. In neurons, endosomes traffic proteins between cell bodies and axon terminals. These protein carriers are particularly critical in motor neurons, where they can present an entry point for pathogens. Because motor neuron terminals extend into peripheral body tissues, endosomes can transport viruses from the environment all the way into the central nervous system. In addition, many neurodegenerative conditions, such as amyotrophic lateral sclerosis and Alzheimer’s disease, are associated with impaired endosomal transport in neurons. “Some of those endosomes transport stress signals back to the soma, and therefore knowing the exact composition can help,” says Schiavo. “Quantitative proteomics allows us to have an unbiased view of organelles.”

A few previous reports have mapped the protein content of endosomes in a semi-quantitative manner, Schiavo says. But his team wanted to isolate the signaling endosomes at different stages of their journey from the dendrites to the soma, akin to sampling the population of vehicles at the beginning, middle, and end of a drive down the highway.

Challenge: To create that comparative spatiotemporal map, Schiavo and colleagues considered using mouse primary spinal cord motor neurons. But because those cells are derived from mouse embryos, the amount is limited by the number of animals available, and even with the same genetic background the cells vary widely between animals. In addition, the post-mitotic nature of neurons restricts the use of stable isotope labeling with amino acids in cell culture (SILAC), a method widely used to label dividing cells with “light” or “heavy” forms of amino acids.

Solution: To tackle the issues of homogeneity, quantity, and cell division all at once, the researchers used mouse embryonic stem cells, which they expanded, labeled using SILAC, and then coaxed to differentiate into motor neurons. Next, to label endosomes, the team tagged a cargo protein with magnetic nanobeads, which can be highly purified using a small magnet, Schiavo says. Finally, the team mapped the purified and labeled endosomes to get a roll call of the protein content as the vesicles move from dendrites to the cell body. Schiavo credits this “three-pronged strategy” of magnetic purification, SILAC, and using embryonic stem cell-derived motor neurons for the potency of the approach. (Mol Cell Proteomics, 15:542–57, 2016)

Future Plans: Schiavo now plans to conduct the analysis with murine motor neurons bearing mutations that lead to neurodegeneration in humans and mice, and to study problems with endosomal transport in diseased cells.

Expert Tips: Schiavo recommends making sure to use high quality stem cells. Unhealthy cells may appear morphologically identical to healthy cells, but they do not transport as efficiently, and the yield of endosomes can be compromised. Also, the magnetic probe should be fresh for efficient transport, he says.

Project: Borner’s group wanted to pinpoint the location of all the proteins in a given cell at once and rapidly map out multiple subcellular compartments without purifying each organelle. They also sought to detect changes in the location of proteins under variable conditions, such as before and after drug treatment. In addition, cell signaling processes often lead to proteins relocalizing between cellular compartments, says Itzhak. “We wanted to know what’s moving inside the cell.” 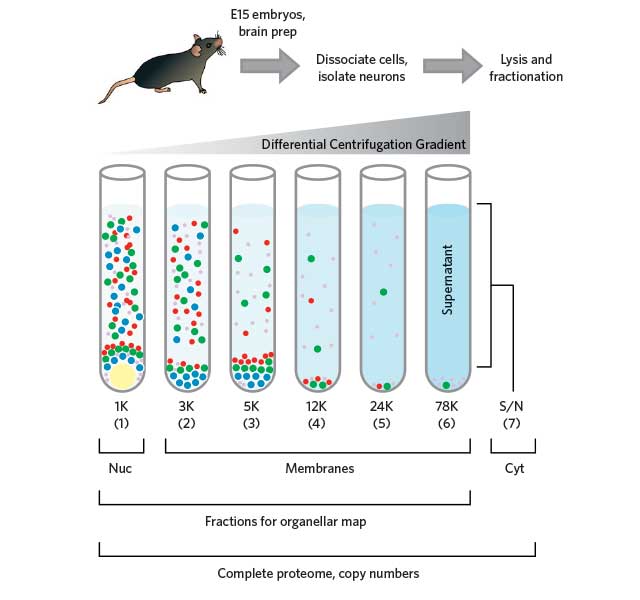 PROTEIN PIN-DOWN: To track protein movements within a cell, researchers at the Max Planck Institute of Biochemistry developed a technique called Dynamic Organellar Maps, which could reliably compare protein maps between two experimental conditions. Here, they isolated cortical neurons from embryonic mice, lysed them, and separated the contents into six fractions based on organelle size and density. Proteins residing in different parts of the cell separated out in these fractions (different colored balls above). By using differential centrifugation and a relatively small number of fractions, the team could control for technical variation between experiments, and thereby track whether a protein moved from one fraction into another after a drug treatment, for example.CELL REPORTS, 20:2706–18, 2017

Challenge: Globally mapping proteins to capture their dynamic movements from one organelle to another is difficult because of the high variability between spatial proteomics experiments. The variability occurs because with every experiment, the contents of the separated subcellular fractions differ, making it impossible to compare the proteome data from one condition to another.

Solution: To work around that, Itzhak and colleagues developed an approach they call Dynamic Organellar Mapping, a method that allows researchers to chart protein movements globally. The team tested the technique on HeLa cells and mouse primary neurons. They used either unlabeled cells, cells marked using SILAC before they were lysed, or cells that were chemically labeled after lysis using a mass spec chemical labeling technique called tandem mass tagging (TMT). Borner’s team then enriched organelles into distinct fractions, performed mass spectrometry, and analyzed the resulting data. With machine learning, they were able to cluster and localize proteins using markers known to tag the surface of specific organelles. They then repeated the experiments and compared results after treating the cells with epidermal growth factor, or EGF, which is known to initiate a signaling cascade and protein relocalization. The team found that the movement of a select few known proteins clearly stood out after EGF treatment. (Cell Reports, 20:2706–18, 2017)

Expert Tips: What makes the technique possible is its repeatability between experiments, Itzhak says. That comes from the ability to keep cellular fractions similar enough between experiments: Itzhak and his collaborators used differential centrifugation, which pellets molecules into multiple tubes based on their size and density, instead of isopycnic separation, which separates molecules into layers inside the same tube and is harder to control, Itzhak says. In addition, the team separated cell organelles into six fractions instead of more, which allowed similarity between replicates. Taking fewer fractions allows proteins of a wider size and density range to group together, whereas taking more fractions makes the ranges too narrow so proteins on the range edges could fall in one or the other fraction—and thus increase variation.

Future Plans: Borner’s lab plans to apply the technique to cell or animal models of neurological diseases and cancer. But mass spectrometers must get faster, cheaper, and use smaller amounts of starting material for this assay to become mainstream, says Itzhak.

Project: If probing neurons was not complex enough, tumors in the central nervous system up the ante, because cells in the margins versus the center of the tumor typically have different proteomic profiles. Dilillo and McDonnell wanted to image glioblastoma tissue sections to get a complete picture of where different proteins were located across tumors. 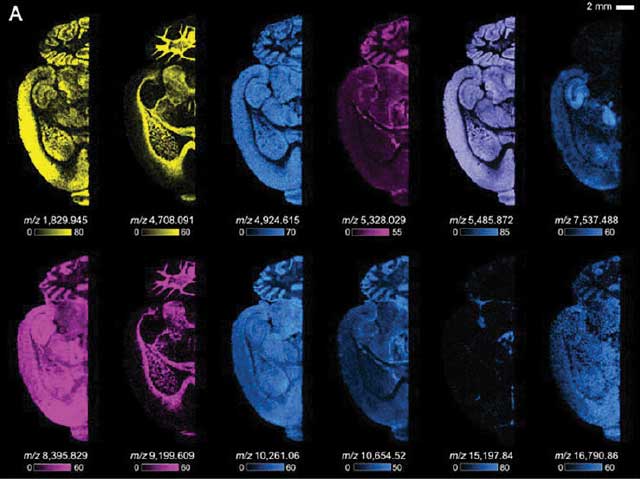 COLOR BY PEAKS: Jeffrey Spraggins’ lab at the Vanderbilt University School of Medicine, Nashville mapped rat brain proteins using high mass resolution mass spectrometry-based imaging, an effort replicated by Dilillo and colleagues to map intact proteins in mice glial tumor tissues. Shown here is MALDI FTICR imaging data from sectioned rat brain tissue, in which each ion image depicts a protein with a different mass to charge ratio. The image is constructed based on peaks in the overall mass spectrum by plotting the ion intensity against the relative position of the data in the tissue. (Panel B) (Proteomics, 16: 1678–89, 2016).JEFFERY SPRAGGINS, doi:10.1002/pmic.201600003

Challenge: Generally, spatial proteomics relies on fractionation to separate out organelles from distinct parts of the cell. But fractionation doesn’t work when researchers want to visualize intact biomolecules in tissues of interest. A tweak to mass spectrometry imaging provides a solution; Instead of breaking down proteins into peptides, as mass spec usually does, matrix-assisted laser desorption/ionization, or MALDI, uses a sheet of laser energy–absorbing molecules spread over a particular tissue. When scientists shine a laser on the sheet, it generates heat, which in turn releases ions from the large intact proteins within the sample. The resulting ions can be converted into images by plotting the ion intensity against the relative position of the data in the tissue. However, MALDI coupled with traditional time-of-flight, or TOF, analysis does not clearly distinguish biomolecules with tiny differences in mass and charge, such as protein isoforms frequently seen in tumor tissues.

Solution: As a workaround, the team employed MALDI-FTICR, or Fourier-Transform Ion Cyclotron Resonance, which determines the mass-to-charge ratio of ions by recording the frequency at which each ion rotates through a magnetic field. Thus, different ions are not detected at different times as with TOF methods, but all at once during the detection period. This improves signal-to-noise ratio and resolution. Dilillo used this method to map mouse glioblastomas, comparing results obtained with TOF versus FTICR. “You can get beautiful images of protein ions using MALDI imaging,” Dilillo says. “We could acquire the full distribution of all ions all over the tissue section.” (Scientific Reports, 7:603, 2017)

Dilillo also complemented her analyses by laser-dissecting specific areas of interest in the glioblastoma, and then running peptides from the dissected cells through a traditional peptide-based mass spectrometer. “You can identify thousands of proteins using [traditional peptide mass spec], and you can get spatial distribution with MALDI imaging,” she adds. “The two techniques put together make it really robust.”

Future Plan: Dilillo next wants to perform both MALDI imaging and laser capture microdissection on the same tissue section to minimize variation. The idea, she says, is to first perform imaging and identify regions of interest using the data, then microdissect only those areas to analyze using traditional mass spectrometry.

Expert Tips: Mass spectrometry experiments are extremely specialized, and all the techniques involved in this paper were specifically designed and optimized for the glioblastoma tissue Dilillo’s team worked with. “So keep your specific goal in mind,” she says. “And standardize the technique for your tissue.”