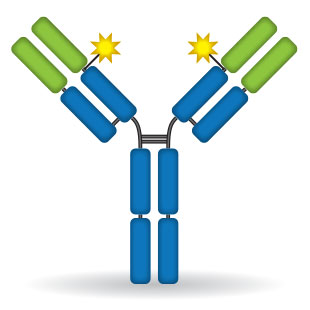 CYS MARKS THE SPOT: Genentech’s THIOMAB strategy involves engineering cysteine residues into the antibody backbone to provide defined points for drug conjugation.COURTESY OF GENENTECHUntil relatively recently, chemotherapies for cancer have walked a precarious line between maximizing tumor cell death and minimizing toxicity. With few exceptions, physicians simply had no way to direct these potent drugs solely to where they were needed.

Now, they do. Using antibody-drug conjugates (ADCs), oncologists can aim a chemical payload at any cell for which they can identify a specific antigen, such as the HER2 receptor on breast cancer cells.

ADCs—tripartite structures in which antibodies are covalently joined to toxins via a linker—are the biological equivalent of a smart bomb. In theory, the configuration renders poisons inert as they circulate through the body, preventing them from doing harm until they are released and activated inside the targeted cell, and pharmaceutical companies have embraced...

What does it take to make a good ADC? A good antibody and a potent drug, of course, but also good design. For instance, pharmacokinetic properties can vary dramatically depending on the number of drug molecules an ADC carries, says Jonathan Drachman, chief medical officer and executive vice president of research and development at Seattle Genetics. When antibodies are loaded too heavily, he says, they tend to clear more rapidly from circulation, and also to aggregate. Drug developers thus strive to control precisely how many drug molecules each antibody molecule bears. The sweet spot is typically a drug-to-antibody ratio of two or four.

A related and critical variable is the drugs’ positioning on the antibody. Avoiding an antibody’s antigen-binding site is a must, but there’s more to it than that. In 2012, researchers at Genentech demonstrated that an ADC can have very different properties depending on the chemical environment of the amino acids that surround a toxic molecule, a finding they attributed to the stability of the chemical linkage under those different conditions (Nat Biochem, 30:184-89, 2012).

ADC developers have devised multiple strategies for ensuring their molecular cargoes end up precisely where they want them. These technologies have been commercialized by pharmaceutical companies, but they typically spring from academic labs. According to Vaughn Smider, an assistant professor of cell and molecular biology at the Scripps Research Institute in La Jolla, California, who penned a recent review on ADC conjugation strategies using unnatural amino acids (Mol Pharmaceutics, 12:1848-62, 2015), researchers can generally direct conjugation with little more than site-directed mutagenesis and some easily available plasmids. “It may not be plug-and-play, like getting a GFP vector; a research lab would have to do a little optimization,” he says. “But it’s not an enormous undertaking to get it up and running.” Here are four options.

The two ADCs currently approved for market, Genentech/Roche’s Kadcyla and Seattle Genetics’ Adcetris, couple their payloads via endogenous amino acids in the antibody sequence—lysines in the case of Kadcyla and cysteines for Adcetris. Neither approach allows researchers to precisely control drug placement and abundance, as there are more conjugation sites available than needed in both cases. Although ADCs typically carry two or four drug molecules, antibodies have eight available cysteine attachment sites and “probably 70 surface-exposed lysines, at least,” according to Hans Erickson, associate director of the ADC and Therapeutics Proteins group at Genentech Research and Early Development. That results in a heterogeneous mixture: some efficacious antibodies, some antibodies with no drugs attached, and others with too many, which can be unstable and toxic.

In 2008, Genentech published a more precise approach. Called THIOMAB, the strategy allows control of exactly where drug/linker complexes are attached by engineering the antibody genes to replace one or more amino acids with cysteine, thereby providing a defined and selectable chemical handle upon which to attach another molecule (Nat Biotechnol, 26:925-32, 2008).

Other ADC developers have adopted similar strategies. For instance, Seattle Genetics’s SGN-CD33A, entering Phase 3 trials in 2016, is based on what that company calls “engineered cysteine antibody,” or EC-mAb technology.

REMOVING BLOCKS
Though simple in concept, THIOMABs do require some careful chemistry. When antibodies are synthesized, Erickson explains, the engineered cysteines are sometimes blocked due to modification by free cysteine or glutathione in the cell culture media, preventing them from coupling to the drug-linker complex. To get around that, researchers subject the protein to relatively gentle reducing conditions. That removes whatever might be bound to the engineered cysteines, but also breaks interchain disulfide bonds, which are not the intended drug targets. Allowing those bonds to reform yields a molecule in which the only available conjugation site is the engineered cysteine. 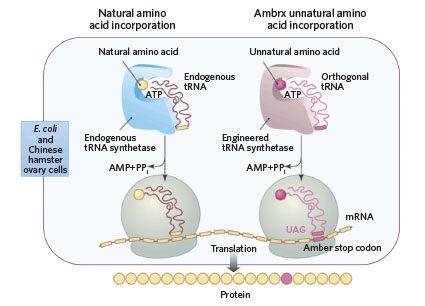 Schultz and his team have spent years extending the genetic code beyond its normal complement of 20 amino acids, essentially teaching cells to insert nonnatural (or noncanonical) amino acids wherever and whenever the researchers want.

During translation, enzymes called aminoacyl-tRNA synthetases (aaRSs) couple specific amino acids to their cognate transfer RNAs, preparing the tRNA molecules for their role in translating the language of RNA into that of proteins. Phenylalanine aaRS, for instance, links phenylalanine to tRNAs targeting the codon UUU. Schultz engineered an aaRS to accept amino acids not normally found in nature, such as para-acetylphenylalanine, and place them onto a special tRNA that recognizes an amber codon, one of the stop codons that typically indicate the termination of protein synthesis. This series of genetic alterations directs the cell not to terminate translation when it encounters the amber stop, but to insert an unnatural amino acid instead.

Schultz then expresses the new enzyme and tRNA in a host cell from a different species (a necessary precaution to avoid confusing the host cell’s translation machinery and to ensure high fidelity), feeds the cell the new amino acid, and lets nature take care of the rest. All researchers need do is modify their gene of interest with the amber codon in the desired location and their protein will be endowed with new chemical functionality.

“This is a very precise process, and the cell will do the job for us, incorporate the nonnatural amino acid anyplace we want,” says Ambrx Chief Scientific Officer Feng Tian.

To date, Schultz and others have incorporated more than 100 nonnatural amino acids into proteins, and he founded Ambrx in 2003 to commercialize the technology. One of the company’s most popular choices, para-acetylphenylalanine, introduces a chemical group called a ketone that is not otherwise found in proteins. In the presence of hydroxylamine, proteins bearing the ketone group form a highly specific, irreversible bond under physiological conditions, a strategy Ambrx researchers exploited in 2014 to couple the highly potent microtubule-targeting agent auristatin to antibodies targeting both breast and colorectal cancers, producing homogeneous ADC preparations (PNAS, 111:1766-71, 2014).

The company has implemented this system in both bacterial and mammalian cells. The first human Phase 1 trial of an ADC built using mammalian technology, an anti-HER2 conjugate called ARX788, kicked off at the end of 2015, Tian says.

MAMMALIAN MALADIES
Those researchers wishing to try this approach with their own antibodies can obtain the necessary constructs for bacterial expression from Schultz, or from Addgene, which offers a handful of the lab’s materials. But for mammalian cell work, the process is considerably more challenging. “We created a mammalian cell line that stably expresses the tRNA and the synthetase in the genome of CHO [Chinese hamster ovary] cells, and that is very difficult to create,” Tian says.

While the other companies in this roundup rely on cells to produce their antibodies, Sutro Biopharma has gone in vitro.

The company, located in South San Francisco, has taken an approach similar to Schultz’s and converted it into a simple, scalable, cell-free biochemical reaction: mix cellular extract and DNA, incubate, and voilà! “Ten hours later, you’ve got a gram per liter of whatever protein you want to make,” says CSO Trevor Hallam.

To keep translation running smoothly, the extract contains an energy-recycling system that uses glutamate and an intact citric acid cycle to drive ATP regeneration, Hallam says. “It’s as if we are running a living system in a test tube.”

The primary advantage of the cell-free approach, says Hallam, is flexibility. Traditionally, for every antibody version researchers want to test, they have to transfect and express that gene in a different cell clone. But cell-line development takes months, and protein production must also compete with the cell’s own needs, limiting yield. A cell-free approach separates the preparation of the protein-producing extract, the raw material of this process, from that extract’s use, Hallam says, making it a simple matter to test dozens of variants simultaneously and rapidly scale up the most promising hits.

In one case, he says, Sutro researchers created and tested 450 different versions of a Herceptin ADC, which targets the HER2 receptor on breast cancer cells, using a library of gene mutants, each bearing an amber stop codon in a different location. “It took us five days to find the optimal binding site [for the drug linker],” he says. “The speed for design is incredibly fast.”

DOUBLE TROUBLE
Want to use multiple chemistries simultaneously? It’s possible, Hallam says. Sutro has incorporated two different synthetase-tRNA pairs, which override two different stop codons, into its extracts. “You can have two different nonnatural amino acids in one protein, and conjugate that to two different linker warheads,” he says. “And you still produce a homogeneous molecule.” Those researchers who want to create their own extracts can find details in the work of company cofounder James Swartz of Stanford University, who first developed the cell-free protein expression technology Sutro uses today (e.g., Nucleic Acids Research, 41:5949-63, 2013). 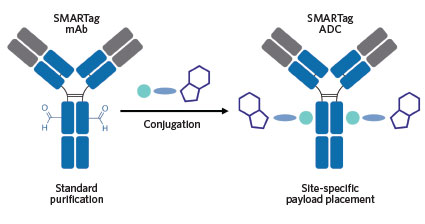 A SMART ALTERNATIVE: Catalent SMARTag ADCs are created by inserting an enzyme recognition sequence into the antibody chain. The enzyme, called FGE, converts a specific cysteine residue in the antibody to formylglycine, providing a unique chemical handle for drug conjugation.COURTESY OF CATALENT BIOLOGICS/REDWOOD BIOSCIENCECatalent Pharma Solutions, based in Somerset, New Jersey, uses a chemistry called SMARTag, which it obtained as part of its 2014 acquisition of Redwood Bioscience, to endow antibodies with novel chemistries.

According to David Rabuka, founder of Redwood and now global head of research and development for Chemical Biology at Catalent, SMARTag exploits formylglycine-generating enzyme (FGE), which locates cysteine residues in the context of a specific signal sequence and converts them to formylglycine, a residue not normally found in proteins.

“This is a very simple chemoenzymatic method to engineer a chemical handle, a sticky bit, on the surface of a protein that can then be chemically modified,” Rabuka says.

To use this system, researchers need only introduce the signal into their protein sequence and express it in eukaryotic cells that also express FGE; the purified protein will be ready to go with its cysteine-to-formylglycine conversion already complete, Rabuka says. Then, using a simple and gentle one-step chemical reaction called HIPS ligation, researchers can link anything from fluorophores to drugs in an irreversible, site-specific manner, says Rabuka.

In one proof-of-principle study, Redwood researchers used SMARTag to build several variants of Herceptin ADCs that differed only in where on the antibody the signal sequence was located (Bioconjug Chem, 25:1331-41, 2014). The exercise, Rabuka says, underscores the importance of drug placement in ADC design. “We see dramatic differences in efficacy.”

GET SMARTAG
Stemming from work by Stanford University’s Carolyn Bertozzi (then at the University of California, Berkeley), the FGE expression plasmid is available at Addgene (Nat Chem Biol, 3:321-22, 2007). As for the HIPS reagents, Rabuka says Catalent is partnering with a company called Click Chemistry Tools to bring those to market. “We hope they will be available in the next six months,” he says.