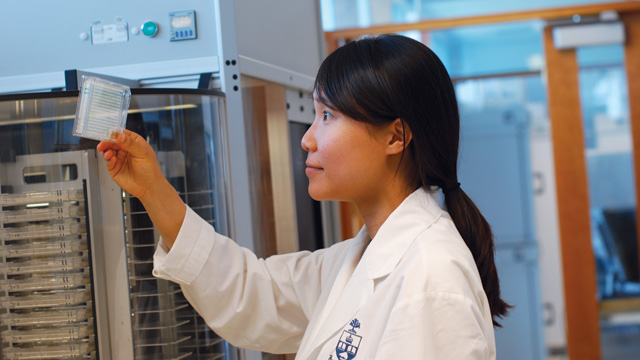 ROBOT CENTRAL: A grad student examines a yeast colony array from the 192-plate carousel of one of eight BioMatrix robots housed together in Charles Boone’s lab at the University of Toronto, where his lab studies gene networks in yeast. KAREN FOUNK

Charlie Boone’s lab at the University of Toronto doesn’t think small. His 21-member group is trying to map gene networks in yeast at the genomic scale. To do that, they introduce two different, relatively benign mutations into the same haploid yeast strain, then look for lethal combinations.

“That’s a genetic interaction,” explains Michael Costanzo, a senior research associate in the lab, “a genetic relationship that tells us that the two genes probably work together and somehow compensate for each other.”

The process is simple enough. S. cerevisiae of one mating type and bearing one mutation are mated to cells of the opposing mating type harboring a different mutation,...

But there’s a catch: to fully map the organism’s genetic circuitry, Boone’s team must be comprehensive, testing every possible pairwise combination—some 18 million, in duplicate. At that scale, manually manipulating colonies with toothpicks and pipettors won’t work. The team needed a different kind of tool.

“Robotics became important the minute genomes were sequenced,” Boone says, “because we now saw all the genes and we could start thinking of manipulating them all at once in various assays.”

Today, Boone’s lab is tricked out with a battery of microbiological robots (which you can check out on his groovy Sgt. Pepper’s Lonely Hearts Club Band-inspired website), including machines from Singer Instruments (RoToR, ~$80,000 USD) and S&P Robotics (BioMatrix BM3-SC ~$110,000 to $180,000, depending on options). Most labs can get away with a far smaller investment, if they need any at all. If you’ve been on the fence about whether your microbiology lab would benefit from automation, read on; we’ll walk you through some of the key considerations.

Is automation right for you?

Unfortunately, there’s no easy answer to this question. It depends on the application, the scale of the experiments, expected number of colonies and conditions (such as pairwise combinations) being tested, frequency of those experiments, and anticipated future needs—not to mention finances. Bart Deplancke, an assistant professor at the Swiss Federal Institute of Technology who uses yeast one-hybrid assays to detect protein-DNA interactions, automated his lab from the get-go. He used some 450,000 Swiss francs from his startup package and an equipment grant from the Swiss National Science Foundation to buy a custom-built Tecan robotics system to run the lab’s transformation assays. With his anticipated workload, that investment made sense.

“I envisioned screening literally hundreds if not thousands of different [DNA] elements,” he says. “If you’re only interested in, say, a couple of genes or a couple of DNA elements, then obviously this is clearly not worth it.”

Still, plenty of microbiology labs use automation for smaller-scale work. And not just for speed; automation ensures consistent quality and accuracy. Gray Crouse, professor of biology at Emory University in Atlanta, studies DNA repair mechanisms in yeast. The work involves lots of colony counting, a tedious effort that is not so much a learning experience as a time sink. Crouse felt that time could be put to better use, so he ponied up about $15,000 for an automated colony counter—a Synbiosis ProtoCOL 2. Now, counting that used to take hours is done in minutes, he says.

But Crouse’s purchasing decision wasn’t only about time savings, he says; he also factored in who was doing the counting. Undergrads, he explains, are relatively inexpensive, and they are paid to perform such menial tasks. Wasting hours of grad student or postdoc time is different, he says. “That becomes more expensive and it becomes more of an issue.”

What are my options?

Just about any routine and repetitive microbiology task can be automated. Besides the standard plate-filling robots and other liquid handlers, there are also automated colony counters, colony pickers, replica platers, and more.

At the Center for Cancer Systems Biology (CCSB) at the Dana-Farber Cancer Institute, researchers run proteome-wide yeast two-hybrid screens to identify protein-protein interactions in humans, yeast, worms, and plants. This is a group that does yeast two-hybrid work on a grand scale; David Hill, Associate Director of the CCSB, estimates the lab has performed hundreds of thousands of cloning reactions in the past few years just to feed its pipeline.

The CCSB has a pair of Qiagen Bio-Robot 8000 instruments dedicated to automating mini-prep work, plus traditional liquid-handling robots (Tecan Genesis and Tecan Freedom EVO, for which they paid approximately $250,000 each) that can duplicate plates, set up matings, cherry-pick and re-array clones, and so on—tasks that drive the lab’s yeast two-hybrid experiments. (The BioRobot 8000 is no longer available, but a comparable Qiagen BioRobot Universal System costs about $110,000, the company says.)

In cherry-picking and re-arraying, selected clones from a set of source plates are picked and transferred to fresh plates, to collect all positive clones from a primary screen, for instance. The colonies in this case are not randomly distributed, as they would be on a streaked agar plate or a pour plate; instead, they are arrayed as on a microtiter plate, from which they can easily be picked by pin tools. Replica plating is just what it sounds like, making a duplicate of the colonies on one plate by transferring to another, possibly at a higher density (e.g., copying four 384-well plates to one 1536-well plate), to test growth on different media, for instance.

Commercial re-arrayers/cherry-pickers and replica platers are widely available, including the Genetix QPix2, SciRobotics’ Pickolo (available on Tecan Freedom EVO robots), and the S&P Robotics BM3-BC. Some systems can handle both tasks. The BM3-BC, for instance, can be outfitted with a cherry-picking tool with 96 “separately addressable” pins.

John Reece-Hoyes, a research associate professor in the laboratory of Marian Walhout at the University of Massachusetts Medical School, uses a Singer Instruments RoToR HDA replica-plating robot in his work studying protein-DNA interactions. (It features, among other things, an optional corkscrew or beer bottle opener “free of charge,” according to Anna Singer, the company’s director.)

According to Reece-Hoyes, robotics enable the lab to work with 1,536-colony plates, a format that is simply too dense for use with manual pipettors or re-arrayers. Now, screens that used to require 40 plates can be completed with just three, he says. In one case, the lab tested 50 bait strains against some 1,000 transcription factors, a task that took a PhD student in the lab two years to complete manually, but which could be repeated in just two weeks using robotics.

Also available for microbiology labs are colony counters and automated plate pourers. For those working with standard petri plates (most robotic systems use microtiter plate-formatted dishes), the MP-1000 automated dish-filling system (for 100-mm plates, list $19,735) and MM9 bench-top media sterilizer (soon to be discontinued, but currently available for $22,615) from New Brunswick Scientific (now a division of Eppendorf) autoclave and dispense some 7L of culture medium at a time. Crouse, whose lab uses both instruments, estimates his team pours probably 300 to 600 plates per week. The system, for which he paid “a bit under $36,000,” enables him to maintain consistent volume from plate to plate, and to minimize contamination.

What are the variables

If you do decide to automate, there are several variables you should consider before making a purchase.

First, what exactly does your protocol require? Will you need to transfer colonies only from one solid medium to another (as in a mating protocol), or do you plan to migrate back and forth between liquid and solid cultures or solid cultures and PCR or sequencing reactions? Pin-based systems—picture a block with 96 or 384 nails poking out—work differently from traditional liquid handlers, so make sure whatever configuration you choose will meet your needs.

What about other processing steps, such as incubation, shaking, or centrifugation? Automating such tasks requires a more sophisticated robotics system. Deplancke’s custom Tecan installation, for instance, can transform about 750 DNA sequences simultaneously into yeast on two 384-well plates. The system features two on-deck incubators set at 30°C  and 42°C , a centrifuge, and an arm to transfer plates from one station to the other.

Other key considerations are speed and throughput. Some robotic systems can transfer an entire plate’s worth of cells at a time using a 96- or 384-well pin array; others use 1 or, say, 8 pins (one column of a 96-well plate). Some employ disposable tips (which cost money, increase waste, and must be kept on hand), whereas others must be cleaned after every step in which the pins or tips are dipped in a solution (a necessity that adds time to each transfer operation). Also, not all systems offer “walk-away” automation. If plate stackers aren’t standard equipment, a technician will need to be on hand to exchange plates as the run proceeds.

Make sure colony counters and pickers can accurately identify your colonies of interest. Can they differentiate colonies based on size, color, sheen, or shape, if necessary? And, how quickly do they work? Tecan’s colony picker can pick at a rate of 800 colonies/hour and can integrate that step into a workflow of automated cloning experiments. But some pickers can move nearly an order of magnitude faster.

Perhaps the biggest decision is whether to invest in a more flexible, programmable system, such as a Beckman Coulter Biomek or Tecan Freedom EVO, or to stick with what Food Network personality Alton Brown calls a “unitasker”: a dedicated system with a specific function, such as a replica plater.

If you anticipate performing the same task over and over again, a unitasker might make sense, says Hill. “But your money may be better spent looking . . . at an open-architecture system that has many more capabilities and that will give you the flexibility to do more than just one thing, albeit with a steeper learning curve.” Indeed, Deplancke spent nearly a year and a half getting his custom platform just right, he says. “Everything just took more time than I anticipated.”

What about inexpensive alternatives?

Most labs have no need to automate microbiology tasks. But that can easily change. A lab dealing with just a handful of genes may suddenly find itself wanting to test a few hundred. Fortunately, there are alternatives to robotics.

The simplest option is a multichannel pipettor. It’s tedious, to be sure, but for a one-off experiment, such an approach may be sufficient. Thermo Scientific’s Matrix Equalizer Pipettes, for instance, are available in 9- and 12-channel models with adjustable tip-to-tip spacing, and the Matrix Electronic Multichannel Pipette also comes in a 16-channel configuration. Either model can accommodate up to 384-well plate formats. (See “Little Squirts,” The Scientist, February 2012.)

For block transfers of 96 or 384 colonies at once, manual plate replicators, such as V&P Scientific’s Library Copier tool, provide templates for copying one plate to another. Crouse uses a Boekel Microplate Replicator ($466 from Fisher Scientific) to transfer colonies into solution for PCR analysis. “We are not doing it at a scale where we could justify any fancy robotic equipment,” he says.

Each lab must find its own balance, all agree, and it’s not always obvious where the tipping point between manual and automated lies. Generally speaking, if a process is only performed occasionally or is only mildly tedious, it’s probably not worth it to automate. Says Reece-Hoyes, “If you are only doing a few screens or assays at a time, you could perfectly well use velvet [manual plate replicators] or 96-spot replicators that are vastly cheaper than the system that we use.”


Editor's Note: Since the publication of this article, supplier costs and exchange rates have increased the price of Singer Instrument's ROTOR to ~$100,000 USD.