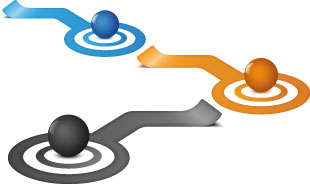 © ITSDESIGNNET/ISTOCKPHOTO.COMThe complex, ever-changing multitude of proteins present in a cell or tissue at any given time, referred to as the proteome, is difficult to capture and describe. Molecular biologists have a variety of tools at their disposal to study proteins, but arguably none is more powerful for the comprehensive analysis of proteins present in a complex sample than mass spectrometry.

Traditionally, researchers have used one of two mass spec–based approaches to tease apart the complexities of the proteome: a discovery-based strategy to identify as many proteins as possible, and a targeted approach to accurately quantify a few select proteins of interest. Regardless of the method used, researchers typically begin by chopping up the proteins in their sample using enzymes that slice them at specific amino acid sequences into peptides of about 8–22 amino acids, depending on the enzyme used. The resulting peptides are then separated by liquid...

In a conventional discovery, or “shotgun,” experiment, the mass spectrometer is operated in a so-called data-dependent acquisition (DDA) mode, in which the instrument first performs a survey scan that records the masses of all the peptides present in the sample. Then the machine isolates individual peptides, fragments them into smaller pieces, and records the masses of those fragments. The resulting spectra can reveal the sequences of the fragments, and can also be used to search spectral libraries to identify the proteins that the peptides may have originated from.

However, because a mass spectrometer operating in DDA mode cannot scan quickly enough to acquire fragmentation spectra for all of the peptides entering the instrument at a given time, it automatically selects peptides for fragmentation based on their signal intensity. As a result, peptide ions present in low abundance escape detection. And due to the random process by which ions are selected for fragmentation, discovery proteomics experiments tend to have low reproducibility.

Although many proteomics researchers originally turned to mass spec to try to discover new proteins, “the crazy thing about it was that what we are identifying are largely peptides from predicted gene products,” says Michael MacCoss, a protein chemist and professor of genome sciences at the University of Washington whose lab develops mass spectrometry tools and techniques. “What we really need to be able to do is take these things that genomics tells us are there and then be able to quantify them over large numbers of samples. We began to feel that it was more important to measure a couple of things really well than to measure a lot of things poorly.”

Enter targeted proteomics, where the goal is to accurately and reproducibly quantify one or a few proteins in a sample. Most targeted proteomics experiments are performed on a triple-quadrupole mass spectrometer—essentially, two quadrupole mass analyzers separated by a collision chamber—using a technique called selected reaction monitoring, (SRM), which has been used for decades for the targeted analysis and quantification of small molecules.

In a typical targeted workflow, researchers first identify peptides that uniquely represent the protein of interest and calculate the m/z values and the fragmentation patterns of those peptides. This information is used to program the instrument to focus on a particular peptide ion-fragment ion pair, known as a “transition.” The mass spectrometer can also be programmed to monitor several different SRM transitions from the same sample; such an approach is referred to as multiple reaction monitoring (MRM). Once programmed, the instrument then separately isolates each peptide ion with one of the predefined m/z values; only those selected peptides undergo fragmentation, and the instrument quantifies just the fragment ions it has been programmed to look for.

SRM/MRM approaches are highly sensitive and can be used to analyze peptides from proteins present in low abundance, even from highly complex samples. And once an SRM assay has been developed and validated, it should provide reproducible results between experiments and across different laboratories. But developing an assay is not easy, and requires a significant investment of time to optimize. For labs experienced with the approach, it can take two weeks or longer to develop an SRM assay, says Andreas Huhmer, proteomics marketing director for life sciences mass spectrometry at Thermo Scientific.

In the last few years, researchers have been developing mass spectrometry–based proteomics methods that help to overcome the biased nature of discovery proteomics and increase the speed and efficiency of targeted proteomics. Here, The Scientist surveys some of the newest approaches. 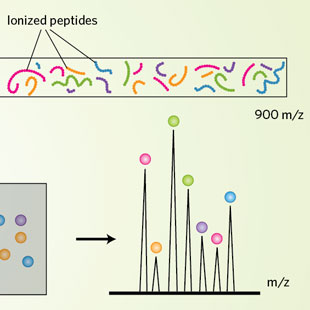 SIMULTANEOUS ANALYSIS: In parallel-reaction monitoring (PRM), the mass spectrometer isolates a target peptide ion, subjects it to fragmentation, and analyzes the masses of all fragment ions simultaneously.
See full infographic: JPG | PDFTHE SCIENTIST STAFFOVERVIEW: Parallel-reaction monitoring (PRM) is a targeted approach that was first described by Joshua Coon, a professor of chemistry and biomolecular chemistry at the University of Wisconsin–Madison (Mol Cell Proteomics, 11:1475-88, 2012). His group developed the technique using a mass spectrometer from Thermo Scientific called the Q Exactive, which is similar to a triple-quadrupole instrument except that the final quadrupole mass analyzer has been replaced by a high-resolution analyzer called the Orbitrap.

HOW IT WORKS: As in an SRM assay, the first mass analyzer selects specific peptide ions of interest for fragmentation. Unlike SRM/MRM, however, which monitors only a few select fragment ions and does so one at a time, a PRM experiment monitors all fragment ions at once.

ADVANTAGES: Because all of a given peptide’s fragment ions can be monitored with PRM, “you don’t have to waste your time figuring out which product ion transitions are the best to go look for,” says Coon. That can dramatically simplify the design of the experiment. Furthermore, having all the peptide’s fragment ions present in the same spectrum can help to confirm the identity of the peptide. The high resolution and accurate mass measurements also help to distinguish the peptides of interest from the background, which can be an advantage when analyzing peptides in complex mixtures.

CHALLENGES: Users will still need to spend some time optimizing the instrument parameters for the isolation of the specific peptide ions of interest.

OVERVIEW: Data-independent acquisition (DIA) is an alternative to data-dependent acquisition (DDA) that selects peptides for fragmentation independent of their signal intensity, or concentration. Thus, DIA helps to overcome the bias of DDA for abundant peptides. The technique was first described in 2004 by John Yates of the Scripps Research Institute in La Jolla, California. (Nat Methods, 1:39-45, 2004). Since then, many DIA methods have been published using a variety of different types of instruments from various vendors.

HOW IT WORKS: In a traditional DIA experiment, the mass spectrometer isolates and fragments all peptide ions that fall within a relatively wide, predetermined mass window, and then sequentially scans through nonoverlapping windows of the same width until the total desired mass range has been covered. For example, a popular DIA approach known as SWATH (sequential window acquisition of all theoretical mass spectra), which can be performed on the TripleTOF systems made by AB SCIEX, analyzes and fragments all peptide ions within a range of 400–1200 m/z using 32 consecutive isolation windows that each span 25 m/z. (See “Proteome Portraits,” The Scientist, August 2012.) 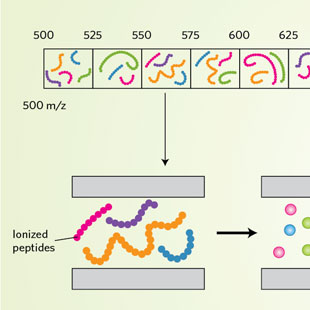 ALL TOGETHER NOW: In data-independent acquisition (DIA), the mass spectrometer isolates all peptides that fall within a relatively wide mass window, subjects all the peptides from that window to fragmentation, and analyzes the masses of all the fragment ions simultaneously. The instrument then processes all of the peptides in each subsequent, nonoverlapping window until the entire mass range of interest has been covered.
See full infographic: JPG | PDFTHE SCIENTIST STAFFFor the most part, the analysis of data from early DIA approaches relied on database-searching strategies for DDA methods to attempt identification of all the peptides in the fragmentation spectra. However, such an approach proved very difficult because the fragmentation spectra generated by DIA methods tended to be much more complex than those from DDA experiments. More recently, alternative strategies have been developed that use fast-scanning, high-resolution, and more accurate mass instruments and involve targeted analysis of the data for peptides of interest, rather than attempting to identify all of the peptides in a spectrum.

ADVANTAGES: DIA is very easy to set up on a mass spectrometer, because the method requires no prior knowledge about the peptides of interest. And since the instrument doesn’t select peptides for fragmentation based on signal intensity, DIA “is not limited by the dynamic range problem that’s inherent in DDA approaches,” says James Bruce, professor of genome sciences at the University of Washington, who recently developed a DIA approach known as FT-ARM (Fourier transform–all reaction monitoring; J Proteome Res, 11:1621-32, 2012). “And as compared to SRM, we don’t need to do any method development for any particular peptide targets that we need to go after.”

Another advantage of DIA, compared with an SRM/MRM approach, “is that you’re not throwing any data out,” says Jason Held of Washington University in St. Louis, who used a SWATH approach to analyze posttranslational modifications of the receptor tyrosine kinase, ErbB2 (Int J Proteomics, 791985, 2013). Users can continually mine the data over time for new peptides of interest.

CHALLENGES: Even with the recent improvements in instrumentation and analysis, DIA data is very complex. And it can sometimes be difficult to identify the fragments corresponding to a peptide of interest, because there can be a lot of interfering signals in the data that arise as a result of the wide windows used to isolate peptide ions. “It’s a brute force method,” says Huhmer. “It may sometimes collect too much, and you can have so much noise in the data that you can only use a portion of [the data collected].” 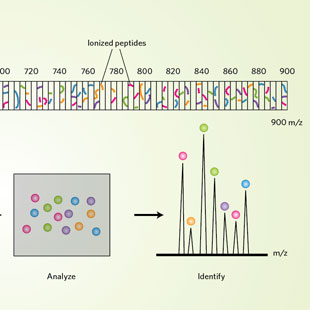 REDUCING NOISE: In multiplex DIA, the mass spectrometer isolates all peptides that fall within five, randomly selected, relatively narrow mass windows, subjects all the peptides from each window to fragmentation, and analyzes the masses of all the fragment ions simultaneously. The instrument then processes all of the peptides in subsequent sets of five, randomly chosen, nonoverlapping windows until the entire mass range of interest has been covered.
See full infographic: JPG | PDFTHE SCIENTIST STAFFOVERVIEW: To make it easier to detect and quantify proteins in DIA data, the University of Washington’s MacCoss and his colleagues developed a technique known as multiplex DIA (Nat Methods, 10:744-46, 2013). The approach can still cover a wide mass range like DIA, but has improved precursor peptide-ion selectivity and generates a less noisy chromatogram, the collection of spectra acquired during a run.

HOW IT WORKS: Instead of isolating peptides sequentially using mass windows that are, for example, 20 m/z wide, multiplex DIA simultaneously selects peptides from five, randomly chosen 4-m/z windows. Each subsequent scan randomly chooses another set of five nonoverlapping windows, until the entire mass range of interest has been analyzed. MacCoss says that different combinations of isolation-window width and number can be used, depending on the mass range that needs to be covered and the complexity of the sample.

ADVANTAGES: Each multiplex scan “still covers 20 m/z worth of data, but has the selectivity of 4-m/z [windows],” MacCoss says. Those smaller isolation windows help to reduce the chances that a given window will contain other peptides that generate fragment ions similar to or the same as those of the peptide of interest.

CHALLENGES: For now, MacCoss says the technique only works on the Q Exactive mass spectrometer, because that machine is capable of isolating peptide ions from multiple, nonconsecutive isolation windows, fragmenting them, and storing them prior to mass analysis. 