The mammalian brain consists of billions of neurons wired together in various circuits, each one involved in specific physiological functions. To better understand how these different neurons and circuits are associated with mental activities and diseases, researchers are reconstructing detailed, three-dimensional maps of neural networks.

However, 3-D imaging of the mammalian brain is challenging. Light scatters as it travels through layers of tissue, dispersed by a variety of molecules such as water, lipids, and proteins. This reduces image resolution.

One way to improve resolution is to reduce the scattering. Researchers achieve this by first removing water and lipids from tissue. Next, chemicals are introduced that have a refractive index—a measure of how much the molecules bend light that passes through them—in the range of that of proteins. Establishing near-homogenous refractive indices in the molecules that populate the tissue environment allows light rays to converge to...

Researchers have performed brain tissue clearing with limited success, as the chemicals available were too harsh on delicate neural tissues. In 2013, Karl Deisseroth and his team at Stanford University revolutionized the approach with a hydrogel-based technique called CLARITY. This technique enabled researchers to label neurons in mouse neural tissue with fluorescent markers and then to image an entire mouse brain without sectioning it, while preserving the fluorescence signals.

Since then, tissue clearing methods have continued to improve as researchers have developed chemical mixtures that better preserve tissue architecture and protein structures. The latest techniques are also compatible with fluorescent labels. When they are integrated with advanced tissue processing methods such as automated cell counting, researchers can identify neurons and even intracellular components with ever-improving precision.

Here, The Scientist highlights some of the recent innovations that combine emerging tissue clearing and tissue processing techniques for high-resolution imaging in the brain.

Problem: Many tissue clearing methods rely on organic solvents or detergents, which degrade lipid cell membranes, as well as lipid-based dyes that are typically used to stain neurons and intracellular organelles.

Approach: Zhu and her team developed a tissue clearing method called RTF (Rapid clearing method based on Triethanolamine and Formamide) that is compatible with lipid-based dyes (Sci Rep, 8:1964, 2018).

RTF is a solution containing water, formamide, and a high refractive index chemical known as triethanolamine. In a serendipitous accident, another lab found that formamide, a chemical commonly used in buffers for molecular biology applications, could clear tissues. Some tests suggest that formamide most likely partially denatures proteins, lowers their refractive indices and brings them closer to those of water and lipids. This helps to create a environment with greater uniformity in refractive indices.

The team showed that after clearing a mouse brain with RTF, the fluorescence signals of endogenous proteins and a lipid-based dye called Dil, which is widely used to stain axons, were not quenched.

Downsides: RTF is unable to clear adult mouse brain tissue that is more than one millimeter thick. There is also an undesirable shrinkage of about 2 percent to 5 percent in cleared tissues, which can reduce the accuracy of imaging tissue architecture and neural networks.

Time frame: Unlike other techniques, which take about a week for clearing soft brain tissues, RTF clears tissues after a day of chemical incubation. The process is also reversible: cleared tissues can be restored to their original state by soaking in saline. This is useful for long-term storage because cleared tissues are less stable.

Tips: To optimize tissue transparency, Zhu recommends adjusting the clearing time outlined in their protocol. Although RTF is not commercially available, the reagents are cheap and can be bought off the shelf. The setup for clearing is also simpler than most other tissue processing techniques, Zhu says.

CLEARING BOTH HARD AND SOFT TISSUES

Problem: Existing clearing solutions are not optimized to clear both soft tissues, such as brain and spinal cord, and calcified hard tissues such as bone at the same time. This makes it challenging to visualize intact connections between the central and peripheral nervous systems, because peripheral nerves in the spinal cord are connected to the vertebrae, and vertebrae are too opaque for imaging.

Approach: Zhao and team developed a procedure, which they named PEGASOS  (the polyethylene glycol associated solvent system), to clear both soft and hard tissues at the same time (Cell Rese, 28:803–18, 2018). The process is similar to other clearing protocols except it uses polyethylene glycol (PEG) for enhanced fluorescence preservation and contains two additional steps: decalcification of hard tissues and decolorization of colored tissues such as liver, which looks red because it contains high levels of iron. For those working with small body parts, the tissues can be passively immersed in chemical reagents. Alternatively, clearing solutions can be circulated throughout the body using a perfusion pump for whole body clearing.

The researchers used PEGASOS to trace single axons between two different segments of the spine of rats and to visualize neurons within the spinal cord without surgically separating them from the vertebrae. They also visualized the 3-D distribution of nerves within the bone marrow and found that nerves are spatially enriched in certain bone regions.

What’s next? Tissue shrinkage may not be uniform for all types of tissues. Zhao plans to develop an improved chemical formula of PEGASOS to overcome this challenge. The team also plans to reduce the autofluorescence—natural emissions from the body’s proteins that can create noise in the data—that is associated with tissue shrinkage.

Tips: Tissue clearing is just the first step, says Zhao; the subsequent imaging and data processing are more challenging. He suggests new users start with thin tissue slices and not an entire organ to familiarize themselves with the entire workflow. The technique uses off-the-shelf reagents; Zhao estimates that clearing an entire mouse brain costs about $30.

ENLARGE FOR A BETTER VIEW 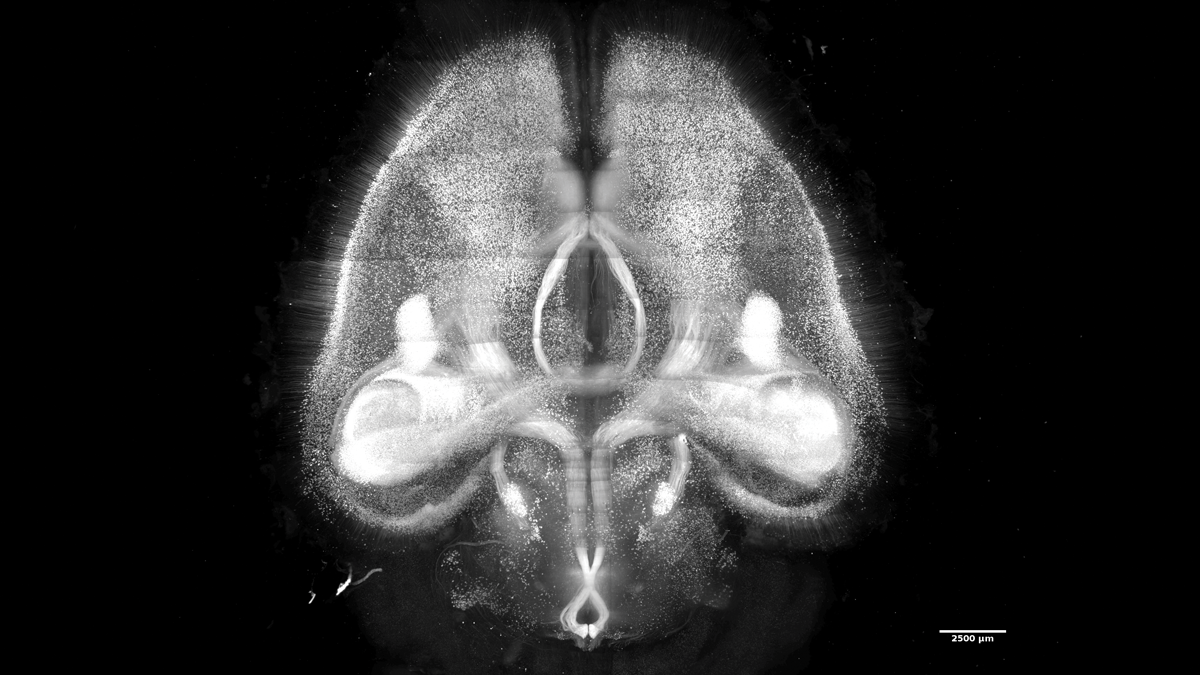 Approach: After screening close to 1,700 chemicals, Ueda and his colleagues developed a method, named CUBIC-X, for expanding brain tissue after clearing it (Nat Neurosci, 21:625–37, 2018). They immersed the tissue in hydrophilic (water-loving) reagents identified through the chemical screen, enlarging the volume of the brain approximately tenfold—the optimal volume expansion, as tissues can become fragile after that. Using their protocol, Ueda and his colleagues were able to image entire 1 cm–thick mouse brain without losing any cells. And because the expanded tissue is 99 percent water, the refractive index stays mostly the same throughout the brain’s layers. This causes tissues to become transparent and allows nearly 100 percent light transmission for single-cell resolution imaging.

Downsides: The chemicals used to expand tissues tend to quench fluorescence signals for labeling neurons and subcellular components such as RNA.

Timeframe: Tissue clearing with CUBIC-X takes about 16 days for a whole mouse brain.

What’s next? In the future, Ueda hopes to apply CUBIC-X to other organs, including heart and lungs. He also plans to use the technology to clear the brains of larger mammals such as nonhuman primates and humans.

Tips: The researchers created the CUBIC-Atlas, an open access mouse brain atlas with single-cell annotation. Users can compare their data to the atlas to assess the reproducibility of brain clearing. CUBIC-X is commercially available ($50 for 25 mL, which is enough for one mouse brain; Tokyo Chemical Industry). 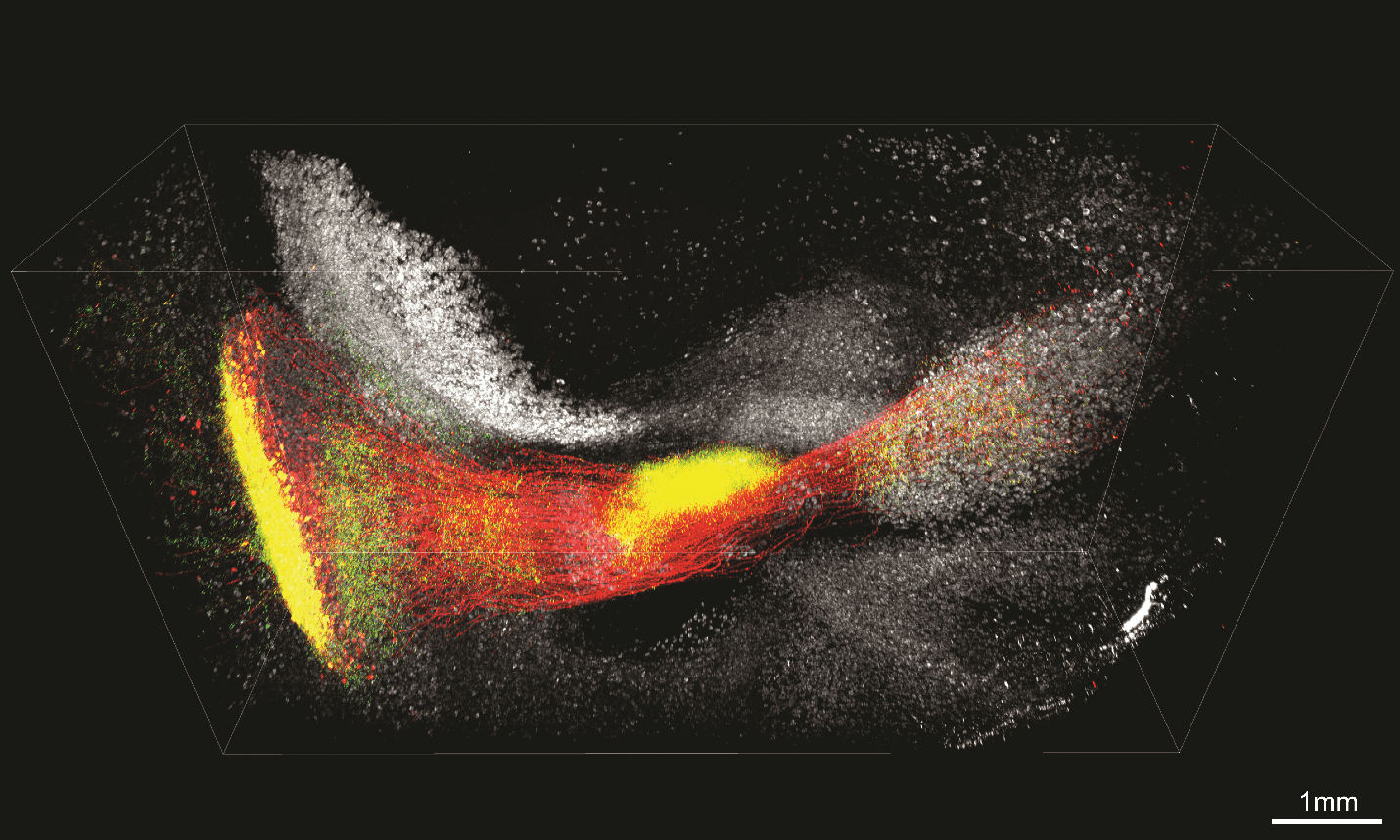 Approach: Chung and his colleagues turned to a material called polyepoxide to solve this problem. Commonly known as epoxy resin, polyepoxide is widely used in the aerospace industry as glue to provide structural support to weaker materials such as wood. On a molecular level, it helps maintain protein structure. This is important because small changes in a protein’s 3-D shape can cause it to lose its fluorescence and binding abilities.

The team screened six types of epoxides and used computational simulations to identify the one that best preserved the fluorescence of green fluorescent protein (GFP). They then infused the chosen epoxide into the brain tissues of mice genetically modify to express GFP in neurons. There, the epoxy reacted with GFP to form flexible chemical bonds. These bonds protected GFP from denaturation during tissue clearing, and allowed GFP to refold back into its natural conformation after tissue clearing.

Chung and his colleagues showed that their technique, which they named SHIELD (Stabilization to Harsh conditions via Intramolecular Epoxide Linkages to prevent Degradation), maintained fluorescent protein signals. It also protected the ability of proteins to bind to antibodies and RNA transcripts to RNA probes after tissue clearing (Nat Biotechnol, 37:73–83, 2019). The team combined SHIELD with tissue clearing with CLARITY to image 2 mm–thick segments of human brain and mouse brain with single-cell resolution.

What’s next? The team plans to apply SHIELD to larger organs and even tumors. They are also developing an improved system to facilitate antibody penetration through tissues for faster labeling.

Tips: Due to epoxide processing, SHIELD-treated tissues are stiffer and have a slower antibody penetration rate, so antibody labeling will take two days longer for a whole mouse brain. SHIELD is available through Life Canvas Technologies. A 500 mL kit ($1,000) is sufficient for clearing about 16 mouse brains.

Andy Tay is a postdoc at Stanford University and a freelance science writer based in California. He can be reached at andy.csm2012@gmail.com.