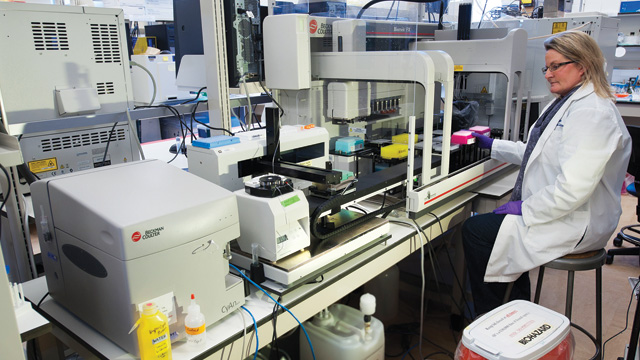 In the world of high-throughput screening, it’s all about efficiency: how many compounds can you test, at what cost, and using how little in the way of materials? In such an environment, cell-free and cell-based microtiter plate assays, such as ELISA and cell imaging, typically hold sway, as these are relatively cheap, low-volume, and amenable to automation.

One technology that has not usually been associated with high-throughput screening is flow cytometry, which traditionally has been long on content—the amount of data points possible per cell—but short on throughput—the number of samples that can be run in a day. But that, says J. Paul Robinson, director of Purdue University Cytometry Laboratories, is changing. As a screening platform, Robinson says, flow cytometry “is starting to gain some...

For one thing, screening assays often involve adherent cells, but many cells, especially immune cells, live in suspension. “Imaging is really not the best way to analyze those kinds of samples,” says Thomas Duensing, vice president of product development at IntelliCyt Corp. Flow cytometry, however, in which fluorescently labeled cells are interrogated one by one with one or more lasers and a detector, is ideal for suspension cells, and is in fact a key tool of immunology research. The technique is also a single-cell method, meaning it can be used to study, among other things, mixed cell populations.

Yet until recently, flow cytometry has had one serious drawback. In standard operation, flow cytometers typically accept samples in test tubes, which is both ponderous and reagent-intensive. Many instruments can be outfitted with a well-plate “sipper” that can accept microtiter plates, but that addresses only the sample-number drawback. “They’re miserably slow,” says Robinson.

Now, however, through a combination of new intake systems, new hardware, and new methodologies, researchers and instrument vendors have given flow cytometry a long-overdue makeover. The Scientist spoke with the experts about how to give flow cytometry the throughput and content it needs to serve as a screening platform. Here’s what they said.

Problem
In drug screening, it’s not enough to look at homogeneous cells in isolation or to study individual biological pathways. To truly understand what’s going on, you have to explore the entire signaling network in the context of a natural, diverse cell population.

Solution
In 2008, Nolan published a study in which he used “phosphospecific flow cytometry” or “phosphoflow”—a flow cytometry setup in which fluorescent antibodies target intracellular phosphoproteins—and a sample barcoding strategy to boost the number of samples he could analyze simultaneously in a standard flow cytometer (Nat Chem Biol, 4:132-42, 2008).

The team took advantage of fluorescent parameters that can be resolved on a BD LSR II cytometer from BD Biosciences to study, in primary mouse spleen cells, the effect of five different doses of eight Jak-Stat signaling pathway inhibitors on two-dozen pathways in some five cell types: neutrophils, B cells, CD4+ T cells, CD8+ T cells, and “CD11b-intermediate cells.”

The barcoding strategy the team used, known as fluorescent cell barcoding, chemically labels each sample (say, one well of a microtiter plate) with two fluorophores in differing concentrations: four concentrations of Alexa Fluor-700 and six of Pacific Blue, producing 24 discrete combinations. By marking the cells in each well with reactive dyes in a signature combination of fluorescence intensity and emission wavelength—as well as exposing all samples to six additional colors on antibodies targeting the proteins of interest themselves—and then mixing those samples in a single tube, the team increased their effective throughput 24 times. After the instrument run, they deconvolved the resulting signals to determine which cell populations belonged to which sample.

Individual Responses
Because flow cytometry is inherently a single-cell technique, Nolan and his team were able to detect differences in how discrete cell types respond to specific inhibitors. These effects are masked when looking at whole blood or whole spleen preparations, the authors note.

Pros & Cons
Fluorescence barcoding is an inexpensive way to boost throughput: the reagents are not commercially available, but they cost “nearly nothing to set up,” Nolan says. That said, researchers adopting the technique should consider the rigors of analysis, as their data will have to be untangled to assign each signal to the sample it came from. Solution
With a normal flow cytometer, McClellan explains, it simply isn’t practical to test 20,000 samples. “Your arm would be paralyzed from putting tubes on and [taking them] off all day long,” he says. Even if it were practical, it isn’t possible to do so in one or even two days, which would throw off the study’s time course.

Not Just For Suspension Cells
Now at the University of South Alabama’s Mitchell Cancer Institute, McClellan plans to purchase an IntelliCyt HTFC Screening System ($136,500), which couples the HyperCyt to a four-color flow cytometer, for drug discovery work in solid tumors. His team will be using the system to screen for drugs that can attack cancer stem cells. Confocal-based imaging and plate-based biochemical assays will form the other two pillars of the group’s integrated drug discovery workflow.

Pros & Cons
Flow is faster than imaging, but imaging provides richer data, he says. “The flow [cytometry] will help steer us as a primary screen,” he explains. “Then we can go back and do much more sophisticated imaging-based [analyses] to refine the second level.”

Problem
For all their throughput pluses, phosphoflow and fluorescent barcoding barely scratch the surface of intracellular signaling networks. To really understand how inhibitors perturb the cell, dozens of nodes must be tracked simultaneously.

Solution
One key issue with flow cytometry is that while it’s theoretically possible to combine 18 colors in a single antibody panel, in practice it is extremely challenging to hit even 12. Spectral overlap—the bleeding of one color channel into another—“is the boogeyman in every flow cytometry core,” says Nolan. As a result, it can take months of optimization to design and test a panel, and most researchers stick to four or maybe 8–10 parameters if they are technically able, he says.

Nolan has recently begun exploring a new concept in flow cytometry, called “mass cytometry.” Performed on a CyTOF mass spectrometer sold by DVS Sciences (Nolan serves on the company’s scientific advisory board), mass cytometry uses heavy metals such as lanthanides as molecular tags rather than fluorophores. Instead of exciting a cell with a laser and reading the resulting fluorescence, the CyTOF zap-fries it in a superheated plasma, measuring the resulting ions—that is, the protein signals—by their molecular mass (See “Flow Cytometry for the Masses,” The Scientist, Nov/Dec 2011).

Unlike fluorescence, mass spectrometry doesn’t suffer from spectral overlap, so it is easier to combine many more markers, Nolan says, adding that even first- or second-year graduate students can design highly multiplexed experiments with just a couple of months’ training. Nolan, who has purchased three CyTOFs at around half a million dollars apiece, has published 35-plex panels, and his lab has already pushed that to 45, he says; 100- to 200-plex panels are not far off.

Network Analysis
In one study, postdoc Bernd Bodenmiller, with colleague Eli Zunder, used a 34-element panel to probe inhibitor impact on cytokine signaling networks in more than a dozen different cell populations in whole blood. By probing so many distinct proteins and cells, Bodenmiller says, the team could view cellular signaling as an integrated network, rather than as pathways in isolation. That, he says, led to a powerful finding: that the compounds invariably produced more complicated signaling disruptions than the two scientists had anticipated—a molecular indicator of side effects. “This was really striking.”

Pros & Cons
CyTOF’s monumentally high information yield comes at a price: $650,000–$700,000. “That competes extremely well with high-end flow cytometers,” says Nolan. “For the value added, in my opinion, it’s a steal.” But the system is also relatively slow, processing about 500 cells/second, and requires an entirely new set of chemistries in the lab, as each antibody has to be coupled to its own heavy metal. And of course, CyTOF-analyzed cells cannot be sorted, as they are destroyed during the process.

Researcher
J. Paul Robinson, Director, Purdue University Cytometry Laboratories, and a Past President of the International Society for Advancement of Cytometry

Problem
Take one 1,000-compound library plus multiple cell lines, factor in replicates, controls, and a range of doses, and you’re looking at hundreds of thousands of samples.

Solution
Robinson hooked up his lab’s ultrafast Beckman Coulter CyAn flow cytometer (scan rate: 70,000 particles/second) to the IntelliCyt HyperCyt sample intake system. Instead of sampling the wells of a micro-titer plate one by one and delivering them to the cytometer, HyperCyt samples them en masse, aspirating wells one by one and separating them with air bubbles to create a “train” of samples that can be processed in as little as 3 minutes, IntelliCyt’s Duensing says.

Robinson used his HyperCyt-fed CyAn flow cytometer, aided by an automated liquid handler and automated incubator, to prepare and run seven-color fluorescence studies of human blood, reserving a few color channels for cell identification and the balance for mitochondrial functional assays. Even at the relatively tame speed of 5,000 to 15,000 cells per second, the team can sample a 384-well plate in just 8 minutes, Robinson says. “That’s really high throughput.”

CAUTION: Data Overload
In fact, the throughput is so high, Robinson had to shut down his project for a few months to code software that could handle the resulting information deluge. “Flow cytometry [data] analysis was always difficult,” he says, “but it’s orders of magnitude more difficult when you have orders of magnitude more samples.” The program he designed, Plate Analyzer, is available as a free download.