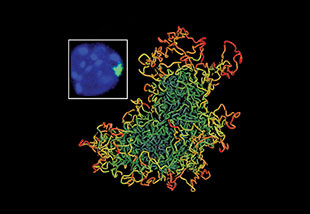 MODELING DNA: Fluorescence in situ hybridization (FISH) in a mouse T cell nucleus shows the X chromosome in green and all other chromosomes in blue (inset); a 3-D model of the mouse X chromosome from single-cell Hi-C data (right). COURTESY OF TAKASHI NAGANO AND TIM STEVENSA Google image search for “chromosomes” gets you thousands of pictures showing condensed, X-shaped mitotic chromosomes. There’s just one problem with those images, says Peter Fraser, head of the Nuclear Dynamics Programme at the Babraham Institute in Cambridge, U.K.: “That’s really not very characteristic of what your genome looks like in your cells.”

Most cells, Fraser says, are not dividing, and their genetic material is relatively loosely coiled. But that doesn’t mean it’s randomly strewn about. The nucleus in general and chromosomes in particular are highly regimented, with DNA domains folding and looping into dynamic structures that vary over time as cellular state...

Chromosome structure has a profound effect on cellular biology, with regulatory elements needing to form great genetic arcs to reach promoters located hundreds of kilobases away. On a larger scale, groups of genes and their regulatory elements assemble into domains measuring about a megabase apiece. These domains appear to serve as the structural units of chromosomes, and though physically distinct, they can interact with one another over large distances, leading to even more complex chromosome folding. Ultimately, says Fraser, those different organizational levels impact gene expression itself—a fact that motivates the National Institutes of Health’s recently announced 4D Nucleome program, which aims to unravel the spatial organization and temporal dynamics of the nucleus and chromatin and their influence on biology and disease.

For years, imaging-based approaches were the only way to determine chromosome conformation, but those methods are technically demanding and spatially limited. Then, in 2002, Job Dekker, while a postdoc in Nancy Kleckner’s lab at Harvard University, figured out a way to study conformation through DNA sequence (Science, 295:1306-11). The technique he developed, chromosome conformation capture (3C), uses PCR to determine whether two specific DNA segments which are distantly separated in linear DNA are nonetheless closely associated in space due to chromosome folding.

3C is the grandfather of most conformational-analysis techniques used today. But it and its descendants aren’t the only options molecular biologists have in their toolboxes. The Scientist interviewed experts on chromosome conformation about the methods they use in their labs. This is what they said.

SOLUTION: 3C is sometimes called a one vs. one technique because it is used to measure individual interactions between selected pairs of genomic segments. In the technique, cellular chromatin structure is frozen in place with a crosslinker such as formaldehyde. Restriction enzymes cut the DNA and the resulting ends are then ligated together to physically link the two previously separate strands. The crosslink is then reversed to release the now-connected DNA fragments. Finally, researchers probe for specific physical interactions by using PCR to amplify across their ligation junctions.

Although 3C can be used to identify specific long-range contacts, it is difficult to apply to multiple genomic segments at once, as each interaction requires a separate PCR reaction. So Dekker’s team developed several variants of the procedure. Hi-C uses next-generation DNA sequencing to probe all possible interactions genome-wide (all vs. all), but it is an expensive and computationally demanding approach.

5C (chromosome conformation capture carbon copy) represents an intermediate approach (many vs. many) that scales 3C up into the range of dozens or even hundreds of interactions. Researchers prepare oligos representing all chromosome regions of interest—typically a couple hundred per megabase, according to Dekker. These oligos are designed to fall precisely on either side of the restriction enzyme cut sites, such that when they anneal to the 3C product they produce a small gap that can be closed with DNA ligase. Amplification and deep sequencing of the resulting ligation products indicates which interactions occurred for all of the selected regions (Genome Res, 16:1299-1309, 2006).

As part of the ENCODE project, Dekker’s team used this approach to probe interactions between 628 transcription start sites and 4,535 “distal restriction fragments” across 1 percent of the human genome in three cell lines (Nature, 489:109-13, 2012). The results, Dekker says, show that, contrary to the conventional model of one enhancer pairing with one gene, genes can interact with multiple enhancers, and enhancers with multiple genes.

“3-D contacts between genes and regulatory elements are really surprisingly abundant,” he says.

EASING BOTTLENECKS: With hundreds of oligos required for some studies, 5C oligonucleotide design can be a bottleneck, Dekker concedes. His lab’s public My5C website (my5c.umassmed.edu) contains tools for 5C primer design, data upload, and data analysis. An updated Web tool, which will be a one-stop shop for 5C, Hi-C, and other related methods, is slated for release in the near future.

HI-C AT THE CELLULAR LEVEL

PROBLEM: 3C-based methods average the data from thousands or millions of cells, obscuring cell-to-cell variation and producing an averaged conformation.

SOLUTION: “The only way to really understand what the chromosome looks like would be to study single cells,” Fraser says.

So his team, led by senior research associate Takashi Nagano, worked out a way to take Hi-C to that single-cell level. The major procedural difference, says Fraser, is that Nagano performed most of the Hi-C reaction steps in intact nuclei rather than after cellular lysis, as is typically done. He then isolated individual cells, completed the reaction, and deep-sequenced the resulting material (Nature, 502:59-64, 2013). “It was a simple but elegant change,” Fraser says.

Fraser and Nagano applied their method to male T cells, which, like all male cells, have only a single X chromosome. They recovered about 2.5 percent of the chromosome, from which they assembled low-resolution models of the molecule’s structure, which are vaguely reminiscent of the Everlasting Gobstoppers in Willy Wonka and the Chocolate Factory. Subsequent methodological improvements have enabled the team to scale up to model the entire genome of haploid cells, of which they recover about 30 percent at 10-kbp resolution.

NOT JUST EYE CANDY: How do you validate a model of something never previously seen? Fraser says he plans to correlate Hi-C with 3-D imaging and fluorescence in situ hybridization (FISH) data sets to ensure the data conform to reality. So far, though, the models seem grossly accurate. “When we first started making the models, I thought they were really just sort of interesting to look at, maybe a bit of eye candy. But they’re actually a bit more robust, and as far as we can tell so far, they seem to reflect the actual structure of chromosomes.” 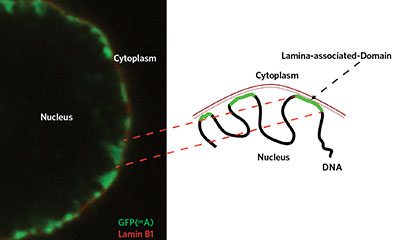 PROBLEM: Nuclear organization isn’t static, and it isn’t random. Kind needed a way to track those segments of DNA that had been near the nuclear envelope (and thus were relatively silent) and then moved away over time.

SOLUTION: Kind is a postdoc in the lab of Bas van Steensel, who developed a method for distinguishing chromatin that was pushed up against the nuclear envelope from chromatin that was not (Nature, 453:948-51, 2008). Called DamID, the method relies on a bacterial methyltransferase (Dam), which methylates adenine residues in the context of a GATC sequence—a modification that does not normally occur in eukaryotic cells. By coupling Dam to a protein in the nuclear lamina layer that undergirds the nuclear envelope, DamID covalently marks lamina-associated DNA.

Using this method, van Steensel had demonstrated that a substantial fraction of nuclear DNA is found in so-called lamina-associated domains (LADs), which are highly condensed and relatively silent, while actively transcribed DNA is located more centrally in the nucleus.

It is, Kind says, like “a factory where you would have people working on conveyor belts in the middle of the factory, and anything that you don’t need and would just be standing in your way, you could just place it against the wall.”

Kind wanted to see if lamina-associated sequences ever swapped places with more active DNA. He built a fluorescent reporter comprised of GFP fused to the methyladenosine-binding domain of a methylation-sensitive restriction enzyme (m6A-Tracer), and coexpressed it in mammalian cells alongside a fusion between Dam and a protein component of nuclear lamina called Lamin B1. He then used a microscope to track fluorescence localization in individual cells as they grew and divided.

The data suggest that 3-D conformation is relatively stable in interphase cells, Kind says, but not in cells that are dividing. “We found that the genome that was localized towards the nuclear lamina in the mother cells, in the daughter cells was pretty much all over the place.” As his team wrote in the article detailing these results, the chromosomes were “stochastically reshuffled” (Cell, 153:178-92, 2013). That’s a surprising observation, Kind says, because it implies that daughter cells don’t necessarily inherit the epigenetic state of their parents.

GET THEE TO A BIOINFORMATICIAN: Like most chromosome-conformation methods, DamID and m6A-Tracer require no special tools. “The difficulty comes in the bioinformatics,” Kind says. Each experiment requires new software to process and make sense of the data. Kind has now developed a single-cell variant of DamID, which he is using to map the cell-to-cell heterogeneity of nuclear organization, but the technique is still unpublished.

PROJECT: Mapping the architecture of a long noncoding RNA

SOLUTION: Long noncoding RNAs may serve as “very general readers or effectors” of chromosome architecture, Chang says. Yet researchers understand little about how they work, including their shape. “It’s hard to describe the behavior of something and understand it if you don’t know what it looks like.”

Chang adapted a method his lab developed called chromatin isolation by RNA purification (ChIRP). In ChIRP, chromatin is crosslinked in situ, just as in 3C, but the isolated sequences are pulled down using biotinylated oligonucleotides complementary to a noncoding RNA of interest. Once isolated, the complexes can be dissociated to reveal associated RNA-binding proteins or genomic DNA.

Chang’s team wanted to work out the architecture and modular functionality of a long noncoding RNA called roX1, which is implicated in X chromosome dosage compensation in fruit flies. The team developed a variant of ChIRP called dChIRP (domain-specific ChIRP), which performs the pull-down using pools of oligonucleotides representing distinct functional domains of a given transcript. The resulting material can then be subjected to deep sequencing to identify associated chromatin, western blotting to identify bound proteins, or RT-qPCR to identify bound RNAs (Nat Biotechnol, doi:10.1038/nbt.2943, July 6, 2014). Resolution is on the order of tens of bases, Chang says.

dChIRP produced sharper, more intense signals than ChIRP alone, Chang’s team found. Based on their analysis, they determined that the roX1 transcript contains three RNA “fingers” that interact with its chromosomal and protein targets, the most 3’ of which (D3) can mitigate the male lethality caused by roX1 deletion as efficiently as the full-length transcript itself.

COMING SOON TO A KIT NEAR YOU: Although it’s not yet commercially available, Chang says dChIRP technology has been licensed to several companies. But anybody can use the technique, he says. “If you know the sequence of your RNA,” he says, “you can just punch it into the computer, order up a bunch of oligos, and you’re off to the races.” 