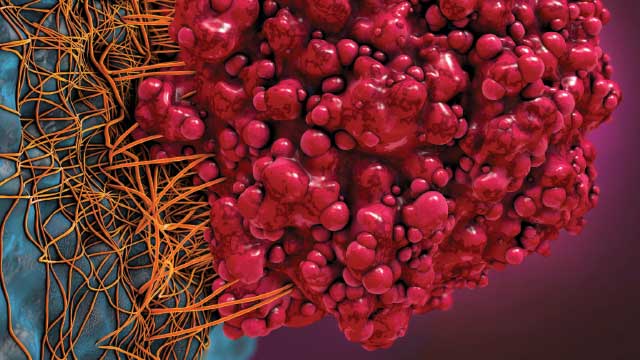 Although metastasis is responsible for 90 percent of cancer-related deaths, it’s one of the least-studied aspects of cancer—perhaps because it is one of the trickiest to investigate.

Metastases can be established in mice either by injecting cancer cells into organs or the bloodstream, or by using animals genetically engineered to spontaneously develop tumors that then metastasize on their own. Injected cells may come from mutated cell lines, spontaneously grown animal tumors, or cancerous human tissues.

“Each one’s profoundly different and all have potential value,” says John Condeelis, who studies metastasis at Albert Einstein College of Medicine in New York. Yet the frequency of metastases in many animal models is low, and each method used to model the metastatic process can only recapitulate some of the steps.

The frequency of metastases in many animal models is low, and each method used to model the metastatic process can...

The Scientist spoke to researchers confronting these challenges about how to choose a metastasis model and about new tools that are making it possible to study cancer’s spread in more detail than ever before.

Cell injection into the bloodstream or into an organ is the most common approach to modeling metastasis. Injected cells are useful for studying the effects of drugs on metastasis and the mechanisms that control how cells home. To avoid any bias in where cancer cells migrate, Sheila Singh, a cancer biologist at McMaster University in Ontario, injects malignant cells directly into the heart to give them access to the entire animal. However, most metastasis researchers agree that it’s best practice to match injected cells to the organ in which they would have formed a primary tumor and wait for the cells to migrate to a secondary site from there. For example, metastatic melanoma cell lines can be injected into a mouse’s subcutaneous skin layer and will subsequently migrate to the animal’s lungs. 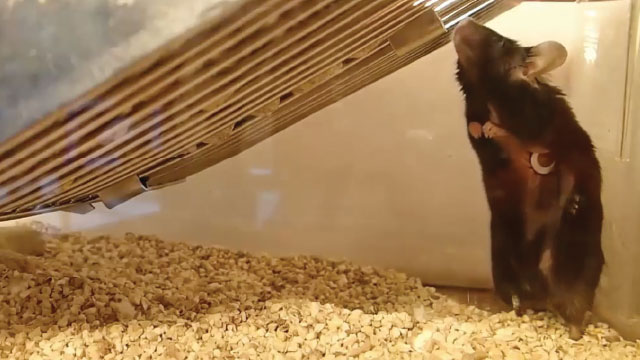 OPEN WINDOW: The technique developed by John Condeelis and his colleagues makes it possible to attach a permanent window to a mouse’s lung while allowing the animal to live out a normal life span.COURTESY OF DAVID ENTENBERG AND JOHN S. CONDEELIS

This approach can be hampered by the low frequency of metastatic events in mice. As few as 0.01 percent of cancer cells make it out of a primary tumor and seed a new one. But many commercially available cancer cell lines have already been enriched for the most highly metastatic cells through repeated injection into primary sites followed by harvesting from metastatic sites.

Both Condeelis and Singh caution that years or even decades of passaging cells in culture can introduce genetic changes and contamination that may alter the cells’ behavior or identity (see “The Great Big Clean-Up,” The Scientist, September 2015). One alternative to relying on commercial cell lines is creating new ones from primary animal or human tissues. “Those tumors tend to be more realistic,” says Condeelis. Singh’s group does this regularly, she says, but, “even then, our cells usually grow in culture for less than a year as opposed to ten or fifteen years.”

Singh prefers to use patient-derived tumor xenograft (PDTX) models, in which human cancer cells are injected into animals. The process requires IRB approval and biosafety training, but she says it’s worth the extra work because such experiments yield insight into characteristics specific to human metastatic cancer cells. “It’s almost as if we’re just using the mouse brain as an incubator for the tumor,” she says. “We think that [using] human cells brings us one step closer to translation.”

Singh’s group receives human tumor tissue from brain cancer biopsies, which each yield about 5 million–10 million cancer cells. To enrich for tumor-initiating cells, the researchers either select for stem cells capable of forming spheres in culture or select for cells expressing a marker of tumor initiation called CD133.

In a study published last year, Singh’s team injected human brain metastasis–initiating cells into mice and used RNA interference to identify two genes required for metastasis from the lung to the brain (Acta Neuropathologica, 134:923-40, 2017). They then examined tissue samples from primary lung tumors and found that one of the genes, SPOCK1, was only overexpressed in samples from patients whose lung cancer eventually spread to the brain, suggesting that the gene could be a biomarker for future metastasis.

PDTX recipient mice must be immuno-compromised so that they don’t reject patient cells. This limits the model’s usefulness for studying immunotherapy drugs that work through activating T cells. To get around this, Singh says, it’s possible to introduce matched human T cells along with tumor cells to initially test the efficacy of an immunotherapy drug, and then move into the more expensive humanized mouse models that have human immune systems.

For Condeelis, mice genetically altered to spontaneously develop tumors are the gold standard for studying the metastatic processes. These models offer insight into the earliest steps of metastasis, such as cancer cells’ dissociation from primary tumors and entrance into the vasculature, as well as the roles of the microenvironment and the immune system in promoting metastasis. For example, Condeelis’s team has described an important function of macrophages in escorting cancer cells to blood vessels and forming structures they call the tumor microenvironment of metastasis (Cancer Discovery, 5:932-43, 2015). The macrophages then release proteins that cause connections between blood vessel endothelial cells to loosen so that cancer cells can easily slip into the vasculature (see “Macrophages Play a Double Role in Cancer”).

Several commercially available, genetically induced mouse lines exist for each tissue type, some of which develop more-aggressive cancers than others. There can also be variation in which organs cancer cells travel to among mouse lines with the same type of primary tumor, so it’s important to choose a line that demonstrates metastasis to the organ of interest.

A downside of spontaneous models is that their tumors can kill an animal before they metastasize. This issue can be overcome by removing primary tumors once they reach 400-500 mm3, which can mimic situations where metastases appear after surgical resection. With or without surgery, the time for a tumor to metastasize can vary greatly; some animals may develop metastases in a week, while others may take a month. Ultimately, a combination of approaches may be needed to validate findings. “In the end, all of these models are complementary,” says Singh.

Imaging plays a major role in metastasis research, regardless of the models used. Whether tracking individual cells’ exits from primary tumors or measuring tumor volumes, choosing the right tools for the job is crucial. To get a broad view of metastases’ growth and spread, many researchers apply the same techniques used for cancer patients, including computed tomography (CT), magnetic resonance imaging (MRI), positron emission tomography (PET), or single-photon emission tomography. 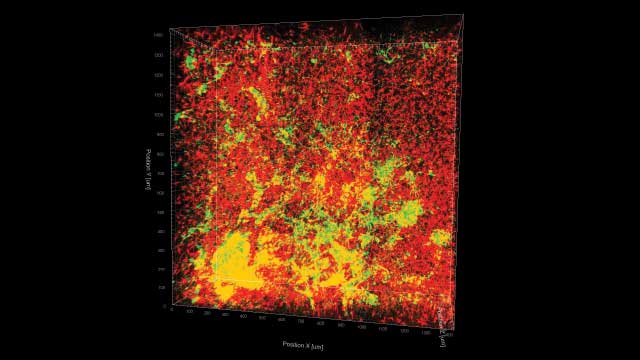 To count and analyze metastatic tumors in detail, says Siyuan Zhang, a tumor biologist at the University of Notre Dame in Indiana, many researchers harvest and section organs containing tumors. As a postdoc studying brain metastases, he found this method laborious and often inaccurate. For example, Zhang says, it’s possible to count one tumor with a highly branched structure as several individual tumors. Now Zhang employs tissue clearing techniques, including one called CLARITY, that render tissues see-through while leaving structures intact (Nature, 497:332-37, 2013). Currently, he says, penetrating whole organs with antibodies to label tumors is the rate-limiting step of the process and can take several weeks to complete. But the imaging is straightforward, requiring just a standard multiphoton microscope.

It really takes imaging analysis beyond the descriptive—beyond the ‘cool.’

Zhang’s biggest challenge is getting quantifiable information from three-dimensional imaging data. Teaming up with computational biologists, his lab recently developed a pipeline called spatial filtering-based background removal and multi-channel forest classifiers–based 3D reconstruction (SMART 3D) to quantify data from their whole-brain imaging experiments (Sci Rep, doi:10.1038/srep24201, 2016). Their algorithm, which is available on GitHub, segments foreground and background data, allowing researchers to resolve features of tumors that they can then quantify. For example, Zhang’s team labeled brains with a marker of cell proliferation and compared features of highly proliferative metastatic tumors to those that were not actively growing. The scientists found that proliferation rates did not correlate with tumor size, and are now testing whether tumor proliferation is affected by environmental variables such as proximity to blood vessels. “It really takes imaging analysis beyond the descriptive—beyond the ‘cool,’” says Zhang.

Fixed-tissue studies can only provide a snapshot of what’s happening at one point in time. When studying the small-scale events of metastasis, such as cancer cell migration into and out of the vasculature, Condeelis says, “there’s a real risk of making sweeping conclusions” based on endpoints alone. His team has developed techniques to image and track cancer cells in mammary tissue, abdominal organs, and brains of living mice, in real time. To study metastatic spread of breast cancer, they have now taken on one of the biggest challenges in live animal imaging—the lungs.

There are several obstacles to imaging lungs in live mice, “not least of which is the extraordinary mechanical movement of the lungs,” says Condeelis. Mice take 120 breaths per minute, driving corresponding changes in lung shape and volume. To deal with this, researchers usually perform a terminal surgery that involves making a hole in an animal’s rib cage and using a vacuum to hold the lung against a clear window. After imaging, the animal must be sacrificed, meaning each stage of metastasis must be imaged in a different animal.

Along with a team of engineers and surgeons, Condeelis’s group recently developed a method to attach a permanent window to the lung tissue using a surgical adhesive. The window’s rim attaches to the intact rib cage, but the rest of it moves as the lung moves. After the surgery, mice live comfortably for a normal lifespan. “In that single animal, you can put together a metastasis progression map,” says Condeelis.

One of the first things Condeelis’s team saw using this model was that when tumor cells arrive in the lungs, they immediately form a tumor microenvironment of metastasis structures, which the team had previously only seen in blood vessels surrounding primary tumors. This suggests that even before the metastatic tumor has grown to a clinically detectable size, it starts to spread.

Condeelis’s group has trained a handful of postdocs and surgeons so far in the lung window procedure—an educational process that can take up to three months. He hopes to license the technique to a microscopy vendor that could offer training to customers so that the method could become more widespread. Live animal imaging, he says, can help resolve some of the outstanding questions in metastasis biology.