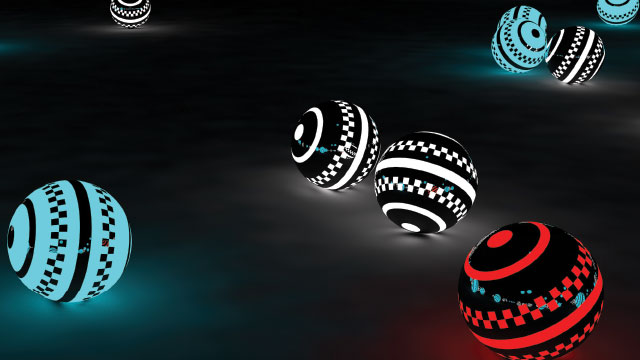 The more biologists learn about disease complexity and the power of personalized treatments, the more important it becomes to develop noninvasive and unbiased methods of sorting, separating, and otherwise gathering information about individual cells.

Traditionally, however, sorting cells has been tricky. Methods for accurately and quickly sorting heterogeneous cell populations—even into just the broad categories of malignant or benign—often rely on the use of fluorescent surface labels or biochemical stains, techniques that frequently alter the cells’ properties. And in some applications, researchers simply don’t know which surface markers to track. This means that the cells being studied may not be representative of the specific cell subpopulation of interest.

A new wave of label-free methods is offering researchers ways to identify subgroups of cells in live cultures and to home in on the most pertinent populations. Still, many label-free methods rely on only one cell characteristic or are...

The Scientist explores how these label-free techniques are helping to rapidly and accurately identify and isolate subsets of cells from a larger population.

Motivation: Goldys wanted to develop a noninvasive, label-free method for distinguishing between healthy and diseased cells that can be used for medical diagnostics. Inspired by developments in remote sensing for assessing minerals based on soil color, she set out to look for subtle differences in the color of cells. This led her to a novel image-analysis technique that is based on deconstructing the fluorescence patterns intrinsic to a cell sample. 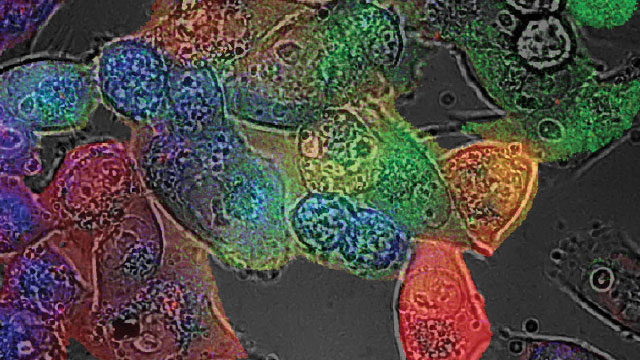 Approach: Many cellular components vital to metabolism are autofluorescent. Goldys looks for subtle differences in the fluorescent signals to distinguish healthy from diseased cells. “I can tell whether my daughter is healthy by the color of her face; there’s equally as much biological information contained in color differences at the cellular level,” she says. Goldys modified a common, wide-field fluorescence microscope by installing 35 spectral channels, chosen to excite the fluorophores in selected wavelength ranges. Repeated snapshots of the same cell sample taken in all the channels generate 35-dimensional vectors, each corresponding to an image pixel. Each image captures a different part of the cell sample and comprises millions of pixels. Then, she uses custom-made software to identify subtle differences in color from a baseline level. Different patterns of color pinpoint the diseased cells in a population, which can then be isolated for further study (Sci Rep, 6:23453, 2016).

Tips: Goldys advises researchers to carefully characterize their control cells, typically healthy or normal cells. Variation from this baseline helps to identify diseased cells. Setting up the microscope and adding channels is straightforward. 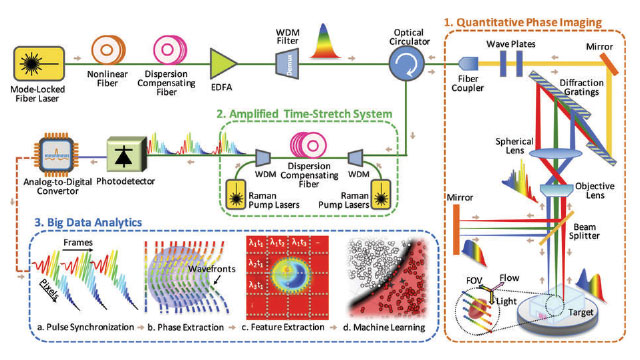 CLEAR AND LABEL-FREE: In time-stretch quantitative phase imaging, laser light is amplified and filtered to generate a spectrum of optical pulses. In Box 1, the flashes of light illuminate and encode spatial features of the cell sample. In Box 2, spatial information is converted to digital. In Box 3, image-processing and machine-learning tools group the cells according to the features that were detected.SCI REP, 6:21471, 2016

Motivation: Label-free cell assays often rely only on identifying a single feature. Their use is also generally limited to small sample sizes due to their low throughput. Jalali’s team developed a machine learning–augmented microscopy technique to rapidly identify multiple biophysical features simultaneously and accurately classify cells in a large population.

Approach: “Imagine that you’re illuminating a barcode with a line of light with different colors, as in a rainbow. By measuring the colors that are reflected, we can reconstruct the image of the barcode,” explains Mahjoubfar. In this case, the barcode target consists of cells pumped at high speed through a tiny microfluidic channel etched into a polymer substrate, where the cells are illuminated by an infrared laser flashed on and off 36 million times per second. The researchers then use a technology they developed, called time-stretch microscopy (which slows down input signals to allow conversion to digital), to measure the spectrum reflected by these individual laser pulses, picking up information about biophysical features such as cellular morphology and opacity. The ultrafast spectroscopy effectively freezes the motion of the cells passing at high speed (100,000 cells/s) in the flow, thereby achieving blur-free imaging of cells’ spacial features (Nat Photonics, 11:341-51, 2017). These biophysical features are used in a machine-learning algorithm to classify the cells with high accuracy (Sci Rep, 6:21471, 2016).

Functionality: The UCLA team can distinguish immune cells in the blood from circulating tumor cells that are associated with colon cancer, a step that could lead to earlier diagnosis of metastasis. They’ve also grouped algal cell strains according to their lipid content—“think of them as fatty algae,” says Jalali—an efficient source of biofuel.

Tips: Experience in optics and microfluidics is required to reconstruct the imaging system. Constructing the system includes fabricating tiny channels that keep the cells aligned and close to the surface of the mirror. Another challenge is getting the classification algorithm to run in real time as images are collected.

Future Plans: Jalali’s team is continuing to develop and refine the artificial intelligence aspect of their time-stretch microscope, with the aim of improving accuracy and computational efficiency of cancer cell classification.

Motivation: A highly focused laser beam can separate single cells of a specific type from a mixed population. But it’s difficult to integrate these so-called optical tweezers with the high-throughput need of cell-sorting applications. “The laser has to be aligned perfectly” with the particles of interest, says Yanik, which is difficult when it is focused through a conventional objective lens some distance from a stream of flowing cells. He solved this problem by developing a planar lens that can focus white light to generate an optical force throughout a microfluidic channel. This force is strong enough to immobilize bioparticles belonging to a cell subset of interest as they move through the channel. 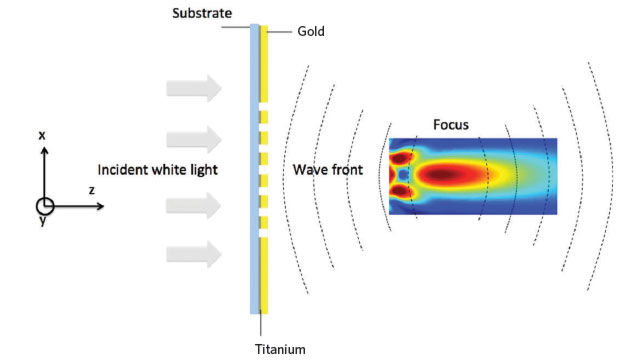 MAY THE FORCE BE WITH YOU: White light is focused to microscopic dimensions through the tiny holes of a planar optical lens. Using this approach, metal lenses approximately 100 nm thick with a footprint comparable in size to a blood cell can be created on transparent substrates.OSA TECHNICAL DIGEST, doi.org/10.1364/FIO.2015.JTu4A.1, 2015

Approach: The planar lens comprises tiny (5 microns/side) arrays of round subwavelength holes in a thin metal film that forms one side of a microfluidic chip. Light from a standard halogen source is transmitted through these specially engineered holes, which together act as a nanolens. Their arrangement on the film focuses the light as it emerges, thus delivering a well-controlled beam throughout the chip. When the cells are pumped through the channel, the optical force of this beam is countered by the drag force of the flow, thus separating particles with varying size and refractive indices. The balance between optical and fluidic forces can be adjusted via light intensity to selectively sort particles.

Functionality: Yanik has used this technique to isolate bacterial cells of genetically similar species with subtle differences in protein structure, and to separate rare circulating tumor cells (CTCs) from white blood cells based on size. He warns that “you’ll still need a conventional [fluorescent or antibody label] marking scheme to identify the specific type of CTCs (OSA Technical Digest, doi.org/10.1364/FIO.2015.JTu4A.1, 2015).

Tips: “Any nanophotonic engineer could make this chip,” says Yanik. He notes, though, that the flow channel can clog up with cells that have been trapped by the beam. He advises setting up another cross-channel flow to periodically wash away trapped cells. Also, diluting a blood sample to 25 percent can make it easier to separate particles.

Future Plans: Yanik is using nanohole lenses to develop point-of-care infection monitoring tools that can detect rare biomarkers in small concentrations. In particular, he wants to identify a circulating glycoprotein shed from infectious bacteria using a blood sample taken by a finger prick.

Approach: Paterson uses ultrafast laser inscription followed by selective chemical etching to “write” 3-D channels into fused silica devices. In the same piece of glass, she uses the same ultrafast laser to etch the waveguides. Cells are deflected based on size as they flow past the light emitted from the waveguide and are collected into separate outlet channels. Further imaging is required to identify the deflected cells.

Functionality: Paterson has used 3-D microfluidic devices to separate large mammalian cells from a population of small bacterial cells. But blood cytometry is the holy grail, she says. “Everyone wants to do it faster and cheaper at point of care.” Most recently, her team separated 5- and 10-micron synthetic spheres—approximately the size of blood cells—in a 3-D microfluidic structure (OSA Technical Digest, doi.org/10.1364/OTA.2017.OtW2E.3, 2017).

Advantages: The 3-D system allows higher throughput, while exposing the cell to a less-intense beam than, say, the focused infrared beam of optical tweezers. It also opens the possibility of multiple sorting units within the same device: one channel separates one size of cell, while the remainder are passed to a second channel for sorting of another size, and so on.

Future Plans: The next step is to improve the resolution to allow more-refined size discrimination by optimizing laser and channel parameters. This will increase the utility of the technique in other applications of blood cytometry.