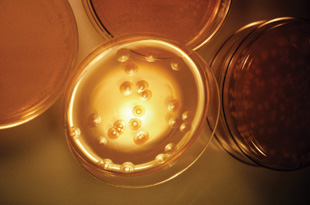 © DR. MICHAEL GABRIDGE/VISUALS UNLIMITED/CORBISMycoplasma are everywhere. Members of this genus of bacteria are the smallest free-living organisms able to self-replicate. In the 1950s, when mycoplasma were first isolated from cell cultures, contamination was found in 57–92 percent of lab-grown cells. Because the organisms lack a cell wall, they are resistant to common antibiotics, such as streptomycin and penicillin, and they easily slip through filters.

Even though scientists are now more aware of mycoplasma as possible contaminants, it is estimated that as much as 35 percent of the cell cultures currently used in research may be infected. It remains a common problem—especially in university labs, where trainees come and go, and cell lines freely change hands—partly because the bacteria are impossible to see using conventional microscopy. They also produce indirect, subtle effects on eukaryotic cells.

For those not lucky enough to stumble on their own solution to a mycoplasma problem, The Scientist talked to experts about ways to prevent, detect, and treat the contamination.

Quarantine and test new cell lines. Unless they are from a reputable cell bank, new cell lines and any thawed cells should be isolated for at least two weeks and tested for mycoplasma before they are incorporated into daily lab work. Many facilities don’t have a separate incubator in which to quarantine cells. If that’s the case for your lab, keep the culture flasks on a different side or shelf of the same incubator, says Debora Esposito, director of the cell-culture core facility at the Plants for Human Health Institute at North Carolina State University in Kannapolis. She keeps trainees’ cells in a separate incubator in a different room.

Don’t speak. Because people’s mouths host some of the major mycoplasma contaminants, such as M. orale, M. fermentans, and M. hominis, you should not talk, whistle, or sing at the clean bench. “Cell culture is a place to go and do the experiment,” Esposito says. “If you need to discuss data or to plan the experiment, go outside of the cell-culture facility. That really helps to avoid contamination in general, not just mycoplasma.”

Check overlooked sources of contamination. Water baths, liquid nitrogen, and reagents, such as animal and plant-based serums, as well as feeder cells, can harbor mycoplasma. These should all be considered potential culprits when testing and troubleshooting cultures. Mycoplasma can even survive in a dried state on the inside of pipettes—so designate a set for clean cell lines, says Barbara Potts, a consultant who advises biopharmaceutical companies on control of mycoplasma and other contaminants. In addition, even though mycoplasma range from 0.1–0.5 μm in size, “0.1 μm filtration does not get you out of trouble,” she adds. They can shape-shift and readily pass through filter pores.

Train and keep each other accountable. Many research institutions offer periodic hands-on or online training. But on a daily basis, the larger the lab and the more people who have trained or worked in different places coming and going, the greater the chance for a slipup in best practices. Esposito hands out a standard operating protocol to people in her facility and has them sign it. She also recommends keeping a whiteboard in the cell-culture room for lab members to use to note bad practices they’ve witnessed. This also helps avoid confrontations among personnel. Every two weeks, her staff has a lab meeting to discuss ways to avoid problems.

Make testing part of your routine. Besides good cell-culture technique, regular testing is one way to prevent major contaminations. Exactly how often you should test depends on whom you ask; the answer ranges from every 2 weeks to every 3 months. But there’s also no right answer. It depends on how large your lab is (facilities maintaining multiple cell lines are at greater risk of cross-contamination), how long you keep your cells, how precious your cells are, and how you intend to use them, says Jill Mariano, vice president of Bionique Testing Laboratories in Saranac Lake, New York.

Examine your cells often. Mycoplasma can kill your cultures, but more often it cohabits with the cells, rising to high titers before it produces noticeable effects. For example, the bacteria can interfere with cell migration, signal transduction, lymphocyte activation, and cytokine expression. Mycoplasma contamination can alter an endless number of parameters in unpredictable ways, says Hans Drexler of DSMZ, the German Collection of Microorganisms and Cell Cultures, in Braunschweig, Germany. If you get to know your cells like you would your pets or your children, you’ll know when something’s wrong and when you might consider additional testing, he adds.

Pick a PCR method or kit. Researchers often opt for polymerase chain reaction to detect one or more species of the most commonly occurring mycoplasma because the method is generally more sensitive and faster than culture-based approaches. If you’re already equipped to do PCR, then it makes sense. Here, the choice of primers—which tend to target a region of ribosomal RNA that’s conserved across many mycoplasma species—and the right controls are crucial, says Drexler. He and collaborator Cord Uphoff have published their latest protocol, which takes 2–3 hours (Methods Mol Biol, 946:1-13, 2013). Uphoff says that the DSMZ will provide the necessary positive and internal controls free of charge (www.cell-lines.de).

In general, you should perform PCR using purified DNA as opposed to crude lysates. This extra step prevents unknown substances from interfering with the Taq polymerase used in PCR, says Tatiana Flávia Pinheiro de Oliveira, who used an established phenol-chloroform extraction method for a recent study in Biologicals (Sep 23, 2013, DOI: 10.1016/j.biologicals.2013.08.005).
Commercial kits are also available to help simplify PCR. (See table below for examples of kits for sale.)

Consider testing using other methods, or a combination of methods. For those unfamiliar with PCR, a culture-based method might be preferable. For example, Tannous’s do-it-yourself bioluminescence assay, which costs a few cents per sample, could serve as a cheap screen, but a second method, such as PCR, should be used to confirm mycoplasma-positive samples, he notes. InvivoGen’s PlasmoTest assay—an engineered cell line whose media changes color in the presence of mycoplasma—costs less than $2/sample. With a minimum detection level of 150 colony-forming units per mL, it is less sensitive than PCR, but it doesn’t require any special skills or interpretation, says Scott Vara, a sales and technical support manager at InvivoGen.

If you already have a microscope and expertise in detecting mycoplasma, you might consider a fluorescence-based approach that adds fluorescent tags to mycoplasma DNA—such as Life Technologies’ MycoFluor ($217 USD per kit; enough for testing 100 2-mL samples). Michael Brewer, director and head of pharma analytics at the company, notes that MycoFluor’s sensitivity varies based on the type of cells you’re testing, the amount of cell debris, and the species of mycoplasma present. Bionique’s fluorescence approach is another option for researchers who don’t have the expertise to distinguish contaminated cell lines. Users incubate and fix cell-culture samples on prepared slides in the CELLshipper M-100 ($220 for 4 individual kits; each can test 1 cell culture) and send it back to the company for processing and interpretation.

Get a higher level of assurance if you need it. Increasingly, academic labs are getting involved in the early-stage development of cell-based therapies. Such labs should strongly consider sending samples to a laboratory that complies with the relevant regulatory guidance, such as Bionique or MicroSafe in The Netherlands, says Potts.

Decide whether to treat or purge your cultures. Weigh the value of your cells against the time and cost associated with treating them. In best-case scenarios, treatment with antibiotics takes two weeks. Before reintroduction into the lab, cells should be incubated for another two weeks and retested. Cases of severe contamination can take several months to treat. What’s more, even cells that have been cured might be compromised somehow, says Brewer.

Save a backup. Before you start treatment, store an aliquot of mycoplasma-positive cells in the freezer. You’ll need them if your first attempt at treatment doesn’t work or kills the cells, Drexler says.

Try antibiotic treatments in parallel. InvivoGen’s Plasmocin is a popular, commercially available antibiotic treatment that targets DNA replication and protein synthesis. In an independent study conducted by Drexler’s group, it cured 49 of 58 contaminated cell lines. In the remaining cases, the researchers used a frozen backup of the positive cells and successfully treated them with Baytril, BM-Cyclin, Ciprobay, MRA, or MycoZap (J Biomed Biotechnol, 2012:267678, 2012). Drexler and Uphoff’s DIY treatment strategy is also available (Methods Mol Biol, 946:15-26, 2013). For those using Plasmocin and not seeing results, InvivoGen recommends increasing the dose by 50 percent or adding a couple of weeks to the treatment time. “Because mycoplasma grow so slowly, hitting them with a high dose is not going to make as much of a difference as just extending the treatment,” says Vara.

Use antibiotics sparingly and judiciously. With the expense of testing, and the value of your cells, you may wonder whether you should treat them before a problem arises. Some researchers use prophylactic antibiotic treatment, but if you can avoid it, you absolutely should, says Mariano. It can cause antibiotic resistance, “but more importantly, you can really mask an underlying low level of contamination that can persist.” That makes it harder to troubleshoot your aseptic techniques and materials. 