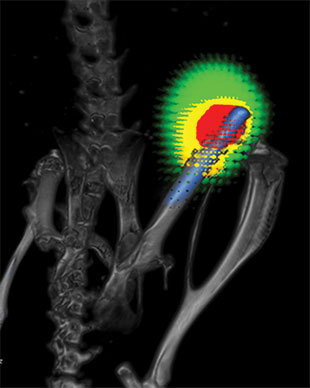 INFECTED IMPLANT: In vivo optical imaging of a titanium bone implant (blue) in a mouse femur combines bioluminescence, fluorescence, and CT imaging. The yellow areas show colocalization of an injected strain of bioluminescent Staphylococcus aureus (red) and fluorescently labeled neutrophils (green), early immune responders to infections. COURTESY OF LLOYD MILLER, MD, PHDEpidemiologists are sleuths who track infections—what causes them and how they spread through a geographical area over time. Another kind of infection sleuth wants to know whether or how infections spread within the living body—as in the case of medical implants that get infected, or tuberculosis that moves from the lungs to other tissues—and whether infection hot spots will succumb to immune-system attack or to drugs over time.

Used most often in mice and other small rodents, in vivo optical imaging “is one really powerful tool to noninvasively monitor infection over time,” says Lloyd Miller, an associate...

The method is powered by new refinements in fluorescent probes and in bioluminescently labeled pathogens. And a number of instruments now allow researchers to merge light-based imaging with other imaging modalities, such as CT scans. With these tools, infectious-disease researchers can probe deeper into the bodies of small animals, examining the effects of pathogens on their hearts and lungs.

In vivo optical imaging also comes with the major advantage of cutting down on animal use. Researchers who typically euthanize animals at various time points to measure the growth of infection in colony-forming units or to watch the body’s unfolding response to it can now keep the animals alive and track infections at multiple points in time.

The Scientist talked to expert users and core-facility directors about whether and how to add in vivo optical bioluminescence or fluorescence imaging to your arsenal. Here’s what they told us.

HEAD TO YOUR CORE
If the imaging core facility at your institution has an in vivo optical imager, that should be your first stop. An initial consultation will determine whether your biology agrees with the capabilities of the equipment, says Kelly Stefano Cole, associate director of the Regional Biocontainment Laboratory, a biosafety level 3 (BSL3) facility at the University of Pittsburgh’s Center for Vaccine Research. The more specifics you can offer—what you hope to measure, how often, and for how long—the easier it will be for them to help you.

Studying infectious diseases, of course, requires the right level of biosafety. With optical imaging, each core facility does it differently: some have equipment dedicated to a specific pathogen, whereas others are using the same machine to monitor a variety of animal models and pathogens. You may have to place your infected animal in a customized chamber that you can then use within the machines. These boxes help minimize the risk of pathogen spreading, but they also cut back on the sensitivity of the imagers, Cole says.

Cores offer a range of services, from training the investigator to work on his or her own to assisting with running the equipment, and even in some cases doing the experiments. The higher the biosafety level you’re working in, the longer it may take to clean the equipment before and after use. This translates into a higher cost; it is typically around 20 percent higher to use a BSL3 core compared to a BSL2, Cole says. “When you move up the scale to a BSL3, you just need to recognize that things get more complicated and expensive. As long as people understand that going into it, they’re okay,” she adds.

MACHINERY
In vivo optical-imaging machines are about the size of a dorm refrigerator—boxes equipped with a laser light and lens, a sensitive camera, and a platform on which you place an anesthetized mouse or other small rodent. The machines take up to several minutes to acquire the light emitted from the animal.

Although 3-D systems are on the market, you’re more likely to find a 2-D system at a core facility. Over the past few years, PerkinElmer bought up many of the smaller in vivo optical-imaging vendors, and the company now sells two different lines of IVIS (in vivo imaging systems): the IVIS Lumina Series III (consisting of four models, for 2-D imaging) and the more sensitive IVIS Spectrum Series (three models, for 2-D and 3-D imaging). The instruments range in price from around $100K–$550K.

The 2-D imagers within these two series are popular for rapid, high-throughput screening of animals, especially for drug-efficacy studies, says PerkinElmer’s Kevin Francis, whose development of bioluminescently labeled bacteria helped lay the groundwork for in vivo infectious-disease imaging. “If you have a [bioluminescently labeled] infectious disease that you’re treating with an antibiotic, you can see whether or not you’re efficiently killing that particular disease because the light goes out,” he says.

Some of the more sophisticated IVIS models incorporate X-ray or CT scanning, which allows you to do 2-D or 3-D coregistration, lining up your molecular image with an anatomical one. The machines that do 3-D optical imaging, including 3-D bioluminescent and fluorescence tomography, allow you to more precisely locate the signal spatially, and to build images that you can rotate.

But newcomers should realize that in vivo optical imaging is “more than just a pretty picture,” says Matthias Nahrendorf of Massachusetts General Hospital’s Center for Systems Biology. There’s a real art to setting up these studies, which require at least five or six animals for each variable (infection or treatment) that’s being assessed. And, though the imaging method is not to the level of measuring single cells, it is semiquantitative and will allow you to measure the area of a region of interest over time. 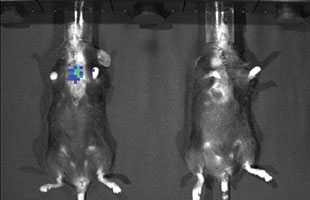 GETTING TO THE HEART OF THE MATTER: This in vivo optical image shows a mouse infected with a bioluminescent strain of Staphylococcus aureus in the inner lining of the animal’s heart (left). The control mouse is on the right.COURTESY OF YE AND NAHRENDORFIn most cases, you label your infectious agent before introducing it into the animal. One decision you’ll make at the outset is whether to work with bioluminescent or fluorescent labels; each comes with its own advantages.

Bioluminescence works by harnessing the natural ability of some organisms, such as fireflies, jellyfish, or bacteria, to glow. The enzyme luciferase from these creatures can be engineered into a variety of bacteria and other pathogens for infectious-disease research. In weighing the pros and cons of bioluminescence versus fluorescence, bioluminescence sometimes wins out because of its higher sensitivity and better light penetration (low background), Nahrendorf says. His group uses bioluminescence to track stem cells or bacterial infections in mice, and the team can easily see both in the heart. (See photograph on right.)

Bacterial luciferase is especially popular for generating bioluminescent pathogens, and a variety of these pathogens are commercially available. There are also luciferases that allow you to monitor more-dynamic processes, such as calcium release, in a tissue. “There are a lot of tools now available,” for sale and from other researchers who might be willing to share, Francis says. “With academics especially, rather than reengineering everything yourself, it would be better to do a collaboration and get these pathogens in-house to do the studies with.”

OPTING FOR FLUORESCENCE
People pick fluorescence over bioluminescence for the former’s ability to merge well with other methods, such as microscopy or flow cytometry, after you’ve harvested tissues from the animals, or in a parallel line of experiments.

Bacteria transfected with fluorescent proteins are not as bright as bioluminescent bacteria—and so are probably not sensitive enough to be detected using whole-animal in vivo optical imaging, Miller says. Researchers instead use transgenic mice whose host cells or proteins are fluorescently tagged. Or they can inject targeted fluorescent probes that are conjugated to quantum dots, nanoparticles, or dyes to visualize aspects of the host’s immune response. Because the latter strategy doesn’t require genetic engineering, fluorescence studies also have greater potential for clinical translation.

Fluorescence is better for multiplexing, too. Measuring multiple signals using bioluminescence is more challenging because there are many fewer reporter systems available with nonoverlapping substrate and emission spectra, and signals may take several hours to decay, says Jason Lee, director of the Preclinical Imaging Technology Center, Crump Institute for Molecular Imaging at the University of California, Los Angeles.

Traditional fluorescent reporters, such as green fluorescent protein (GFP), are severely limited in their ability to be detected deep within tissue, however. To help solve this problem, researchers have devised near-infrared fluorescent proteins for in vivo imaging. The DNA constructs for these are available via Addgene for $65 per plasmid.

Even with these improvements, single-cell detection, especially at depths of greater than several millimeters, is not possible using near-infrared probes, says Vladislav Verkhusha of the Albert Einstein College of Medicine, who has developed a variety of fluorescent proteins for in vivo imaging. As with any of these optical imaging methods, especially the 2-D version, you will need to validate that the signal is coming from the expected tissue by dissecting and imaging individual tissues. 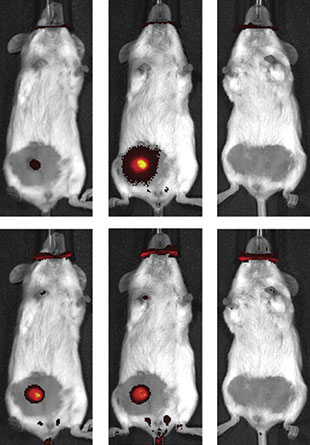 NEWER PROBES: Researchers continue to generate new fluorescent probes that can report on protein interactions and modifications in deep tissues of whole animals. In the example shown here, a near-infrared reporter iSplit, developed by Vladislav Verkhusha and colleagues, homes in on a specific protein-protein interaction. The top row shows near-infrared fluorescence of iSplit before (left) and after (center) the protein-protein interaction in a mouse tumor model and a control mouse (right). The bottom row shows far-red fluorescence of another probe used in addition to iSplit to gauge tumor size.COURTESY OF VLADISLAV VERKHUSHA, CHEMISTRY & BIOLOGY, 20: 1078–86, 2013If you want to use mice for your imaging experiments, you’re in luck. Although some in vivo optical-imaging instruments can, in theory, handle larger mammals such as ferrets, they can’t see as deeply within these larger animals. And with mice, you can screen more than one animal at a time. Some instruments, such as the Spectrum series, routinely screen five mice, and allow you to screen as many as 10 with the right peripherals, says Francis.

Creating a chronic infectious-disease model can be a bit tricky. It involves striking a balance between injecting the mouse with enough of a pathogen to cause disease that’s detectable using the imagers, on the one hand, and on the other, keeping the animal alive for long enough to take images over time. “Imaging is an additional stress [for the animal] because you have to put it under anesthesia with isoflurane. That actually can put some strain on the mouse. You also have to make sure the mouse doesn’t get cold,” Nahrendorf says.

Says Francis, “Normally the rule of thumb is, if the pathogen is causing disease you should be able to visualize it anywhere in a mouse or a rat. But if you want to use an artificial model where you’ve got low numbers of colony-forming units, then often you’re scavenging for the signal,” meaning your scans may take longer.

Many researchers are working out ways to image larger animals. Using near-infrared fluorescent probes with photoacoustic imaging (see “Brainspotting,” December 2011) is one method that Verkhusha, Miller, and others say they are excited about for the technique’s ability to image at greater depth than purely in vivo fluorescent methods. In photoacoustic imaging, light shined into the animal causes a subtle vibration of fluorochromes that is then picked up using ultrasound. The instruments, sold by VisualSonics and Endra Life Sciences, start at about $250,000.


Correction (January 13): The original version of this article erroneously described ferrets as rodents. They are, in fact, carnivores. The Scientist regrets the error.