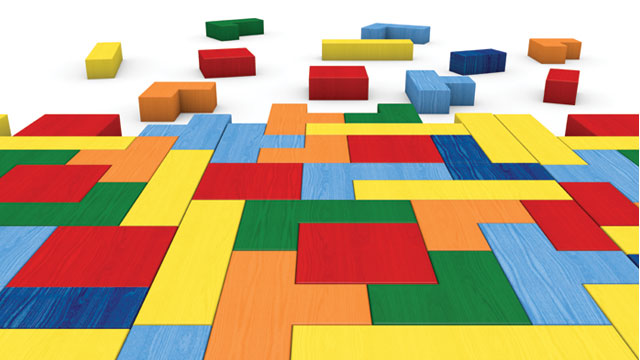 In search of better drugs and therapies, researchers are constantly looking for new ways to identify compounds that selectively block disease pathways. Industrial labs have relied on high-throughput screening to finger promising new molecules, but most academic labs lack the equipment and resources to scan many thousands, even millions, of compounds. For a long while this shut academic labs out of such searches, but a related technique, fragment-based drug discovery (also called fragment-based lead discovery), offers another way to develop small-molecule drugs and chemical probes for investigating biological processes. And this approach relies on instruments and expertise available at many academic institutions.

In any type of screening-based drug-discovery program, researchers examine a library of molecules that represent the gamut of chemical shapes and functional groups that could occupy a target’s binding site. Full-size drug molecules, which typically have a molecular weight (MW) of approximately 500, comprise a...

But starting with fragments half that size produces smaller structures with a smaller range of chemical variability. That means a library of fewer compounds can be used to screen a large swath of these chemical combinations. Because smaller molecules have less surface area for binding, they will bind more weakly to a desired target. However, once researchers have an idea of which of these small molecules bind to the target, they can then combine molecules that bind to different parts of the target or develop larger, more complex structures based on the initial screening hits.

Researchers have been employing this strategy for more than 15 years, and the approach has generated more than a dozen molecules that are in clinical testing. Chemical and structural biologists who aren’t specifically interested in developing drugs can also use fragment-based screening to create compounds that serve as tools to probe the function of cellular systems. To use this technique in your laboratory, you’ll need access to a team with a diverse set of skills: structural biology, organic synthesis and medicinal chemistry, biophysical assays, and even chemical informatics and molecular modeling. Here’s a guide to the basic steps.

Step 1: Identify the target and library 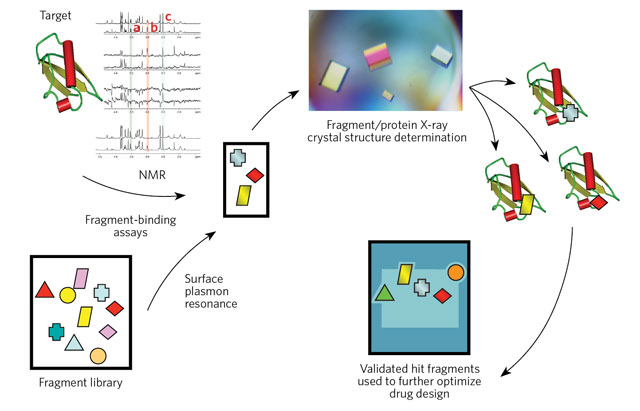 STEP BY STEP: This plan illustrates one set of steps by which researchers can screen for fragments that bind to a protein target of interest. They might first use NMR or surface plasmon resonance to screen and then X-ray crystallography to determine the structure of the fragment-protein complex. Based on this information, they can then design larger, more potent molecules.COURTESY OF RODERICK HUBBARD, J. SYNCHROTRON RAD, 15:227–230, 2008First you’ll need to choose the protein target that you’d like to study. The best choice for most academic researchers will be one whose structure is known from X-ray crystallography or can be solved using nuclear magnetic resonance (NMR) spectroscopy, says Roderick Hubbard, a professor of chemistry at the University of York and a researcher at the pharmaceutical company Vernalis (www.vernalis.com), both in the U.K. At the cutting edge of this field, some researchers are trying this technique on targets for which structural data is limited. However, the ability to crystallize or solve an NMR structure of your protein once fragments are bound to it makes it far easier to understand how those molecules bind to a target of interest and to begin to develop those fragments into larger molecules.

Next, you need to assemble a library of small molecules, typically MW 250 or smaller, that you’ll use to screen for activity against your target. A variety of companies (Maybridge, ChemBridge, Asinex, and others) sell molecule collections that you can test for activity, so you don’t have to synthesize your initial molecules from scratch. You might have to mix and match, however, says Martin Drysdale, a drug discovery researcher at the Beatson Institute in Glasgow, Scotland. “It’s very convenient to go buy your library from a single provider, but you’re unlikely to get the best fragment library that way,” he says. To create a better library, you can analyze the chemical diversity of fragments from the commercial libraries and assemble a custom library from the best ones, he says. Even a few hundred compounds can lead to initial screening hits, says Daniel Erlanson, president of Carmot Therapeutics (carmot.us) in San Francisco, though using at least 1,000 compounds is typical. Companies that focus on fragment screening use libraries that include approximately 1,500 compounds to choose from.

Even if you’re not synthesizing any of the initial fragment molecules that you’d like to test, it’s important to consult with chemists on your team at this very early stage. Chemists can steer you toward molecules that will be easier to develop into larger structures later in the process. They can also help you assess which molecules might cause problems.

For example, it’s easy for solubility issues, reactive fragments, aggregation, or off-site binding to complicate screening, says Erlanson. In addition to carefully selecting your library compounds, you’ll want to make sure they don’t include low-level impurities. Aggregation is a relatively easy problem to solve, Erlanson explains: just add a small amount of nonionic detergent to your assays. Tougher to deal with are so-called PAINS, or pan-assay interference compounds, which bind indiscriminately to a variety of targets. If you’re not a chemist, Erlanson advises, run your hit structures by one to look for these potential problems. (For more information, see Bioorg Med Chem Lett, 23:2844-52, 2013, and Top Curr Chem, 317:1-32, 2012).

Chemists are also working to expand the diversity of fragment libraries. Many of the compounds in commercial libraries are flat, but researchers would like to assemble molecular structures with greater three-dimensional character and chirality (i.e., one that has a nonsuperposable mirror image, such as right and left hands). These types of structures would more closely resemble natural products, says Yikai Wang, a postdoctoral researcher in the lab of chemist Damian Young at the Broad Institute in Cambridge, Massachusetts. The approach that Wang and his colleagues are using is called diversity-oriented synthesis. Unlike traditional organic synthesis, where the goal is to construct a specific natural-product molecule, researchers create diversity within the core of the molecule, add chiral centers, and append a variety of functional groups to expand their libraries.

Because these smaller molecules have a relatively low affinity for the target (binding in the low mM or mid-µM range), you’ll need to use a biophysical screening method that can detect this weak binding. Popular choices include NMR spectroscopy, surface plasmon resonance (SPR), and thermal-shift assays. Making this decision may depend on the instruments and expertise that are available at your institution.

The original technique for assaying fragment binding used NMR spectroscopy to detect changes in proteins as they bind to a fragment. Drug-discovery researchers have long used structure/activity relationships (SAR) to guide the design of new drugs. As fragment-based screening came on the scene, researchers developed a technique known as SAR by NMR. SPR, which monitors binding by following polarization changes as a solution containing the fragment flows over an immobilized target protein, is another option, but only if your institute has an SPR instrument such as a Biacore (www.biacore.com), and if a member of your laboratory has experience using it. Other choices include X-ray crystallography, isothermal titration calorimetry, and enzyme assays. (See “SPRead Your Antibody Capabilities,” The Scientist, May 2012.)

Some researchers have successfully screened libraries using thermal-shift assays, which measure the change in the thermal stability of proteins upon fragment binding. These assays are relatively easy to carry out in most biochemistry labs, but experts disagree on whether they’re a good choice for fragment-based screening. With targets that have well-defined binding pockets, this technique can lead to reasonable hits, says Drysdale. But it may not give reliable results for targets with shallow binding pockets.

With experience, a thermal-shift screen of the library against your target might take 2 days, an SPR screen 1–2 weeks, and NMR 2–4 weeks, Hubbard says.

Step 3: Validate with a different technique(s) 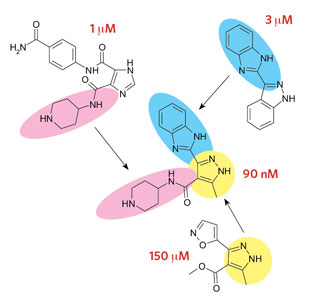 DESIGNING A BETTER DRUG: The combination of chemical groups from three different fragments that bind weakly to an enzyme produce a potent new enzyme inhibitor (center) that binds in the nM range.COURTESY OF RODERICK HUBBARD“It’s easy to do a fragment screen,” says Drysdale. “What’s harder is to properly and adequately validate your hits.” If you started with SPR, consider validating with NMR, for example. Conducting X-ray crystallography of your hit compounds bound to your target could also add to your understanding of compound binding. (See illustration below.)

The compound with the tightest binding constant isn’t always the best hit. You want a molecule that binds quickly and efficiently, and one calculation that can help sort this out is ligand efficiency, which looks at the binding affinity per heavy atom (any atom larger than hydrogen) of a fragment. An efficient binder with a micromolar binding constant might be a better choice than a compound that binds slowly but exhibits nanomolar affinity.

A computational technique called docking, which uses randomized movements of molecules and binding energies to calculate favorable interactions, can also be useful as part of a screening and validation strategy under certain circumstances, Erlanson adds. These types of computational screens get reasonable results, he says, but can’t always predict binding if conformational changes to the protein are involved.

Once you have a set of validated hit fragments, you’ll have to decide on a strategy for expanding the size of fragments that bind weakly into larger compounds that bind more tightly. Building a larger structure that also maintains the binding properties of the original fragment can involve some time-consuming and tedious medicinal chemistry.

If your chemistry expertise and resources are relatively limited, try a simple initial approach called “SAR by catalog,” Hubbard says. Once you have some understanding of the structural features of fragments that bind to your target, you can search chemical databases for larger, commercially available molecules with the desired shape and functional groups.

You won’t be able to completely avoid doing medicinal chemistry, however. One early strategy was to take fragments that bound in different parts of a protein binding pocket and link them together. Though a few groups have done this successfully, it is more difficult than it appears. If the chemistry that links the two fragments distorts the original binding, the larger compound may lose its affinity for the target.

A more consistently successful approach is to gradually increase the size and the number of functional groups added to an initial hit fragment. Growing your fragment might involve more than just adding appendages, however. As you think about making and testing compounds based on your fragments, you might even want to redesign its core structure to assist with binding, Hubbard says.

Optimization of these next rounds of compounds can be accomplished using functional biochemical assays rather than the biophysical screening approaches used with the fragments.

Fragment-based discovery is not necessarily a quicker path to discovering new compounds, Hubbard says, but it can take you to new places. “You’ll find compounds that you can’t find by any other method.” 