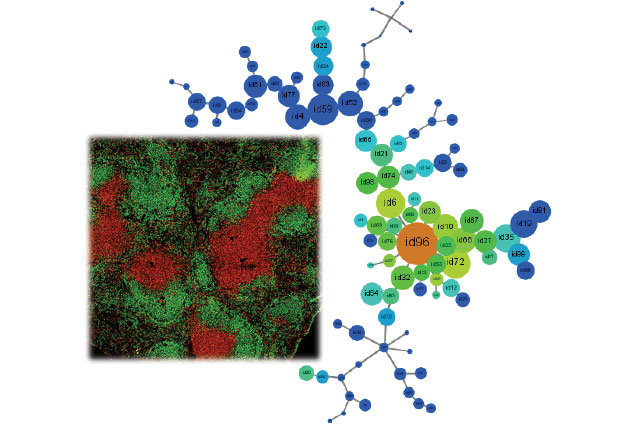 MAPPING THE NEIGHBORHOOD: Mouse spleen section stained with 30 antibodies, but showing only two at a time (left). The schematic on the right uses all 30 antibodies to determine cell types and cell neighborhoods. Using tissue sections, immunologists can consider cell types in the context of the tissues and neighborhoods in which they reside. COURTESY GARRY NOLAN

It was a good day for immunology when Stanford University’s Garry Nolan met Scott Tanner at a conference in 2009. Tanner’s University of Toronto lab had developed an instrument that could simultaneously measure the expression of 40–50 unique markers in individual cells of a blood or tissue sample.

The tool was Cytometry by Time of Flight, or “mass cytometry” (see “Flow Cytometry for the Masses,” The Scientist, December 2011). As part of this technique, which was a 2011 Top 10 Innovation winner in The Scientist’s annual competition, antibodies...

Cytometry by Time of Flight, or CyTOF as it has come to be known, could be used for general pathology or disease diagnostics, but Nolan immediately grasped its power for studying the immune system, which is characterized by a multitude of subtle differences in cell types. In a seminal 2011 paper, Nolan and his colleagues measured 34 proteins and other parameters in single cells from human bone marrow and, by triggering known pathways, identified the phenotype and function of each cell (Science, 332:687-96).

Mass cytometry can detect three or more times as many unique markers as conventional flow cytometry, which caps at 10–15. Still, nothing’s perfect. Whereas conventional analysis can examine 20,000 cells per second, CyTOF, which is marketed by Fluidigm for ~$650K, is currently limited to 1,000 cells/second. And cells are vaporized in the process, so the original sample cannot be further analyzed. Comparing it to Star Trek’s universal medical diagnostic tool, Nolan notes that “Until we have Dr. McCoy’s tricorder, we’ve got to make the most of what we’ve got.”

To explore what CyTOF can teach us about the immune system, The Scientist interviewed researchers who are using this new technology to understand immune signals associated with several perplexing diseases. 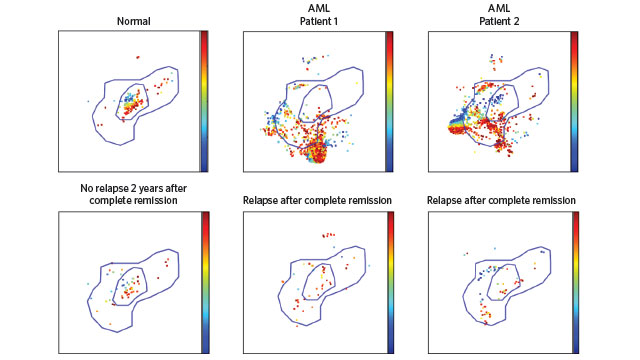 Project: Some 70 percent of patients who achieve remission following treatment for acute myeloid leukemia (AML) eventually relapse, in part due to a subpopulation of immune cells that becomes resistant to chemotherapy. Behbehani studies how this resistance develops.

Approach: Most AML drugs either kill immature cells or block signals that prevent the cells from maturing. Behbehani’s lab uses CyTOF to home in on subgroups of AML cells with a phenotype that renders them resistant to a drug. A key component of accomplishing that goal is developing antibody panels capable of revealing cell-cycle markers that indicate a cell’s level of maturation, as well as markers to which a drug of interest binds.

At least a hundred different genetic mutations are associated with AML, and these mutations can occur in thousands of different combinations. CyTOF can identify the wide range of functional phenotypic properties that these mutations generate, and can suggest how to target an individual’s leukemia cells. One person may need a chemotherapy agent to kill fast-growing cells, while another might benefit most from a signal inhibitor that allows the leukemia cells to grow up and die on their own. Behbehani recently demonstrated that most immature cell populations had very different cell cycle and intracellular signaling properties across AML subtypes. (Cancer Discov, 5:988-1003, 2015).

Tips: Each set of antibodies used for a CyTOF run must be carefully selected, then tagged with metals (if you’re not purchasing a predesigned panel); the cells must be incubated with the metal-tagged antibodies, and the signal tested against a reference before it’s used in unknown samples. That’s a time-consuming process. “If you don’t need to look at 30 things simultaneously, it’s probably easier to do regular fluorescent flow cytometry,” Behbehani says.

He also advises new users to do careful controls, as a missed control is often the culprit behind data full of artifacts or doublets, which occur when ion clouds fuse with each other during vaporization. The best strategy for managing doublets is to reduce the rate at which cells are sampled during CyTOF, and to label antibodies with combinations of metals, such that a doublet would appear as a combination that can’t occur on its own.

Looking Forward: As new drugs for AML are tested in clinical trials, Behbehani plans to use CyTOF to identify subpopulations of immune cells affected by these compounds. The idea is to determine how drugs work at the single-cell level, and to better match a particular patient to his or her most effective therapy option. 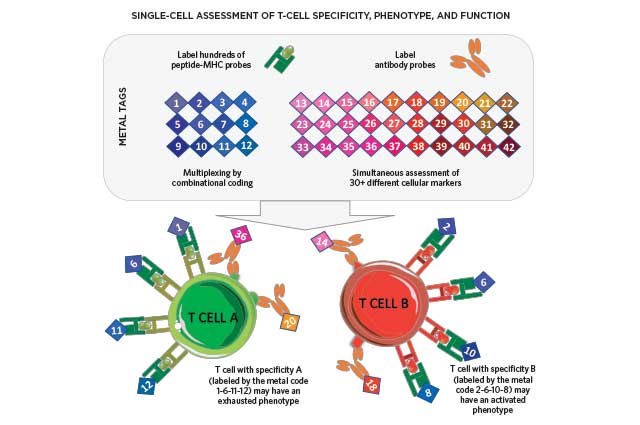 ACTIVITY PROBING: Peptide-MHC probes and antibody probes are labelled with combinations of metal tags. These bind to T cells with different specificities (A or B) that may have exhausted or activated phenotypes. The novel multiplexing technology allows for probing of extensive candidate targets in a single sample. COURTESY EVAN NEWELL

Project: Newell’s lab aims to identify and profile antigen-specific T cells that respond to cancers and infectious diseases such as hepatitis B virus (HBV), with the goal of developing immunotherapies that can modulate these cells’ responses.

Approach: Newell’s lab uses CyTOF to look for candidate T cells involved in HBV or cancer, but with a twist: the researchers add a cocktail of so-called model antigens to their antibody panels in order to boost the number of markers they can track. Model antigens are peptides combined with other molecules known to activate T cells in response to foreign antigens. Called peptide-MHC tetramers, these laboratory-synthesized structures are also labeled with unique combinations of metal isotopes. They bind to yet another type of T-cell surface molecule that recognizes fragments of an antigen. This multiplexing technique provides the opportunity to identify and characterize, at a single-cell level, hundreds of different T-cell specificities in one CyTOF run. The team is currently screening more than 500 possible antigens specific to HBV (Nature Biotechnol, 31:623-29, 2013).

Common Resource: Newell and colleague Michael Wong, now at Merck, have also created an atlas of T-cell types from 8 different human tissues, charting out cells that are found across tissues and those that are unique to each. They are now studying how antigen specificity of these cells leads to diverse profiles in different tissues (Immunity, 16:442-56, 2016).

Challenges: Cell preparation and data-gathering rates in mass cytometry are less efficient than in flow cytometry, although the techniques are improving. “Often, I have to perform a 15–18 hours nonstop acquisition for my precious patient samples,” says Yang Cheng, a graduate student in Newell’s lab. The same samples can be processed in 4 hours using flow cytometry.

Visualizing and understanding these large, multidimensional data sets also poses an analytical challenge. To help solve this problem, Newell published an algorithm that helps to distinguish T-cell diversity according to user-defined categories, which include different markers specific to functionality and markers that indicate stages of T-cell differentiation (J Immunol, 196:924-32, 2016). “The awesome thing about this algorithm is that it’s not only applicable to mass cytometry data, but [we’ve] also used [it] to analyze NBA basketball statistics,” says Wong.

Project: Brenner and Rao seek to identify specific types of immune cells that cause rheumatoid arthritis, an autoimmune disease in which the immune system attacks the synovial membrane that lines joints, as well as other tissues. Ultimately, their goal is to identify abnormal immune pathways and to understand how to manipulate the signals that regulate them.

Approach: The researchers used CyTOF with a cocktail of 35 different antibodies to recognize the proteins on individual cells, and thus identify the subgroups of immune cells that infiltrate the joints of people with the condition. They found that a quarter of all CD4+ T helper cells, which regulate the activity of all other immune cells, had exceptionally high expression of programmed cell death protein 1 (PD-1), a cell-surface receptor that acts to tamp down T-cell activity and promote self tolerance (Nature, 542:110-14, 2017).

To figure out what these PD-1–marked T cells were doing, Rao and Brenner stained another sample with just the antibodies that had been found attached to the subgroups present in the tissues, and conducted gene expression profiling in these cells. Doing so revealed that the PD-1–enhanced T cells in the patient’s joints are in fact still functioning—and indeed, are stimulating B cells to produce antibodies within the inflamed joint tissue, effectively fueling inflammation.

Limitations: CyTOF triples the number of markers that can be measured on one cell in a single run compared to conventional techniques, but it requires a relatively large sample size, approximately 50,000 cells. In some contexts, this can be a problem. Rao and Brenner could obtain the needed sample size, but Rao notes that identifying a subpopulation is just the start—CyTOF provides no information on how this subpopulation arises. To get at these questions, he stains a new sample with the same antibodies and sorts the cells using conventional flow cytometry, to obtain samples for RNA sequencing.

Looking Forward: Rao and Brenner next plan to develop modified CyTOF antibody panels to home in on other populations of immune cells that regulate how the PD-1–enhanced T cells signal in rheumatoid arthritis. They will also use this approach to explore whether these cells pop up in other autoimmune diseases. 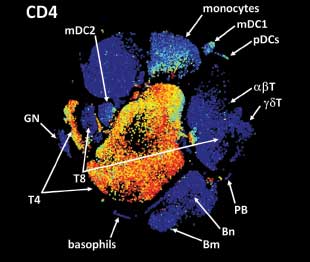 Project: Mingueneau and Mariette are investigating how different immune-cell types contribute to Sjögren’s syndrome, an autoimmune disease that causes dryness of the eyes, mouth, and other exocrine glands, as well as many systemic complications including lymphoma.

Approach: Previous efforts to characterize Sjögren’s focused on a few cell types or subsets. In contrast, Mingueneau and Mariette designed a CyTOF antibody panel encompassing 34 surface markers to detect a broad range of lymphoid and myeloid cell subsets, thus targeting many of the most common types of immune cells. Using this panel, they compared blood and lacrimal gland biopsy samples from 49 individual patients with those of 45 control donors to identify key pathogenic cell types (J Allergy Clin Immunol, 137:1809-21, 2016).

They identified multiple immune-cell profiles that had not previously been considered pathogenic in Sjögren’s. For example, patients with low numbers of helper T cells and memory B cells, as well as those with high numbers of activated killer T cells, experienced more-severe disease. Mingueneau and Mariette hope to use these results to optimize therapies for individual patients. “This is a first large-scale clinical application of mass cytometry to stratify a patient population with a chronic disease,” says Mingueneau.

Challenges: Mingueneau and Mariette have gone a long way towards demonstrating CyTOF’s clinical application, but the cost of the machine and the complexity of operating it limit CyTOF’s broader adoption for now. Researchers are developing easier-to-use, standardized instrumentation that will be crucial for its use in clinical settings.

Looking Forward: In addition to potentially obviating the need for repeated tissue biopsy sampling during clinical trials, the researchers hope that their CyTOF analysis can match therapies to individual patients. “One could envision in the future enrolling patients in clinical trials according to their disease biomarker signature,” says Mingueneau.