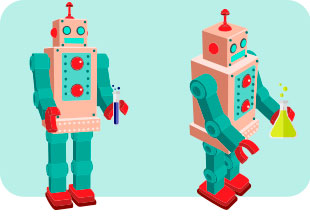 ADAPTED FROM © ISTOCKPHOTO.COM/MONSTITJInduced pluripotent stem cells (iPSCs)—adult cells reprogrammed to act like they had never differentiated—have been game-changers in the life sciences. They have already emerged as invaluable tools for studying the mechanisms of genetic disease and for screening drugs. And scientists hope that iPSCs will yield therapies to treat conditions from spinal injury to heart disease.

But reprogramming adult cells into iPSCs and then expanding and differentiating the newly pluripotent cells into cell types of interest can be a tedious and error-prone task. Whether it’s pipetting specific volumes of solution or sticking to strict incubation times, the human touch invariably contributes imprecision.

Feeding, reprogramming, and picking iPSC colonies is “exceptionally labor-intensive,” says Evan Snyder, a stem cell biologist and physician at Sanford Burnham Prebys Medical Discovery Institute and the University of California, San Diego. “You really have lots of people sitting under a hood using...

Paull and his colleagues at NYSCF recently completed a $25 million project to fully automate their stem cell reprogramming and differentiation workflow. Other labs and companies are adapting liquid-handling robots, colony-picking machines, and automated imaging platforms to reprogram and assess cells.

The question is when to invest in automation equipment; when to outsource iPSC generation, culture, or differentiation; and when to hire an additional set of hands and keep the process manual but in-house. The Scientist asked the experts, and here’s what they said.

Automation all the way

For NYSCF, where iPSCs are a bread-and-butter technology, a fully automated system makes sense. Paull helped to spearhead the development of a setup that conducts high-throughput reprogramming, differentiation, and quality control of induced pluripotent stem cells (Nat Methods, 12:885-92, 2015).

The NYSCF system consists of off-the-shelf components—liquid handlers, cell imagers, centrifuges, tube decappers, a cell separator, and incubators, along with plate shuttles and robotic arms to move cells around.

These machines are mixed and remixed in a variety of modules. One bank of robots cultures, expands, and freezes skin fibroblasts from patients, preparing them for reprogramming to the pluripotent state. Nearby, a liquid handler and plate reader test the cell culture media for contamination with Mycoplasma, adding reagents that make the media glow in the presence of contamination. A separate liquid-handling and culture system delivers a daily squirt of mRNAs encoding reprogramming factors to samples that have been deemed Mycoplasma-free.

To sort newly dedifferentiated cells from ones that remain differentiated in a plate, a liquid handler adds magnetic beads that bind to fibroblasts but not to pluripotent cells and moves the cells to a separator; the separator applies a magnetic field as the cells flow through a column, fishing out the unreprogrammed fibroblasts while allowing the iPSCs to flow through. Imaging software also helps researchers select wells of pluripotent cells on which to perform quality control. Yet another liquid-handling system aids in differentiating the iPSCs into new types of adult cells. Researchers interact with the system via touchscreens.

Paull’s team found that their automation process boosts the consistency of iPSCs. Overall, about 20 percent of human iPSCs show chromosomal abnormalities, according to a previous review (Cell Stem Cell, 7:521-31, 2010). But with the NYSCF system only 11 percent of cells tested had these irregularities. Cells derived from the automatically generated iPSCs also showed less variation in gene expression than manually generated ones. The researchers were able to differentiate fibroblast-derived iPSCs into cardiomyocytes and neurons, showing that machine-generated iPSCs are capable of producing desired mature cell types.

Paull and his colleagues say that their relatively high-quality and low-variability yield stems from how they multiply the cells after reprogramming. Many manual processes involve isolating single iPSC colonies that appear to be fully reprogrammed and expanding them as separate lines. Instead, NYSCF’s automated system expands pools containing multiple clones. It may be easier for cells from a single colony to gain aberrant mutations and take over a cell line, Paull speculates. In the multicolony approach, even if a mutation arises it is less likely to take over.

Generating so many iPSCs in parallel and reducing human error has another benefit: NYSCF’s automated system allows users to spend five to six times less money on reagents than they would using manual iPSC-generation approaches. Another advantage is the system’s ability to record every action it performs. “We always can go back and check what’s happened and confirm that everything happened the way we said it did,” says Paull. “We’re not reliant on people writing down what they think they did.”

NYSCF uses the automated setup to generate lines for its own stem cell bank and also generates lines for other organizations at cost, with price depending on NYSCF’s involvement in recruiting patients, the levels of quality testing performed, and the number of cells ultimately being generated.

A German consortium guided the design of a fully automated “stem cell factory” consisting of a series of ready-made and custom machines that reprogram and expand iPSCs. Martin Zenke, a cell biologist at Aachen University’s Institute for Biomedical Engineering, together with the University of Bonn’s Oliver Brüstle, led the effort after becoming frustrated with the relentless nature of generating iPSCs. “There is no vacation,” Zenke says. “There is no break.”

Aachen is a center for engineering, so Zenke recruited some engineers from his university and the nearby Fraunhofer Institute for Production Technology to build an automated system for generating iPSCs. The resulting machine consists of a liquid-handling unit, a customized high-speed microscope, a colony picker, a plate reader, a centrifuge, a shaker, a decapper, and an incubator, all contained in a sterile environment under a large hood. The electronics and data interfaces vary widely from component to component, Zenke says. “The challenge is to get them interconnected.”

The engineers combined the instruments with a central track and robotic arm to move cells between stations, and they programmed the various machines to add reprogramming factors to fibroblasts, feed them, select promising colonies, and expand those colonies.

In contrast to the NYSCF system, the StemCellFactory picks single colonies for expansion. The components of the system also are more fully interconnected than those of the NYSCF system, without need for researchers to carry samples between machines.

Currently, the StemCellFactory is housed at LIFE & BRAIN GmbH, a translational biomedicine center in Bonn, Germany, that Brüstle helped found. So far, the machine only generates stem cells for in-house use. The researchers hope to eventually sell versions of the automated system, estimating that the current version would cost about €2 million. “It’s not a device which you put in your laboratory if you would like to now and then do a few iPS cells,” Zenke says. He expects it will find a place at institutes involved in large-scale stem cell banking initiatives. In the future, LIFE & BRAIN may also sell cell lines generated using the device.

A LEAP in Efficiency 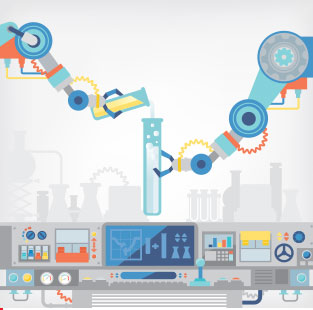 © ISTOCKPHOTO.COM/WHANWHANAIOf course, few labs need full-on automation. Automating just a few parts of the iPSC-generating process, such as colony picking and expansion of the cells, may be worth the time saved, says Snyder.

Snyder and his colleagues at Sanford Burnham Prebys use a system called LEAP, for laser enabled analysis and processing (Curr Protoc Stem Cell Biol, 31:4A.7.1-4A.7.15, 2014), which consists of a laser, a microscope, and imaging software and is in development by Intrexon for cell purification applications. When applied to iPSC generation, LEAP searches for cells labeled with antibody markers indicative of full pluripotency. The system uses a laser to eliminate cells that have not been dedifferentiated and a micromanipulator to select reprogrammed cells for expansion.

The method frees technicians from manually selecting colonies. On top of reducing labor, the approach cuts the risk of contamination, as cells remain in a single dish without contact with outside containers or machinery. The laser can also slice pluripotent stem cell colonies into pieces for expansion, freeing researchers from manually cutting up colonies.

Sanford Burnham Prebys received the LEAP laser at no cost from Intrexon because the company hoped Snyder’s team would pioneer its use for iPSC production. LEAP is currently not for sale, but scientists can contact Intrexon to inquire about collaborating. Snyder and his colleagues also generate iPSC lines at cost for other researchers—$2,500 to $3,000 per patient sample.

Some researchers may wish to automate just the most tedious step in iPSC generation: expansion, in which the cells are fed and repeatedly divided onto new plates as they multiply. Tetsuro Wakatsuki, cofounder and chief scientific officer of
InvivoSciences in Madison, Wisconsin, hopes a robotic platform his team designed, called Auto Cell and Tissue Culture Robot (ACTRO), will fill this need at a reasonable cost (J Vis Exp, 99:e52755, 2015).

Wakatsuki and his colleagues began developing ACTRO because they wanted to generate more-uniform cell lines.
InvivoSciences has a contract with the National Center for Advancing Translational Sciences to build three-dimensional cell cultures from differentiated iPSCs for drug testing; the company is starting with heart muscle cells.

With ACTRO, researchers still must reprogram their iPSCs by hand. But when it comes time to produce large numbers of them in culture, the robot takes over. The researchers used Gilson’s liquid-handing robot PIPETMAX to seed stem cells in 96-well plates. The small format of the wells allows the stem cells to secrete factors that keep each other from differentiating, Wakatsuki says.

When the cells become too numerous, the researchers can instruct the robot to passage the cells, transferring some to a new 96-well plate. The robot is operated through a touchscreen.

The researchers examined two iPSC lines that they had passaged 20 times over the course of approximately three months, finding that they retained the right number of chromosomes and could differentiate into heart muscle cells.

ACTRO does require hands-on attention, however. A technician must keep track of when to feed or passage cells by visual inspection, manually set up the machine for either process, and must carry the cells from the incubator to the liquid handler. Despite that, the device can save investigators from tedious pipetting and reduce inconsistencies and mistakes.

InvivoSciences plans to price the system at well under $50,000, according to Wakatsuki. “We would like to maintain [the price] so that a smaller lab can afford this system, or maybe share [it] with a few labs,” he says. Other versions of the robot in development would also aid in reprogramming, colony picking, and cell differentiation.

Sticking to the Old Ways 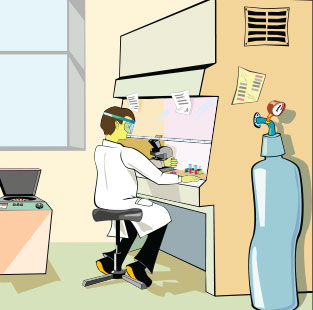 © ISTOCKPHOTO.COM/SPRYSHCDespite these options, many smaller labs are sticking with pure manual labor for now. One is the iPSC core facility run by Chad Cowan at the Harvard Stem Cell Institute. Solutions like NYSCF’s automated behemoth are not on the table for most organizations, he says. “I’m definitely not motivated to try to recreate it here at Harvard.”

Cowan and his staff did recently test a system consisting of an automated cell-picking system called the AVISO CellCelector (Automated Lab Solutions) combined with a cell imaging system and imaging software that identifies correctly reprogrammed colonies. But, when compared head-to-head with the Harvard staff, the robotic system was not a clear winner. “The resulting iPS cells were more consistent, but they weren’t necessarily uniformly better,” he says. Cells picked with the robot might show a certain marker more consistently than manually picked cells, but they wouldn’t differentiate any more effectively.

Michael Christman, president and chief executive officer of the Coriell Institute for Medical Research in Camden, New Jersey, agrees that for most labs, it’s not yet time for automation.

While Coriell collaborates with groups that have set up automated iPSC generation systems, the institute uses a manual process in-house. Coriell also runs a stem cell bank and regularly conducts quality control on iPSCs and so receives large numbers of lines from a variety of sources. Lines made via automated methods are not immune to quality issues, Christman notes. While a well-validated and designed automated method should produce consistent, high-quality cells, he says, a poorly done automation process could introduce widespread errors.