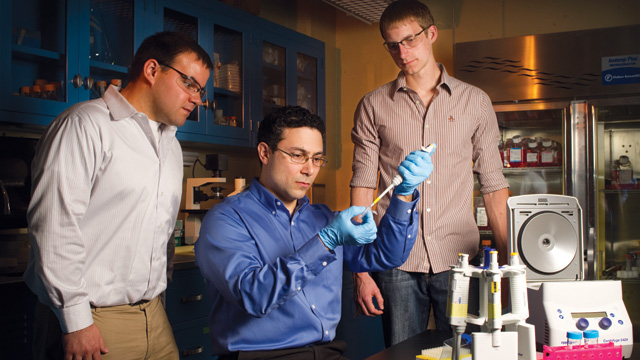 NO COLUMN REQUIRED: Exposing monoclonal antibodies to multivalent haptens produces high-molecular-weight complexes that can be easily processed by precipitation. Basar Bilgiçer (center), who developed the technique, gives a demonstration of its simplicity to graduate students Nathan Alves (left) and Michael Handlogten (right) in his lab at the University of Notre Dame. WES EVARD, COLLEGE OF ENGINEERING, UNIVERSITY OF NOTRE DAME

Monoclonal antibodies have become increasingly important in biomedicine in the past decade, not just in research but also in designing novel therapeutics, particularly to treat cancer. The pharmaceutical industry produces roughly 10 tons of monoclonal antibodies each year, and more than half of all drugs in development use them.

However, separating the antibodies from other cellular components in the cell-culture medium can be costly, technically difficult, and time-consuming. Typically, the antibodies must be filtered from the supernatant soup into which they have been secreted using a technique known as affinity chromatography. Columns containing Protein A or Protein G—bacterial proteins that bind to immunoglobulins—capture the antibodies as they travel down the column, leaving the cellular waste to pour through. Dropping the pH then frees the antibodies for collection. But the method is tricky: lowering the pH too much risks causing the antibodies to misfold and become inactive. In addition, the bacterial proteins degrade after multiple uses and can contaminate the isolated antibodies. The price of Protein A or G can also be prohibitive for smaller academic labs with limited resources. All in all, purification accounts for as much as 80 percent of antibody production costs.

The Scientist spoke with researchers who have improved chromatographic techniques or devised nonchromatographic alternatives for antibody purification, making the process easier and more affordable. Here’s what they said.

The Need
Affinity chromatography is expensive, largely because of the high price of the resins that line the columns: typically a combination of beaded agarose coupled with antibody-capturing proteins such as Protein A or Protein G; 1 mL of resin can cost as much as $100. As a postdoc at Harvard University, Basar Bilgiçer discovered a cheaper way to purify antibodies by taking advantage of molecules called haptens—pieces of antigen that can interact with antibodies but do not induce an immune response unless attached to a larger  carrier molecule.

The Method
Research conducted over two decades ago had shown that haptens could induce antibodies to clump into complexes, which led Bilgiçer, now an assistant professor at the University of Notre Dame in Indiana, to believe that he could use the molecules to pull antibodies out of the cell-culture medium into which they had been secreted. First, they cleared most of the larger proteins out of the antibody-containing medium by using ammonium sulfate (AMS) to precipitate heavy molecules. To the remaining solution they added haptens that had been synthetically manipulated to carry multiple binding sites. Most antibodies have a bivalent structure—two arms, each containing one binding site—which allowed the haptens to link with multiple antibodies at once. This caused the antibodies to cluster, increasing the molecular weight, which enabled the researchers to again use AMS to precipitate the clusters—cutting out the need for chromatography altogether. The process captured 80 percent of the antibodies found in the original cell-culture solution (J Am Chem Soc, 131:9361-67, 2009).

Pros and Cons
Chromatography only binds antibodies at a single site, which means damaged antibodies with only one functioning binding site can make it into the purified substrate. The technique of Bilgiçer and his colleagues guarantees that only antibodies with two fully functional sites are captured; this boosts the ability of the purified antibodies to interact with their targets. Antibodies with two functional binding sites might interact with tumor cells in the body for days or weeks, thus enhancing their therapeutic potency; those with just one functional site might only keep contact with tumor cells for a few hours. “It is like doing pull-ups with both arms versus with just one,” says Bilgiçer. “The extra muscles will make the job easier and more efficient.”

The researchers tested the method using rat and mouse immunoglobulin G—antibodies predominantly expressed in response to viruses and bacteria—which are commercially available and relatively inexpensive. They also chose these antibodies in part because they bind well with two haptens—one a common research reagent and another used in heart-disease medicine. But these molecules were “really just test systems,” says George Whitesides, a biochemist at Harvard who was a coauthor on the study, as well as Bilgiçer’s supervisor on the project. “The technique has not been used on a real antibody of commercial interest.”

Applying the technique to purify a different antibody would require synthesizing a hapten that specifically binds to it. Mario Lebendiker, a biophysicist who heads the Hebrew University of Jerusalem’s Protein Purification Facility, is skeptical about the applicability and ease of the process. “I have my doubts about how many people will be tempted to try it,” he says. “It looks difficult, expensive, and not so practical.” But Whitesides notes that if you know which antigens will react with your antibody, creating the hapten is not difficult, and the technique is easily reproducible. But if you don’t know, making the hapten will require some trial and error, he concedes.

Cost and Availability
AMS costs $15 for 500g and is one of the cheapest reagents available. Bilgiçer calculates his group—which had the right haptens in hand—paid roughly 32 cents per 25 mg of purified antibodies. In comparison, purification using Protein G chromatography cost his lab $130 for 25 mg of antibody. The Need
In addition to being expensive, affinity chromatography is also labor-intensive: extracting the antibodies from the cell-culture medium using Protein A or G is usually just the first step. Follow-on manipulations, such as capturing antibodies based on their charge, hydrophobic interactions, or size, are often needed to further purify the molecules from the culture medium. This can add as many as two or three steps on top of affinity chromatography.

Most large industry labs have the resources to undertake the process, but smaller groups with less experience in or financial support for antibody research may not. Massimo Morbidelli, a chemical engineer at the Swiss Federal Institute of Technology in Zurich and president of the biopharmaceutical company ChromaCon AG, and colleagues wanted to cut down the three- or four-step process to just two.

The Method
Morbidelli and his colleagues turned to so-called mixed-mode resins, which carry organic compounds that can perform multiple functions in a single step. The compound in the resin they used—called Capto adhere and produced by GE Healthcare—is positively charged and also contains hydrophobic groups, attracting antibodies with a negative charge and hydrophobic amino acids in a single step (J Chromatogr A, 1217:5753-60, 2010).

Pros and Cons
Mixed-mode resins involve more work than traditional chromatography on the front end in that buffers must be optimized for both salt and pH level. On the plus side, once you determine the right buffer characteristics, you can use the formulation for multiple antibody preps. Lebendiker notes that the technique looks “promising” but requires further testing.

Cost and Availability
Cutting out chromatography steps using Capto adhere reduced Morbidelli’s cost of antibody purification to one-fifth that of the multistep approach. GE Healthcare sells one 25-mL container of the product for approximately $175. Mixed-mode resins are also available from other companies, including Pall Life Sciences and Bio-Rad. MIXING IT UP: Affinity chromatography can be simplified by using mixed-mode resins. In this photo an employee of ChromaCon AG is using a 2-column lab-scale unit of the company’s ContiChrom platform.
CHROMACON AG, SWITZERLAND

The Need
Producing antibodies isn’t easy: they must be expressed in mammalian cells or yeast, which can take weeks. But technically, the entire molecule isn’t necessary, reasoned Daniel Christ, an immunologist at the Garvan Institute of Medical Research in Australia. Fragments containing the binding sites that interact with antigens are “the business end of the molecules,” he says. “The rest of the antibody is trivial.”

Such antibody fragments are one-tenth the size of full antibodies, so they can be expressed in bacteria such as Escherichia coli, which are much easier to work with. Bacteria also take just a few days to produce an adequate supply. But in order to pull fragments from cell-culture solutions using affinity chromatography, the column resins must contain “superantigens,” proteins from pathogenic bacteria that can strongly glom on to antibodies outside of their two major antigen-binding sites. Due to the commercial development of artificial superantigens in recent years, Christ and his colleagues could finally purify fragments just as they do whole antibodies.

The Method
The researchers, collaborating with the Gaithersburg, Maryland-based company MedImmune, performed a standard affinity chromatography separation, but instead of using the usual resins they used resins containing superantigens (Nature Protocol, 7:364-73, 2012). In this case, the resin in the column contained the superantigens Protein A—also used widely in normal affinity chromatography—and Protein L.

Pros and Cons
The affinity chromatography procedure for fragment purification is the same as for whole antibodies. Most researchers who conduct antibody purification are already familiar with it, so there’s no new technique to learn. However, it is expensive. Another drawback is that purified antibody fragments are easily broken down in the kidney because of their low molecular weight, which means that they have short half-lives in humans. This limits their use in applications such as immunization, says Christ. Yet another downside, says Lebendiker, is that the technique may be difficult to scale up, making it unavailable for industrial production of antibodies.

Cost and Availability
Protein L resins can cost $60–$130/mL if purchased in small amounts (5 mL or less). Protein A is cheaper at just $20–$35/mL in small amounts. A typical laboratory-scale purification yielding 5–10 mg of antibody requires about 2 mL of the protein-resin mixture. You can purchase the resins through GE Healthcare, GenScript, and CaptureSelect.