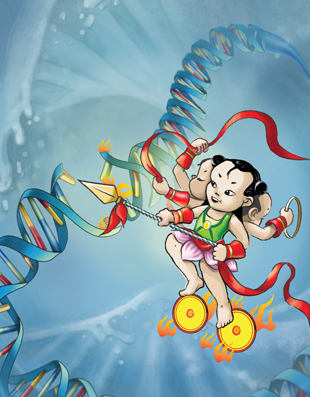 DESIGN BY ZENGRONG ZHU, KIHYUN LEE AND QING LI. ARTWORK BY TERRY HELMS..Scientists have a fever for genome tinkering, and the latest thing shooting up temperatures is CRISPR. The number of publications referring to CRISPR/Cas technology has mushroomed since its first use as a genome-editing tool in 2012. In a testament to the method’s popularity, a recent guest lecture at Vanderbilt University by CRISPR pioneer and 2015 Breakthrough Prize winner Jennifer Doudna packed a 300-person classroom and a 160-person overflow room—which then itself overflowed, recalls attendee Douglas Mortlock, a research assistant professor at Vanderbilt who blogs about advances in CRISPR technology.

CRISPR (clustered, regularly interspaced, short palindromic repeats) is named for particular DNA loci that are found in many archaea and bacteria. CRISPR works with associated nucleases, including Cas9, to protect the cells from viral infection by inserting short snippets of viral DNA into the CRISPR cassette....

Anticipating the potential for the technology to cure human genetic diseases, researchers want to make the CRISPR/Cas9 system as efficient and specific as possible. Its chief drawback has been that, once inside the cell, it can dock (and cut) at undesired sites, potentially producing off-target edits that could be a deal breaker for clinical applications. Researchers are working on ways to avoid such unintended edits, including better tools for predicting edit sites in the first place. Scientists are also developing more-efficient ways of getting CRISPR elements inside cells, because only a small subset of cells takes up the system.

Last March, The Scientist published a newcomer’s guide to CRISPR (see “A CRISPR Fore-Cas-t”). In the intervening year, researchers have ramped up efforts to improve the technique. Here are some of the methods they’re exploring.

A CUE FROM CANCER 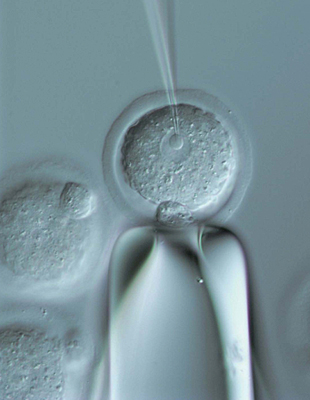 MUTATION MANAGEMENT: A single-celled mouse zygote is microinjected with the CRISPR/Cas9 system. Addition of SCR7, an anticancer drug, shortly after injection alters the ratio between two DNA repair pathways to reduce unintended mutations that can arise during the gene-editing process. CHRIS ABRATTESkewing DNA repair with small molecule SCR7

Problem: CRISPR/Cas9 editing works by making breaks in the genome that are repaired via one of two pathways. The broken ends are glued back together in a process called nonhomologous end joining (NHEJ), which is efficient but error-prone; or, if you supply a synthetic piece of DNA containing the precise desired mutation, it can be incorporated through homology-directed repair (HDR).

“The problem is that those two processes are in competition,” says Schimenti. “The end joining [NHEJ] becomes a nuisance because way more of the experimental mice turn out to contain these unintended mutations due to the end joining.” His group needed a way to tip the scales toward the HDR pathway to produce more-precise edits.

Solution: For Schimenti’s group, a clue about improving the HDR/NHEJ ratio came from past genome-editing studies of Drosophila embryos, in which researchers genetically inhibited a molecule (DNA ligase IV) involved in the NHEJ pathway. It so happened that a small-molecule inhibitor of that ligase, SCR7, was subsequently identified as a potential treatment for cancer; Schimenti’s group decided to try SCR7 instead of genetic perturbation.

Getting started: Simply add SCR7 to your media after microinjecting Cas9 and synthetic DNA into your single-celled zygote. Other groups, such as Douglas Mortlock’s at Vanderbilt University, are also trying it. Schimenti’s lab routinely adds SCR7 to their experiments because it doesn’t seem to hurt, though “to see if it really helps for other genes, you’d have to try to make mice with your designed event, with and without the chemical,” he says.

Considerations: Zygotes bathed in SCR7 (50 μM) showed better survival rates up until the two-cell stage, but prolonged culture of the embryos in the presence of SCR7 negatively affected their progression into blastocysts, for reasons that aren’t clear. That shouldn’t be a problem, Schimenti says, since you transfer them to the female mouse before then.

Problem: Among the challenges of using CRISPR is getting the system’s components inside cells, which is usually done through electroporation. The process of inserting the system into human stem cells is especially inefficient; it takes months to create a single mutation, Huangfu says.

Huangfu’s projects necessitated deleting both copies of a gene or multiple genes, which required multiple rounds of targeting. She needed a more efficient system.

Solution: The most difficult step is to transfect the large Cas9 gene into cells, so Huangfu’s group created a cell line with the Cas9 component already integrated. To do this, they employed a related genome-editing technology, TALEN, that uses DNA-binding domains rather than guide RNAs for targeting (Cell Stem Cell, 15:215-26, 2014). “Using TALENs, we integrate the Cas9 into a very specific location in human [embryonic stem] cells, which we know is not subject to silencing effects,” Huangfu says.

The group also designed the cells so that they express Cas9 upon the addition of the drug doxycycline. The resulting approach, called iCRISPR, allows the scientists to turn on genome editing at different time points in the differentiation process. (iCRISPR is not to be confused with CRISPRi, which, similar to RNAi, reversibly blocks transcription, without cutting.)

iCRISPR cuts down the number of main steps in the protocol to one: transfecting the cells with guide RNA, which is smaller and easier to get into the cells. “We’re surprised that [iCRISPR is] working so well,” Huangfu says. Using the system, her team has been able to mutate 12 genes in a month’s time.

Getting started: Huangfu’s group has published a detailed protocol in Methods in Enzymology (546:215-50, 2014). Researchers who are already experienced with gene targeting in human stem cells can get the plasmids from Addgene and make iCas9-expressing cells themselves, she says. With all materials in hand, and the expertise, it takes one to two months to make the iCas9 cells. You should allow another month or two for making the genome-edited cell line.

Those not interested in making the iCas9 cells from scratch can contact the SKI Stem Cell Research Facility.

Cost: Plasmid costs $65 through Addgene; iCas9 cells cost $600 for the first line and $400 for the second when purchased through SKI.

Problem: Genome-editing proteins need to get into the nucleus of target cells to do their job, but delivery of CRISPR/Cas9, as with all large molecules, is a major challenge.

And when the CRISPR/Cas9 system is delivered as a DNA plasmid, the Cas9 nuclease can work a little too well: it cuts the target gene, but hangs around and cuts some more, boosting the likelihood of off-target edits.
Liu and his group reasoned that delivering the protein directly would help solve the latter problem: the proteins could do their editing for a shorter, well-defined period of time and then degrade naturally. But Liu needed a way to get the proteins into cells.

Solution: Work the group had done earlier suggested a potential strategy to deliver genome-editing proteins into mammalian cells: coat the proteins with negative charge. They then packed these negatively charged proteins into positively charged lipid-based detergents, which get swallowed by cells via endocytosis.

The protein delivery approach resulted in more-efficient genome modification and higher specificity for the targets, compared with traditional DNA transfection using a virus.

The fact that protein doesn’t stick around for long helps explain the transient spike of genome-editing activity the researchers saw in the cells, Liu says. They were also able to deliver Cas9 in vivo, modifying hair cells in the mouse inner ear. (For a different method of transfecting hair cells, see “Tricky Transfections” here.)

Getting started: Delve into the paper’s supplemental information (Nat Biotechnol, 33:73-80, 2015). “We tried to be as detailed as possible because we want as many labs as possible to benefit from this approach,” Liu says. The supplement shows how the group tweaked numerous variables to optimize Cas9 delivery. The resulting experiments should be relatively straightforward for experienced molecular biologists, he adds.

Considerations: The group also showed that the strategy can be used to deliver other large cargo, such as Cre recombinase and TALENs, and Liu’s lab is trying additional proteins.

Cost: Making your own Cas9 protein costs about $300 for starting materials. Each new guide RNA costs about $50 (for labor and supplies) if you already have the transcription and purification kits ($500).

BREAKING DOWN THE BULGE 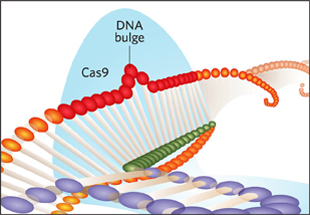 UNWELCOME EDITS: The Cas9 protein (light blue) and guide RNA (green and purple strands) can still bind to off-target stretches of DNA (orange-red), despite differences in length between the DNA and the guide pairing sequence, which produces bulges in the DNA.JOSYE UTICKCOSMID identifies two new categories of potential off-target sites for CRISPR/Cas9

Problem: The pairing sequence of a guide RNA that is, for example, 20 bases long will probably match perfectly to its target sequence in the genome, but it can also bind to 20-base-long stretches with base mismatches, as well as to other off-target sites.

These days, numerous Web-based tools are available for pinpointing off-target sequences, but the algorithms miss two additional categories of nonspecific binding that occur despite differences in length between guide RNA and the DNA it binds. For example, if the RNA guide’s pairing sequence is a base or two longer than the DNA but otherwise a perfect match, it may still bind to the DNA but in doing so produce an “RNA bulge.” Conversely, if the DNA sequence is slightly longer than the guide’s sequence, then it could create a “DNA bulge.”

Indeed, last year Bao’s group showed that off-target binding of the bulge variety can result in unwanted edits (Nucleic Acids Res, 42:7473-85, 2014). “With all those cases, we have a lot more to worry about in terms of specificity [of the guide for its intended target],” Bao says.

Solution: Motivated to identify these potential off-target effects, the group launched COSMID, which, along with many other CRISPR tools, can help users design an RNA guide to minimize the potential of nonspecific cleavage by Cas9 (Mol Ther Nucleic Acids, 3:e214, 2014). If the user has already made a guide, he or she can use the tool to search for potential off-target spots in the genome.

Getting Started: On COSMID’s website (crispr.bme.gatech.edu), select the genome of interest from the list, then enter your guide-strand sequence and related parameters to screen for the best design. Or you can use the primer-design box to help validate the potential off-target sites.

Considerations: COSMID, as with all other CRISPR design tools, not only identifies potential off-target sites, it also ranks them according to the likelihood they will occur. “The ranking itself is not so accurate,” Bao says, because many other factors play into these probabilities, so predicted off-target sequences would need to be validated experimentally.

Meantime, Vanderbilt’s Mortlock suggests you weigh the predictions in the context of your specific project goals. For instance, if you want to remove a protein product from a cell line, you may not care too much about mutating another gene. On the other hand, if you are trying to connect a mutation with a specific phenotype, then checking for off-target effects is essential, he says.

Cost: Free for noncommercial use 