A MATTER OF TIME: Optogenetics methods, which work on the millisecond timescale, allow for the finest level of temporal control over neuron excitation and inhibition. The chemogenetic tools, DREADDs and PSAMs-PSEMs, are ideal for the study of longer-lasting behaviors such as appetite, thirst, or anxiety because they work over a scale of the minutes-to-hours. The receptors are incorporated into specific neurons or cells using viruses. Ligands—CNO or salvinorin B (for DREADD receptors) or PSEMs—are administered via injection or drinking water. Both receptors and ligands are orthogonal, meaning they do not bind to anything else in the body.REDRAWN WITH PERMISSION OF SCOTT STERNSON FROM SCIENCE, 333:1292, 2011; NEUROENDOCRINOLOGY, 100:98, 2014In a pharmacology lab at the University of North Carolina at Chapel Hill, doctoral student Reid Olsen, working with brain tissue harvested from a mouse just a few hours earlier, readies half a dozen dime-size slices for...

Less than a decade ago, such precise control over neuronal activity in a dish, let alone in a living brain, was impossible. The drugs available to repress neurons or encourage them to fire would produce off-target effects or eliminate cell populations indiscriminately.

Working in the lab of Juan Song, Olsen is using a “designer receptor exclusively activated by a designer drug,” or DREADD. These modified G protein–coupled receptors (GPCRs) are usually either virally administered or bred into animals, then activated by a specific ligand that’s either injected or taken orally. Both the receptor and the ligand are designed to be orthogonal, effectively meaning they bind to each other but to nothing else.

Along with DREADDs, recently developed orthogonal ligand-gated ion channels called “pharmacologically selective actuator molecules” and “pharmacologically selective effector molecules” (PSAMs-PSEMs), are allowing researchers to dial up or dial down neuronal activity in living animals, with the goal of clarifying the brain wiring that controls appetite, thirst, anxiety, and many other behaviors.

"[DREADDs and PSAMs–PSEMs] are completely complementary methods, and they can in principle be used together in the same animal.—Scott Sternson,
HHMI Janelia Research Campus"

These are not the only so-called chemical genetic, or “chemogenetic,” tools for controlling cells. Orthogonal kinases have been used in the brain to deduce the mechanisms underlying epilepsy, memory, and neuronal development. And inducible genetic systems, now in wide use for two decades—for example, tetracycline-dependent transcriptional promoters—are incredibly powerful for expressing specific genes at a particular point in an animal’s development, says Bruce Conklin, senior investigator at the University of California, San Francisco–affiliated Gladstone Institute of Cardiovascular Disease, whose group pioneered the development of engineered GPCRs. At the other extreme of temporal control from inducible genetic systems, optogenetics—a set of methods that use light to activate genetically encoded opsins—is widely used for controlling brain cells on the millisecond time scale in vivo.

As tools, DREADDs and PSAMs-PSEMs allow control of neuronal activity over a middle ground—from minutes to hours. “These are the time scales that are most useful, in my opinion, for neurobiology experiments,” says Scott Sternson of the Howard Hughes Medical Institute’s Janelia Research Campus in Ashburn, Virginia, who has developed PSAMs-PSEMs but who also regularly uses DREADDs and optogenetics. (For a review, see Ann Rev Neurosci, 37:387-407, 2014.)

The Scientist talked to developers about the basics behind DREADDs and PSAMs-PSEMs. Here’s what they said.

In 1991, scientists showed that engineering orthogonal GPCRs was possible, and first iterations of such tools, dubbed “receptor activated solely by a synthetic ligand”  or RASSLs, came onto the scene in 1998.

Bryan Roth, of the UNC School of Medicine, made the second generation of RASSLs, which he called DREADDs, using an engineered muscarinic GPCR and, importantly, a ligand that was chemically inert (PNAS, 104:5163-68, 2007). Since the publication of that first paper on DREADDs, hundreds of labs have administered them in vivo, Roth says. This chemical genetic technique has the advantage of being easier to implement and less invasive than optogenetics, he adds.

Ligand-gated ion channel–based chemical genetic tools have their own history, but were not used in vivo in animals until 2011, when Sternson developed PSAMs-PSEMs. The researchers mutated ligand-binding domains and mixed and matched them to different ion-pore domains. But they altered the receptors and their ligands further so that they don’t interact with anything in the body. “As I was thinking about that system, I imagined I would want it to have easily optimizable, nontoxic ligands and the ability to tune the ion[-pore] or ligand-binding domain easily,” Sternson says.

There are five different classes of DREADDs available, each designed for a different purpose:


The synthetic ligand for each of the first four DREADDs is clozapine-N-oxide (CNO), whereas KORDs are activated by salvinorin B. That means combining DREADDs is now possible: Roth’s group showed recently that they could insert the hM3Dq and KORD to be able to activate and silence the same neurons (Neuron, 86:936-46, 2015).

Roth’s lab has also made light-activated (photocaged) CNO, which allows for more-precise control over the timing of DREADD receptor activation. He has not published any papers using this yet, but will provide the caged ligand to interested researchers upon request. To make use of photocaged CNO, however, you will need to surgically implant an optic cable to provide light to the brain region of interest. If you’re going to go to the trouble, you might consider optogenetics, Roth adds.

Scientists have paired different PSAMs with various ion channels and PSEMs in order to control neurons. Among the most popular:

When to opt for optogenetics

The single biggest consideration in your choice of, and among, these technologies is the temporal control needed for your experiment. Optogenetics, for example, offers the finest level of control, on the order of milliseconds to seconds. If you’re examining decision-making behaviors, for example, then optogenetics (or electrical stimulation) is for you.

If you’re studying behaviors—such as eating or drinking—or physiological changes that occur over minutes to hours, then either optogenetics, chemogenetics, or both might work.

For long-lasting behaviors being measured over the course of hours to days, a chemogenetic approach such as DREADDs or PSAMs-PSEMs is the clear winner. The ligands linger longer than short light pulses and can even be dissolved into the animals’ drinking water. The chemogenetic approach is also superior for investigating larger swaths of brain, which are challenging to illuminate using optogenetics methods, Roth says.

Researchers have also successfully combined the approaches, typically using an optogenetic approach to turn on neurons and chemogenetic approaches to switch them off in the same animal. The inhibitory DREADD hM4Di targets presynaptic terminals, which could be especially helpful if you’re investigating a region of the brain where long-range projection neurons terminate. 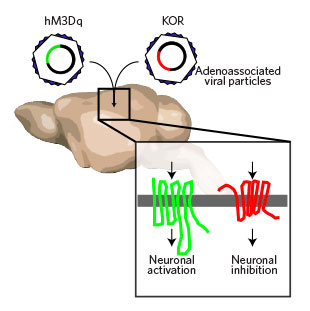 TWOFERS: In 2015, researchers announced a new DREADD: KORD. Because it is activated by a different ligand than the one for previously developed DREADDs, the engineered receptors can now be combined in the same animal.BRYAN ROTHResearchers tend to start with DREADDs simply because they have been around longer, Sternson says. But some will turn to PSAMs if DREADDs have been ineffective. “Most cell types will respond to [DREADDs] as they’re supposed to, but not all,” Sternson says. That’s because DREADDs tap into a complex signaling pathway that eventually results in neuronal activation or silencing. In contrast, PSAMs work by controlling the gating of an ion channel. On the other hand, ligand-gated ion channels may affect some types of cells, such as developing neurons, differently than they do adult cells, says Olsen, who coauthored the Neuron paper describing KORD, the newest DREADD. But in general, Sternson says, “they’re completely complementary methods, and they can in principle be used together in the same animal.”

Another consideration is that PSEMs tend to take slightly longer to work—15 minutes, compared with the DREADD ligand CNO, which takes 5–10 minutes. On the other hand, PSEMs tend to take less time to clear from the body, 1–2 hours (vs. about 2 hours for CNO). Salvinorin B, the ligand of the new KOR-based DREADD, works almost instantaneously, and the effects last less than an hour. Although these differences are minor, they may factor into your experiment.

The operational steps are similar for both tools. Most people inject viruses carrying the engineered receptors into the brain area of interest and wait two to three weeks for expression. They then administer the ligand and make their measurements.
If you’ve already performed stereotactically guided brain surgery, there’s nothing new to learn. For newcomers, a Journal of Visualized Experiments protocol describes the surgery and injection of the virally ferried chemogenetic tools (100:e52859, 2015), though it’s best to learn by shadowing someone with experience, Roth says.

Viral constructs for both DREADDs and PSAMs are available from Addgene. For DREADDs, the UNC Vector Core sells high-titer virus stocks. CNO is available for free or at a reduced price for NIH-funded investigators through the National Institute of Drug Abuse’s Drug Supply Program. For PSAMs, you make your own receptor-carrying virus. Sternson provides PSEMs to researchers for their pilot experiments, and they are available for purchase through Apex Scientific for about $15 for 10 mg, he says.

You don’t necessarily need to do surgery if you can afford mutant mice whose DREADDs are under the control of an inducible promoter, such as Cre. Such mice are available through Jackson Labs. In general, just be sure to use validated Cre driver lines, Roth says.

You should make sure the receptor is expressed and working in vitro before you move to whole animals. Expression of both DREADDs and PSAMs is linked to the translation of a fluorescent protein. On his blog, chemogenetic.blogspot.com, Roth gives more specific advice on immunofluorescent staining for visualization of DREADDs.

To make sure that the receptors are actually working involves more-detailed studies, such as the calcium imaging Olsen used to ascertain whether his activating DREADD responded to the ligand, or electrophysiological studies in slices, but the particulars depend on what mechanism your receptor-ligand uses.

“One thing that’s important to know when using these receptors is that they’re not completely off when expressed at high levels,” Conklin says, referring to DREADDs. “[Simply] by expressing them, one cannot be sure.” To get around potential abnormal background activity, you have to include a control without the receptor. Also, having a good label on the receptor is helpful. Using DREADDs in combination with an inducible transcription system, such as Cre, allows you to measure receptor expression before and after inducing it.

Although DREADDs and PSAMs-PSEMs are proving to be useful research tools for cell biologists and neurobiologists, both Roth and Sternson are actively developing orthogonal systems for potential clinical use, either as gene-based therapies that would go directly into humans or to be used in stem cell–based therapies.