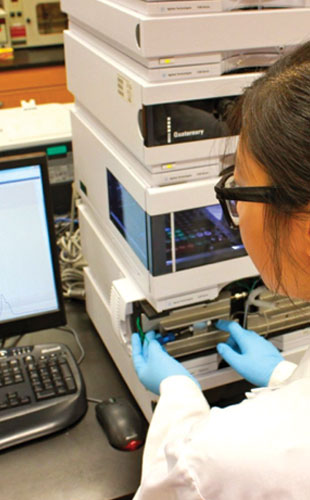 FLEXING FLAX DATA: Clara Olivia from Martin Reaney’s lab at the University of Saskatchewan looks at flax peptide peaks separated using a high-speed Chromolith HPLC column from Merck Millipore.COURTESY OF YOUN YOUNG SHIMWhen Martin Reaney began to screen chemicals extracted from hundreds of seeds in Canada’s national flaxseed collection, he wasn’t planning on using high-performance liquid chromatography (HPLC). A lipidomics expert at the University of Saskatchewan in Saskatoon, Reaney wanted to analyze genetic variations in the seeds’ hydrophobic cyclic peptides, known as cyclolinopeptides (CLPs). Although well suited for separating CLPs, his lab’s best HPLC method took about 30 minutes per sample. With 380 different genetic lines of flaxseed on hand, each of which needed to be run multiple times, Reaney thought it would be impossible to analyze the thousands of samples using liquid chromatography because it would tie up his lab’s HPLC instrument for months.

Monolithic columns aren’t the only newer type of column accelerating the pace of HPLC separations. Several advances in column-packing technology are also helping researchers save time, increase productivity, and reduce consumption of costly solvents and other reagents. Here, The Scientist surveys three types of liquid chromatography columns that can improve the speed and efficiency of separations.

During a typical HPLC run, a pump forces a solvent—referred to as the mobile phase—containing the sample through a column packed with a stationary phase comprised of particles, or beads. Depending on the application, users can purchase columns in which the surface of the beads is modified with chemicals that bind molecules in the sample. Molecules that are strongly attracted to the beads move more slowly through the column, helping differentiate components of the sample. The distance it takes for a molecule to transfer from the sample to the beads and then back into the mobile phase defines the column’s efficiency, with a shorter distance giving a sharper peak and a smaller overlap between neighboring peaks, and thus between different molecules.

To increase permeability and thus speed, engineers developed the monolithic column, first commercially available in 2000. These columns are packed with a single rod-shaped piece of silica that has a spongelike structure. The sponge features two types of pores: a large, open network of through-pores, analogous to the spaces between beads in particulate columns, and smaller mesopores, which act like the pores within a particle. The size of the through-pores in monolithic columns is much larger than the corresponding space between beads in particulate columns, which means monoliths have less resistance to flow and can operate at higher flow rates and lower pressures. The latest generation of silica monoliths, introduced in late 2011, features a more homogeneous porous structure, provides more symmetric peaks, and operates at nearly three times greater efficiency than the first monolithic columns.

Pros
• The rigid silica skeleton of monolithic columns makes them more physically stable than particulate
stationary phases. Therefore, monoliths last longer and can be reused more often, says Karin Cabrera,
head of R&D for analytical chromatography at Merck Millipore, which manufactures and sells monolithic
columns. For example, Reaney says his group has performed nearly 9,000 injections on their original
monolithic column, with very little change in performance, whereas his traditional particulate column
“did not fare well after 1,000 injections,” he says.
• Monolithic columns are less prone to clogging by sample contaminants than particulate columns,
because they lack frits—small porous discs located at the ends of columns to prevent the beads
from escaping the column—which means investigators spend less time and money purifying their
sample prior to injection.

Cons
• The separation efficiency of monoliths is not as good as that of sub-2-micron particle-packed columns
(see below), says Fabrice Gritti, an analytical chemist at the University of Tennessee, Knoxville.
Furthermore, the velocity of the mobile phase is not uniform across the diameter of the monolithic
column. As a result, the peaks eluted from it tend to be broader than those from particulate columns.
• These columns have fewer types of surface-chemistry modifications available than particulate columns.
For example, Merck Millipore has 4 surface chemistries available for their Chromolith line of monolithic
columns, whereas particulates can have 20 or more.


Applications: In Reaney’s lab, monolithic columns worked best for separating compounds known to elute far apart from each other, such as peptides with widely different polarity. Also, these columns are particularly well suited for the direct analysis of “dirty” samples, such as plasma. Cabrera says that when she injected plasma samples (diluted 1:1) directly onto a monolithic column, higher molecular weight components, such as proteins, passed straight through the column, whereas the lower molecular weight components interacted with the stationary phase and got separated.

Tip: For separations that require high resolution, two or more monolithic columns can be linked together in series with a column coupler to form one long unit, Cabrera says, since separation efficiency increases with the length of the column. However, the use of longer columns increases separation times.

Cost: The cost of silica monolithic columns is comparable to that of particulate columns, and ranges from a few hundred dollars to a few thousand dollars depending on the dimensions of the column and the surface chemistry bonded to the monolith. 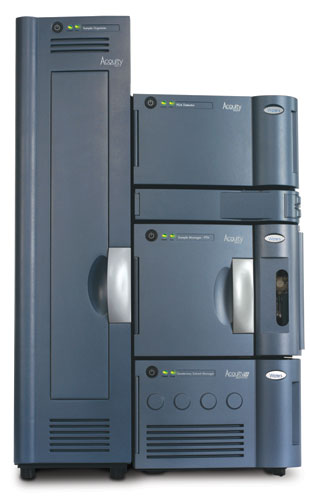 The Acquity ultra performance liquid chromatography (UHPLC) system from Waters Corporation.COURTESY OF WATERS CORPORATIONIn the 1970s, columns packed with fully porous silica particles about 10 microns in diameter dominated the scene. Theoretical studies predicted that smaller particles would provide a greater surface area, allowing for better separation and efficiency, so manufacturers gradually reduced the particle size over time. In 2004, silica particles as small as 1–2 microns in diameter—commonly referred to as sub-2-micron particles—became available. Since then, companies have continued to fill out their sub-2-micron product lines to include more surface chemistries to match their 3- and 5-micron columns, yielding a continuum of particle sizes in a variety of column dimensions. Although the next logical step would be to introduce even smaller-diameter particles (less than 1.5 microns), companies have not ventured in this direction because the pressure required to operate such columns would be colossal, says Ron Majors, a senior scientist at Agilent Technologies, which manufactures and sells a variety of HPLC columns.

Pros:
• For a column of a given length, with all other
factors being equal, sub-2-micron particles give
more efficient separation, partly because they
provide a greater surface area for the mobile
phase to interact with. “You can use shorter
columns and get the same sort of efficiency
you do on a larger particle on a longer
column,” which would typically take more
time, says Majors.
• In addition, a shorter column requires
less solvent—which can be expensive to
purchase and dispose of—than a longer
column with the same internal diameter,
run at the same flow rate, Majors says.
• Numerous surface-chemistry options are available for
porous particles, even at their newly reduced size. For
example, Waters Corporation, which manufactures and sells
fully porous particulate HPLC columns, has 20 different
surface chemistries available for their family of sub-2-
micron particles.

Cons:
• The downside of smaller particles, Majors says, is that the pressure generated during a separation goes
up by a factor of 4 every time the particle decreases in diameter by a factor of 2. Therefore, it may be
necessary to use an ultrahigh pressure liquid chromatography (UHPLC) system capable of operating
at 2.5 times the pressure of conventional HPLC systems, which max out at approximately 400 bar—thus
requiring the purchase of new capital equipment. For example, Agilent sells a series of UHPLC systems,
which range in list price from $14,500 to $100,000.
• Pumping the mobile phase through extremely fine particles at ultrahigh pressures generates heat,
and can lead to the development of temperature gradients across the diameter of the column, Gritti
says. Because migration speed varies with temperature, temperature gradients will cause the sample
components to migrate at different speeds, which will  broaden the peaks and reduce the column’s
resolution power.
• Sub-2-micron fully porous particles are small and vary in particle size. Therefore, these columns
require a 0.5 micron frit to ensure the particles don’t escape the column. This may increase the chance
that the columns clog, which could cause the pressure to skyrocket and can damage the pump, the
column, or both, Majors says.

Applications: Fully porous particles are great for retaining lightly held analytes such as hydrophilic polar compounds that would otherwise be difficult to detect, says Nicole Cotta of Waters Corporation, which also manufactures and sells UHPLC systems.

Tips:
• Several HPLC column vendors offer online “method calculators” that estimate the potential time
and solvent saved by switching from a conventional HPLC column to one packed with a smaller
particle. (For example, see one that is available from Sigma Aldrich here:  http://bit.ly/R1yAHc).
• Counterintuitively, a good way to counteract frictional heating effects caused by high pressure is to
increase the temperature of the mobile phase, which reduces its viscosity and thus the pressure needed
to operate the column, Gritti says.

Cost: The cost of these columns varies with the size of the column and the surface chemistry applied to the particles, and ranges from a few hundred dollars to a few thousand dollars.

A third option—columns packed with “superficially porous” particles (also referred to as “core-shell”, or “shell” particles)—combines high efficiency and high permeability. These particles have a solid, impermeable silica core, which is enveloped by a porous silica film where the interactions between the stationary and mobile phases take place. Very large versions (40 microns) of these particles were first introduced in the 1960s, Majors says, but they are currently enjoying a resurgence driven by their availability (beginning in 2006) in smaller sizes (from approximately 2.6 to 2.7 microns). Starting in late 2012, 5-micron particles were released, and in early 2013, particles as small as 1.3 microns became available.

CORE-SHELL BEADS: Kinetex beads, made by Phenomenex, have a porous outer layer encasing an impermeable inner layer and can improve the efficiency of a standard HPLC setup, but also work with ultrahigh pressure machines.COURTESY OF PHENOMENEX

Pros:
• Majors says that 2.6- to 2.7-micron superficially porous particles provide an efficiency that’s
comparable to sub-2-micron fully porous particles when packed into columns of the same dimensions
and operated with identical mobile phases and flow rates. The advantage is that they require half
the operating pressure, enabling researchers to use their standard HPLC setup without having to spring
for a new UHPLC.
• Operating at a lower pressure also means there is less strain on the instrument and the column,
which reduces system maintenance requirements and extends column life.
• Superficially porous particles are more evenly sized and have a higher density than fully porous
particles, so they can be packed more uniformly within the column, which reduces peak widths says
Simon Lomas, brand manager of HPLC products at Phenomenex, which manufactures and sells a
variety of HPLC columns.

Tip: To maximize the efficiency of the core-shell particles on conventional HPLC systems, some fine-tuning of the chromatograph may be necessary, Lomas says. This involves adjusting the rate at which the detector acquires data, and reducing the size of the tubing and the detector cell. For an example of how such instrument modifications affect the performance of superficially porous particle columns of various dimensions, see the article by A.J. Alexander et al. (J Chromatogr A, 1218:5456-69, 2011).

Cost: The cost of these columns varies with the size of the column and the particles’ surface chemistry, and ranges from a few hundred dollars to a few thousand dollars.

Correction: The caption "Flexing Flax Data" has been changed to reflect the correct identity of the person in the photograph.  The Scientist regrets the error.