To study the sense of smell is to sign on for a challenge. The olfactory bulbs comprise an elaborate network of cell types and connections, and olfaction begins with input from odor receptors expressed by sensory neurons in the nose: about 400 different receptor types in humans, 1,000 in mice. Each receptor can typically respond to several different odorants. Compared to the visual system, which has just three color receptors—for red, green, and blue—olfaction is complex.

Furthermore, the stimuli themselves are complex. A seemingly simple aroma like fresh strawberry may comprise multiple odorants, each activating different receptors. And should you waft the enticing scent under the nose of a mouse, how do you control precisely when it inhales those odor molecules, and when the neural receptors are activated? “It’s a notorious problem to control stimulus for the olfactory system,” says Rainer Friedrich, a professor at the Friedrich...

OLFACTION IN ACTION: In this experimental setup pressure changes (P) during sniffing are measured via a pressure cannula (PC) inserted into one nostril. An optical fiber activated by laser light inserted through a separate cannula (OFC) into the other nostril stimulates the mouse’s optogenetically modified olfactory sensory neurons. The mouse is trained to expect a water reward at specific times during inhalation after light stimulation. COURTESY OF DMITRY RINBERG, NATURE, 479:397–400, 2011

Enter the modern technique of optogenetics, in which researchers genetically outfit cells of interest with light-sensitive molecules. In neuroscience, channelrhodopsin—an ion channel from a green alga—is a popular choice. When hit with blue light, the channel opens up. This depolarizes the neural membrane, creating an action potential. In essence, the light stimulates the neuron to fire.

The technique finally gives scientists some of the control they need to scrutinize the smell system, using light to activate olfactory receptor neurons, or cells further on in the smell-processing pipeline, at an exact time. They have also developed ways to precisely dictate where the stimulatory light lands in the olfactory bulb, isolating the neurons of interest while leaving others unstimulated.

In some of the first studies uniting optogenetics and olfaction, scientists have begun to probe how the brain recognizes smells; how it distinguishes odors based on the time they hit the nose or the synchronicity of the nerves firing; and how animals make decisions based on odors they sense. Here, The Scientist profiles three experimental systems where optogenetics has lit the way.

Question: The timing of a mouse’s inhalations and exhalations affects the precise moment when a new odor reaches its olfactory receptor neurons. That is, the animal will notice a novel smell presented at the start of an inhalation faster than one presented at the start of exhalation. But can a mouse distinguish when, in its inhale/exhale cycle, an odor first hits those receptors?

Light Sensor: Collaborator Thomas Bozza, at Northwestern University, engineered mice to express channelrhodopsin in every olfactory receptor neuron. Exposure to blue light will activate all the receptors. Rinberg has no idea what sensation this overall receptor activation produces in the mice, though he jokes, “Probably it stinks.”

Method: To activate a mouse’s odor receptors, the researchers placed an optical fiber into one nostril. They fed the stimulatory blue light—laser or LED will work—into that fiber to activate the neurons. Into the other nostril, the team placed a pressure cannula to follow the animal’s inhale/exhale cycle. The intranasal air pressure dropped as the mouse inhaled, and rose as it exhaled.

Then, the team needed a way to tell when the mouse noticed a smell. They trained each animal to lick for a drop of water in front of its nose when an odorant wafted its way. The mouse’s tongue would break a beam of light set up across the opening of the water tube, allowing the scientists to record just when the mouse licked, indicating it had smelled something. The team then substituted blue light, via the optical fiber entering the nose, for an odor and turned on the light at different times in the inhale/exhale cycle, as determined by the pressure cannula. Then, they trained the mice to only expect water for a blue light provided during inhalation, and thus only lick under those conditions, ignoring blue light input during exhalation.

Result: Not only did the mice readily differentiate stimulatory light provided during inhale versus exhale, they could be trained to distinguish signals provided just 10 milliseconds earlier or later during the cycle, which averages 300 ms total (Nature, 479:397-400, 2011). This means any experimenter who provides smells at a specific time should be aware that the mouse’s inhale/exhale cycle might affect that timing. In nature, noticing the timing of an odor’s appearance might help animals to sense if it’s in high or low concentration, or to localize the source, though this hypothesis is unproven.

Con: Critics note that because it uses light instead of real odors, the system is highly artificial and may not activate odor processing in the same manner.

Equipment: The lab group built the setup themselves, with an apparatus to fix the mouse’s head near the pressure cannula, fiber optic, and water bottle. It wasn’t difficult, says Rinberg, but he was unable to estimate how much the system cost to create. 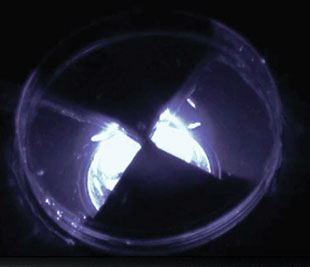 SMELLING THE LIGHT: Drosophila larvae move toward blue light when olfactory sensory neurons that perceive an odor as pleasant are optogenetically stimulated. This noninvasive assay shows that activating the sensory receptor neuron was enough to cause a behavioral response. COURTESY OF KLEMENS STORTKUHLUser: Klemens Störtkuhl, Professor, Ruhr-University of Bochum, Germany

Question: Störtkuhl studies smell in Drosophila. The larvae are attracted to many odors, such as the marzipan smell of benzaldehyde present in the rotting fruit they eat. They are also repelled by a few scents, such as the glue-like smell of octyl acetate. How does the fly larva brain decide whether to crawl toward or away from a particular smell? Störtkuhl and colleagues suspected the response would be hardwired into the individual neurons that sense each odor, rather than learned by the brain. If this hypothesis is correct, then the decision to go forward or back is essentially made as soon as an odorant hits its receptor.

Light Sensor: Drosophila larvae have 28 neurons on each side of their olfactory dome organ, located right at the front tip of the body, and each one expresses a different odor receptor. The researchers engineered several lines of flies to express light sensors in only one receptor neuron at a time. They first used channelrhodopsin. It worked, but the signaling requires a cofactor, retinal. Drosophila do not make retinal on their own, as many mammals do, and the larvae were disinclined to eat the unpleasant-tasting stuff. So the team switched to a photoactivated adenylyl cyclase, PACa, another blue light-sensitive protein from a simple eukaryote. When stimulated, it activates the production of cyclic AMP, a messenger molecule that opens membrane ion channels and activates neurons.

Method: The researchers tested whether each fly line was attracted to or repelled by a blue light that stimulated the receptor neuron containing the transgene. They placed flies in the center of petri dishes positioned over a blue light. A paper mask blocked the light from two of the four quadrants of the dish. Then, the team simply counted how many larvae crawled into the blue sections, compared to the dark ones (Front Neurosci, 5:72, 2011).

Result: Despite being averse to light under normal circumstances, most of the fly lines were attracted to the blue light. But those expressing light-activated sensors in two particular odor neurons, which presumably respond to unappealing odors, avoided it (Front Behav Neurosci, 4:27, 2010). This indicated to Störtkuhl that activating the receptor neuron was enough to cause the behavioral response. The same hardwiring may occur in people, he suggested. For example, the scent of lemons is known to enhance calm and concentration, and that response might be hard to override or unlearn, he posits.

Equipment: The behavioral assay is simple to set up, requiring easily obtained items such as a blue LED light, petri dishes, and paper to make the light-blocking mask. Störtkuhl estimates a cost of $300–$500 to get up and running. 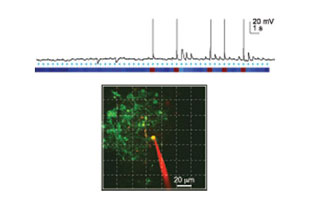 Question: Friedrich is interested in how zebrafish brains decode incoming odor signals. The input from the olfactory bulb to the dorsal telencephalon, the fish’s olfactory cortex, consists of nerve impulses that are either synchronous—with all mitral cells firing at the same time—or asynchronous. Synchronized spikes tend to convey the general category of an odor, like fruity or fishy. The asynchronous patterns communicate more specific odor identities, like lemon or lime. Does the dorsal telencephalon distinguish synchronous from asynchronous inputs and decode them?

Method: The researchers dissected out the brain and nose of the fish to produce an ex vivo preparation that is viable for 8 hours at room temperature. To project odor-mimicking patterns onto the glomeruli, they used a digital micromirror device (DMD). This chip, with an array of 768 x 1,024 or more mirrors, works the same way as the chip in a digital projector. When a micromirror is slanted toward the fish brain, it sends light to the corresponding spot. When the mirror is slanted away, that part of the brain remains darkened. Using a series of images of light and dark squares as their input, the researchers could activate different regions of the glomeruli in synchronized or asynchronized patterns (Nat Protocols, 7:1410-25, 2012). These patterns do not exactly reflect any particular smell, but they are similar to the patterns of real smells. Then, the team used patch clamping to measure the signaling going on downstream in the dorsal telencephalon.

Result: Friedrich hypothesized that synchronous signals would result in more action potentials in the cortex, because neurons tend to have a stronger response to synchronized input. To his surprise, the dorsal telencephalon did not differentiate between synchronous and asynchronous patterns, suggesting that the cortex is deciphering specific smells, not general categories of odors (Nature, 479:493-98, 2011). That does not mean that the synchrony of signals goes unnoticed by the entire brain, however. Friedrich’s team found preliminary evidence that there is another area, which they have not yet characterized, that does distinguish synchrony.

Con: At the moment, there are not good behavioral assays for fish, as there are for other organisms, Friedrich says.

Equipment: Texas Instruments of Dallas makes DMDs, which are marketed by authorized distributors. The most inexpensive way to get one is to buy a digital projector, but these chips may not have the high frame rate (1 kiloHertz or greater) needed to precisely manipulate neurons at the natural speed, Friedrich says. You can get a more advanced version in a developer’s kit from companies such as Wintech Digital Systems Technology of Anaheim, California (www.wintechdigital.com; LightCrafter 4500 costs $1,299), Digital Light Innovations of Austin, Texas (www.dlinnovations.com; DLi4100 entry-level package costs $7,999), or Vialux Messtechnik of Chemnitz, Germany (www.vialux.de; DLP 4100 V-module costs $9,550). You’ll also need an LED or laser light source, and mirrors and lenses to mount the DMD to your microscope. 