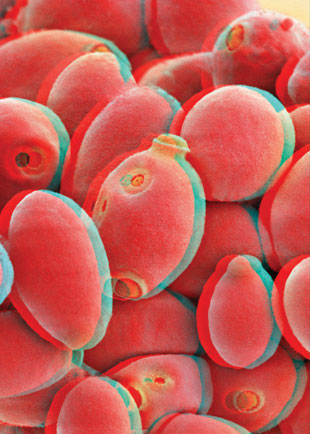 © THOMAS DEERINCK, NCMIR/SCIENCE SOURCEFluorescent dyes and genetic tags have revolutionized researchers’ ability to determine the location of specific proteins in space and time using light microscopy (LM). With the advent of super-resolution fluorescence LM techniques, much more precise location of proteins within a cell is possible, but those techniques do not provide information about the ultrastructural cellular context of biomolecules. Electron microscopy (EM) is an unbeatable tool for providing structural data at the nanometer scale, but the field of view in EM is very narrow and the molecular scenery is highly crowded, making it tedious and time-consuming to locate specific structures and cellular events, especially if they are rare. Moreover, EM can only provide a static snapshot of the sample because cells and tissues must be fixed prior to imaging.

Recently, researchers have developed methods that allow both light- and electron-microscopic examination of the same specimen, an...

One of the primary challenges in CLEM, however, is locating the same area that was imaged using LM, says Chris Arthur, a senior research scientist at FEI Company in Hillsboro, Oregon, which manufacturers several different tools for CLEM. Even as researchers manage to home in on the region of interest, it can be difficult to accurately overlay the two types of images, due to distortions caused by the different types of imaging systems and sample preparation methods.

Researchers have begun to develop techniques that help overcome these challenges. Here, The Scientist looks at three recent approaches. 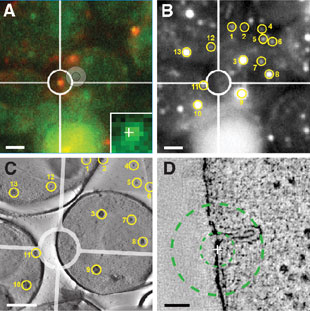 BEAD SPOTTING: Fiducial markers can be used to line up light and electron microscope (EM) images of a sample region. A fluorescently labeled protein marks an area on a yeast cell membrane (A, white circle). The pattern and positions of the fiducial markers, blue fluorescent beads deposited on the surface of the sample, are marked (B). Bead patterns are located at low magnification in the EM, and the location of the region of interest (white circle) is calculated using the coordinates of the fiducials (C). Higher magnification reveals an endocytic vesicle on the yeast cell membrane (D).COURTESY OF WANDA KUKULSKI, © 2011 KUKULSKI ET AL. JOURNAL OF CELL BIOLOGY. 192:111-119. doi:10.1083/jcb.201009037 After labeling their proteins of interest using genetically encoded fluorescent tags such as green fluorescent protein, the group froze the sample, embedded it in a plastic resin, and collected thin sections on an EM grid—a solid support analogous to a glass slide for light microscopy. The grid pattern, visible in both microscopes, aids in locating the region of interest, much like the grid lines on a map. Before imaging, they deposited a suspension of blue fluorescent beads (FluoSpheres from Molecular Probes) onto the surface of the specimen to act as fiducial markers. Once the beads settled, the researchers imaged the sample by fluorescence microscopy, identifying a particular region of interest and recording the coordinates both of the fluorescently labeled proteins and the beads in the same field of view. With the help of the EM grid, the researchers then navigated to the region of interest and collected low-magnification EM images, recording the coordinates of the beads. Then they used the program MATLAB to relate the coordinates of the beads in the fluorescence and electron microscopy images and to calculate the EM coordinates of the specific proteins of interest. Finally, they navigated to those coordinates and collected high-resolution EM images of the region.

Application: By fluorescently labeling proteins involved in endocytosis in yeast, Kukulski and colleagues were able to collect high-resolution images of endocytic vesicles in the process of pinching off from the plasma membrane—a short-lived phenomenon that has been difficult to identify using EM only (J Cell Biol, 192:111-19, 2011).

Cons:
• Fiducials may sometimes obscure a potential region of interest.
• The procedure is laborious and time-consuming.

Tips: Kukulski recommends prewashing the fluorescent beads in a 0.1 percent solution of the detergent Tween 20 to reduce the beads’ fluorescence intensity (and the chance that their signal will “bleed” over into other fluorescent channels), and to increase their adherence to the sample. She also says that the fluorescently labeled proteins of interest should be imaged prior to imaging the fiducials, to prevent photobleaching those proteins.

Technology: As a postdoctoral fellow in the laboratory of Nobel laureate Roger Tsien at the University of California, San Diego, and in collaboration with Mark Ellisman, director of the National Center for Microscopy and Imaging Research, Xiaokun Shu helped to develop a genetically encoded tag for proteins that is visible by both light and electron microscopy. 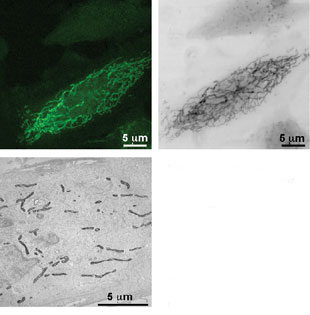 TARGETED LABELING: Light microscope images show mitochondria tagged with the fluorescent, genetically encoded miniSOG label before (top left) and after (top right) photooxidation. Reactive oxygen species generated by miniSOG initiate a staining process in the region of the label that allows localization for study by electron microscopy (bottom).PLoS BIOL 9(4): e1001041The group created the tag, which they dubbed “miniSOG” (for mini singlet oxygen generator), from a naturally fluorescent fragment of the Arabidopsis protein phototropin 2. They engineered the tag to generate large amounts of reactive oxygen species upon illumination and to enhance its fluorescence. (See “Deep Tissue Treatment,” The Scientist, September 2011.) The tag can be cloned onto virtually any protein and expressed in cells or even animals. Prior to EM imaging, samples containing miniSOG–tagged proteins of interest are infused with the compound diaminobenzidine (DAB), which becomes polymerized by the reactive oxygen species that are generated when miniSOG is excited by light. These polymers form within approximately 5?nm of the tagged protein of interest and have a high affinity for the heavy metal osmium, which can be used to stain the specimens to make the location of the protein of interest visible by EM. Furthermore, photo-oxidized DAB is a light-brown color, which can be used as an aid to locate the region of interest in the sample. The technique essentially “paints” the molecule that has been tagged with miniSOG, Ellisman says.

Application: Using miniSOG, the group generated CLEM images for several proteins that localize to different subcellular compartments, including the cytoskeleton, endoplasmic reticulum, and mitochondria (PLOS Biol, 9:e1001041, 2011). After verifying that the tag did not interfere with the localization of the proteins in cultured cells, the authors fixed their samples and imaged them with a fluorescence microscope to identify regions of interest for CLEM. Then they incubated the specimens with DAB, and illuminated the regions of interest with blue light using a microscope objective. Once the brown reaction product began to appear, the researchers performed a routine osmium-stain preparation before EM imaging.

Pros:
• The technique is generally applicable to many different proteins.
• It efficiently generates reactive oxygen species that result in a strong EM signal.
• The tag comprises 106 amino acids, which is smaller than conventional fluorescent proteins
and therefore less likely to interfere with the function of the protein of interest.
• Because the tag is genetically encoded, researchers don’t need to use conventional immunostaining
techniques that can compromise the ultrastructure of the specimen.

Tips: Because the photo-oxidation reaction requires oxygen, Shu recommends blowing a stream of pure oxygen over the sample to ensure maximal singlet oxygen generation. Furthermore, the sample should be chilled to near 0 °C during the procedure to minimize diffusion of the DAB precipitate. Because light with a wavelength shorter than the blue light used to excite the fluorophore can cause nonspecific polymerization of DAB, Ellisman recommends illuminating the samples using a xenon light source rather than a mercury lamp.

Technology: In collaboration with Jeff Lichtman’s group at Harvard, Glenn and colleagues developed a CLEM imaging technique that enables simultaneous acquisition of light and electron images using a single instrument, thereby eliminating the problems of relocation and alignment.

Application: Glenn and colleagues report that their light and electron microscope images of the nanoparticles corresponded very well, although some of the smallest nanodiamonds were not visible using cathodoluminescence (Sci Rep, 2:865, 2012). Furthermore, they successfully conjugated antibodies to the nanodiamonds and found that the cathodoluminescent properties of the particles were unaffected by the modification, providing a proof-of-principle for future biological applications, such as immunostaining specific proteins or other structural targets in cells or tissues with cathodoluminescent nanodiamond labels.

Pros:
• There is no need for sample transfer between microscopes—both types of imaging can be
done at the same time.
• Whereas the electron-scattering probes traditionally used for electron microscopy require
high-resolution imaging to identify, the cathodoluminescence signal from nanodiamonds can be
readily identified at low and high resolutions, making it easier to search for regions of interest.
• Nanodiamonds that cathodoluminesce at different wavelengths could be used to image several different
molecular targets in the same sample.

Cons:
• The method requires a cathodoluminescence detection system, which can be expensive.
Glenn and colleagues used a detector made by Deben UK Ltd that they purchased for approximately
8,000 British pounds (roughly US $12,800 as of September 2013).
• Antibody-conjugated nanodiamonds are not commercially available, so users will need to carry
out the surface modification of the nanodiamonds themselves.
• Imaging resolution is limited by the size of the nanodiamonds (approximately 40–80 nm),
which are about 10 times as large as the antibody-conjugated gold nanoparticles
that have conventionally been used to visualize specific proteins with electron microscopy.

Tips: Glenn says that the spectrum of cathodoluminescence emitted by the nanodiamonds can be expanded by incorporating various impurities and defects into the nanodiamonds, or by imaging at cryogenic temperatures. He also cautions that it may be challenging to label tissues with nanodiamonds because the diamonds diffuse slowly due to their relatively large size. 