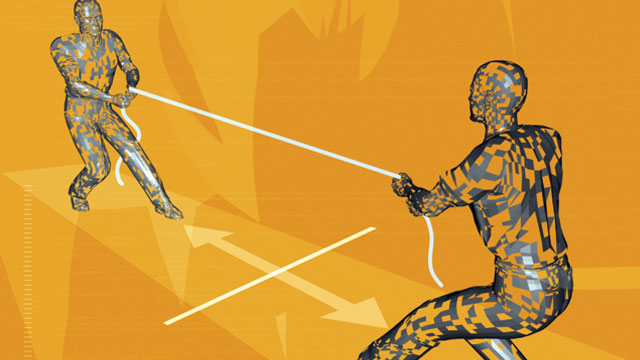 At the cellular level, physical stress is ever-present and inescapable. Whether externally applied, as when bodies move, bend, and stretch, or internally generated by the cytoskeleton as cells change position, mechanical forces trigger changes in intracellular biochemical signaling and gene expression, influencing processes such as migration, proliferation, differentiation, and apoptosis. For instance, stem cells have been shown to differentiate into different cell types depending on the stiffness of the matrix on which they are grown.

Force is increasingly recognized to play a vital role in regulating cell behavior and function, and researchers are beginning to elucidate the mechanisms by which cells sense and generate mechanical forces and translate them into biochemical signals—a process known as mechanotransduction. In the past few years, a number of techniques have cropped up to examine how such forces regulate biochemical signals and thus, ultimately, cell function, but many of these... 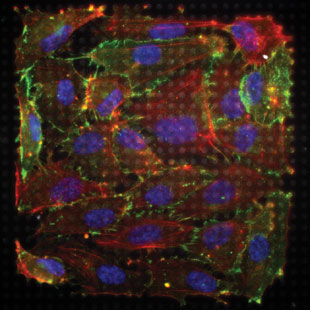 Technology: Sniadecki employed a tool known as a micropost array, which was invented by his postdoctoral mentor, Christopher Chen, a professor of bioengineering at the University of Pennsylvania (Nature Methods, 7:733-36, 2010). It consists of a series of closely spaced vertical silicone posts. Extracellular matrix proteins are affixed to the tips of the posts, enabling cells to adhere. As the cells attach and spread across multiple posts, they bend the posts in proportion to the traction force they apply. Researchers track the deflection of the posts by light microscopy and calculate traction forces by multiplying the distance each post moved by its spring constant.

Application: Sniadecki’s team cultured endothelial cells in a monolayer on micropost arrays housed inside a custom-built microfluidics-based flow chamber in which culture media flowed unidirectionally across the cells. The researchers placed a small obstacle at the fluid entrance to the chamber, generating a region of recirculation immediately downstream; cells in this zone experienced disturbed flow. The flow stabilized further downstream in the chamber, and in that region, cells experienced laminar flow. Using this system, Sniadecki was able to calculate the average traction force per post for the entire monolayer and use the vector sum of traction forces for a given cell to determine the net intercellular force acting on it by all of its neighbors. He found that cells subjected to laminar flow generated larger traction forces, formed more cell-cell junctions, and were tugged on more tightly by their neighbors compared with cells that experienced disturbed flow (Am J Physiol Heart Circ Physiol, 302:H2220-29, 2012). “It shows that there’s a biomechanical role for why you see vascular leakage in regions of disturbed flow, because the cells are not pulling as tightly against each other,” Sniadecki says.

Technology: To circumvent this problem, Schwartz used a genetically encoded “tension sensor” that enabled him to visualize where and when proteins are under tension inside the cell and to measure the forces those proteins sustain. Schwartz’s tension sensor, originally created in his lab to measure forces across the focal adhesion protein vinculin (Nature, 466:263-66, 2010), is composed of a short, elastic peptide from spider silk flanked by a pair of fluorescent proteins. When the fluorophores are in proximity to each other, they undergo FRET, or fluorescence resonance energy transfer, whereby the light emitted by one fluorophore is absorbed and emitted at a different wavelength by the other. Once the sensor has been inserted into the target protein, researchers can investigate forces exerted across that protein by analyzing changes in FRET, which is highly dependent on the distance between the fluorophores. In the absence of tension, the spider silk domain collapses to bring the fluorophores close together to generate a FRET signal, whereas tension stretches the spider silk protein like a spring, pulling the fluorophores away from each other and decreasing FRET. Working in vitro, Schwartz generated a calibration curve linking FRET efficiency to force, enabling him to precisely calculate the amount of tension experienced by sensor proteins in living cells.

Application: By engineering endothelial cells to express modified versions of VE-cadherin and PECAM-1 that contain the tension sensor within their cytoplasmic domains, Schwartz showed that fluid flow across the cells triggered an increase in tension across PECAM-1, but caused a decrease in tension across VE-cadherin. “We discovered that [cellular sensing of shear stress] is not a passive process where the cell is being dragged by the force and some of that force is transmitted to the junctions,” says Schwartz. Instead, force triggers a rearrangement of the cytoskeleton and the formation of new connections that alter the forces on the junctional proteins. 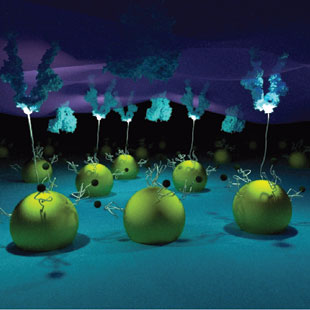 INFORMATION GOLD MINE: Gold nanoparticles (yellow spheres) immobilized on a glass slide (bottom) and attached to a polymer “string” and a fluorophore (black dots) sense changes in tension of a cell (purple) when receptors on the cell’s surface (blue) pull on the polymer and activate the fluorophore.ILLUSTRATION CREATED BY DANIEL STABLEYUser: Khalid Salaita, Assistant Professor of Chemistry, Emory University

Project: Visualize and measure the forces sustained by the plasma membrane-spanning proteins called integrin receptors, which anchor cells to the extracellular matrix during cell adhesion

Problem: Salaita wanted to measure the low pN-scale forces thought to drive the conformational changes in the hundreds or thousands of integrin receptors located across the cell membrane. However, existing tools to measure forces at specific sites on the cell surface can only probe a single molecule at a time. Because integrins work in clusters to form cell adhesions, single-molecule methods may not represent the actual forces integrins experience in a functional cell adhesion.

Technology: To measure extracellular forces, Salaita developed a fluorescence-based tension sensor that’s conceptually similar to Schwartz’s, except it employs the flexible polymer polyethylene glycol (PEG) as the elastic linker. Also, instead of using fluorescent proteins, Salaita flanked his spring with an organic fluorescent dye at one end and a gold nanoparticle at the other, taking advantage of a phenomenon known as nanometal surface energy transfer (NSET), in which a nanoparticle absorbs and quenches the light emitted by the fluorescent dye. He anchored the nanoparticle end of the spring to a glass surface, and tagged the opposite end with a ligand that specifically binds the integrin receptor.

Application: Salaita plated a monolayer of human breast cancer cells in culture dishes coated with the NSET sensors, and monitored changes in tension using a conventional fluorescence microscope. As the cells made contacts between their integrin receptors and the sensors, they tugged the fluorescent dye away from the nanometal quencher, leading to an increase in fluorescence emission. By calibrating the sensor’s NSET response to applied tension in vitro, Salaita was able to calculate the amount of tension sustained by the receptors in vivo. Previous researchers had estimated that each integrin molecule experiences 1–2 pNs of tension, Salaita says, “but when we went ahead and measured it, it turned out that some of these receptors get forces as high as 15 pN.”