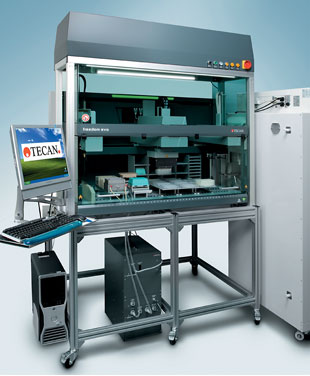 FREEDOM EVO: Tecan’s automated cell culture machine is useful for many routine processes and can be upgraded for use with culture flasks and cell suspensions. COURTESY OF TECAN GROUP LTD.Letting a robotic system do your cell culturing can pay off in more ways than just sparing you carpal tunnel. If you have to produce a large number of cells for high-throughput cell-based assays, it can free up hours of time, depending on how many people in your lab do manual cell culture. “If each person in your group has more than two or three cell types to culture, or if you have to feed [or replace the media on] cells frequently, especially on weekends, you should look into automation,” says Robin Felder of the University of Virginia School of Medicine in Charlottesville, cofounder of Global Cell Solutions, a company that sells cell-culture products.

A fully automated system can handle all the tasks involved in culturing adherent cells, which grow by attaching to the bottom of a cell culture vessel. These tasks include feeding the cells, replacing old growth media with fresh media, and passing the cells. The most delicate of the common tasks, passing, requires detaching a confluent cell layer from the vessel, using an enzyme that breaks up the cells’ attachment proteins. The now suspended cells are then easily transferred into a larger vessel or multiple vessels so they continue to proliferate.

Some automated systems can also work with cells that grow in suspension, such as blood cells. These cells present the challenge of needing constant movement or shaking to grow, and passing the cells can require centrifugation to separate the cells from the old media.

The cost and complexity of fully automated systems can be barriers for researchers used to manual cell culturing, says Felder, who consults for research groups interested in robotic cell-culture platforms. Ready-to-go systems cost hundreds of thousands of dollars, and, as Felder points out, are not always “ready-to-go,” because of the time needed to learn the machine’s software.

Felder recommends starting with small semiautomated components, which some companies sell à la carte, and scaling up, depending on the lab’s needs. For example, a robotic pipetting device that can feed cells and do other tasks, such as adding reagents, costs no more than many standard lab instruments, he says.

But automated systems differ from the loving touch of manual cell culture in several ways, says Thorsten Gorba, the director of CNS Assays at StemCells Inc., a Newark, California, company that develops stem cell applications and cell-culturing protocols. They can take longer to feed and passage cells and use more diluted enzyme or dissociation buffers to detach the cells. Gorba suggests learning the details of the automated system you’re interested in and manually mimicking its culturing conditions to make sure your cells still grow well, before taking the plunge and ordering a system.

The Scientist spoke with the makers and users of some of the top automated cell culture instruments on the market to get the skinny on what they offer and just how much they can do.

The centerpiece of the Freedom EVO line is a pipetting robotic arm around which researchers can design a custom automated cell-culturing instrument. For full automation, users can add robotic arms to move vessels between the hood and incubators.

The pipetting robotic arm can be outfitted with adapters that fit different numbers of pipette tips, which aspirate and dispense liquid to seed, feed, or pass adherent cells into fresh multiwell plates. The system can also be modified to work with flasks for feeding and passing larger numbers of cells, using a device called a flask flipper that moves flasks into an upright position so that pipettes attached to the robotic arm can access the flasks to aspirate and dispense liquid.

Pros: Users have a choice of two systems that can be housed within the Freedom EVO hood for handling liquid. The first system, in which the pipetting robot arm aspirates and dispenses liquid, is useful for feeding and passing cells in multiwell plates and for adding small volumes of reagent for assays to all or a subset of wells. The robot arm can accurately dispense volumes as small as half a microliter, says Kevin Moore, head of applications and solutions at Tecan. The other system is a bulk liquid-dispensing unit that pumps media from a fridge through sterile tubing into a liquid dispenser located in the hood where it is first warmed—ideal for working with large volumes of media, Moore says.

Cons: The Freedom EVO is compatible with only a few types of specialty robotics-ready flasks. Although the Freedom line can handle cells in suspension, it is advisable to buy a separate EVO 150 hood for this task, Moore says. Suspended cells must be transferred from the hood to a centrifuge below, which requires a larger hood that can accommodate a longer robotic arm to perform this transfer.

Extras: Additional adapters for pipetting into 96- and 384-well plates for high-throughput cell feeding and passing; stirring platform for growing cells in suspension; heated shaking platform to help adherent cells treated with enzymes detach from the vessel for passing; Cellavista (sold through SynenTec) to image plates during cell growth and monitor fluorescent gene expression; and Cedex to count cells and check their viability (sold through Roche) 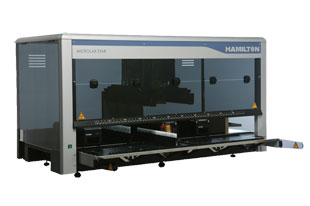 STAR: Hamilton’s pipetting system is designed for feeding and passing adherent cells in multiwell plates. It can also house its own incubator, outfitted with a shaker for suspension cells.COURTESY OF HAMILTON® ROBOTICSLike the Freedom EVO systems, Hamilton’s STAR system is based on a pipetting robot that researchers can build upon using a Hamilton tissue culture hood and robotics to move vessels between the hood and incubator. (Researchers must buy the incubator from another company.) The STAR pipetting robot is designed to feed and passage adherent cells grown in multiwell plates, as well as to take on specialized jobs like adding reagents to a subset of wells for an assay. “Automation is most amenable for the very tedious tasks in dense plates, like 96- and 384-well plates,” says David Shaw, from Genentech’s Pharma Technical Development Division.

Pros: Researchers can grow either adherent cells in wells or cells in suspension, using a small cell-culture incubator add-on that fits inside the STAR hood called the BioLevitator, which can shake suspension cells in four 50-mL tubes during their growth phase. Magnetic microcarrier beads, sold by Global Cell Solutions, added to the tubes “trick” cells that are normally adherent into effectively growing in suspension by adhering to the beads. This format makes better use of real estate in adherent-cell culture: one 50-mL tube of beads can support the growth of 5 to 10 times as many cells as a medium-sized (T75) flask, says Uday Gupta, president and CEO of Global Cell Solutions.

Cons: The STAR pipetting robot, which has between one and 16 channels and attachments for pipetting into 96- and 384-multiwell plates, is the system’s only option for dispensing liquid. It does not have a system for bulk liquid distribution, and as a result, it can’t dispense more than five milliliters at a time, which can slow down cell feeding and passing. The STAR pipetting robot also requires special Hamilton tips.

Although the STAR system can handle automation-friendly flasks, it cannot tilt and turn flasks upright, for better media removal, or tap the flasks to help detach cells for passing. Users must custom-order robotic parts from Hamilton to perform these tasks. Instead of relying on the system to handle flasks, Shaw’s group manually grows up large cultures in flasks, and when ready, puts the suspended detached cells in troughs inside the STAR system for dispensing into 384-well plates.

Extras: Heated shaking platform can be added to help adherent cells treated with enzymes detach from the vessel for passing. Software called “AutoPilot” developed by Telos Scientific simplifies the software for running the STAR system, which can be difficult to set up, says Paul Bushway, a scientist in Sanford-Burnham Medical Research Institute’s Muscle Development and Regeneration Program.

Price: Ranges from $50,000 for a pipetting robotic arm to $750,000–$1,000,000 for a completely automated system, which involves several robots and instruments such as incubators from other companies; BioLevitator costs $35,000 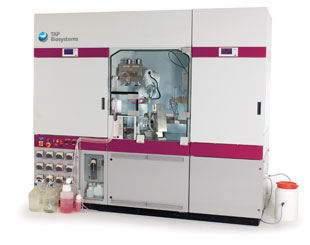 COMPACT SELECT: This instrument from Tap Biosystems processes cells in the same type of flasks researchers uses for culturing stem cells in bulk.COURTESY OF TAP BIOSYSTEMSThe CompacT SelecT is an all-in-one system that includes the hood, robotics, incubator, and software for growing adherent cells. Unlike other cell-culturing systems, it was designed to process cells in the same type of flasks—T75 and T175—that researchers use to manually grow cells in bulk.

It is the only automated game in town for growing the billions of stem cells needed for differentiation into enough specialized cells for large drug screenings or for eventual clinical use, says Gorba, of StemCells, Inc. in California. Making billions of stem cells manually takes about 100 T175 flasks and is a full-time job for at least one lab member.

PROS: The robotic arm, which transfers flasks between the incubator and the liquid dispenser and other devices in the hood, has six joints that mimic the movements of a human shoulder, elbow, and wrist. It excels at steps like swirling flasks to ensure even distribution of cells, media, and reagents, says Dave Thomas, a product manager at TAP Biosystems. “It is a very similar process to what we do manually in a cell culture hood,” says Loughborough University’s Rob Thomas (no relation to Dave Thomas), who has collaborated with TAP to help develop protocols and equipment. The system also offers two liquid dispensing modes, similar to the Tecan Freedom EVO line.

CONS: Although the CompacT SelecT can also handle cells in multiwell plates, this capability requires an extension, called the Advanced Plating Module, which has its own robotics and incubator for plates, and adds nearly 3 feet to the 6-foot-long CompacT SelecT system.

Manually passing adherent cells sometimes requires spinning down the cells to separate them from the dissociation enzyme, which is especially important when growing stem cells, says Gorba. However the CompacT SelecT is not designed to work with a centrifuge.

EXTRAS: Low-volume dispenser for addition of reagents such as growth factors or transfection reagents; Gorba suggests the IncuCyte live-cell imaging system sold by Essen BioScience, which he says is useful for monitoring cell confluence and automatically initiating passage of stem cells in order to maintain the monolayer in an undifferentiated state.