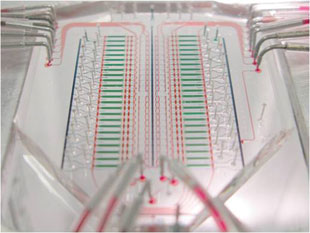 SINGLE-ROOM OCCUPANCY: This 48-well microfluidic chip for single-cell genomics consists of a layer of “control” lines (red) that actuate “gates” in the flow channels (blue and red) to position cells in individual chambers for lysis and DNA amplification (green).COURTESY OF BRIAN HEDLUNDMicrofluidics, the science of moving and manipulating nanoliter or microliter volumes through micron-scale channels, is playing an increasingly outsize role in the life sciences. For some researchers, microfluidics holds the key to low-cost diagnostics. Others use the technology to evaluate the quality of nucleic acid preparations or to drive targeted DNA sequencing. But for an ever-larger pool of researchers, microfluidics offers a way to reduce biology to a fundamental unit, the cell.

“The scale is the right match,” explains David Weitz, professor of physics and applied physics at Harvard University. “Microfluidic chips are meant to manipulate cubic microns of fluid, and a cell is some number...

Some researchers use those chips to study cell behavior; others are interested in the macromolecular composition of the cells themselves. In either case, the technology is relatively straightforward. Yet many nonexperts can be intimidated by microfluidics, says Weitz, and some new equipment may well be required. For many, it’s probably easier to collaborate with an expert.

Still, if you’re game to try, the advantages of microfluidics could well outweigh the growing pains and expense. The Scientist asked four researchers about their strategies for taking biology to the single-cell level. This is what they said.

PROBLEM: Many bacteria cannot be cultured, complicating analysis. A group of mysterious microbes called OP9 falls into that category.

SOLUTION: First discovered in a Yellowstone National Park hot spring, OP9 is a large and diverse collection of uncultivable microbes, heretofore known only by their ribosomal RNA. Hedlund refers to such bacteria as “microbial dark matter,” and to unlock their secrets he has turned to microfluidics.

Using a circuit designed in the lab of microfluidics pioneer and entrepreneur Stephen Quake of Stanford University, Hedlund and his team isolated, lysed, and amplified the genomes of 21 individual OP9 cells from a California hot spring, 15 of which they sequenced (Nat Commun, 4:1854, 2013).

Fabricated at Stanford from a transparent, spongy, Jell-O–like material called polydimethylsiloxane (PDMS), the chip is “probably two postage stamps in size,” Hedlund says, and comprises a series of channels, branching off two central pipes, that lead to 48 distinct reaction chambers. To isolate the cells, Hedlund’s postdoc Jeremy Dodsworth injected a bacterial mixture onto the chip, placed the chip under a microscope, and used a laser (an “optical trap”) to physically drag one OP9 cell into each individual chamber.

Dodsworth then engaged the fluidics to lyse the cells and amplify their genomic DNA, creating 48 distinct sequencing libraries. “We get 10–20 percent success,” Hedlund estimates. “If we sort 48 cells, we’ll get seven or 10 successful genomes.”

CONSIDERATIONS: Hedlund’s approach is far slower than fluorescence-activated cell sorting (FACS), an alternative strategy for collecting single cells. On average, Dodsworth says, it took five to seven minutes to move one cell to its chamber, for a throughput of maybe 12 cells per hour—but the microfluidic approach also is less prone to contamination, Hedlund says. That said, Dodsworth was only able to identify and grab the cells he wanted because the OP9 cells were morphologically distinct rods in a low-diversity sample in which such cells were relatively rare, a feature unlikely to extend to other environments.

COST: The approach requires an inverted microscope and a laser trapping system, pneumatic controls, plus a dedicated computer and control software. The microfluidic chips, from the Stanford Microfluidics Foundry, cost about $100 each, and Hedlund estimates a complete system could be built for about $35,000, including $25,000 for the microscope and a few thousand dollars for the laser.

NOT JUST THE FACS 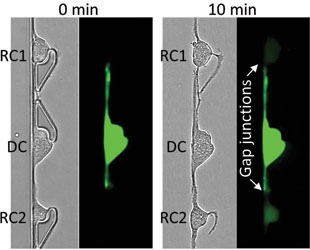 INSPIRED BY ART: Single NIH 3T3 fibroblasts with the cell dye calcein AM (donor cell, DC) and without calcein AM (recipient cell, RC) were printed onto a polystyrene petri dish using the Block-Cell-Printing method. Dye transfer from the donor cells to the recipient cells via gap junctions is visible after 10 minutes of intercellular communication.KAI ZHANG AND LIDONG QINRESEARCHER: David Weitz, Professor of Physics and Applied Physics, Department of Physics and School of Engineering and Applied Sciences, Harvard University

PROBLEM: Because FACS mixes cells together into a homogeneous solution, the technique can only distinguish cells that differ in intracellular or surface-associated fluorescence. Cells that differ in protein secretion cannot be separated.

SOLUTION: Weitz is a pioneer in the development of droplet-based microfluidics, a strategy that creates a uniform emulsion of aqueous droplets in oil such that each droplet is effectively an independent, picoliter-size reaction vessel. He has cofounded several companies based on the technology, including RainDance Technologies and HiFiBiO.

With collaborator John Heyman, Weitz used droplet-based microfluidics to develop a PDMS-based FACS machine, in which each droplet contains a single cell and is sorted based on fluorescence. The system encompasses two microfluidic chips. The first encapsulates cells and reagents in individual droplets (~1,000 droplets/sec), and the second sorts them.

The configuration offers a substantial advantage over traditional FACS, Weitz explains. Because cells are confined in a fixed volume, sorting can be based on criteria that traditional FACS cannot handle. “You no longer are restricted to having your readout attached to the cell. It can just be encapsulated with the cell.”

The system can thus sort based on such features as cell-cell interactions, cell growth, and enzyme efficiency. Here, the team encapsulated hybridoma cells (immortalized B cells used to prepare monoclonal antibodies) with beads and reagents that fluoresce in the presence of an antibody (Nat Protocols, 8:870-91, 2013). That signal triggers an electrical pulse, which sorts the cells, effecting in this case a 220-fold enrichment. Cells sort at 1,000 to 10,000 cells per second, on par with commercial FACS machines, Weitz says, and thresholds can be set to select for only the strongest antibody producers.

CONSIDERATIONS: Picoscale droplets are hard to work with and relatively fragile, so researchers need to ensure they don’t break during manipulation. The microfluidic channels through which they move are also small, meaning broken cells and debris can clog the works, says Heyman. On the other hand, the system allows sorting even of troublesome primary cells, an option that enables direct cloning of antibody genes from positive B cells without hybridoma formation.

COST: HiFiBiO is commercializing a cell-sorting service based on the FACS application, Weitz says, but the easiest option for academics is probably to collaborate with his team. If you want to try it yourself, you’ll need a microscope, laser, pumps, and electric field generators, plus the circuits themselves. Weitz’s “sorting stations” cost about $100,000, but users can probably spend as little as $10,000–$20,000, he estimates.

PROBLEM: Controlling cell-cell interactions means controlling where cells are positioned, something that is impossible in standard tissue-culture systems.

SOLUTION: Qin realized the only way to precisely control cell positioning was to physically place the cells where he wanted them.

Adapting the nearly two-millennia-old technique of woodblock printing, in which a carved relief serves as a template to transfer an image to paper or fabric, Qin and his team developed a microfluidic device to capture cells in desired positions and array them in situ on glass or plastic (PNAS, 111:2948-53, 2014).

Called Block-Cell-Printing (BloC-Printing), the method uses a PDMS device in which the microfluidic channels contain tiny curved hooks to capture cells as they flow past. This chip is stuck to a surface by vacuum and thus can be removed, leaving the cells behind in their arrayed arrangement. A typical 1”≈1” device, Qin says, can position some 50,000 cells approximately 30 micrometers apart.

The team demonstrated a number of applications, including positioning different cells in close proximity to monitor synapse formation, an important mechanism not just in neural transmission but also in immune surveillance. “If you want to have a defined system to study, you need to have defined cell positions and distances,” Qin explains. Other applications include precisely positioning cells on sensor arrays, as well as Qin’s personal focus, cancer metastasis.

In one experiment, Qin’s team arrayed different breast cancer lines and monitored how far they extended their cell membranes—a precursor to cell migration. Extension distance correlated with metastatic potential, Qin says, suggesting the method can be used to measure invasiveness.

CONSIDERATIONS: BloC-Printing seems not to harm the arrayed cells. But the technique can print only a single cell layer, Qin says, meaning 3-D applications, such as tissue-formation assays, are not yet feasible. “Inkjet printing can do [that] very well,” he says.

COST: According to Qin, the technique requires only a chip (which his lab can provide), a syringe, and a petri dish. “We have given this device to several labs and all had good results,” he says. 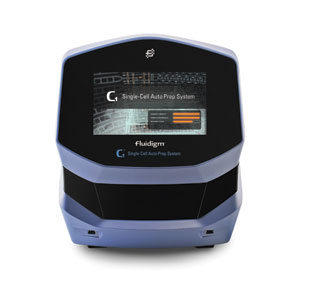 PROBLEM: The gene-expression dynamics of individual cells differ even within a homogeneous population, so a pooled average can mask considerable variation. To see that, you need to profile individual cells.

SOLUTION: Multiple researchers have applied transcriptome analysis (RNA-seq) to single cells. Some use manual picking, others use FACS. Linnarsson and his team used microfluidics.

Employing the commercially available Fluidigm C1 Single-Cell Auto Prep System, the team captured 96 mouse embryonic stem cells in individual chambers on a PDMS microfluidic chip. They then lysed the cells and converted cellular RNAs to cDNA in situ to yield 96 distinct sequencing libraries, which they then eluted off the chip and sequenced (Nat Meth, 11:163-66, 2014).

Linnarsson’s team used a barcoding approach to correct for amplification bias—a perennial problem with single-cell sequencing strategies. But transcriptome recovery was incomplete; Linnarsson estimates they recovered “a bit less than half” (48 percent) the total RNA population from each cell. Still, that’s better than most other single-cell approaches, Linnarsson notes, where recovery is typically 10 percent. RNA likes to stick to surfaces, he explains. “Putting it in a tiny chamber probably helps to increase reaction efficiency and avoid loss.”

Though the work was largely a proof of principle, the data suggest that ESCs resonate between pluripotency and prodifferentiation states. “It’s like they are thinking about differentiating, and then they stop thinking about that and go back to being pluripotent,” Linnarsson explains.

CONSIDERATIONS: One key advantage of the Fluidigm platform was the ability to view the cells prior to data analysis. That enabled Linnarsson’s team to exclude unhealthy cells, something that would have been impossible with FACS sorting. Another benefit: Imaging allows correlation of transcriptome and morphology, an especially powerful validation step for the neural tissues Linnarsson studies. Still, throughput is limiting. Each chip run takes 10–12 hours and captures 96 cells, of which only some may be healthy. “We’re interested in thousands [of cells]. So there’s a huge discrepancy there.”