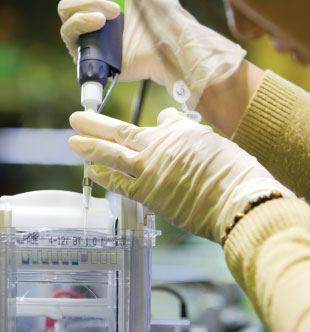 © MARK HARMEL/SCIENCE SOURCEWhen you’re looking at bands on a Western blot, it’s often obvious which lane has a lot of protein or a little. But it’s not always easy to tell with the naked eye precisely how two bands compare. Plus, looks can deceive. For example, if a lane widened or a band developed a “smile” as the gel ran, a protein-heavy band might look faint.

That’s where imaging software can help, by putting numbers on the density of a band. Just draw a box around your band and the program will tell you the pixel density. Some programs do much more, such as quantifying the number of colonies on a petri dish or the intensity of fluorescent signals in a 96-well plate. “It’s just an improvement on the eyeball,” says Jeff Silk, president of Silk Scientific, in Orem, Utah, which sells gel analysis software.

One important factor to consider is what file types the software accepts, says John Wiktorowicz, a professor at the University of Texas Medical Branch at Galveston. Some use a proprietary format linked to the company’s imaging system, while many accept generic formats such as JPEG or BMP. Wiktorowicz, director of proteomics for the biomolecular resource facility at the university, prefers to work with TIFFs. “It leaves the values intact,” he explains. Other formats such as JPEG compress the file size and could result in loss of crucial information. “I would never use JPEGs for any quantitative study,” says Wiktorowicz.

Any imaging software should save raw data files, and record any modifications users make to an image. “When it comes time to publish, you need that information,” says Mark Chen, a graduate student at Duke University.

For certain users, such as those who produce pharmaceuticals, a complete data trail is required by the Food and Drug Administration, as laid down in the Code of Federal Regulations Title 21, Part 11 (CFR 21 Part 11). This is particularly important for drug production and quality control, and some clinical labs may want this added layer of record keeping and password security, says Raymond Miller, a product manager at Bio-Rad in Hercules, California.

The simplest choice, Chen says, is to work with the software that comes with your imager. For researchers who want more options, The Scientist profiles five imaging programs.

The public domain ImageJ software platform, developed at the National Institutes of Health and augmented by various users, is loved by some and hated by others. ImageJ fan Corentin Cras-Méneur, an assistant professor at the University of Michigan Medical School in Ann Arbor, appreciates the flexibility. “It’s one shop for everything,” he says. “With ImageJ I would analyze Western blots, I would do some quantifications of fluorescent microscopy, I would control the microscope . . . anything you can think of.”

For most users, standard ImageJ should be sufficient to analyze bands on a gel or Western, Cras-Méneur says. But for those who want more, many plug-ins are available; coders versed in the Java language can also create their own plug-ins or macros. For example, Cras-Méneur uses a plug-in that analyzes how background signal varies across an image and subtracts it from bands accordingly, instead of assuming the background is uniform. 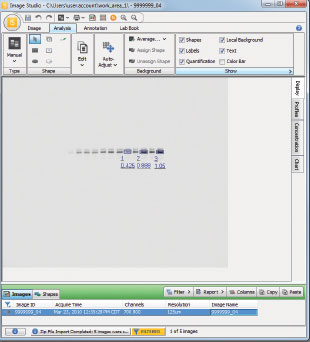 SOME, MORE, MOST: All programs discussed in this article can quantify band weight. LI-COR’s Image Studio shown here.COURTESY OF LI-COR BIOSCIENCESThe Image Studio software comes with imaging instruments from LI-COR Biosciences, but any scientist can download the Lite version. It’s the same software, minus the ability to control imagers.

Most users are happy with the Lite version, notes Jeff Harford, senior product marketing manager at LI-COR in Lincoln, Nebraska. However, LI-COR also sells additional, optional features. These include analysis of two-color or in-cell Westerns; a small-animal imaging tool that allows users to draw shapes around objects such as tumors or organs; and a tool to analyze multiwell plates. 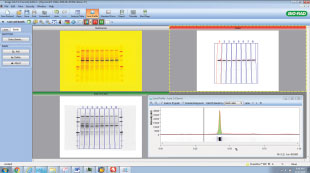 LINEUP: Bio-Rad’s Image Lab software can automatically define lanes and graph the density of signal across each, as can UN-SCAN-IT gel and CLIQS.COURTESY OF BIO-RADBio-Rad imagers, such as the Gel Doc or ChemiDoc systems, come with the Image Lab software. Researchers can use the software to control the machine and analyze data right on the spot, or transfer the files to a computer for analysis. The newest version of the software features a touchscreen and controls the ChemiDoc Touch.

Image Lab offers numerous features—so many that some users find it overwhelming. One can annotate bands, compare bands to molecular weight standards, and much more. “We’re trying to move away from the concept of just drawing boxes around bands,” says Miller. 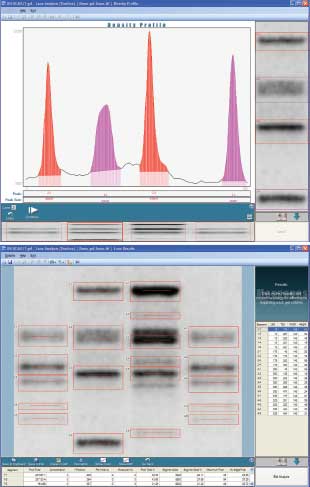 SETTING BOUNDARIES: All programs discussed let you fiddle with band edges based on the image and density plots. Shown here: UN-SCAN-IT gel from Silk Software.COURTESY OF JEFFREY SILKUN-SCAN-IT gel was designed to work with any kind of imaging platform—even a regular office scanner or digital camera. It can quantify Westerns, dot blots, gels, and thin-layer chromatography plates. “I like its simplicity,” says user de Rivero Vaccari. “I just need a pixel ‘thing’ and that’s it.” Scientists typically export the data to other programs such as Microsoft Excel or SigmaPlot for analysis and visualization.

UN-SCAN-IT gel also comes bundled with Silk Scientific’s UN-SCAN-IT software, which analyzes hard-copy graphical input—such as a line graph in an old publication or a strip of paper from an analog electrocardiogram—when you don’t have the original data. It digitizes the graph and extrapolates the numbers that likely generated it.

• It’s easy to use, says de Rivero Vaccari.
• When you draw a box around a band, the software graphically shows the distribution of pixel intensity. It will automatically suggest the borders of the band, but you can adjust the borders of the box based on the graph. “You can use that scientific intuition,” Silk says.
• When two or three bands overlap, the software will help you distinguish them.
• It’s made by a small, focused company. “You get me when you call for customer support,” says company president Silk.

• UN-SCAN-IT gel lacks some of the fancy features of some other programs; for example, it can’t process 2-D gels.
• De Rivero Vaccari finds it annoying that the software often stretches his original image in the main viewer window, which can make discrete bands look like smears. Silk says the user can choose to stretch the image or maintain the original aspect ratio. 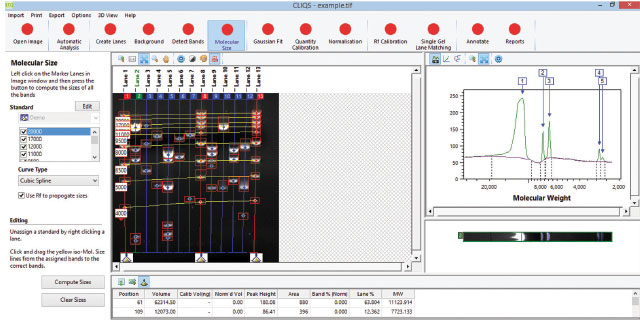 SIZE IT UP: All programs discussed in this article will compute protein size based on a lane with standard markers. Shown here is CLIQS from Totallab.COURTESY OF TOTALLAB

Totallab’s Core Laboratory Image Quantification Software (CLIQS, a combination of two programs formerly known as Phoretix and Totallab Quant) offers a variety of functions to analyze gels, blots, and microplate arrays, and to count colonies. It can automatically detect lanes and bands, calculate molecular weights based on a standard, and subtract background. It can also perform fairly basic measurements of spots on 2-D gels.

SameSpots and SpotMap are designed for in-depth analyses of 2-D gels. SameSpots allows you to compare multiple gels and match up the spots between them. SpotMap adds the capability to compare those gels to Westerns, and allows more-extensive image editing; you can add or delete spots. It is particularly useful for analysis of residual host cell protein content in biopharmaceutical production.