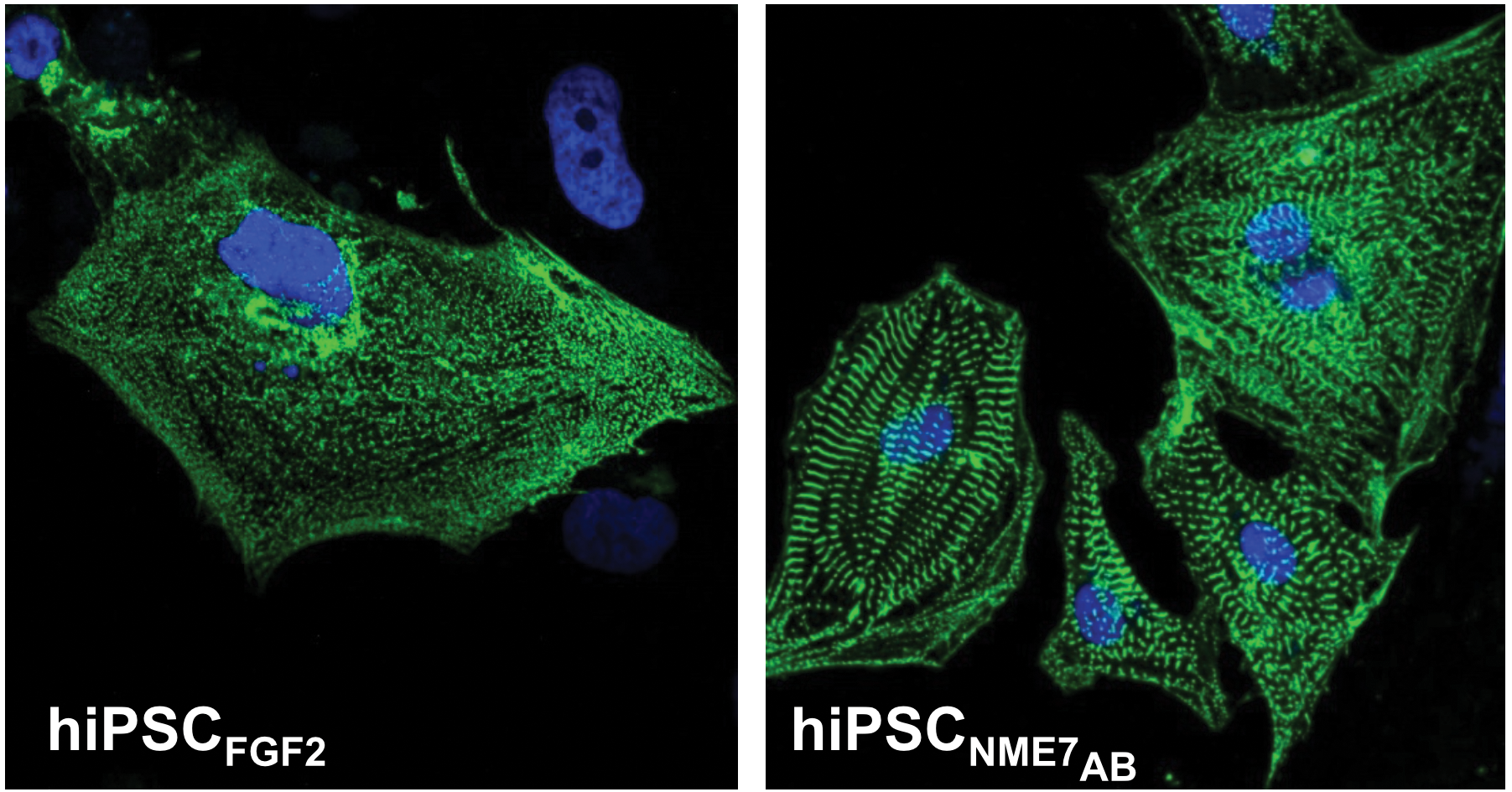 Cell biologist Alicia Lyle hoped to use mouse mesenchymal stem cells to deliver molecular cargos to tissues, and she also wanted to study how MSCs from different lines of knockout mice assemble into blood vessels. But Lyle’s group, at Emory University in Atlanta, soon hit a snag: growing the cells took ages.

“Even with the tenderest of care, it was taking somewhere close to eight to twelve weeks to even reach a point . . . to passage them,” recalls Lyle, referring to the point when cells crowd a dish and need to be split between multiple culture flasks. And by passage seven or eight, Lyle’s cells began to senesce, losing...

While mouse MSCs are particularly difficult to work with, Lyle’s complaints echo those heard across the stem cell field. To both understand stem cells and use them to treat diseases, efficiency will be crucial. “We want to harness that power of stem cells, we want to use it to treat patients, but then you are limited by how many you can make,” laments Abba Zubair, medical director for transfusion medicine and the Human Cell Therapy Laboratory at the Mayo Clinic in Jacksonville, Florida. No one wants to wait around for months while stem cells grow, or discover that only a few have the potential to differentiate as desired.

And stem cell treatments will only become affordable and commonplace if the technical processes used to develop them are efficient. For now, another type of cell therapy, the first approved CAR T-cell treatment for cancer, Novartis’s Kymriah, costs $475,000 for a single dose, suggesting that stem cell–based treatments using today’s protocols will be similarly complicated and expensive. Still, the potential demand for stem cells could be quite high, both to directly treat patients and for research into future treatments. To screen 1 million drugs would require on the order of 100 billion stem cells, as would building a human heart or liver from scratch.

We want to harness the power of stem cells . . . but you are limited by how many you can make.

How can scientists speed things up? Every stem cell type, from embryonic to induced pluripotent to tissue-specific, has its own particular requirements for healthy, optimal growth and differentiation. But there are a few general tips that all stem cell researchers can employ. Some scientists obtain good results by trying different growth factors. One particular recombinant growth factor, NME7AB, which supports cells in their most naïve, pluripotent state, can streamline experiments. Another tactic is to develop stem cell-nurturing, three-dimensional culture techniques, such as a new approach that encases cells in long, sausage-like tubes. And experimentalists can also improve their stem cell quality and yields by combining more than one method.

Overall, what seems to work is to provide a cell culture setting that mimics the natural stem-cell niche as closely as possible, which minimizes cell stress, advises Yuguo Lei, a biomedical engineer at the University of Nebraska–Lincoln.

Induced pluripotent stem cells (iPSCs), made from a person’s blood or skin cells, have become tremendously popular. But Cynthia Bamdad, CEO of Minerva Biotechnologies in Waltham, Massachusetts, says most iPSC cultures are not as “stem” as they could be.

The stem cells in the inner cell mass of an embryo, known as naïve stem cells, are what many scientists would like to imitate with iPSCs. They lack epigenetic marks that program cell fates, making them fully pluripotent. In contrast, most iPSC cultures are primed stem cells. They represent a more mature embryonic tissue, the epiblast that forms the external layer of an embryo. Primed iPSCs often contain epigenetic marks, though the genes turned on and off are fairly random, says Bamdad.

That means not all cells in an iPSC culture are truly pluripotent; many are already on their way to one cell fate or another. “It is difficult to make primed stem cells differentiate into mature, functional cell types that we need for therapeutics,” says Bamdad.

The reason iPSCs tend to turn out primed instead of naïve, she adds, is that most protocols use media containing fibroblast growth factor (FGF). “FGF, which is used to grow these cells during reprogramming and after, prevents them from going all the way back to the earliest state that we call naïve.” Only about 15 percent of iPSCs generated with FGF turn out to be “bona fide” iPSCs, says Bamdad.

Minerva’s AlphaSTEM cell culture products provide a more native environment, she says, because they use a different growth factor, NME7 (Stem Cells, 34:847–59, 2016). NME7 is typically expressed in very early embryos, so it better mimics the naïve stem cell niche. Using the recombinant NME7AB, Bamdad says, yields better iPSCs. “By ‘better,’ we mean works every time . . . better functional profile, higher yields,” she says. “They all can become any cell type.”  With AlphaSTEM Naïve HPSC Medium ($295/500 mL), researchers can reprogram the majority of cells in their cultures to a pluripotent state, she adds.

Other pro-naïve solutions exist, such as 2i and 5i media formulations. These rely on leukemia inhibitory factor (LIF) from mice and other biochemical inhibitors. While these media do yield cells that are more naïve than primed cells, Bamdad notes they can create instability in chromosome numbers, and she’s not sure how well they mimic true embryonic stem cells.

Another way to improve the stem cell culture environment is to consider its topo-graphy. Cells in the lab often grow in monolayers on flat glass or plastic. All those plates require a lot of space, media, and time to care for them; it’s highly inefficient. One solution is to grow cells in suspension, in large flasks or bioreactors. (See “Easier Ways to Grow Stem Cells,” September 2017, The Scientist.)

But big bioreactors create problems, too, says Lei. At first, the stem cells begin to cluster together into little spheroids. That’s good; stem cells don’t typically grow alone in situ. But in bioreactors, those spheroids eventually grow and coalesce into big aggregates. Nutrients and oxygen can’t reach the cells in the center of the aggregate, and wastes don’t easily diffuse out of the blob. “That makes the cell culture very inhomogeneous,” says Lei. Aggregation can slow growth, induce apoptosis, or alter differentiation patterns.

Stirring the tank minimizes aggregation, but such agitation creates a shear force that can kill cells, especially sensitive human stem cells. Lei’s lab has found that up to 40 percent of stem cells grown in spinning suspension die every day.

Lei sought a way to manage stem cell cluster size while protecting the fragile cells from shear forces. He developed a hydrogel tube in which stem cells can grow (Biofabrication, 10:025006, 2018). The lab uses a custom micro-extruder to make the tubes, which are up to 400 µm in diameter. As they extrude the alginate for the tube through a cylindrical channel (shell flow), they simultaneously pump a cell suspension through its center (core flow). These materials land in a calcium chloride buffer, which makes the alginate solidify into tubes around a cell suspension core. With the AlgTubes, his cultures look like vats of udon noodle soup, Lei says.

The tubes constrain the size of the cell aggregates so that nutrients and oxygen can still diffuse in, and wastes can filter out. The hydrogel barrier insulates cells from shear forces in moving media.

Lei’s results indicate stem cells are much more comfortable in the tubes. Fewer than 10 percent die every day. Yields are higher, with up to 500 million stem cells growing in every milliliter of media within the tubes, compared to 2 million to 5 million per milliliter in suspension culture. Lei expects it will be possible to scale that up. For example, one could make 10 billion cells with just two milliliters of space contained in tubes. The cells in AlgTubes can be cultured for more than 50 days, can expand 1,000-fold in just 10 days, and can be differentiated into a variety of cell types.

AlgTubes can last for months, and when the researchers want to get the cells back out, it’s easy. They use EDTA to chelate the calcium ions in the hydrogel, and the tubes fall apart.

Lei can provide scientists with detailed instructions for making their own AlgTube extruder, or his group can produce them for collaborators. He’s started a company, CellGro Technologies, to commercialize the extruder.

If one method improves stem cell yields and quality, wouldn’t two be better? That’s what Lyle tested with the mouse MSCs she isolated from bone marrow. A good protocol to grow and maintain mouse MSCs would be a boon for research, she says, because scientists already have so many genetically engineered mouse lines. Researchers could isolate MSCs from those lines, and then determine how different genes are involved in differentiation, she says.

It doesn’t have to be a one-pronged approach. It can be multifactorial.

Lyle read that basic fibroblast growth factor (bFGF) worked well for MSCs, likely due to its pro-growth and pro-survival signaling. (FGF wouldn’t be a bad choice in Lyle’s case, because she wasn’t trying to grow naïve cells.) She’d also seen reports that hypoxia would help. That’s probably because oxygen levels in the bone marrow, where MSCs naturally exist, are around 5 percent, much less than the atmospheric 21 percent that most stem cells are cultured in.

Image Container (remove this text once done styling the container) 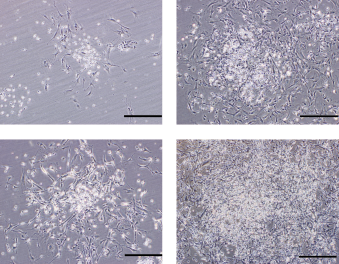 Overall, the MSCs in low-oxygen, bFGF conditions grew 2.8 times faster than under standard protocols, and reached passage 3, when cells are typically ready to test, within one month instead of the usual two or three. They were less likely to senesce, and retained their ability to multiply or differentiate until at least passage 11.The results of the dual treatment are “crazy good,” says Lyle, “I think because it’s closer to what their native niche is.”

Lyle has already used her protocol to generate MSCs from transgenic mice that make luciferase or GFP. Scientists could then engineer these MSCs and implant them into mice without the luminescent or fluorescent markers, and track where the glowing cells end up and how long they survive.

And she’d be happy to add other treatments to improve yields and efficiency. “It doesn’t have to be a one-pronged approach,” says Lyle. “It can be multifactorial.”

Indeed, Lyle adds, current stem cell culture protocols probably haven’t reached anywhere near the optimal conditions for efficient growth and division. “There is still a lot of area for improvement,” she says.