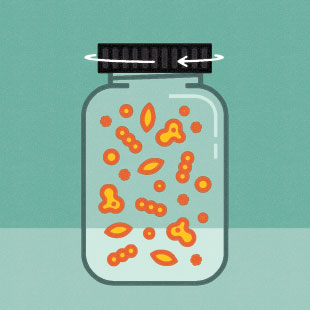 © BRYAN SATALINOIn the last decade or so, researchers have spent billions of dollars categorizing the microbes that populate sites as disparate as the human body, soil, and the oceans. Much of what we know about these different microbiomes has been determined using increasingly sophisticated next-generation sequencing technologies. For instance, scientists typically gauge a sample’s microbial diversity by performing high-throughput sequencing on the gene coding for 16S rRNA, a component of the small subunit of bacterial ribosomes. Shotgun metagenomics is a complementary technique used for microbiome studies when a researcher aims to sample all the genes in all organisms in a sample. These DNA sequencing technologies are quite sensitive, and can pick up fine-scale changes caused by contamination or by the hazards of sample processing.

Because variations in handling and storage of samples can impact a study’s results, maintaining the integrity of samples collected in the field is...

“The microbiome is so horrendously diverse and complex,” says Jack Gilbert, a microbial ecologist at the University of Chicago. “Any particular thing you do will change some part of [it].” As technology allows for more-in-depth investigations of microbial environments, even the smallest changes in the presence or relative abundance of bacterial populations can interfere significantly with community comparisons. The fewer variations a storage method allows, the better.

The Scientist spoke with microbiome experts to bring you the low-down on how to store samples in order to preserve their bacterial diversity.

GIVE IT A GOOD MIX OR TWO 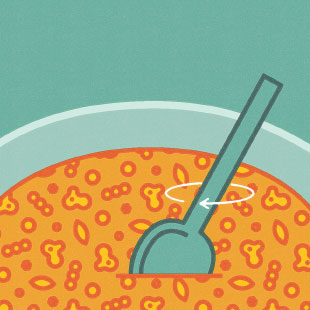 © BRYAN SATALINOMaintaining the fidelity of the original sample starts from the moment of collection. Step one is ensuring that you have a homogenous sample. “If a sample is not homogenized, homogenize it,” says Kim Heylen, a microbiologist at Ghent University in Belgium. “[Doing so] is crucial if you want to have reproducible subsamples.”

Holly Ganz, a microbiologist and postdoctoral fellow at University of California, Davis, started KittyBiome, a nonprofit that investigates the microbiomes of both wild and domestic cats, generally using samples of their feces.  “Poop is not homogenous,” Ganz says. “And that’s an issue: which part of the poop you sample will influence your results.” Ganz homogenizes her sample by first removing the exterior layer, which could contain environmental contaminants, and putting the rest into a plastic bag to manually mush and mix together. Next, she spreads the sample out and collects subsamples from across the sheet. “It’s really difficult to homogenize poop, so I just increase how many subsamples I take,” she says.

In a recent study of the human gut microbiome, researchers used a mortar and pestle to mash stool samples in liquid nitrogen before partitioning the resulting powder into smaller samples, transferring to test tubes, and freezing at −80 °C. Samples prepared by this method showed reduced variability in microbial composition compared with subsampling from unhomogenized fresh samples (PLOS ONE, 10:e0134802, 2015).
Soil has an even more complex matrix. Gilbert suggests putting your samples in a blender to break down the particles as much as possible. “It’s impossible to homogenize completely,” he says.

SHOULD I USE A CRYOPRESERVANT? IF SO, WHICH? 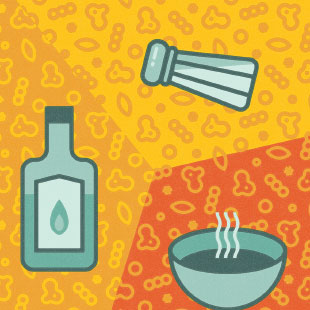 © BRYAN SATALINOCryopreservants—buffers that help stabilize the nucleic acids in a given sample—offer a low-tech, cold-storage solution. Cryopreservation protects cells from mechanical injuries caused by ice formation and fluctuations in freeze temperature.

Which cryopreservant to use depends largely on your plans for the sample. If you intend to culture the microbes or otherwise need to keep them alive, you might use glycerol, which prevents ice crystals from forming at temperatures as low as −20 °C to −80 °C. OpenBiome, a nonprofit stool bank based in Medford, Massachusetts, collects fecal material from healthy subjects to treat patients with Clostridium difficile infections. Because the success of the fecal transplant treatment depends on having viable microbes, the samples are mixed with a saline solution containing 12.5 percent glycerol, says Daniel Blackler, OpenBiome’s quality manager, and stored at −20 °C for up to six months and at −80 °C for up to two years.

Researchers have more choices if they only plan to investigate nucleic acid composition. For this type of study, the samples are added to a lysis buffer prior to storage. Although few studies have compared the effects of different cryoprotectants on maintaining the diversity of the original sample, available evidence suggests that cryopreservants can affect the presence of different species of bacteria to varying degrees (J Microbiol Methods, 113:16-26, 2015). “The key is in choosing a method that is feasible and appropriate for your study while also being aware of [its] potential biases,” Hale advises.

Overall, researchers have found that adding a cryopreservant is helpful for human samples. One quick way to evaluate cryopreservation success before comparing the microbial composition of your stored and fresh samples is to look at your yield of DNA, Ganz notes. “If you don’t get enough DNA, you’re not getting a good enough representation of the microbiome,” she says.

DMSO + Trehalose & Tryptic Soy Broth
Heylen uses a solution of dimethyl sulfoxide (DMSO) with trehalose and tryptic soy broth that helps maintain fidelity of frozen samples in three different microbiome systems (PLOS ONE, 9:e99517, 2015). “Trehalose protects against cell drying, and tryptic soy broth is an additional cryopreservant,” says Heylen. She advises bringing the solution to a temperature of around 4 °C and adding it right before the sample is placed in an ultra-low-temperature freezer. “If you don’t have access to a −80 °C freezer, you can use a household freezer. But definitely freeze your sample as soon as possible, and don’t freeze without a cryopreservant.”

RNAlater
Originally designed as an RNA preservant, RNAlater is an aqueous, nontoxic solution sold by manufacturers such as Qiagen (50 mL for $78; 250 mL for $324) and Thermo Fisher (100 mL for $125; 500 mL for $386) that can also be used to preserve DNA. In their work with the Human Microbiome Project, computational biologist Curtis Huttenhower of the Harvard T.H. Chan School of Public Health and his colleagues found that adding the preservant after sample collection can help if a freezer is not available.

But RNAlater comes with some user-reported downsides. While the fact that it is not flammable makes the preservant a suitable choice for shipping samples, RNAlater significantly reduces the population of Bacteroidetes and Ruminococcaceae compared with freshly extracted samples. Another challenge is that it must be removed before the sample is processed to get a good RNA yield. “There’s something about RNAlater that prevents the sample from pelleting normally, so after you remove the RNAlater, you have to wash the pellet a second time with phosphate-buffered saline,” Ganz advises.
Another potential problem with RNAlater is its high salt content, which can make sample clean-up a pain for some protocols, according to Mak Saito, a marine biochemist at the Woods Hole Oceanographic Institution in Massachusetts. Saito has used the solution to help preserve protein composition in marine microbiomes (Front Microbiol, 2:215, 2011).

Ethanol
Ethanol is a cheaper alternative to RNAlater and has been shown to stably preserve the community structure of fecal samples for more than eight weeks, even at room temperature (J Microbiol Meth, 113:16-26, 2015). However, ethanol is flammable, so it can’t be used in samples that will be shipped. What’s more, cryopreservation with ethanol leads to an increase in Cyanobacteria compared with freshly collected and analyzed samples. “All these storage methods introduce bias, so it’s important to [always] use the same method in your study,” says Ganz, who keeps her cat feces samples in 70 percent ethanol upon the recommendation of colleagues who store spider monkey feces.

No cryopreservant
For some types of samples, adding a cryopreservant changes the composition too much to be worthwhile. That’s the case for soil, says Gilbert. He suggests finding a way to freeze soil samples at −80 °C within 48 hours. “We want to look at the community composition and structure at the time the sample was collected,” he says. In situations where soil samples are very moist, Gilbert recommends freezing them immediately, because high moisture content can cause certain types of microbes to proliferate.

With fecal samples, too, there are times when cryopreservation is not appropriate. Samples that will be used to treat C. difficile infections, for example, can sit at room temperature for up to six hours without significant changes in the quality of treatment, Blackler says. 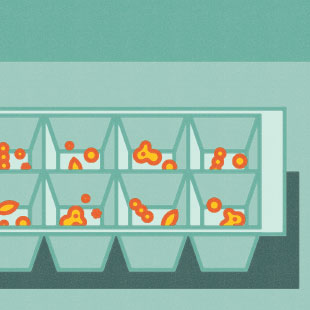 © BRYAN SATALINOMicrobiome samples are very sensitive to freeze/thaw cycles. “Thawing can present serious biases for microbiome samples,” Hale says. “DNA degrades with each freeze/thaw cycle, the opportunity for contamination and microbial blooms can occur when samples thaw, and volatile compounds are lost and cannot be recovered for potential metabolomics analyses.”

If only a −20 °C freezer is available, then it is best to use one that is dedicated solely to storing microbiome samples. “If a −20° freezer is continually being opened, then the temperatures can become so variable that the success of storage decreases significantly,” Heylen says.

At OpenBiome, researchers keep frozen samples at −20 °C for up to six months before transferring them to longer-term storage at −80°. Switching the samples to the ultra-low temp freezer should not negatively affect the microbes, says Blackler. However, “a sudden rise in the temperature should probably be avoided as this could impact the microbial community.”