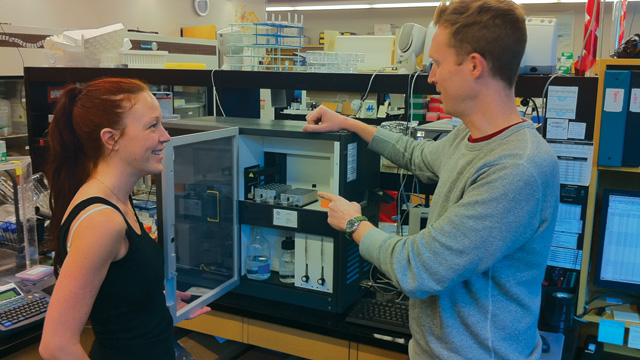 When researchers talk about antibodies, one of the first things they want to know is how well an antibody binds to its target—in other words, how specific it is. In a survey of antibodies use in the lab, conducted by business research firm Frost and Sullivan for The Scientist, 84 percent of respondents said that measuring antibody specificity was very important to their research.


For the characterization of antibody specificity, label-free detection systems using surface plasmon resonance (SPR) are king. Unlike ELISA or fluorescence-based techniques, these systems can measure the binding and dissociation of...

“SPR technology as a whole, and in particular Biacore, has the most options in terms of sensitivity and throughput,” says Matthew Blome, a scientist at Regeneron Pharmaceuticals who specializes in SPR and other label-free interaction analysis methods.

SPR hit the commercial scene in the early 1990s with Biacore, made by GE Healthcare, as the most commonly used brand. The instrument works by immobilizing one member of an interaction pair, called the substrate—in some cases the antibody—on a thin sheet of a metal, often gold. Then the sample—or target protein—is flowed over the sheet in solutions of varying concentrations. The instrument shines light onto the surface and measures its refractive index (RI), based on the angle at which the light bounces back. The RI value changes depending on the mass of the molecules on the chip: the RI increases as sample binds the substrate, while the RI returns to baseline as the sample dissociates. Rates of association and dissociation, and thus binding kinetics and antibody affinity, can be calculated from plots of change in RI over time.

SPR instrumentation, as well as researchers’ understanding of how to wield the technology, has come a long way in recent years, Blome says. The Scientist spoke with experts about how they are using SPR to glean insight into antibody binding, while overcoming the experimental challenges.

BIACORE 3000 INSTRUMENT AND CHIPS: The system can detect on- and off- rate of antibodies and other molecules.
BIACORE

Project
Determine if an HIV antibody called m18 blocks HIV infection by binding to the same epitope on the viral envelope protein gp120 as does the CD4 receptor, which the virus uses to gain entry into the (host) T cell.

Problem
Normally, one might affix gp120 to the metal surface and flow CD4 over it, followed by m18 to sort out whether m18 binds to the same location on the gp120 protein as the CD4 or a different one. But SPR readout, which is a function of the analyte’s mass, is especially tricky to interpret in this case because CD4 and m18 are similar in size.

Solution
Together with collaborators, Syna Kuriakose Gift, while a graduate student in Chaiken’s lab, turned the experiment on its head by premixing gp120 and CD4, which bind together, and then flowing the mixture over a substrate of immobilized m18. Binding of m18 to gp120 would therefore only occur if CD4 and m18 have binding sites on gp120 that are distant from each other. In a 2011 study, the team found that gp120-CD4 complexes failed to bind m18 anchored to the chip, suggesting that the m18 neutralizing antibody might act by competing with CD4 for gp120 binding. Challenge
Dissociation rate is harder to measure with a multicomponent system than with a two-component system. Although the premixed complex is likely to remain intact during association with the ligand, it may also might break off during the dissociation period. “It’s a mixture of two dissociation phenomena,” Chaiken says. As a result, you can really only know how CD4 and m18 compare in their affinities for gp120 by testing them separately in two-component SPR experiments.

New insights: conformational clues
“Proteins are not rocks, and gp120 is definitely not a rock,” Chaiken says. In response to binding to CD4, gp120 undergoes conformational changes that increase its affinity for the HIV T-cell coreceptor CCR5. In the 2011 study, Chaiken’s group found that m18 does not trigger the important conformational change in gp120 that normally allows it to enter cells, explaining why the antibody is so effective.

Problem
Historically, using SPR to detect whole bacterial cells has been plagued by weak signal emission. Part of the challenge is for the substrate antibody to locate its epitope on the highly heterogeneous cell surface.

Solution
Oftentimes antibodies are immobilized on a chip using a “glue” that orients the antibody and ensures that the epitope binding region is facing into the sample as it flows over the chip. However, O’Kennedy’s group found they could give their Listeria antibody a leg up by linking its molecules to long dextran molecules, allowing the antibodies to move more as if they are in solution and thus facilitate their binding to hard-to-reach epitopes, O’Kennedy explains. In addition, the group identified the ideal density of antibodies, which O’Kennedy says has to be determined experimentally for each binding pair, so that a bacterial cell, which contains multiple identical antigen epitopes, can simultaneously bind two antibodies, increasing the SPR signal.

Challenges
Whole cells are large and charged, and thus carry the risk of possibly clogging the tubing in the SPR instrument. Optimization is often necessary, such as decreasing the rate at which analytes are flowed through the instrument, O’Kennedy says. He adds that the plumbing varies between Biacore models. “Biacore 3000 is more sensitive at detecting an SPR signal, but Biacore 1000 may be better when working with larger cells because it has a lower chance of clogging.”

Room to Improve
In this context, SPR needs to be able to give a yes or no readout for the presence of bacteria. In a 2006 study, O’Kennedy’s group found that the lowest concentration of L. monocytogenes detectable by SPR was 107 cells/mL. However, to be useful as a commercial diagnostic, SPR would have to identify a single bacterium in 25 grams of food, according to current food policy, which would mean a single bacterium in one mL of food extracted into solution for SPR analysis. “I think it’s possible to achieve significantly better levels,” O’Kennedy says, by further modifying how antibodies are bound to the chip surface and developing an antibody with higher affinity for L. monocytogenes.

Problem
Amyloid-b peptide chains, or ADDLs, which are thought to play a role early in Alzheimer’s, are present at exceedingly low concentrations—in the femtomolar range (10-15) in cerebrospinal fluid and about 10-18 molar in blood, Van Duyne says. But the limit of detection for antibodies is in the picomolar range (10-12) under the very best SPR conditions.

Solution
Van Duyne’s group developed a method they call localized SPR (LSPR), which enlists nanoparticles to enhance sensitivity. They coated a silicate chip with triangular silver nanoparticles, thereby creating a strong electromagnetic field that shifts the wavelength of visible light, which the researchers exploited as their SPR readout. When binding occurs on the chip, the change in RI influences the electromagnetic field and causes a robust change in light wavelength. To further amplify the signal, Van Duyne’s group took a “sandwich assay” approach with their LSPR. They captured lab-generated ADDL antibody on the nanoparticle-coated chip, then exposed the antibody to samples of cerebrospinal fluid (CSF) from Alzheimer’s patients to allow binding of ADDL in the samples. Finally, they allowed a second ADDL antibody to bind ADDL to enhance the LSPR readout. When the second antibody binds, it gives the optimal increase in mass to shift the LSPR readout, Van Duyne says. Using this setup, the group managed to detect ADDL in the high femtomolar range.

Challenges
Because the readout for LSPR is a shift in wavelength rather than RI, researchers can run these experiments using only a standard fluorescent microscope, along with a CCD detector to detect the wavelength of the refracted light, as opposed to the SPR readout, which is based on light intensity. According to Van Duyne, one downside is that neither nanoparticle-coated chips nor ready-assembled LSPR instrumentation are commercially available: “There’s no company to hold your hand while you do it, while there is with SPR.”

Improvements: simplifying the sandwich
It may be possible to simplify the LSPR setup by immobilizing ADDL as the substrate to allow the addition of different CSF samples without sacrificing sensitivity. In a 2011 proof-of-principle study, using a different target protein and antibody, Van Duyne’s group showed that labeling either the capture antibody or a sample antibody with a second type of nanoparticle increases the sensitivity of the readout by three orders of magnitude.  Van Duyne says that the same setup could be used to detect binding of ADDL antibodies.

Problem
Many researchers use peptides as antibody-binding substrates, but this approach is fraught with complications. The Y-shaped antibody can bind two peptides simultaneously, which can artificially increase affinity measurements by several hundredfold, Pearson says.

Solution
Pearson and his colleagues get around this problem by immobilizing the monoclonal antibodies they want to screen on the chip, instead of the peptide. This scenario is free of avidity—or effects from an antibody’s bivalency—because, although each antibody can still bind two peptides, the peptides are in solution and can thus associate and dissociate independently of each other.

Challenges
It is trickier to get a good SPR readout by binding small molecules, like the 1- to 2-kDa peptides that Pearson’s group uses, than it is with large molecules such as antibodies, because the SPR signal is directly related to the mass. However, keeping the SPR instrument clean helps his group get reliable, if low, SPR signals, says Pearson.

Improvements: high throughput screening
To identify high-affinity antibodies that can detect scarce peptides, Pearson scaled up this approach so that he could screen 40 rabbit monoclonal antibody clones a day. To ramp up throughput, Pearson’s group used “capture” antibodies to snag the monoclonal antibodies. He bound “capture” antibodies  to the chip, which fished out the first monoclonal directed against the target peptide. Then he flowed the peptide solution over the chip and measured RI to check affinity. After each experiment, the team simply washed away the monoclonal-peptide complexes to reuse the chip. In this way each chip can often be used 100 times, Pearson says.