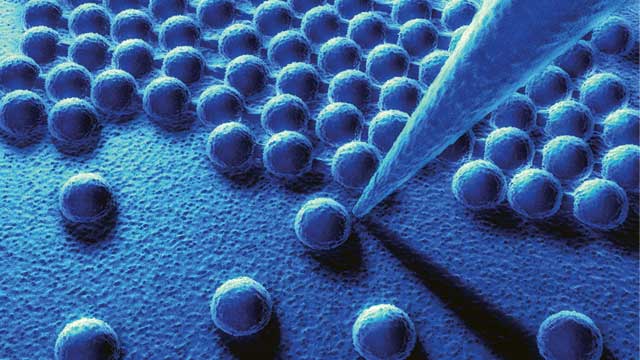 A TOUCHING SIGHT: The tip of an atomic force microscope probe is so small that it allows researchers to topographically map unaltered macromolecules and cells or measure the mechanical properties of biological samples. © MATTHIAS KULKA/CORBISEven powerful light microscopes fail scientists when molecules measure less than 200 nanometers, roughly a thousandth the diameter of an eyelash. However, touch can get a good bit closer than sight. By tapping and stretching molecules as small as a single nanometer, atomic force microscopes (AFM) reveal the topography and mechanical properties of objects or features too small for light or electron microscopes to discriminate.

In contrast to both light and scanning electron microscopy, for AFM the sample need not be dehydrated, labeled with fluorescent tags, or coated in metal before imaging. Therefore, cells, proteins, and DNA can be imaged unaltered. These qualities have won the instrument enthusiastic fans. “AFM is the simplest,...

Physicists invented AFM in 1986 as a technique to assess the properties of inorganic matter at the nanoscale. As these tools catch on among cell biologists, commercial manufacturers have begun developing and marketing them to suit biological-science needs, which reduces the time and expense involved in repurposing a standard microscope. That leaves researchers more time to ponder experimental design. The Scientist spoke with some AFM aficionados to bring you the basics.

Some researchers generate a topographical map with AFM by putting the microscope in “tapping” mode. In this mode, the cantilever oscillates at a constant frequency as it taps across a surface, but its amplitude varies as the sample surface dips and blips. These changes in amplitude are captured by the laser’s angle of reflection, which is detected by the photodiode, creating a pattern that reveals the sample’s shape. Alternatively, scientists can measure the elasticity or hardness of a sample with AFM. To do so, they attach the sample to the tip of the cantilever, and pull it as one would a rubber band. While applying a precise force to the sample, the AFM records how much the sample extends or deforms. The AFM can also produce a map of cell stiffness by measuring the cantilever displacement for a known amount of indentation. “If a cell is soft, the force required to displace the cell will be small,” says Daniel Fletcher, a biophysicist at the University of California, Berkeley. “If it’s a really stiff cell, that force will be larger.”

Several companies sell AFMs, including Asylum Research in Santa Barbara, California, recently acquired by Oxford Instruments; Agilent Technologies in Santa Clara, California; and Bruker, headquartered in Billerica, Massachusetts. The instruments range in price roughly from $100,000 to $400,000. Those at the higher end are capable of assessing topography, elasticity, sample conductivity, and various other material properties. Researchers who plan to assess the topography as well as the mechanical properties of samples should aim for a versatile instrument. Because AFM models change frequently, Thomas Thundat, a nanotechnology researcher at the University of Alberta in Canada, recommends that researchers visit a company or attend a trade show to learn which AFM is best for their needs.

Because AFM is so sensitive, fluctuations in temperature and humidity can cause the cantilever to drift and obscure measurements. If possible, keep the AFM in a temperature- and humidity-controlled room. While room temperature suits many experiments, living tissues and cells behave best at body temperature, around 37 °C.

Finding the best cantilever for the job 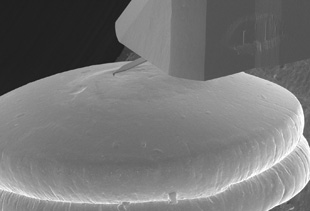 SEEING IS BELIEVING: A scanning electron microscope image of a 160 µm long cantilever hovering above the head of a pin. In the upper right-hand corner of the image is a large “handle” into which the cantilever is loaded with tweezers. The small, sharp imaging tip is visible at the left-hand end of the cantilever in the center of the image.COURTESY OF ASYLUM RESEARCH, AN OXFORD INSTRUMENTS COMPANYCantilevers generally cost between $100–$300, and must be exchanged, as their tips dull over time. In general, the smaller they are, the more useful, says Jason Cleveland, the CEO at Asylum Research. The latest versions are roughly the width of a human hair. Tiny cantilevers respond quickly to slight changes in force. They are also less susceptible to outside interference, simply because they have less surface area available to be hit by molecules floating in the atmosphere, compared to larger cantilevers. Therefore, small size is particularly important when imaging in liquid and when imaging dynamic processes in real time.

The second characteristic to consider is stiffness. Cantilevers act as springs with varying levels of bounce, described in mathematical terms as a “spring constant,” Cleveland says. “Their stiffness ranges from something like a Slinky to the spring in a garage-door opener.” When imaging, choose a less “springy” cantilever with a relatively high spring constant—in the range of 15 to 100 piconewtons per nanometer. At this stiffness, the needle is stiff enough to tap across a sample quickly at a constant frequency without becoming stuck to the surface due to the water present on most samples. Cleveland says a cantilever with a sharp tip yields the best resolution, but it will damage the sample over time.

When measuring elasticity or other mechanical properties of a sample, you’ll want a softer cantilever with a low spring constant so that the cantilever can detect small changes in force. For example, Fernandez uses cantilevers with spring constants of 15 piconewtons per nanometer or less when he studies protein folding. Pallav Kosuri, a postdoctoral student in Fernandez’s laboratory, wanted to understand the mechanics of how the enzyme disulfide isomerase helps proteins fold and also “locks” them into position by forming disulfide bonds. As described in a study published last November, the team attached a protein to the cantilever tip and unfolded it by slowly tugging at one end while the other end remained anchored to the glass slide. Once the protein unfolded, the enzymes present in the buffer naturally bound to it and catalyzed protein folding, with the cantilever tip still attached. After the protein re-folded, the team stretched the protein out once again to compare that process with the initial unfolding pattern (Cell, 151:794-806, 2012; see photo below).

Good data depends on the quality of your experimental setup. If the sample is inert, measurements can be made with the sample exposed to air. Liquid setups are trickier to prepare, but they allow you to observe live cells and molecules in a more natural state.

In either case, the sample needs to be on a flat surface. Many experts choose slabs of the mineral mica as a substrate because it is flatter than glass. To make mica perfectly smooth, Cleveland recommends sticking a piece of Scotch tape on it and peeling the tape off slowly. Be sure that the surface does not repel the sample. If it does, the sample will bend away from the surface, effectively hiding angles from the AFM’s view. “You need to imagine that you are capturing a shape by the shadow it casts,” says Keir Neuman, a biophysicist at the Laboratory of Molecular Biophysics at the National Institutes of Health in Bethesda, Maryland. For example, because DNA is negatively charged and mica is also negatively charged, Neuman adds magnesium, which has a positive charge, to the buffer containing the DNA. When the buffer evaporates, the magnesium remains, attracting the DNA to the surface. Alternatively, some researchers pretreat the mica with magnesium chloride for the same reason.

In some experiments, particularly those that measure elasticity, strong adherence is a plus. For this reason, Fernandez often uses glass cover slips coated lightly with gold, which covalently bonds with proteins and helps them withstand tugs from the cantilever tip for several minutes. For measurements taken over hours or days, Fernandez adds special enzymes to the preparation that firm up covalent bonds between samples and substrates (e.g., HaloTag enzymes from Promega).

Despite the added complexity of observing samples in liquid, Carlos Bustamante, a biophysicist at the University of California, Berkeley, says it’s worth the trouble. “Imaging in water is helpful because we often want to see how molecules come together and form complexes,” Bustamante says. “You can follow processes like microtubule instability, myosin walking on actin, DNA replication, and much more.” Experiments occur within a droplet of liquid or in a pool within a small petri dish. In one of Bustamante’s studies, in which he assessed how DNA polymerase finds a promoter sequence on DNA, he deposited the DNA in a drop of water onto mica, which had been chemically modified to carry a slight positive charge. The cantilever and its tip were then submerged and tapped rapidly along the DNA a number of times. They could observe the enzyme crawling along the sequence. In contrast, Fletcher studies how fibroblast cells stretch underwater, by attaching the cells to the mica surface and the cantilever tip using integrin proteins. Moving the tip allows him to measure how well fibroblasts stretch.

For many types of AFM experiments, no protocol exists because there’s so much that has not yet been done. Bustamante’s advice: “Do trial and error.” Some experiments might not be impossible, but could be extremely difficult to execute. “Biologists sometimes want to see what a molecule is doing on the surface of a cell,” says Cleveland. “I’ll remind them that if the molecule is on a cell, it’s essentially sitting on a bag of liquid, so they’ll need to figure out some way to keep it steady.” 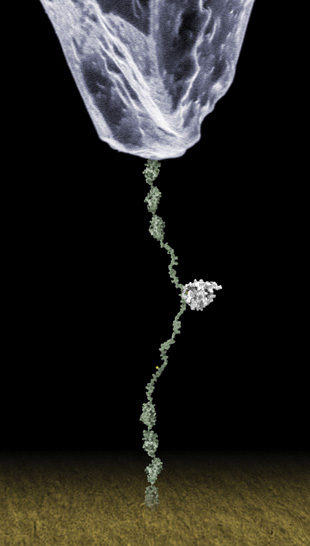 RUBBER-BAND MODE: In this representation of an atomic force microscopy experiment, a single polyprotein (green) is tethered between a gold-coated cover slide (yellow) and a cantilever tip (blue). The protein consists of identical immunoglobulin domains that unfold independently when a stretching force is applied. Unfolding one of the middle domains has exposed its cysteine residues, which can then form complexes with oxidase enzymes (white). Researchers in the Fernandez lab use the technique to study the process of protein folding.COURTESY OF PALLAV KOSURIOne major benefit of AFM is that destructive agents like fluorescent proteins need not be applied. A consequence, however, is that researchers may mistake the wrong molecule for their sample because both it and contaminating particles that get in the way are too small to see. One way to ensure specificity is to lend the sample a “fingerprint” by engineering your protein of interest with a polypeptide that has a unique and well-known repeated sequence of amino acids. As the AFM pulls the protein, one section of it will unravel in a pattern consistent with that polypeptide alone.

When protein engineering is not an option, Neuman suggests coating the tip of the cantilever with a substance that attracts the sample. For example, to study how strongly an antibody binds to its ligand, coat the tip with the ligand. Ligands and other molecules can be applied with chemicals that function like a glue, such as polyethylene glycol. When the ligand-coated tip nears the antibody, the two will bind. Pulling the tip away measures the strength of the antibody binding as it stretches to maintain its bond with the ligand. In other instances, researchers have measured the mechanical forces underlying DNA replication by sticking single-stranded DNA molecules to the cantilever tip so that it binds to the complementary single-stranded DNA on a surface. After the two strands hybridize, the AFM measures the force needed to pull them apart. “When a fingerprint isn’t feasible,” Neuman says, “people must be creative about designing their experiment so that the cantilever tip plays an active role.” (For more ideas on how to decorate cantilever needles, see P. Hinterdorfer et al., “Surface attachment of ligands and receptors for molecular recognition force microscopy,” Colloids and Surfaces B: Biointerfaces, 23:115-23, 2002.)

When using AFM to image molecules, researchers typically leave the tip alone and rely on sterile laboratory techniques and their knowledge of the sample. “You have to know that the only thing on the surface is DNA,” says Fletcher. “And, if you are scanning DNA but you see things that are larger than it should be and rodlike in shape, you need to know that it is not DNA.” 