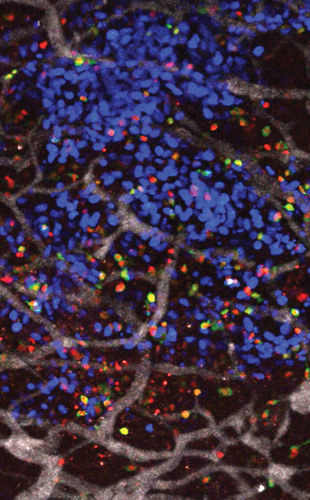 EYES ON Ts: Using intravital microscopy researchers can take an in vivo look at T cells (green and red) infiltrating a mouse tumor.IMAGE BY FRANCESCO MARANGONIActivated T cells are a diverse and ever-changing crew. What gives this type of white blood cell the ability to stamp out infection is also what makes it complicated to study. T cells express receptors that respond to specific antigens. Not only different subsets of  T cells, but individual T cells, can react to the same antigen in different ways—for example, by rapidly expanding and differentiating, by releasing distinct sets of cytokines at certain times, or by killing other cells. And, influenced by their past and present experiences, they can change their behavior over the course of months or years.

Because T cells are so flexible in form and function, and are in a constant state of transition, researchers are realizing that...

Technologies that track T cells on the single-cell level are beginning to resolve these cells’ heterogeneity and to show how T-cell populations shift through their continuum of states. “There’s a growing sense that we need to understand how individual T cells behave,” says Ton Schumacher, group leader in immunology at The Netherlands Cancer Institute in Amsterdam. Different single-cell-level techniques for doing so each bring unique angles to learning about the many personalities of  T cells.

The Scientist sought out experts who are using techniques new and old to study single T cells. Here’s what they said.

Technology: Love’s group created an array of 85,000 or more wells—each of which holds less than 1 nanoliter—that allows them to separate individual T cells and quantify their secretions over time. They deposit a suspension of  T cells over the array and allow the cells to settle by gravity, then seal the chip with a glass slide coated with one or more antibodies specific for secreted proteins, repeating this step at different time points. The antibodies on the glass slide capture the secreted proteins, which are subsequently labeled with fluorescent antibodies. The T cells themselves are fluorescently labeled either before or after the glass slide captures their secreted proteins.

Standard automated microscopes read out labeled proteins and cells. Although Love’s arrays are customized, anyone can use soft lithography methods to make their own, he says.

Application: By combining microwell arrays with high-resolution automated imaging, Love’s group was able to examine the sequence and time scale in which polyfunctional human T cells release a set of particular cytokines. They learned that release occurs in a well-defined order, which may help further define these T-cell populations according to function (PNAS, 109:1607-12, 2012).

Pros:
• Sensitive. By isolating large numbers of cells (around 100,000), the technology allows “fine resolution
of rare events,” Love says.
• Nondestructive. The individual cells can be recovered for additional analysis. Love has successfully
expanded them in culture.
• Affordable. A typical experiment costs about $100–$200 in materials and reagents, including
antibodies. Materials and cost of the master mold run about $5–$10 per array, plus 1 hour’s worth
of labor. You will also need access to a wide-field epifluorescence microscope (preferably automated).
The master molds can be reused about 100 times before they become damaged, and the arrays
themselves 3–4 times.

Cons:
• Low throughput. One chip can process only a few clinical samples.
• Low temporal resolution. It takes 1–2 hours to take measurements of an entire array—sufficient for the
half-lives of the secreted molecules Love’s group is studying, but not for studies of intracellular T-cell
signaling, which unfolds over minutes.
• Limited multiplexing. The number of molecules you can measure at once is limited to 4 or 5.

Considerations: The challenge comes in data analysis. With a grant from the National Institutes of Health to develop better software that links all of the measurements of a cell back to its unique spatial location on the chip, Love hopes to help researchers interested in serial microengraving integrate their data more quickly.

Technology: Mass cytometry is similar to flow cytometry in principle, except that in mass cytometry, antibodies are tagged with rare-earth heavy metal isotopes instead of fluorophores. (The instrument, called CyTOF—for “cytometry by time of flight”— is manufactured exclusively by DVS Sciences in Sunnyvale, California; www.dvssciences.com/.) Just as in flow cytometry, cells with molecular features of interest labeled by tagged antibodies move single file through a narrow tube, but at the end they are sprayed into a mass spectrometer, which vaporizes them to their atoms, flings them against a detector—the lightest arriving first—and counts the heavier ions present in or on the cell.

CyTOF’s key advantage over flow cytometry is its ability to analyze 30–40 markers simultaneously. In contrast, flow cytometry can tackle about 15 markers tops, says Davis, in part because of the corrections needed for the fluorophores’ spectral overlap.

DVS Sciences is continuing to expand its catalog of metal-tagged antibodies, making the process of developing an antibody panel to profile T cells much less daunting than it was a few years ago.

Applications: Using CyTOF to phenotype CD8+ T cells from human blood, Davis showed that these cells exhibited an unexpected gradation of phenotypes and secreted a more complex range of cytokines than previously thought. Even cells specific for a given antigen show a variety of phenotypes and functions (Immunity, 36:142-52, 2012). Better understanding such differences might help researchers predict T-cell responses.

Pros:
• Unmatched multiplexing. 30 markers produce more than a billion possible combinations, providing a
huge boost in potential resolution, Davis says, and T cells are complex enough to make that
worthwhile. “This is going to be a quantum leap in understanding phenotypic and functional variation
in lymphocytes and white blood cells in general.”
• Efficient. CyTOF can make more measurements in a smaller volume of blood, compared with flow
cytometry. This allows the group to phenotype pediatric samples, which usually come in small volumes
—something they couldn’t do with flow cytometry, Davis says.

Cons:
• Low throughput. It takes 15–30 minutes to analyze one sample.
• Destructive. Cells are burned by the analysis—in fact, about 60–70% are vaporized without getting
measured at all—so you can’t analyze them over time or go back and phenotype them further.
However, you could sort cells into populations ahead of time using fluorescence-activated cell sorting
(although then you’re back to fluorophores, and consequently a cap of 10–12 parameters).
• Expensive. Reagents for a single sample cost more than $300. A CyTOF machine costs roughly
$650,000. However, the data obtained is well worth these extra costs, Davis says.

Considerations: Traditional flow cytometry data-analysis software can’t handle 40 parameters’ worth of data. Scientists have come up with two ways of dealing with the complex data from CyTOF: 3-dimensional principal component analysis (3D-PCA), which reduces the dimensionality of the data by homing in on its most variable features, and SPADE, a type of clustering that distributes data and reduces its variability. Each analysis tool has its own disadvantages and advantages, but together they are complementary, Davis says. 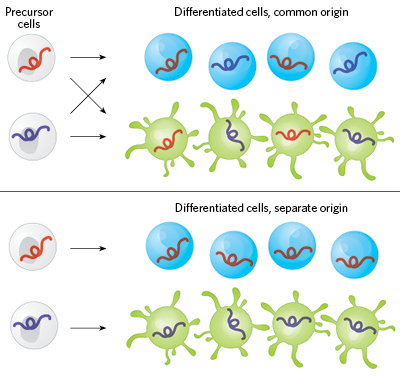 CELLULAR BARCODING: Researchers label each progenitor T cell with a unique genetic tag (shown in red or blue) that is passed on to all daughter cells. Scientists can then tell whether two descendent cell populations have a common or distinct origin. If the populations have a common origin, they will have both red and blue tags (top panel). If they have separate origins, only one tag will be found in each population (bottom). THE SCIENTIST STAFFUser: Ton Schumacher, group leader in immunology, The Netherlands Cancer Institute, Amsterdam

Technology: To uniquely tag individual cells with molecular barcodes, Schumacher’s group generates lentiviral or retroviral plasmid libraries containing thousands of different plasmids, each of which contains a short stretch of noncoding DNA (the barcode) as well as a gene for green fluorescent protein.

The group introduces these libraries into T cells, and then injects those cells back into mice, allowing them to differentiate and expand. After the experiment, the group harvests various tissues from mice, and uses a second-generation sequencing-based detection system to parse them according to their lineages.

Application: If you want to follow how particular subsets of T cells or other immune cells are formed, or how heterogeneity arises, cellular barcoding is particularly powerful, says Schumacher.

However, the cells you follow should have the ability to expand substantially for the tracing to work. Using barcoding, Schumacher’s group recently reported that the fate of single naive T cells from mice is surprisingly unpredictable, given how uniformly the populations of these cells appear to differentiate and expand during an infection (Science, Epub ahead of print, 14 March 2013).

Pros:
• Goes the distance. Great strategy for longitudinally tracking the progeny of cells and their long-range
migration in a living animal
• Casts a wide net. Unlike lineage tracing, the technique gives each unique parent T cell a label which
allows researchers to track the fate of many cells and their progeny.

Cons:
• Lengthy set-up time. Getting the technique up and running can take several months, even for a lab
that’s already familiar with mice and lentiviral transduction.
• Destructive. Readout requires lysing the cells, so any additional analysis must occur before barcoding.
However, you can preselect a population of cells to barcode and introduce into the animal,
Schumacher says.

Considerations: The setup, which involves creating a large series of primers, costs a few thousand dollars. The cost of sequencing is the major limiting factor and depends how much sequencing and coverage you need—a deep sequencing answer can cost as much as $10,000. Schumacher is open to sharing his plasmid libraries with newcomers. Keep in mind, however, that accurate results require a tag sampling control—to assess whether you can recover the full repertoire of tags—as well as a tag distribution control, which tests the degree to which individual naive T cells share similar tags by chance (Nature Rev Immunol, 10:621-31, 2010).

Technology: Intravital microscopy (IVM) enables in vivo, live-cell imaging of a small part of an animal that has been immobilized on a stage. (See “Eyes on Cancer,” The Scientist, April 2012.) It’s not new, but because of the great improvements in microscopy and imaging software in recent years, scientists are able to peer into tissue to greater depths without sacrificing resolution.

Depending on the area imaged, experiments can last 1 to 12 hours. Mempel’s group can look at four different cell populations, or parameters, using fluorescence labeling.

Application: The group was able to see how T cells migrated within lymph nodes and tumor tissues of living mice, and how their interaction with other cells affected their gene expression and behavior (Immunity, 38:237-49, 2013).

Pros:
• In vivo. For T cells, this technique is especially powerful because cells can be studied in their natural
surroundings—which hugely affect their function.
• Real-time. You can continuously observe cells (every second or minute), unlike cellular barcoding,
where you get a single time point. (On the other hand, most IVM experiments can’t be done on a time
scale of months.)

Cons:
• Difficult to master. The microsurgical techniques and the maintenance of tissue for long-lasting
experiments can be enormously challenging. Even in a lab with IVM experience, expect 6 months to
consistently generate reproducible results and a year to become an expert, Mempel says.
• Narrow focus. The technique scopes out an area of 100–600 μm2 and 40–100 μm deep, which captures
only tens or hundreds of cells. T cells can migrate over longer distances.
• Expensive. Mempel’s setup, a multiphoton laser-based microscope, costs about $700,000, but expect
to pay a minimum of $350,000 for the essentials: an infrared laser and microscope.

Considerations: Mempel finds that some people want to try IVM but have no clear idea of what they would like to learn. “It only makes sense if you have a very defined scientific question” that can’t be answered using other methods, he says. 