TARGET PRACTICE: Free computational tools available on the Web can simplify a few of the steps involved in developing an SRM/MRM assay. Once developed, an assay will need to be further refined and validated by the researcher.
View larger: JPG | PDFTHE SCIENTIST STAFF

Mass spectrometers can quickly spit out spectra of an organism’s complete complement of proteins, known as the proteome. Shotgun experiments, also known as data-dependent analyses, aim to ID as many sample proteins as possible. “This is a great method to establish a protein inventory of a cell or tissue,” says Ruedi Aebersold of the Swiss Federal Institute of Technology in Zurich. “But it is less well suited to compare precisely the abundance and presence of specific proteins across many samples.”

That’s where a targeted mass spectrometry technique known as selected reaction monitoring (SRM) can come in handy. It’s a tried-and-true method that has been...

While advanced mass spec–based methods for targeted protein analysis have been developed in recent years (see “Moving Target,” The Scientist, June 2014), approaches based on SRM are the most mature and widely used. Of course, an SRM approach covers a much smaller subset of the proteome than a shotgun strategy, and it requires more up-front legwork to design an SRM assay. But by carefully programming the mass spectrometer to perform sequential rounds of SRM, a strategy known as multiple-reaction monitoring (MRM), researchers can accurately detect and quantify hundreds of proteins in a sample at a time. And the potential pitfalls of SRM—that it can be slow or cumbersome—can be addressed with bioinformatics and careful planning.

To develop an SRM or MRM assay, researchers first need to identify peptides that map only to their protein of interest and are not found in any other protein that could be present in their sample. They also need to choose at least one fragment ion to serve as a marker for each particular peptide ion produced in the mass spec. Then the instrument can be programmed to look specifically for the mass-to-charge (m/z) ratios of the peptides and fragment ions of interest. Each particular combination of peptide and fragment ion is known as a transition, and must meet a number of criteria. For example, some peptides have a tendency to ionize poorly, and would thus be unsuitable for mass spectrometry. Others may be subject to posttranslational modifications, which can interfere with detection and quantification.

It is possible to manually design SRM and MRM assays, but the process can be challenging and time-consuming. Here, The Scientist profiles five free computational tools that can streamline the process.

What It Does: MRMPath is an online tool that predicts suitable peptides for MRM assays based on protein sequence. Users first enter the accession number or sequence of their protein of interest. Alternatively, users can choose a particular biological pathway and species, and MRMPath generates a list of all the proteins involved in the chosen pathway using information stored in the Kyoto Encyclopedia of Genes and Genomes database (KEGG; www.genome.jp/kegg/). Users then select one of five different enzymes commonly used in mass spectrometry-based proteomics to produce peptide fragments, and the program computationally digests the selected protein into smaller pieces. MRMPath generates a list of 7- to 25-amino-acid-long peptides, automatically excluding any that contain methionine or cysteine amino acid residues, which are susceptible to oxidation and can interfere with analysis by mass spectrometry.

The program also provides the predicted m/z values of each peptide and its fragment ions. From there, users can click the “BLAST” button, and MRMPath will search protein sequence databases compiled by the National Center for Biotechnology Information (NCBI; blast.ncbi.nlm.nih.gov) to identify peptides that are unique to the protein of interest. MRMPath helps users to optimize their SRM and MRM assays for specificity, says Stephen Barnes of the University of Alabama at Birmingham whose lab developed the tool. “What we’re really trying to avoid is having a mass-spec experiment that is not unique to a protein or to a species.” 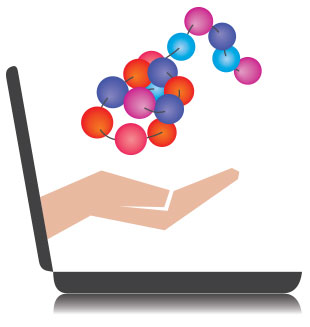 LAPTOP: ©GRAPHICSDUNIA4YOU/ISTOCKPHOTO.COMWhat It Does: MRMaid is a Web-based application developed by Bessant’s lab that suggests SRM transitions based on the peptides and fragment ions that have been detected previously in shotgun proteomics experiments stored in the public data repository known as PRIDE (PRoteomics IDEntifications; www.ebi.ac.uk/pride). MRMaid users simply choose their species of interest (currently limited to human and Arabidopsis thaliana) from a drop-down menu and enter the name or accession number of one or more proteins into the search box. Then the program uses data from PRIDE to generate a list of potential transitions to monitor in an SRM or MRM experiment.
MRMaid also provides information that can aid in the design of a targeted assay, such as the peptide’s retention time, the m/z values for the peptide and fragment ion, and the average intensity of the ion. Each transition in the list is assigned a so-called peptide score, which indicates its suitability for SRM based on the quality of the peptide’s available fragmentation spectra.

What It Does: PeptidePicker is a Web-based application that integrates information from a variety of different data sources to compile a list of optimal peptides for an SRM/MRM assay. Users enter a protein accession number, choose their species of interest (human or mouse only), and specify a minimum and maximum length of peptides (the default setting length is 7–20 amino acids). If desired, users can also choose to limit the program’s focus only to peptides that satisfy certain criteria, such as only those peptides that exist in all known isoforms of a protein, or peptides that lack known or potential posttranslational modifications.

PeptidePicker first computationally digests the protein into peptides with the enzyme trypsin, and excludes any peptides that are not unique to the proteome of the specified organism. Then the program generates a list of potential peptides ranked according to a so-called v-score, which indicates their suitability for SRM/MRM assays according to the user’s optimized criteria.

In generating the v-score, PeptidePicker automatically queries large proteomics repositories, including PRIDE, the Global Proteome Machine database (GPMDB; gpmdb.thegpm.org), and PeptideAtlas (www.peptideatlas.org), and rewards peptides that have been observed previously by mass spectrometry. The program also searches protein-specific databases, including UniProtKB (www.uniprot.org/uniprot/) and the NCBI’s database of single nucleotide polymorphisms (dbSNP; www.ncbi.nlm.nih.gov/SNP/), and penalizes peptides that have any known sequence variations. “This tool combines our knowledge—years and years of experience of how the selection should be done—with what is known and described in databases,” says PeptidePicker developer Christoph Borchers, director of the Proteomics Centre at the University of Victoria in British Columbia, Canada. 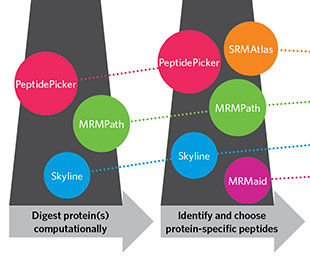 TARGET PRACTICE: Free computational tools available on the Web can simplify a few of the steps involved in developing an SRM/MRM assay. Once developed, an assay will need to be further refined and validated by the researcher.
See full infographic: JPG | PDFTHE SCIENTIST STAFFWhat It Does: SRMAtlas is a database of SRM transitions and mass spectra derived from synthetic peptides created for SRM assay development and analyzed on the types of mass spectrometers most frequently used for SRM/MRM experiments—triple quadrupole, Orbitrap, and quadrupole–time-of-flight instruments. Users can search SRMAtlas using a protein accession number or peptide sequence, or by uploading a text file containing a list of protein names or peptide sequences. “We made at least eight peptides for every protein, and then measured them all using a number of mass spectrometers from different manufacturers,” says Rob Moritz of the Institute for Systems Biology in Seattle, whose lab created SRMAtlas together with Aebersold’s team in Zurich. “It’s sort of like a one-stop resource in which essentially all proteins from an organism have at least one assay or more per protein.”

What It Does: Skyline is a Windows-based desktop application developed by Michael MacCoss’s lab at the University of Washington in Seattle for designing SRM/MRM assays and analyzing the resulting mass spectra. Skyline helps users select peptides and transitions based on mass spectra from their own experiments or imported from public proteomics data repositories. Users first import the sequence of one or more proteins of interest into Skyline, and the program computationally digests the proteins into peptides. Skyline can automatically exclude peptides that don’t adhere to certain user-defined criteria, such as sequence and length. If desired, Skyline can also suggest or refine a list of potential peptides using imported spectra from previous studies. Users then analyze the suggested peptides by mass spectrometry, and the program can help determine which transitions to monitor based on signal intensity and specificity.