Andy received his PhD from the University of California, Los Angeles, in 2014, focusing on neuromodulation and engineering. He subsequently completed his postdoctoral training at Stanford University, where he developed...

Cells constantly interact with each other and with the surrounding extracellular matrix through physical forces such as tension, pressure, torque, and shear stress. Over the past 50 years, biologists have increasingly come to recognize the important role biomechanics plays in the function of cellular activities such as gene expression and signaling. (See “May the Force Be with You,” The Scientist, February 2017.)

One key tool for studying how physical forces affect cells is the micropipette aspirator, a tiny glass pipette that applies pressure on a section of the cell membrane; testing gene expression, protein levels, or other factors can point to the effect of such forces on the cell. Researchers also use atomic force microscopy, which senses how cells respond to tiny mechanical pokes; apply fluid shear stresses to perturb membrane mechanosensors; and stick cells onto flexible polymers to investigate how their cytoskeletons...

However, these methods can only yield insights by looking at the whole cell at once, and not at smaller entities such as organelles and structural specializations. As the field delves into the mechanobiology of the nucleus, and investigates interactions between cells and between proteins and cell membranes, a new set of techniques has emerged. One widely used approach, three-dimensional microfluidics, segregates subcellular structures such as axons and dendrites into different microfluidic compartments to determine exactly where and how external forces affect cellular biology. Another emerging method deploys magnetic nanoparticles onto the cell to exert forces with better spatial and temporal control than conventional tools such as the micropipette aspirator.

These newer approaches have yielded surprising insights into intracellular processes, from how the cell deforms to how external force affects cell signaling and induce cell migration. For example, scientists have found that the stiffness of extracellular matrix can influence stem cell differentiation, that stretching chromatin can upregulate transcription, and that cytotoxic T cells use mechanical forces to recognize pathogens in order to eliminate them from the body. 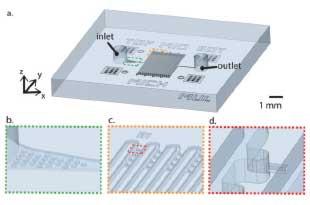 ALL TOGETHER NOW: The Liu lab’s microfluidic apparatus (top) allows the measurement of mechanical forces on 128 cells simultaneously. The bottom panel shows a filtering unit (left) that removes clumps of cells and debris before single cells enter a continuous microchannel folded into 16 columns with 4 aspiration chambers per column (center). Each chamber connects to a micropipette through which mechanical forces can be applied to individual cells (right).LAB ON A CHIP, 15:264-73, 2015Researcher: Allen Liu, Assistant Professor of Mechanical Engineering, University of Michigan

Problem: Micropipette aspiration of a section of an intact cell is a useful technique for measuring mechanical properties such as the cell’s stiffness, but setting up the experiment is time-consuming, and throughput is extremely low (~10 minutes/cell).

Solution: Liu and colleagues fabricated a microfluidic device consisting of a group of micropipettes that can perturb up to 128 cells simultaneously. They attached the micropipettes to a simple, cheap, calibrated pump that generates fluid pressure to exert forces on the cells through the micropipettes. The team then used two computational models to describe how the deformations produced by the device reflect mechanical properties of the cells. The researchers showed that, consistent with previous findings, the stiffness of cultured metastatic breast cancer cells was lower than that of normal breast epithelial cells (Lab on a Chip, 15:264-73, 2015).


Future plans: Liu plans to develop a device to monitor mechanical cues in addition to pressure, to investigate how “multiple physical cues can orchestrate convergent mechanotransduction,” he says.

Problem: Changes to the biophysical properties of the nucleus, such as loss of nuclear envelope integrity and nuclear pore selectivity, are linked to aging and diseases such as cancer. However, it is difficult to reproduce these changes in the lab in order to understand how they regulate DNA stability.

Solution: To investigate nuclear deformation in cancer cells, Lammerding’s group fabricated a microchannel device with a series of posts that narrow the cross-section of the channel as the cells travel along. By applying a chemotactic gradient, the researchers could induce cancer cells to migrate through pores with cross-sections that ranged from 5µm2 to more than 20 µm2 in size. They tagged nuclear envelope proteins with green and red fluorescent markers and imaged the rupture of the nuclear envelope to determine how constriction affected the nucleus’s contents. Cancer cells pass through tight spaces in the extracellular matrix and between endothelial cells lining capillaries during metastasis, so Lammerding’s group used the tool to show that the DNA of cancer cells breaks as cells migrate through constrictions; the smaller the constrictions, the higher the probability of damage (Science, 352:353-58, 2016).

Future: Lammerding plans to further improve the tool’s throughput to allow assessment of DNA damage in hundreds of cells per run. His lab is also developing software to automate the analysis of the video data it gathers. 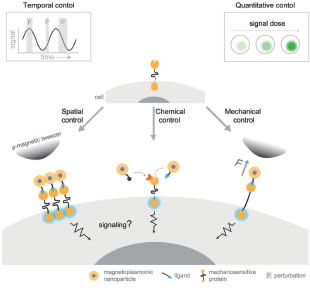 MAGNETO-MECHANICS: Magnetic nanoparticles bind to mechanosensitive targets on the cell membrane and exert forces on them in the presence of a magnetic field. The effects of such forces on cell signaling can be monitored at different times and with different force magnitudes.CELL, 165:1507-18Researchers: Zev Gartner, Associate Professor of Pharmaceutical Chemistry; Young-wook Jun, Associate Professor of Otolaryngology, University of California, San Francisco

Future plans: Jun hopes to apply the technology to other mechanosensitive proteins such as ion channels. Duke University neurobiologist Jörg Grandl, who developed a similar tool but was not involved in this study, hopes to see improvements in methods for adding labeled antibodies to the nanoparticles to better target specific mechanoreceptors and to control force amplitude, space, and time. He envisions using this technology to “mechanically probe a protein, domain by domain,” while analyzing the effects on protein properties and functions. 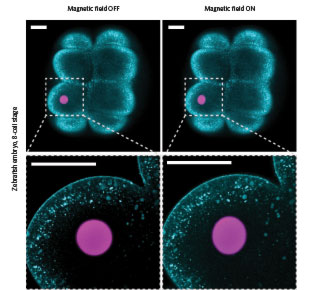 Problem: Mechanical forces in cellular microenvironments and their spatiotemporal variations are known to affect cellular behaviors such as migration, but there is no way to make direct in vivo and in situ measurements of such forces in tissues and organs.

Solution: The team created biocompatible microdroplets of ferrofluid oil—a suspension of magnetic iron nanoparticles—and injected single microdroplets into cells of early zebrafish embryos. To exert local and controlled forces within the cells, they then applied uniform magnetic fields to deform the microdroplets without exerting traction on them. Finally, they used high-resolution microscopy to observe tissue deformations in response to forces exerted by the shape change of the microdroplets, and estimated tissue mechanical properties by comparing the deformations of the tissues to a reference library generated from materials with known physical properties. Using the technique, they found that tissue stiffness in live, developing zebrafish embryos varies along the tailbud of the animals (Nat Methods, 14:181-86, 2017).

Future plans: Campàs is using his platform to study the mechanisms of tumor formation in multicellular spheroids and hopes to understand how abnormal biomechanics can cause or promote cancer and other diseases.

Andy Tay is a bioengineering graduate student in the lab of Dino Di Carlo at UCLA, where he uses and develops tools to probe the role of mechanics in cancer metastasis and neural stimulation.

Correction: The article incorrectly stated that pore sizes in the device designed by the Lammerding lab did not reflect actual capillary pore sizes. That statement has been removed from the article. The Scientist regrets the error.