MAGNETIC DETECTION: To identify bacteria by NMR, researchers first extract total RNA from bacteria and use PCR to amplify the 16S RNA as 16S DNA, one end of which can be captured by microbeads (1–3 μm in diameter) coated with a covalently bound DNA probe. DNA conjugated to magnetic nanoparticles (20–30 nm) binds to the opposite end of the target DNA, forming a magnetic DNA sandwich that can be detected by nuclear magnetic resonance (NMR)THE SCIENTIST STAFFWhen someone shows up at the doctor’s office with signs of an infection, chances are good that the physician will diagnose the ailment using methods that have changed little during the past century. After inquiring about symptoms, the doctor might collect a sample of blood, urine, or some other bodily fluid and send it to a clinical lab where it will be cultured and examined under a microscope. If bacteria are...

Depending on the microbe’s propensity to grow in culture and the amount of it present in the sample, it can take a day or longer for the lab to identify the pathogen, and an additional one to two days to get the antibiotic susceptibility results. But in many cases it can be impractical or risky for a clinician to wait for those results before initiating treatment. Therefore, he or she will make an educated guess as to the cause of the infection and might send the patient home with a prescription for a broad-spectrum antibiotic capable of ridding the body of a number of bacterial pathogens.

This practice means that doctors sometimes prescribe antibiotics when they are not necessary, potentially leading to harmful side effects and contributing to the emergence of antibiotic resistance. In other instances, when a bacterial infection is resistant to the empiric antibiotic therapy, delays in treatment with an appropriate antibiotic may increase the risk that the infection will worsen or spread to others. “If there were rapid diagnostics available, we could provide more-targeted treatments sooner, rather than later,” says Joseph Liao, associate professor of urology at Stanford University’s medical school and the chief of urology at the VA Palo Alto Health Care System in California.

To speed the diagnosis of infections, Liao and others are developing simple and inexpensive tests based on biosensors that convert the molecular recognition of a target molecule into signals that can be measured optically, electrically, mechanically, or magnetically. Well-known examples of commonly used biosensor-based assays include home pregnancy tests and handheld glucose monitors. Biosensor technologies for infectious diseases still need to clear significant regulatory hurdles before they can be used clinically, but they already show promise as portable and easy-to-use tools to rapidly identify a variety of pathogenic bacteria and to inform effective treatments. Here, The Scientist looks at three such technologies under development.

Technology: Using a miniaturized nuclear magnetic resonance (NMR) device created by Weissleder’s lab, Lee and Weissleder’s team developed an assay that can determine whether or not a sample contains virtually any species of bacteria or specifically identify 13 different bacterial pathogens in about two hours’ time (Nat Nanotechnol, 8:369-75, 2013). The researchers first isolate RNA from bacteria and use PCR to amplify a 50-70–nucleotide region of the 16S ribosomal RNA—either a region that is highly conserved among most bacterial species (for universal detection of bacteria), or a sequence that is unique to a particular pathogen of interest (for species-specific detection). Then they mix a sample of the PCR reaction with microbeads covalently coated with DNA probes 18–22 nucleotides in length that are designed to bind to one end of the PCR product. After washing away unbound DNA and beads, they add magnetic nanoparticles conjugated with DNA strands that bind to the opposite end of the PCR amplicon, forming a so-called magnetic sandwich complex with the bacteria-derived DNA in the center. “Eventually what we have are microbeads coated with these magnetic nanoparticles,” Lee says.

Application: The assay was able to detect as few as one or two bacteria added to a 10-mL sample of whole blood and also provided an estimate of the number of bacteria present in a sample. It also accurately diagnosed a variety of patient specimens—including lung fluid, pelvic abscess contents, urine, and bile—as either positive or negative for bacteria. In samples positive for bacteria, the assay correctly identified all of the bacterial species that could be detected by standard culture, as well as two additional species not detected by culture.

Other applications: Using a similar strategy, the group developed an assay for the detection of PCR-amplified DNA from Mycobacterium tuberculosis. The assay is performed on a microfluidic chip that handles the PCR, bead capture and labeling, and NMR detection steps (Nat Commun, 4:1752, 2013). In addition, the team has varied the molecules used for capturing and labeling to detect other molecules of interest besides bacterial nucleic acids. For instance, Lee and Weissleder detected cancer cells in patient biopsies using magnetic nanoparticles that glom onto antibodies bound to particular cancer-related proteins present on the cell surface (Sci Transl Med, 3:71ra16, 2011). 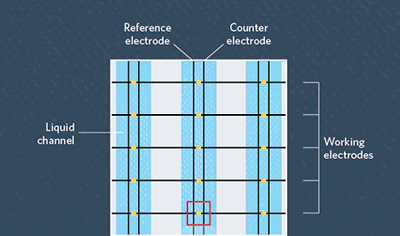 CLOSING THE CIRCUIT: In the electronic chip (top), a pair of reference and counter electrodes runs along the bottom of each liquid channel, and working electrodes are situated perpendicular to and underneath the channels; gold microelectrodes (yellow) rise up from the working electrodes and into the channels. Nucleic acid probes (orange, shown in a cross-sectional view of a single microelectrode, middle) immobilized on the microelectrode capture the negatively charged target DNA (navy), attracting cations and triggering redox reactions that generate an electrical current.
See full infographic: JPG | PDFTHE SCIENTIST STAFFResearcher: Shana Kelley, professor of chemistry, pharmaceutical sciences, and biochemistry, University of Toronto, Ontario, Canada

Technology: Kelley’s group developed an electronic chip that can rapidly detect DNA from 20 different bacterial species that frequently cause urinary tract infections and 10 different genes that confer antibiotic resistance. The chip features a pair of counter and reference electrodes running along the inner surface of each of five liquid channels. Each channel is further subdivided into five separate wells containing an electrocatalytic solution, and an array of 20 so-called working electrodes runs perpendicular to and underneath the wells. Bushy, gold microelectrodes sprout from the working electrodes and into each well, but remain electrically isolated from the counter and reference electrode pair.

Each well’s microelectrodes are coated with a nucleic acid-based probe designed to bind only to nucleic acid from a specific target pathogen or antibiotic-resistance gene. When a probe binds its target DNA sequence, cations in the electrocatalytic solution are attracted to the negatively charged phosphate backbone of the nucleic acid. The ions in the solution then undergo a series of oxidation and reduction reactions, generating a current that flows between the working electrode and the pair of counter and reference electrodes in the well. The resulting electrical signal in each well can be measured using a simple device called a potentiostat.

Application: The chip was able to detect DNA from bacterial lysates containing as little as one bacterial cell per μL. What’s more, the electrical signal could be detected after only a two-minute hybridization between the sample and the probes (Nat Commun, 4:2001, 2013). 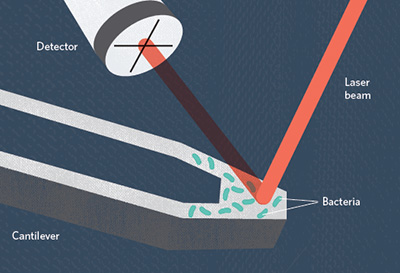 Technology: Using a tiny diving board–like device called a cantilever that’s traditionally used in atomic force microscopy (AFM), Longo’s group devised a way to rapidly determine bacterial resistance to antibiotics. The researchers coat a chemically treated cantilever with living bacteria and immobilize one end of it inside a chamber filled with bacterial growth medium. The bacteria cause the free end of the cantilever to vibrate at a certain frequency as they move and carry out ordinary metabolic functions. Those nanoscale vibrations are monitored using a laser beam that reflects off the surface of the cantilever and into a detector.

Upon exposure to an antibiotic, the fluctuations caused by antibiotic-susceptible bacteria grind to a halt within a matter of minutes, and do not recover in the presence of fresh growth medium without the drug. By contrast, the fluctuations caused by bacteria resistant to the antibiotic initially stall in the presence of the drug, but gradually resume as the bugs ramp up the molecular pathways they need to survive the treatment.

Application: Longo’s team demonstrated that lab-grown cultures of antibiotic-sensitive Escherichia coli and Staphylococcus aureus—two of the most common human pathogens that are rapidly developing resistance to many available antibiotics—cease to produce fluctuations of the cantilever within five minutes or less after antibiotic treatment. By contrast, fluctuations caused by antibiotic-resistant strains of the same microbes resumed within 15 minutes of antibiotic exposure (Nat Nanotechnol, 8:522-26, 2013). Although the tests were performed on a traditional atomic force microscope, which can cost hundreds of thousands of dollars, Longo says his team has developed simplified prototype versions of the instrument for $5,000–$10,000 that are designed specifically for antibiotic susceptibility testing and that don’t require expertise in AFM to operate.