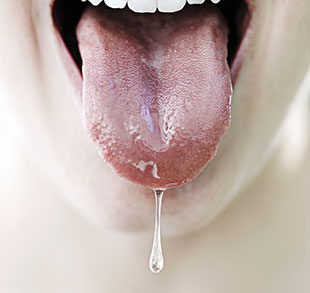 © DAVID TROOD/GETTI IMAGESHealthy adults secrete roughly 1 to 1.5 liters of saliva each day from three major pairs of glands that are in close contact with the bloodstream. Mostly water, spit also contains electrolytes and proteins, including glycoproteins that form mucus, enzymes that break down food and bacteria, and secretory antibodies.

Besides maintaining our oral health, saliva harbors clues about our ancestry and whether we might be fighting an infection, are overstressed, or have a hormonal imbalance. In the future, the watery fluid may even provide a rapid screen for a recent heart attack or distinguish between bacterial and viral infections. Indeed, characterizing the oral microbiome, the collection of all of the microorganisms in a person’s mouth, and its potential links to health and disease is its own emerging field. (See “The Body’s Ecosystem,” The Scientist, August 2014)

Researchers are probing saliva for genes, microRNAs, and protein markers associated with a wide variety of diseases.

Although saliva is easier and cheaper to collect, store, and transport than blood, studies of the fluid and the development of new saliva- and oral-based diagnostics are not necessarily simple. Planning around the analyte of interest should take into consideration the myriad collection tools now commercially available, as well as suitable processing, stabilization, and freezing strategies. These factors can affect your results, especially if you’re aiming for quantification.

The Scientist talked to saliva experts about their cuspidor of tricks. Here’s what they told us.

SAMPLE TYPES
Whole-mouth saliva. This is salivary fluid and all the extras: cells from the mouth, nasal mucus, blood from any tiny mouth or gum sores, microbiota, and food debris. It is collected by spitting or drooling into a tube. To increase yield, you can stimulate saliva production mechanically by chewing on something that doesn’t interfere with an assay, such as unflavored gum, wax, or silicon tubing. Even more saliva is produced by adding citric acid to gum, mouth rinses, or candy.

Mucosal transudate and gingival crevicular fluid. These fluids feed into spit but are generally better reflections of the blood constituents than whole-mouth saliva, says Daniel Malamud, professor of basic science and of craniofacial biology and director of the HIV/AIDS Research Program at the New York University College of Dentistry. In addition, the fluids are a good source of IgG antibodies, of which there are limited amounts in the mouth. For example, the FDA-approved OraQuick ADVANCE Rapid HIV-1/2 Antibody Test collects antibodies in the mucosal transudate—an ultrafiltrate of blood that passes through the mucosal surface of the cheek and palate—by swabbing the upper and lower gums using a flat, absorbent pad. Gingival crevicular fluid is contained in the crevice between tooth and gum. “You can collect that fluid on a paper point,” Malamud says. “Although it’s only a few microliters, people can do biochemistry on that.”

WHAT CAN YOU ANALYZE?
DNA. Characterization of the DNA found in epithelial and white blood cells present in spit is one of the most active areas of saliva research. Investigators are probing saliva for genes associated with cystic fibrosis, autism, and other disorders. Oasis Diagnostics, for example, has validated the DNA•SAL collection device for research on a variety of genetic diseases and predispositions, such as Gaucher disease, thalassemias, and cardiovascular disease, Slowey says. 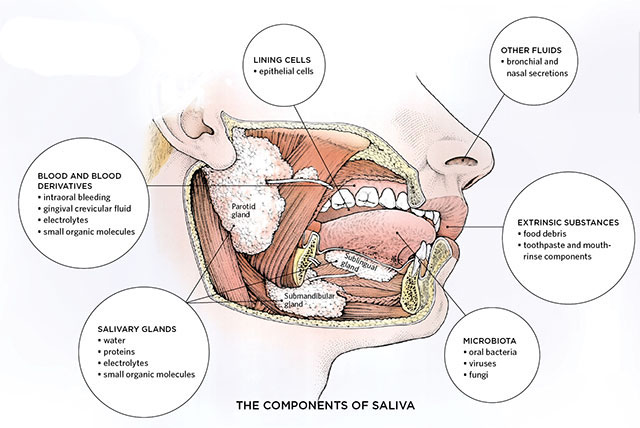 Many companies that sell collection tools also offer extraction kits that are customized for preserved saliva samples (see below). A protocol for extracting DNA from saliva for analysis with next-gen sequencing is available in Journal of Visualized Experiments (doi:10.3791/51697, 2014).

RNA. RNA holds promise for probing more than oral disease. David Wong and his team at the University of California, Los Angeles, have recovered extracellular RNA from saliva, linking certain of those RNAs to the presence of oral and other cancers. Wong’s method for profiling salivary microRNAs, a type of noncoding RNA in cell-free saliva, is available in Methods Mol Biol, 936:313-24, 2013. Wong has developed a collection tool (for nucleic acids and proteins) called RNAPro•SAL, which is sold by Oasis Diagnostics. It works by compressing an absorbent pad soaked in a proprietary medium to remove cells and other debris from the sample. Other researchers have developed methods for isolating RNA from the cells present in saliva (Clin Chem, 59:1118-22, 2013).

Much of the RNA in saliva comes from microbes in the mouth. A study by Wong’s group found that an additional low-speed centrifugation step, and boosting sequencing depth, helps minimize interference from microbial RNA (Clin Chem, 58:1314-21, 2012).

Peptides and proteins. About 30 percent of proteins found in blood are also present in saliva. The list includes cytokines, hormones, growth factors, and antibodies. Researchers are evaluating salivary proteins as potential markers of system inflammation, Alzheimer’s, and diabetes. Proteins, along with RNA, are especially sensitive to degradation by enzymes and to different collection methods.

HOW DO YOU COLLECT IT?
There’s no universal method for collecting saliva; it depends primarily on the age of the participant and your plans for analysis. But the way that you collect saliva, both the sampling location in the mouth and the time of day, can matter. “If there’s differences in collection [and processing] it will make it challenging to compare results across different labs,” Wong says. That’s especially important if you are studying biomarkers that you hope will be clinically useful, he adds.

Passive drool (in which the participant allows saliva to collect on the floor of the mouth, then leans forward and dribbles into a tube) is considered the gold standard of collection methods across different analytes. However, it requires compliance from patients and might even be difficult for some adults.

Researchers whose study subjects are preterm and newborn babies collect saliva via suction, a normal procedure for a neonatologist, but one that is becoming more accessible to other clinician researchers with the development of Pedia•SAL, a device that connects with a pacifier but that doesn’t require suction by the infant to work, says Jill Maron, associate professor at Tufts University School of Medicine. For older babies and toddlers, Salimetrics makes tools for collection that work even when participants are not cooperative.

Many collection tools work by absorbing saliva. It’s crucial to find out whether a given tool has been validated for your molecule of interest. “We know that when you absorb a saliva sample through any kind of a foam or cotton product, you change that sample’s integrity in ways that may or may not be known. Depending on what you’re interested in testing, you may or may not be able to use that sample,” says Douglas Granger, director of the Institute for Interdisciplinary Salivary Bioscience Research at Arizona State University and founder of Salimetrics.

In a 2013 study, for example, researchers compared protein profiles of saliva collected using passive drool, paraffin gum, or a commercially available cotton swab. The total protein concentrations the researchers obtained across the samples were similar; however, the protein profiles themselves were somewhat distinct, especially the profile of saliva collected via the swab (Clin Chim Acta, 419:42-46). It’s best to choose the commercial collection device carefully, and to keep collection methods consistent across multicenter studies.

HOW DO YOU ENHANCE COLLECTION?
The passive drool method usually produces enough sample, but if you need to stimulate saliva flow, a recent study of meat eaters shows that the smell of microwaved bacon enhances saliva flow without interfering with hormone concentrations (Clin Ther, 37:515-22, 2015).

Besides a whiff of bacon, there are lozenges, mouth rinses, and chewing gums that you can use if you need to stimulate saliva production. Make sure you have established that the method you’re interested in using for saliva stimulation doesn’t interfere with your ability to detect your analyte of interest. Mouth rinses, for example, will dilute your sample, Malamud says.

Also, be warned: “There’s a difference between nonstimulated saliva, which is just spitting it in a cup or collecting it with a tool like ours, versus stimulated saliva,” Slowey says. Altering your flow rate may change the concentration of certain analytes more than others.

HOW DO YOU ACCOUNT FOR DIFFERENCES IN FLOW RATES?
Besides the stimulation of saliva, many different factors (such as age, exercise, smoking habits, alcohol use, time of day, and overall oral health) affect the flow rates of saliva. Accounting for differences in individuals’ saliva flow rates can be important if you’re collecting quantitative data. Some researchers directly measure a person’s saliva flow rate: the volume of saliva collected (measured using a pipette) divided by the time it took to produce the amount.

Another way to circumvent differences in flow rates is to use a device aimed at collecting a fixed amount of fluid. Vivek Shetty at UCLA and his collaborators developed such a device, which collects 100 μL, and are selling it through the Japanese company Nanbu Irika for $10 per device (or $280 for 30 devices).

Internal controls are also important when you’re adjusting for differences in flow rates or variations in sample quality. Total protein concentration is one approach; a small panel of RNA markers is another. Check to see if anyone has measured your analyte of interest, and whether there are any validated references.

HOW DO YOU PRESERVE IT?
Saliva contains enzymes that can rapidly degrade your analyte. Some analytes, such as cortisol or melatonin, are more stable at room temperature than others. But in general, it’s a good idea to chill saliva in the fridge immediately after collection, and “clean it up” before you freeze it, Slowey says.

The particulars of purification depend in part on whether your molecule resides inside or outside of the cell, but there are commercial extraction kits available for either option. For extracellular RNAs, researchers spin cells down and analyze or freeze only the supernatant. Researchers studying human DNA, on the other hand, use the pellets of cells, lysing them and employing spin columns that bind genomic DNA and allow the rest to wash off.

Stabilizing buffers (sold by Norgen, Qiagen, and others) help neutralize enzymes that can degrade DNA and RNA. If you can’t get samples to a freezer right away, then these reagents (such as Qiagen’s RNAprotect Saliva Reagent) can help. DNA Genotek’s Oragene family of kits for the collection of human DNA and RNA in saliva contains preservatives that allow researchers to store samples at room temperature.

For those researchers interested in microbial DNA and RNA, DNA Genotek’s OMNIgene Discover kits for microbial DNA and RNA (OM-505) or DNA only (OM-501) are also ideal for long-term storage, notes David Speicher, a researcher at Griffith University in Queensland, Australia, who has studied extraction and storage methods.

HOW LONG CAN YOU FREEZE IT?
A –80 °C freezer can preserve saliva for a long time, but for a given analyte, the limits are untested. Recent evidence from Speicher suggests a note of caution: salivary DNA with no stabilizing solution, stored at –80° for 14 months with no freeze-thaw cycles, is partially or completely degraded (Diagn Microbiol Infect Dis, 82:120-27, 2015).

As a general rule, aliquot your samples to minimize the freeze-thaw cycles. “We always suggest that samples are kept cold after they’re collected and that the cold chain is managed very thoughtfully until they can be frozen,” Granger says.

And if, after reading the many reviews now available on saliva collection and processing, you’re still lost, then pick up the phone and call someone who’s been doing what you aim to do. “Most scientists are more than happy to talk,” Malamud says.