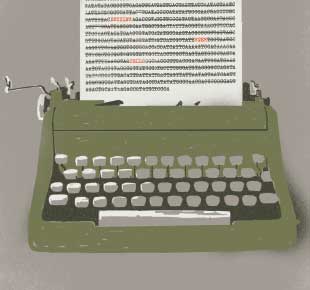 © BRYAN SATALINOThe past decade has seen the birth of two incredibly useful biological tools, and now scientists are beginning to marry them. The first is human induced pluripotent stem cells (iPSCs). Nobel Prize–winning advances, beginning with mice in 2006 and subsequently in humans, showed that it was possible to revert adult skin cells to pluripotent stem cells, which can in turn be coaxed to become nearly any cell type. These cells are the cell-scale embodiment of a person’s genome, and provide researchers with the ability to create cell types that would be otherwise impossible to cull from the living body. iPSCs offer powerful new ways to model monogenetic and complex human diseases and to tailor cell-based therapies.

The second tool is the CRISPR-Cas9 system, which allows easy and precise editing of any region of the genome. When it comes to traditional immortalized cell lines, such as HeLa...

Together, these techniques are more than the sum of their parts. CRISPR’ing human iPSCs allows researchers to manipulate genes to study their functions in the context of specific diseases, or to correct genetic defects in patient cells. One challenge that seamless gene editing helps address is the genetic variability across different iPSC lines that has prevented researchers from directly comparing them; CRISPR-Cas9 allows researchers to make new control cells for a particular individual that differ by only a single nucleotide.

Although both CRISPR-Cas9 and human iPSCs have become commonplace in the lab, it’s not necessarily easy to unite the two. Researchers who want to study gene function are finding that human iPSCs can be difficult to maintain in culture and to manipulate with CRISPR, says Chad Cowan of the Harvard Stem Cell Institute in Cambridge, Massachusetts.

The Scientist talked to experts who use both tools, and put together this basic guide on what to expect when you’re CRISPR’ing human stem cells, advice that applies to both human embryonic stem cells (ESCs) and iPSCs.

To transfect the cells with the guide RNA and the Cas9 (or related/derivative) nuclease, electroporation is the dominant delivery method, because it allows researchers to get large amounts of DNA and protein into the cells’ nuclei while keeping them alive. There are automated benchtop systems such as Lonza’s Nucleofector device and kits or ThermoFisher Scientific’s line of Neon Transfection system products available. Try to avoid lentiviral delivery at all costs—in part because human pluripotent stem cells can naturally silence genes delivered this way—except for high-throughput cell screens, says Mohammad Mandegar, a postdoctoral researcher in Bruce Conklin’s lab at the Gladstone Institute of Cardiovascular Disease.

Antibiotic resistance is one way to select colonies that harbor your modification. Researchers use resistance in combination with a fluorescent reporter and fluorescence-activated cell sorting (FACS) to enrich for transfected cells. These cells are then expanded on single- or multi-well plates.

Investigators routinely assess pluripotency by tracking cell morphology, pluripotency markers, and the cells’ capacity to differentiate. Karyotyping—typically done every 10–20 passages or after any manipulation including gene editing—ensures that the cells have the normal number of chromosomes. iPSC lines are widely available for purchase, and many core facilities and companies derive iPSCs as a service. Protocols are plentiful, too. Bottom line: find the methods that work for you, and make sure you have a good mastery of the cells before you begin editing, says cell biologist Dirk Hockemeyer of the University of California, Berkeley. 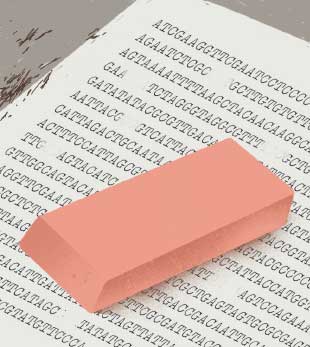 © BRYAN SATALINOTry CRISPR-Cas9 tools in a human cancer cell line first. When you’re ready to move into human pluripotent stem cells, keep in mind that human iPSCs are much more labor-intensive, finicky, and expensive to maintain. (See The Scientist, April 2013, “Pluripotent Until Needed.”)

An experienced researcher can take about a month to learn the basics of human iPSC culture. Even then, because new protocols and reagents surface regularly, working with these cells is a constant learning process, says Susan Byrne, a postdoctoral researcher in the Harvard Medical School laboratory of George Church. Adds Cowan, “I tell undergraduates that within six months, you’ll be an expert once you begin working with these and have the right mentorship. But people tend to [initially] underestimate that.”

Keep in mind that each stem cell line is unique, a quality that affects your ability to culture the cells and target them with guide RNAs. “The variation we see depends on the individual donor and reprogramming method,” Byrne says. “Sometimes we have to optimize the protocol for a particular stem cell line.”

In general, even with a healthy cell line (i.e., one that clones and freeze-thaws well) and with your maintenance protocol perfected, you should expect 10-fold lower efficiency incorporating edits into human iPSCs and ESCs compared with cancer cell lines, says Linzhao Cheng of the Johns Hopkins School of Medicine.

Getting to know your gene

Study your gene locus to understand those sequences that are likely to be transcribed and to strategize the best possible alteration. For example, it’s possible that even a disrupted gene still shows some biological activity after editing. In that case, you might consider a double cut in order to excise a larger region, Byrne says.

Choose several guide RNAs and test them empirically. A spate of software is available for selecting guide RNAs. But keep in mind that even a specific guide RNA might not work well, or at all. One simple, overlooked reason stems from the fact that you may not have a reference genome on which you can base your guide design. In addition, you’ll need to consider optimizing the guide’s activity, says bioengineer Prashant Mali of the University of California, San Diego. A paper published by his group last year in Nature Methods presents general design rules for selecting active guide RNAs (Nat Methods, 12:823-26, 2015).

Knocking out versus precision editing

When you use CRISPR-Cas9 to cut a gene, two major molecular pathways step in to perform DNA repair and ultimately determine the fidelity of the subsequent edit. Both repair pathways occur at the same time. The pathway used for knocking out genes, called nonhomologous end joining (NHEJ), creates small insertions or deletions in the DNA that disrupt the gene’s function. The other, homology-directed repair (HDR), creates precise nucleotide changes based on a stretch of donor DNA.

Researchers using conditions that favor HDR over NHEJ report that the edit fares worse in human pluripotent stem cells than in traditional immortalized cell lines, introducing the correct alteration in only 1 out of 100 transfected iPSCs in a given experiment. It’s a major challenge in the field, but Hockemeyer says that his group can manage. “If you have a very good tissue-culture workflow, that only means in order to get 2 clones, you have to pick 200. A student can do that within 3 hours,” he says.

Hockemeyer and others are working on new strategies to tip the scales toward HDR, for instance, by applying specific chemicals or using Cas9s from different species. “I think that it’s completely reasonable that we—meaning our lab plus the field—will have solved this issue in the next few years,” he says.

Conklin’s group has developed a rapid digital PCR–based test to quantify the rates of HDR and NHEJ repair, finding in several cell types—including human iPSCs—that the two rates did not correlate with one another (Sci Rep, 6:23549, 2016). That suggests that it would be wise to measure both rates rather than one, especially when aiming for HDR. (HDR efficiency rates in iPSCs were less than 0.2 percent in this study.) 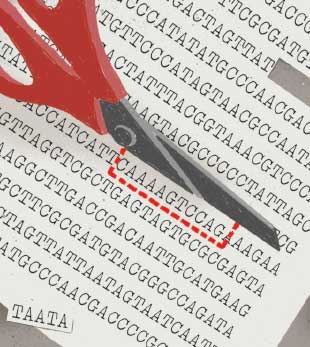 © BRYAN SATALINOBefore or after differentiation, depending on your question, measuring or observing a specific cell phenotype—such as its shape or the presence of particular markers—is the most basic way to verify you’ve made the cut in the right place. Supplying your edited cells with DNA complementary to your edited gene should rescue that phenotype. If your cell phenotype is too subtle to measure a change, you could try making a second edit in the gene that would restore it to wild type, Hocke­meyer says.

Sequencing all of the protein-coding genes, or the exome, may well become the method of choice for verifying edits. “[Sequencing is] probably the most complete analysis of your system. It’s an investment you’re going to want to make if that’s going to be the cell line you’ll use for the next 10 years. You need to make sure it’s perfect,” Mali says.
On the other hand, keep in mind that there will be genetic differences that accumulate over time, no matter the cell line. “We cannot argue those away,” Hockemeyer says.

One major way to prevent off-target edits is to use at least two or more sufficiently different guides designed to target the same spot, which makes it nearly impossible that both would give you the same off-target result.

In general, off-target effects should not be a major concern, at least for most basic researchers, Cowan says. It turns out that off-target effects occur much less often in human pluripotent stem cells than in cancer cell lines, Cheng says. But if you are really concerned, then whole-exome sequencing may be your best bet, he adds.

Controlling genes instead of editing them 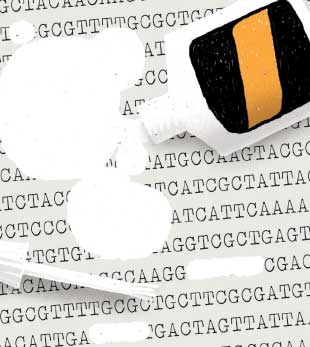 © BRYAN SATALINOIf you had hoped to knock out a gene that is essential for pluripotency in your pluripotent stem cells, then obviously you’re out of luck. You won’t be able to get much done with dead cells. In this scenario, you’re better off turning gene expression down (or up), and an expanding CRISPR-Cas9 tool set is available for this purpose. These make use of a “dead” version of Cas9, which binds to a predetermined place in the genome but does not cut DNA. Instead, different variations of dead Cas9 can either inhibit transcription—these are called CRISPR interference or CRISPRi—or they activate it (CRISPRa). (See The Scientist, March 2016, “Dial It Up, Dial It Down.”)

A recent study found that for loss-of-function screens in iPSCs, CRISPRi was more efficient than traditional CRISPR—silencing the gene of interest in 95 percent of the cells, compared with CRISPR-Cas9, which shut off the gene in only 60 percent to 70 percent of cells (Cell Stem Cell, 18:541-53, 2016). That’s because CRISPR-Cas9 does not always cause a frameshift mutation (i.e., these mutations remain in-frame), which can leave the protein fully or partially functional. That said, success in silencing genes varies from one locus to another and one cell type to another, says Mandegar, the study’s first author.

The major difference between gene-expression control and gene editing is that, with control, you’re not permanently altering the genome. You can perturb the cells, for example, silencing the gene and then reversing that suppression. Also, off-target effects are even less of a concern with CRISPRi and CRISPRa than with CRISPR-Cas9 because of the narrower window in which guide RNAs operate in the former.

One challenge in regulating gene expression is that it is more difficult to select/design a solid set of guide RNAs, Mali says. Ideally, they would avoid the regions of the genome that are coiled tightly around nucleosomes, the protein spools that keep genes silent, but in some cases those are the very regions you’d like to target.

It is also more complicated to deliver CRISPRa and CRISPRi efficiently into human pluripotent stem cells. “It’s still really difficult to get it into 70–80 percent of cells unless you’re using a viral delivery method. You’re typically talking about 30–40 percent of cells,” says Cowen, who uses CRISPRa to activate and validate reporter genes. That’s helpful because in some cases it is difficult or impossible to differentiate an iPSC into a particular cell type—in his case, renal endothelial cells—to know that his reporter has worked.