Palm Clasp: DARPins, or designed ankyrin repeat proteins, consist of an N-capping repeat (green ribbon), many internal repeats whose number can be freely chosen (three shown here) (dark blue ribbon), and a C-capping repeat (cyan ribbon). The molecular model shows a classic DARPin library design. ANNU REV PHARMACOL TOXICOL, 55:489–511, 2015Antibodies are the immune system’s foot soldiers, the first line of defense against foreign invaders. With their unique arms that bind only to specific ligands, antibodies screen thousands of proteins to find the one that clasps perfectly.

This bit of biology also makes antibodies a powerful tool for detecting and capturing proteins in the lab. But they have some significant drawbacks. For one thing, it takes between six months and a year to develop lab-ready antibodies, and the process, which was developed in the 1970s and ’80s, often involves using animal hosts, such as rabbits, to generate the molecules....

Another issue is that there is no way to reproduce antibodies exactly, says Andreas Plückthun, a biochemist at the University of Zurich in Switzerland. “It’s the only reagent used in biology which is a black box,” he says. Most monoclonal antibodies—those made from cloned, identical cells—have never been sequenced, he adds. “It’s a leftover from a different time.”

To get around these challenges, scientists have developed an arsenal of tools that mimic antibodies—but without the baggage. These “mimetics,” such as DARPins, Affimers, and monobodies, can be produced in E. coli and offer more control, specificity, and reproducibility than traditionally manufactured specific antibodies.

A mimetic contains a stable scaffold that holds the molecule together and a variable arm that binds specific targets. For a particular scaffold, scientists can create a large combinatorial library of mimetics with billions of variable arms to ensure good coverage against most proteins in the cell, and then screen for ones that bind specifically to the protein of interest. Producing mimetics requires a significant investment, which is why only a few research labs and companies have constructed the necessary infrastructure. But the molecules are widely available for use.

Here, The Scientist explores how a few of the most popular antibody alternatives stack up against conventional antibodies—and each other.

What they are: First described in 2003, and perhaps the most widely validated antibody mimetic, designed ankyrin repeat proteins, or DARPins, are tiny proteins with masses of roughly 17 kDa—one-tenth that of antibodies. “They look like an open hand,” says Plückthun, who developed them in his lab. These tiny palms offer an extended surface for interaction with target proteins, he says, and enable a lock-and-key–type binding mechanism.

For the scaffold, Plückthun and colleagues use a so-called ankyrin repeat protein, a sturdy molecule that mediates tight protein-protein interactions in nature. Because DARPins have no cysteine residues—and therefore no disulfide bonds—they can easily fold inside the reducing environments of cellular interiors. This is why researchers can make them without eukaryotic cell culture, where disulfide bonds are typically added in the acidic environment of the endoplasmic reticulum. Instead, DARPins can be produced cheaply in E. coli, without the need to immunize animals, within a matter of few weeks, Plückthun says. He distributes DARPins characterized in his lab at cost, or researchers can purchase them from one of several companies (such as Creative Biolabs).

“I don’t see this as a cheaper alternative, but as extending the technology beyond antibodies,” says Plückthun. “DARPins have become extremely robust.” Members of his lab can generate binders against 96 different protein targets in parallel, and they typically generate 200–300 specific DARPins against every target. Overall, they have made and validated DARPins against 350 targets so far.

DARPins tend to be the most stable and sensitive of the mimetics, with some able to detect targets as small as 5–100 picomolar. They work extremely well for practically any protein that has folded domains. Plückthun notes, however, that antibodies may be better at detecting and binding denatured or unstructured proteins.

Uses: These palm-like binders have found widespread use in research, diagnostics, and therapeutics. In the lab, they have been used to tag and chaperone target proteins, to block protein function, and to facilitate standard pull-down assays. Due to their small size, DARPins can be genetically fused with fluorescent proteins and can be expressed in a variety of compartments in eukaryotic cells and in bacteria (Annu Rev Pharmacol Toxicol, 55:489–511, 2015).

DARPins can do everything an antibody can, but perhaps their greatest strength is in therapeutics. For example, two DARPins can be stacked like Lego blocks, with one end that recognizes proteins on tumor cells, and another that binds to coat proteins on tumor-killing viruses. Clinicians may one day use such stacked DARPins to chaperone therapeutic viruses directly to tumor tissues, in a therapeutic approach called “oncolytic viral retargeting.”

Affimers differ from DARPins in the way they bind their targets, says Darren Tomlinson, biochemist at the University of Leeds in the U.K. who led their development. Instead of DARPins’ hand-like structure, he explains, “Affimers have loop structures that can probe into the target as if with three fingers” (eLife, 6:e24903, 2017). 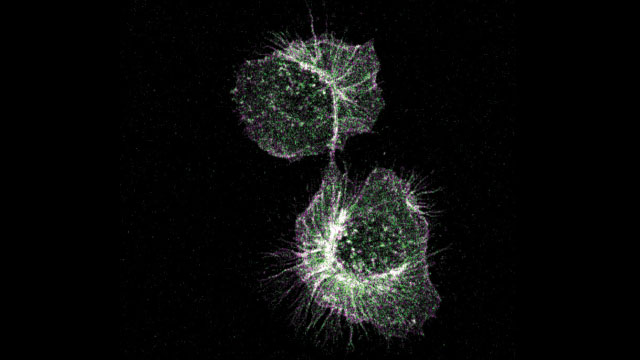 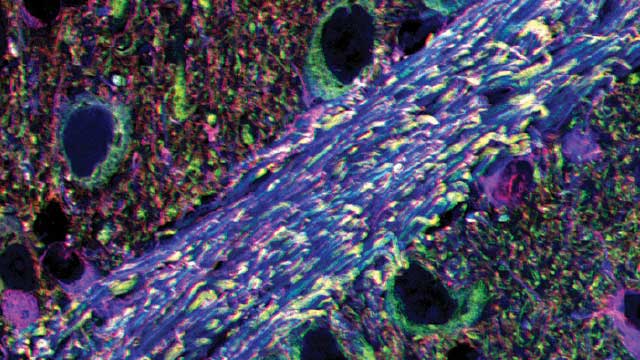 It only takes from 4–7 weeks to screen libraries of these loop-based mimetics to find specific targets, and typical Affimer binding affinity lies in the nanomolar range. Researchers keen to use Affimers can collaborate with Tomlinson’s lab or purchase them from UK-based Avacta, which commercially developed them.

Uses: Aside from standard antibody applications such as binding assays, Affimers can be produced directly inside cells to inhibit or activate protein function and to block specific post-translational modifications on target proteins. Affimers don’t just recognize proteins: they can even bind to small organic compounds and nonprotein-based metabolites.

Due to their small size, Affimers can be employed to track single particles using super resolution microscopy, a feat that no other mimetic so far can perform. At a length of 2–3 nanometers, Affimers pose no challenges at resolutions of 20 nanometers or less in super resolution microscopy. Their diminutive size also allows them to penetrate the smallest vesicles and label the most elusive of antigens in tissue samples.

What they are: Monobodies (trade name: Adnectins) are yet another class of synthetic binding proteins, which use the tenth fibronectin type III domain as the scaffold. At 10 kDa, the Fn3 scaffold is most structurally similar to natural antibodies, but with one significant difference: monobodies contain no disulfide bridges, allowing them to more easily fold in bacterial cells (Protein Sci, 26:910–24, 2017).

Once you have the cDNA, you know the exact sequence of your nanobody.
—Oleg Dmitriev,
University of Saskatchewan

Shohei Koide, a biochemist at the New York University School of Medicine, first created monobodies in 1998. Since then, monobody scaffolds have expanded to fill two distinct libraries. One offers a flat, palm-like binding surface, and the other forms a loop, like the three penetrating fingers of Affimers, providing greater reach into the target and subsequent tight and highly specific binding. It takes three to six months to produce a set of monobodies against a target protein, depending upon complexity, Koide says. These are not commercially available yet, but researchers can get them by collaborating with his lab.

Uses: “A key advantage of monobodies is they tend to hit functional sites of the target very often, although we do not program the probe to do so,” says Koide. They have high affinity and high selectivity in the picomolar range, and are often inhibitors of protein function, but can sometimes act as activators. This allows researchers to use monobodies not only to mark targets, but also to modulate cellular signaling.

What they are: In contrast to DARPins, Affimers, and monobodies, which are synthetic, nanobodies are actual antibodies that are produced in llamas, camels, and sharks. For some reason unknown to science, these animals make especially small antibodies—about 16 kDA—consisting only of heavy chains, which bind targets.

Unlike their synthetic cousins, nanobodies are obtained by immunizing an animal. From a llama’s (or alpaca’s) immune response, researchers can isolate total RNA from B cells to amplify nanobody cDNA and create a library. This large cDNA library encodes many different nanobody variants, of which scientists can select a few with high binding affinity, often in pm ranges, in about three months’ time. Researchers can access nanobody libraries through one of several companies, such as Belgium-based Ablynx, or through labs that make them, such as that of Serge Muyldermans at the Vrije Universiteit Brussel in Belgium (Annu Rev Biochem, 82:775–97, 2013). 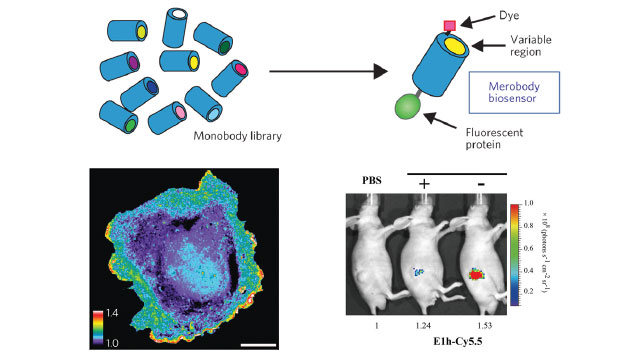 MONO MODULATORS: Monobodies can be used for both in vitro and in vivo imaging. Top left: schematic of the monobody library binders against Src family kinases (SFK); top right: biosensing mechanism of the SFK-targeting monobody. Bottom left: ratio image of a cell microinjected with the monobody biosensor (scale bar: 20 μm). Bottom right: in vivo targeting of the monobody seen in a nude mouse model of prostrate cancer.ANNU REV ANAL CHEM, 10:293–320, 2017
“Once you have the cDNA, you know the exact sequence of your nanobody,” says Oleg Dmitriev, a biochemist at the University of Saskatchewan in Canada. “If you decided, you could tweak its specificity by going back to the cDNA library and doing new selection rounds. That’s not very common with monoclonal antibodies.”

To improve availability and to get around the development time needed to create nanobodies, researchers have recently developed a synthetic yeast platform, bypassing the need for animal immunization completely. Although there are some concerns about the specificity of synthetic nanobodies, this library is freely available to academic researchers upon request from Andrew Kruse’s lab at Harvard Medical School in Boston or from Aashish Manglik’s lab at the University of California, San Francisco (Nat Struct Mol Biol, 25:289-296, 2018).

Uses: Aside from standard uses to track and perturb protein function, nanobodies are especially handy in coaxing temperamental proteins to crystallize. Over the past decade, protein crystallographers have included nanobodies in their bag of tricks because these affinity reagents can pin down highly dynamic proteins, stabilize their flexible regions, and shield hydrophobic surfaces on membrane proteins—all key steps in crystal formation.